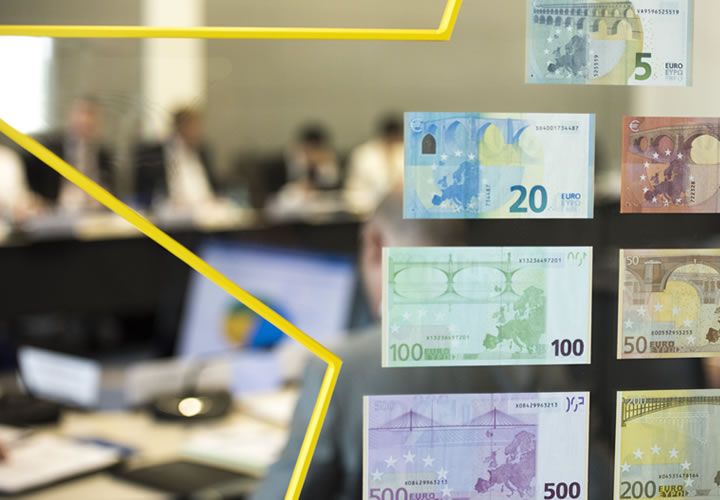 The market is underestimating the impact of tax reforms on the Dollar and is too upbeat about Eurozone growth say strategists at a leading investment bank.

The Euro-to-Dollar exchange rate will travel a U-shaped trajectory in 2018 according to forecasters at Bank of America Merrill Lynch suggesting a decline into mid-year followed by a recovery into year-end.

This goes against the more unambiguously bullish market consensus for the pair, which sees the Euro outpacing the Dollar for pretty much most of the year, although even the consensus indicates the second half (H2) is likely to be more bullish, owing to easing political risks and more aggressive unwinding of stimulus by the European Central bank (ECB).

The difference is that BofA has stuck their neck out and called a downright fall to 1.10 in H1 - which is a considerable decline from the current market rate of 1.2056.

What has prompted them to adopt such a bearish outlook in the first half of the year?

The main reason is a misapprehension about the impact of US tax reforms.

The market has ignored or downplayed the growth potential of tax cuts. Companies it has been argued will use the extra cash for non-growth activities such as share buybacks, savings, and M&A activity, but according to BofA this is an exaggeration and, in fact, US GDP will gain a significant boost from tax cuts.

"We see two main reasons why the US tax reform will support the USD in early 2018. First, adding fiscal stimulus to an economy that is already at full employment and the central bank is hiking. Second, repatriation, as money comes back to support the US economy, with some having to be converted from non-USD currencies," say BofA's FX Strategist's Athanasios Vamvakidis and John Shin.

A more contested point is the impact of repatriation flows on the US Dollar: estimates of the percentage of earnings abroad which are already denominated in Dollars, and will therefore not impact directly on the exchange rate, have varied from 25% to 90%.

BofA position themselves somewhere in the middle arguing that based on their corporate surveys about 40% of overseas profits are in Dollars, which suggests a considerable potential impact on USD from repatriation.

Comparisons with the Homeland Investment Act (HIA) in 2005 have tended to be negative, suggesting the repatriation flows from the newer legislation will be smaller because of timescale incentive differences, however, BofA points out that the gross lump sums are much bigger in 2018 than they were in 2005:

They foresee the impact on the Dollar as at least equitable to 2005, when EUR/USD fell by 12.6% in a year, and though much has been made of the fact that the Federal Reserve was hiking interest rates at the same times as the HIA came into force in 2005 and this could have motivated the rise in the Dollar instead, the same can be said for 2018.

"Market expectations are too low. Our survey data suggests that the consensus expects a very limited impact from the tax reform. Our recent client meetings confirm market skepticism about whether the US companies will repatriate significant amounts and the extent to which this money is not already in USD."

BofA's survey evidence, however, makes a case for a greater impact than markets are currently expecting. 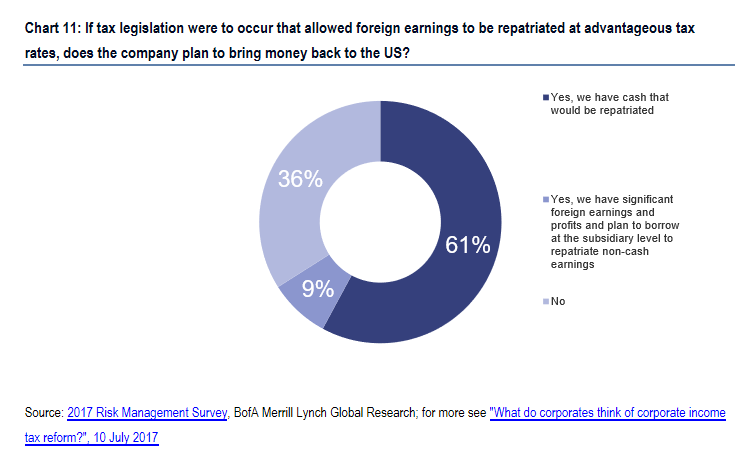 "Our survey data suggests that corporates will repatriate, despite not having to do so to benefit from the lower one-off tax rate," says Vamvakidis, who adds that 90% of firms answered that they would be repatriating some money and that they would be actively doing something with it rather than just keeping it in 'cash'.

The new legislation also provides longer-term incentives for repatriation since profits from abroad will not be taxed on re-entry and therefore not taxed twice, as was the case in the past. 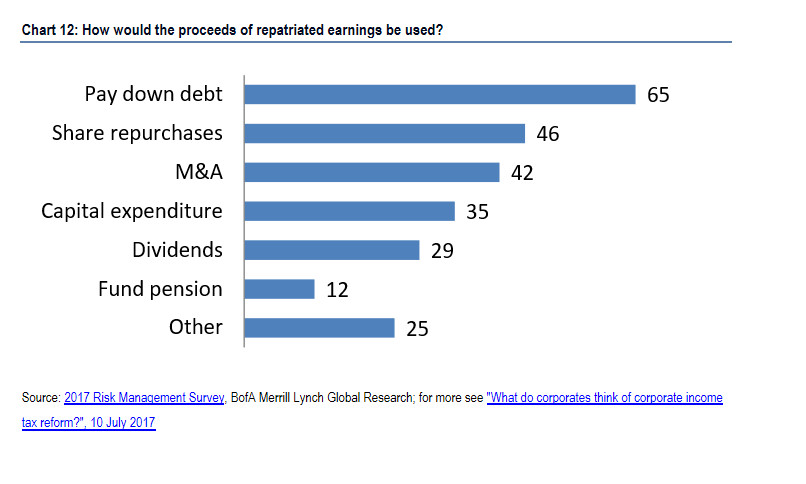 The 'karmic' backflow of overseas booty combined with mostly lower tax rates all round will also help pump up flagging inflation, and this should be a further driver of US Dollar appreciation, according to BofA.

Current expectations remain subdued with market-based valuations suggesting the Federal Reserve (Fed) will raise interest rates twice in 2018, which is below the Fed's own expectations of three rises, and too low according to BofA, who like the Fed also expect three rises.

The Dollar could well receive a boost, therefore, if market expectations adjust more in line with Fed expectations - and possibly even above, if as BofA's Vamvakidis says, there is a material chance of four hikes in 2018.

Tax cuts and repatriation flows should benefit overall economic growth and BofA economists forecast US GDP to rise by 2.4% in the US - up from 2.2% in 2017.

This will contrast, however, with Euro-area growth which they see stuttering to 1.4% in 2018 - down from 1.6% in 2017; with the divergence reflected in the lower exchange rate.

Give Them Some Credit

Financial conditions, which refer the availability of money for businesses and individuals to borrow, also supports a higher inflation outlook in the US than the Eurozone, where conditions are tighter as compared to the former. 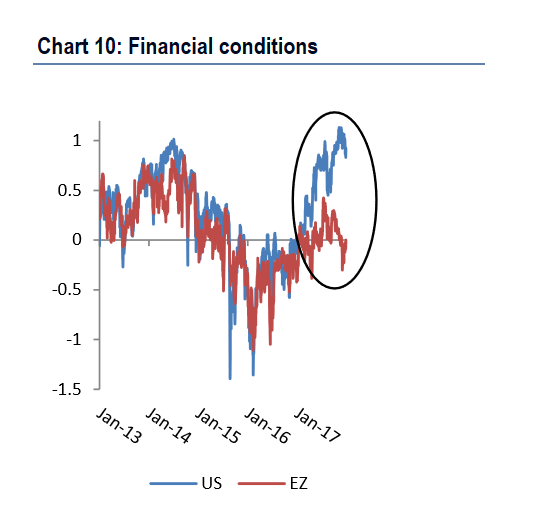 The tightening of credit in the Eurozone is likely to have negative repercussions on growth in 2018 as the Euro-area more than any other G10 currency jurisdiction is unusually sensitive to the availability of credit, or lack of thereof.

"The Eurozone recovery is creditless. This is a problem, as empirical evidence suggests that creditless recoveries are usually weak and fragile. The correlation of credit with growth is the strongest in the Eurozone among G10 economies." Says Vamavakidis.

This is probably to do with delays in cleaning up bank balance sheets after the accumulation of bad debts during the financial crisis. 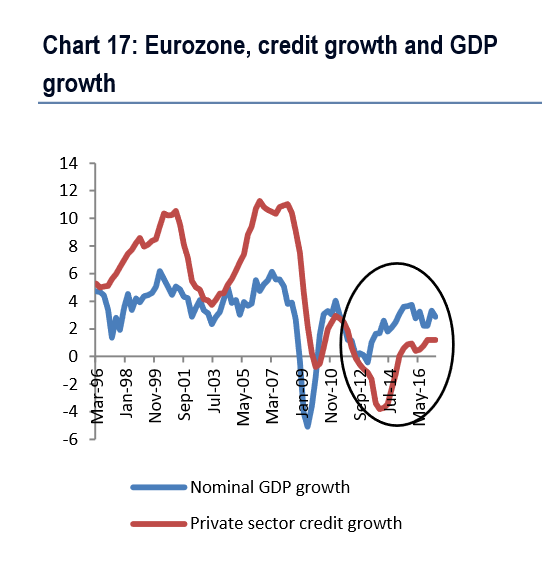 Another more familiar weight which will hold down the Euro in H1 is political risks associated with both the German and Italian elections.

In Germany there is still a lacuna of government due to the inabilities of the various parties to agree to a coalition, whilst Italy poses the risk of a completely anti-Euro party getting into power in the form of Pepe Grillo's Five Star party, although, the actual chance of this leading to a crisis in the membership of the Euro is very low.

"Germany still does not have a government." says Vamvakidis adding, "The latest polls suggest that political paralysis could continue or even worsen following another election."

Meanwhile, Italy poses a clear and present political risk in H1 as the elections are set for the spring.

"We expect Italy to have elections in H1, most likely in March. The best outcome is a weak government coalition, with tail risks if there is a need for a second election, or if Five Star is able to form a government," says BofA.

It is not all bad news for the Euro in 2018, however, and BofA expects a recovery in H2 to take the EUR/USD exchange rate back up to more or less the level it is at now.

Of course, by H2 most of the political risk associated with Italy and Germany will probably be resolved and the Euro will gain a boost from having a heft risk premium lifted from its shoulders.

The main driver in H2, however, will be the actions of the ECB which will start to deleverage more aggressively at that point, reducing its stimulus programme - effectively bringing money printing to an end in the Eurozone - and probably hinting at when it will start raising interest rates.

"We expect EUR to strengthen later in the year, as the ECB ends QE, confirming that the program is not open-ended, and the market starts expecting hikes to follow in 2019," says Vamvakidis.

For BofA EUR/USD's 'equilibrium rate' is actually at around the current market rate of 1.20 and this is where they forecast EUR/USD ending 2018.

This, they also point out, is in line with historic correlations with the balance of the current account. 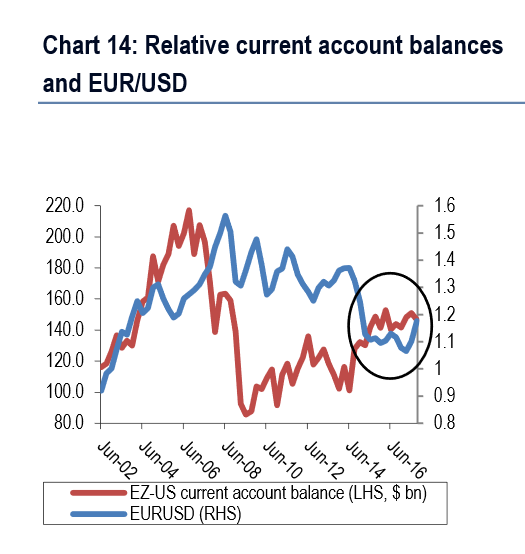