A trend of appreciation in the British Pound against the Euro looks set to remain intact provided the divergence between central bank policy in the UK and EU extends and a multi-month bull trend in stock markets remains intact, say analysts.

The Pound-to-Euro exchange rate (GBP/EUR) has appreciated in value from 1.0752 back in March 2020 to a high at 1.1833 reached just over a week ago in a trend interspersed by periods of volatility.

Most recently, the GBP/EUR exchange rate retreated from highs towards 1.1833 back to 1.1714, leading this publication to field questions from readers as to whether a turning point in the broader trend of appreciation was at hand.

On the point of volatility, data and experience shows GBP/EUR tends to decline during by bouts of souring market sentiment.

Note that the 2020 lows came on the back of a market panic and since then periods of stock market losses have seen declines in the GBP/EUR exchange rate.

Should the broader bull run in equity markets continue then Pound can benefit against the Euro, but should a major turning point for markets occur due to a shock then the Euro could rally rapidly, in line with its growing status as a fully signed-up member of the safe-haven club of currencies.

"The combination of fiscal and monetary stimulus, the reopening of the economies, pent-up demand – be it more now for services than goods – and excess saving are all contributing to the rebound," says Kingswood, an asset manager with £6.1BN under management.

In a quarterly investment outlook note Kingswood warn that global growth is however likely to slow considerably from the current very strong pace, as the reopening and fiscal boosts fade, but it should remain well above trend into the first half of next year.

"Of course, risks remain. Most obviously, the continuing spread of the virus poses the threat of more vaccine-resistant variants emerging," they add. 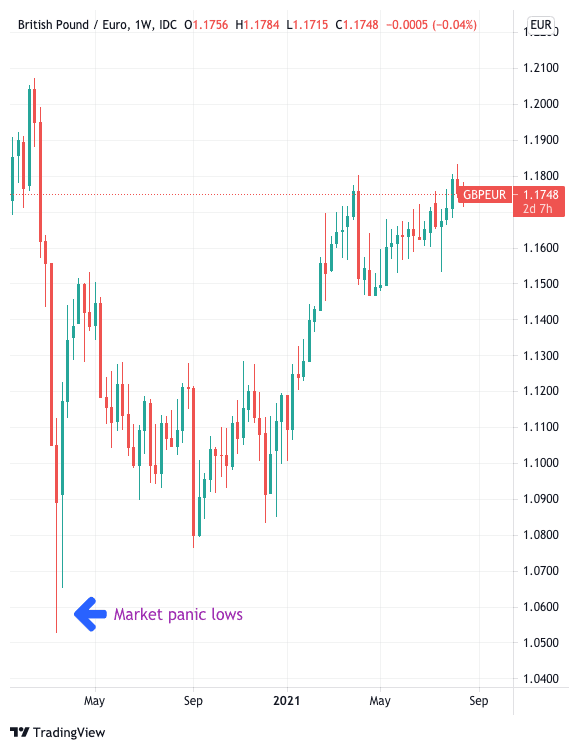 Above: The GBP/EUR uptrend really gathered momentum in 2021 as Brexit uncertainty was finally set aside.

The other major trend driver is the persistent divergence in policy at the ECB and Bank of England as both central banks react to differing rates of economic growth, employment levels and inflation.

"Data surprises have largely come out positive since the UK’s 19 July ‘Freedom Day’. If data momentum were to continue, we could see further outturns supporting GBP, especially against G10 funders such as the EUR and CHF," adds Raczko.

An expectation for higher central bank interest rates in the UK relative those in EU - the ECB is only expected to raise rates in 2024 - means the yield paid on bonds in the two regions is diverging.

This is particularly true of yields paid on shorter-term bonds, most notably those with a duration of two and five years.

"EUR/GBP tested the range lows this week. The currency has been tracking 5y rate spreads. We expect this to continue," says Paul Robson, Head of G10 FX Strategy at NatWest Markets. 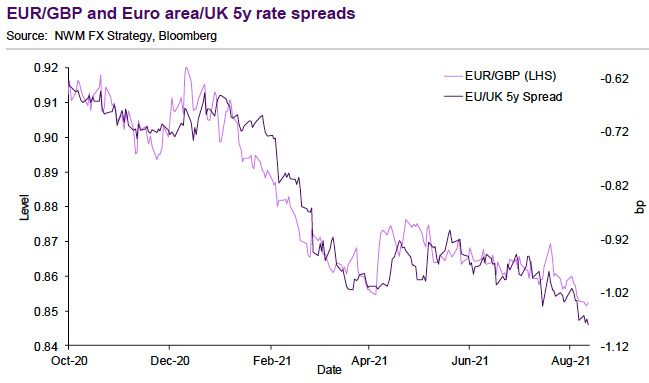 Other foreign exchange strategists are placing an emphasis on the importance of rate spreads regarding the Pound-Euro exchange rate's outlook.

"The pound continues to benefit from its persistent rate advantage across the board," says Valentin Marinov,
Head of G10 FX Strategy at Crédit Agricole.

In particular, Crédit Agricole observe the EUR/GBP 2-year rate spread has recently hit its lowest level since late 2017, a similar dynamic to that observed by NatWest in the slightly longer duration 5-year spread.

Underpinning the Pound's supportive dynamics are expectations for an ongoing UK economic recovery that has seen unemployment steadily fall and wage pressures grow, with ONS figures out this week revealing a record 8.8% year-on-year increase.

Data out midweek revealed UK headline CPI inflation had fallen back to 2.0% - the Bank of England's target - but economists say other inflation prints point to the potential for a surge in inflation over coming months.

The result is a heightened a risk that inflation could still be lodged well above the Bank of England's target by the middle of 2022, an outcome the market and economists expects to result in an interest rate rise.

"The UK is pushing ahead with the economy’s full opening, which remains positive for Sterling through both higher rates and portfolio inflows," says Robson.

UK economic growth data for the second quarter came in stronger than analysts had expected, rising 1.0% in June against the 0.8% the market was expecting.

"The reopening of the domestic economy has provided a bigger (if perhaps slightly delayed) boost than the market expected," says Robson.

Risks to the outlook comes most obviously in the form of reimposed restrictions at some point in the future.

Covid cases in the UK have been steadily rising over recent weeks and with schools due to reopen in September there are fears of another spike in cases heading into the autumn months.

But, on this count NatWest are of the view the UK government will resist imposing lockdowns.

"Having not taken the opportunity to delay the country's reopening despite ample cover provided by surging cases, it's clear the hurdle for renewed restrictions in the UK is extremely high," says Robson.

NatWest Market strategists have been buyers of the Pound against the Euro in 2021 saying the removal of Brexit related political risks and a strong post-Covid rebound would set Sterling up for gains.