HSBC researchers find that flow dynamics point to the Euro now evolving to become a "less cyclical currency than in the past", saying the single-currency could therefore be in the process of "changing its spots".

A significant development might be underway in global currency markets: a steady shift in what drives the Euro.

According to researchers at HSBC, the Euro is increasingly becoming a 'risk off' currency and less 'pro cyclical' in nature.

This has important implications for the outlook of Euro exchange rates; if HSBC are correct in their assessment a continuation of the global recovery trade would likely mean lower Euro purchasing power against the likes of the Pound.

But, firstly, what does a 'risk off' currency do?

This is a currency that gains when stock markets are declining as investors take 'risk' off the table, i.e. when they sell assets these currencies tend to appreciate in value.

This is typically because investments are funded in these currencies - think of the Yen and Franc - as they tend to come with a low cost of borrowing attached, courtesy of the ultra-low rates at their respective central banks.

This is now almost certainly true of the European Central Bank (ECB) and the Euro, particularly given money market pricing suggests no rate rise is likely at the ECB until at least 2024.

Secondly, what does a 'cyclical' currency do?

Think of the Australian Dollar: this is an example of a currency that tends to rise when the global economy is expanding as global growth benefits Australia's substantial raw materials export industry.

The Pound is another example of a pro cyclical currency as it tends to appreciate against the likes of the Dollar, Yen and Franc when global markets are expanding. It is telling that the Pound's all time low against the Euro came not in the wake of Brexit but in the wake of the 2008 market crash that saw massive selling of stocks and the UK currency.

The next near-all time low came in 2020 at the height of the global Covid-19 market panic: 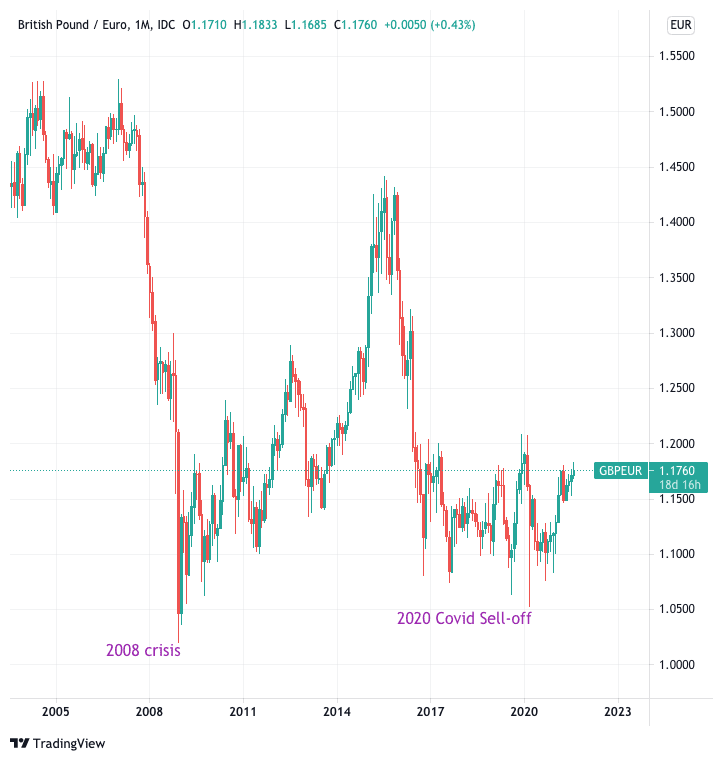 Above: The all-time lows in GBP/EUR were at times of heightened global market fear.

HSBC researchers find that flow dynamics point to the Euro now evolving to become a "less cyclical currency than in the past", saying the single-currency could therefore be in the process of "changing its spots".

In essence, if correct then the Euro is unlikely to benefit against the likes of the Pound and other 'pro cyclical' currencies in times of global economic expansion.

It also means that the Euro would benefit were global markets to undergo a fresh panic, for whatever reason.

HSBC say the Eurozone's May Balance of Payment data shines a light on just how difficult it has been for the Eurozone to attract capital inflows in recent years.

"In our view, a lot of this comes down to the low growth, low rates environment that has become seemingly endemic in the region," says Paul Mackel, Global Head of FX Research at HSBC. 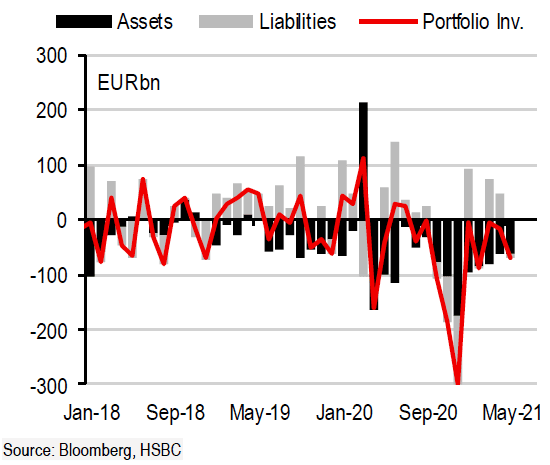 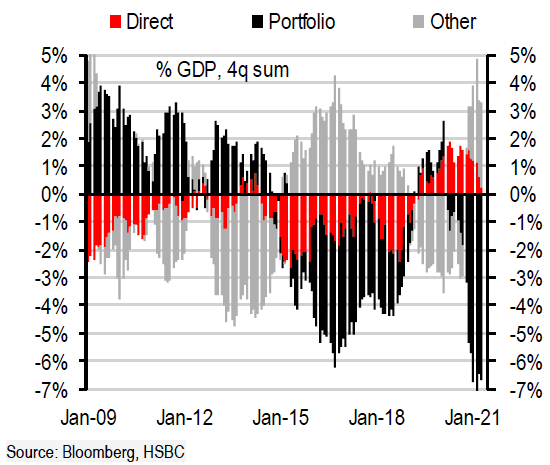 According to HSBC there has been a clear trend since 2015, especially in terms of domestic capital exiting the region in search of higher yields, and is a consequence of the ECB’s quantitative easing programme and shift to negative rates.

"Signs that rates may be lower for even longer could encourage these outflows to continue, or even exacerbate them," says Mackel.

This is found to be particularly relevant now that the ECB has announced a new strategy that will allow it to tolerate inflation above 2.0% for a period of time.

HSBC finds that cumulative flows since 2008 show a bigger build-up of foreign assets than incurrence of liabilities.

"This is the same pattern seen in some of the safe haven currencies such as the JPY and CHF," says Mackel.

"The EUR has traditionally been seen as a pro-cyclical currency, but these longer-term underlying shifts may suggest the EUR is starting to change its spots and may be in the process of moving from cyclical to risk off," he adds.

Looking ahead, HSBC say unless there is a clear shift towards a stronger economic outlook, which drives a reassessment of higher Eurozone rates or asset returns, "it is hard to argue that portfolio flows will come flooding back into the single currency".

A persistent financial account deficit – driven by portfolio outflows – leads HSBC to question whether the Euro's status could be in the process of evolving.

"For many years, the EUR was seen as a cyclical play, which benefited from strong global growth. However, the last decade or so has seen overseas asset accumulation outstrip inflows from foreign investors. This could start to change the way in which the EUR behaves. One rationale for the safe haven behaviour of the likes of the CHF and JPY is that they have sizeable foreign assets that can be repatriated during times of crisis," says Mackel.

Evidence of a 'safe haven' Euro was observed during the sharp but brief correction in the S&P 500 in mid-July where the Euro was the fourth best G10 FX performer, only slightly behind the Yen, the U.S. Dollar and the Swiss Franc. 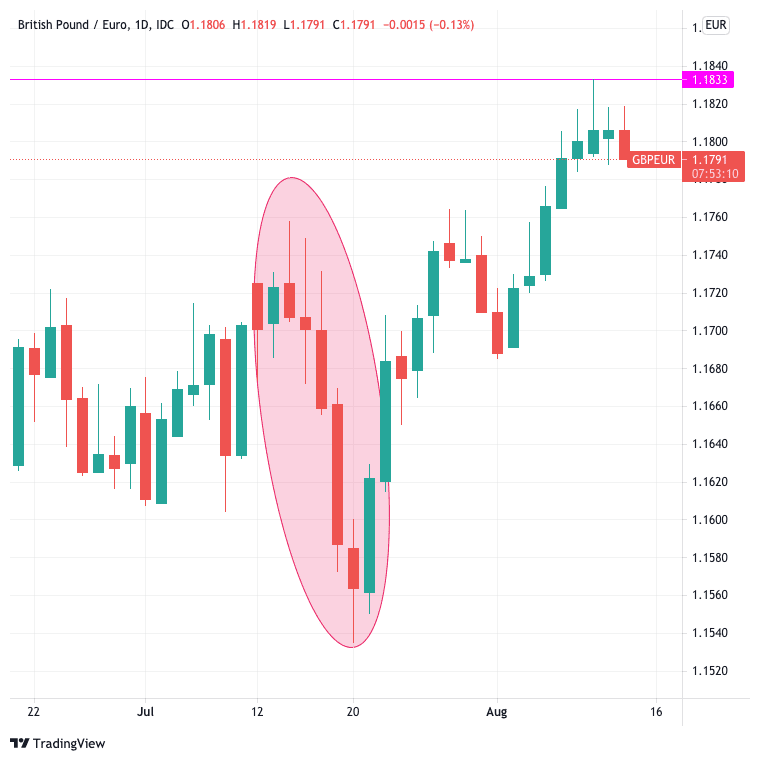 For those watching the performance of the Pound-to-Euro exchange rate, the highlight area in the above corresponds with that 'risk off' episode of mid-July.

Therefore, looking ahead, further outperformance in the Pound-Euro will be reliant on an ongoing appreciation in global markets.

Risks to global growth and markets could therefore benefit the Euro: watch out for a significant deterioration in the Covid picture, which would likely involve the emergence of a new Covid strain that is more transmutable than existing variants and shows a resistance to vaccines.

Other risks include a policy mistake at the Federal Reserve, maybe where Fed moves too fast and aggressively on withdrawing financial support.