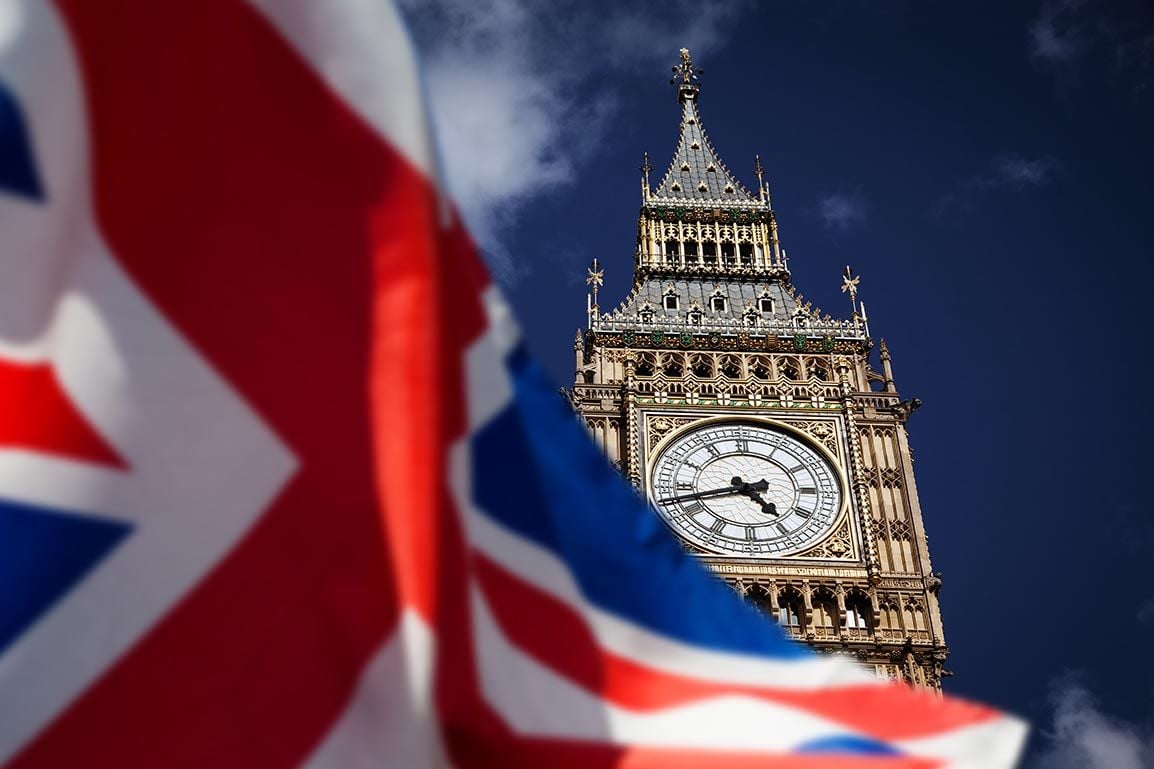 Pound Sterling slumped late last week after Thursday’s monetary policy decision from the Bank of England (BoE) provided no new catalyst for further excitement, while losses deepened on Friday in price action that may have had to do with election results out on Saturday.

Monday’s price action will be revealing of the extent to which investors and traders were deterred away from the Pound by political risks which failed to materialise over the weekend, although it’s the BoE’s latest outlook that matters most to Pound Sterling’s prospects beyond this week.

“The Bank will end its asset purchases before the Fed and the ECB. Meanwhile, its new economic forecasts imply that conditions for tighter monetary policy may be in place in late 2022,” says Ruth Gregory at Capital Economics.

Sweeping upgrades to forecasts for GDP, inflation and a range of other metrics had already been anticipated by the market and were followed last Thursday by a swift and almost ominous observation from Governor Andrew Bailey that risks to all are now on the downside. 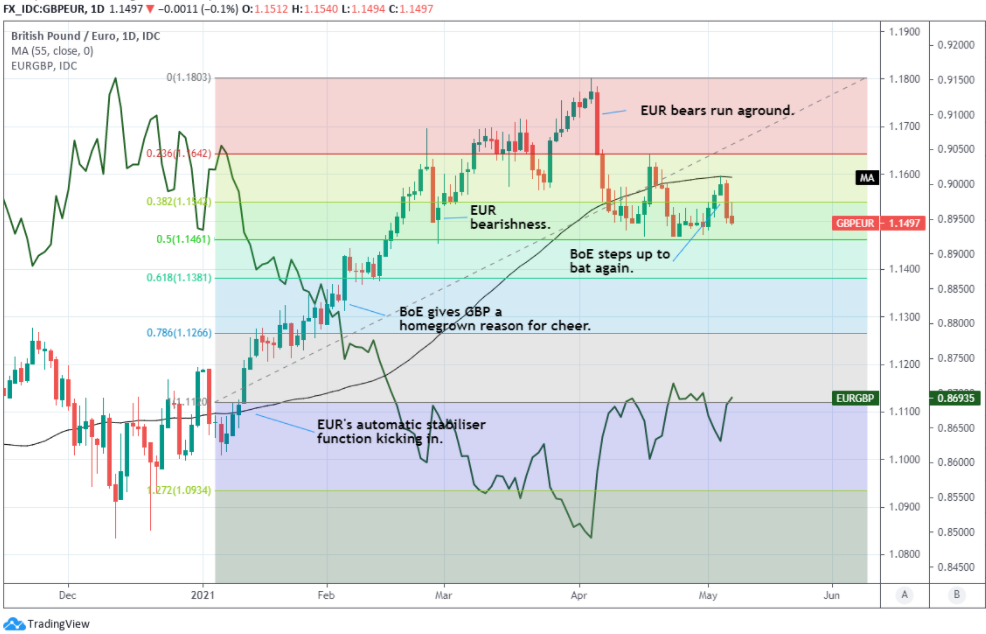 Above: GBP/EUR at daily intervals with 55-day average, Fibonacci retracements and EUR/GBP.

“Despite yesterday’s rally EURGBP still remains capped by the .8722/32 tough resistance (highs from March). It is currently holding over the 55-day ma,” says Karen Jones, head of technical analysis for currencies, commodities and bonds at Commerzbank, who’s targeting a GBP/EUR move to 1.1719 in the coming weeks.

Governor Bailey’s remarks suggest the market has already seen and heard all of the optimism it is likely to get from the BoE without progress in realising the bank’s bullish forecasts, which elevates the importance of this Wednesday’s first quarter GDP data.

Office for National Statistics data will reveal on Wednesday whether the BoE is still too downbeat in spite of the huge upgrades to its GDP forecasts, with the bank anticipating a -1.5% quarterly contraction under a third ‘lockdown’ for last quarter, while consensus and the market envisage a -1.6% decline.

“This should show a solid 1.5% YoY, which is considerably ‘less bad’ than feared given the Brexit disruption and the strict lockdown as March activity was strong due to the combination of schools returning and a healthy month for retail. This should further underscore the prospects for a very strong economic recovery in 2Q and be supportive of the pound,” says Petr Krpata, chief EMEA strategist for interest rates and FX at ING.

An upside GDP surprise could enable Sterling to rise in its own right as well as benefit from further declines by the U.S. Dollar over the coming days, although it’ll be June and July before the market and BoE policymakers have a clearer idea of whether the pending UK rebound is really going to be as strong as what is now widely assumed.

The latter could mean the Pound-to-Euro exchange rate is slow to get meaningfully above 1.16, around which it’s recently struggled, given this particular pair accounts for around half of the trade-weighted Sterling exchange rate and has risen faster this year than the Pound-Dollar rate.

U.S. currency strength as well as some first-quarter weakness in the Euro have seen GBP/EUR rising faster than GBP/USD so far in 2021 although this dynamic has recently gone into reverse and could do even more so over the coming weeks after Friday’s non-farm payrolls surprised sharply on the downside of market expectations.

“It is now harder to see taper tantrum risks returning in the near-term. While US rates consolidate, it creates a more favourable environment for higher yielding and commodity related currencies to outperform,” says Derek Halpenny, head of research, global markets EMEA and international securities at MUFG. 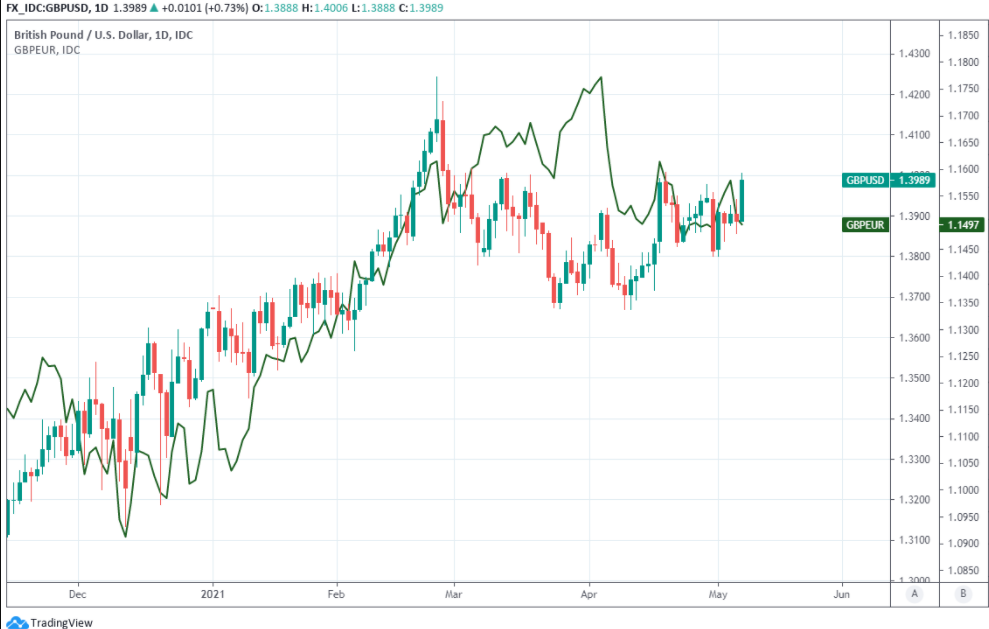 Above: GBP/USD at daily intervals with GBP/EUR.

The U.S. still created a strong 266k jobs last month, although economists had been looking for an even larger and almost unheard of 966k new jobs to have been recovered by a U.S. economy that was reopened in most parts and which is still being pumped by trillions in fiscal stimulus.

However, the market was evidently disappointed by the outcome and not least because the prior month’s number was revised down at the same time from +916k to +770k.

The payrolls data vindicated the Federal Reserve (Fed) for its own recent policy stance, which had the bank insisting in April that it could be quite some time before U.S. job and inflation data have reached the milestones necessary for the Fed to even begin thinking about a mere discussion of changes to its monetary policy programmes.

Payrolls already appeared over Thursday and Friday to have persuaded investors that buying and holding the U.S. Dollar might not be the best way to spend time and opportunity, as the greenback fell sharply against just about all major developed and emerging market currencies ahead of the weekend.

Meanwhile and elsewhere in the world, outlooks for economies are improving and in some parts the economic data is already beginning to surprise in the upside; especially in Central and Eastern Europe as well as parts of Asia where currencies underperformed during the early stages of this year.

Included among those earlier underperformers are the Korean Won, Malaysian Ringgit, Singapore Dollar, Russian Rouble, Polish Zloty, Romanian Liev and Czech Koruna, which the author suspects will be among the FX market’s outperformers this quarter, a period in which the likes of Sterling and the Euro are also likely to continue rising.

“USD weakness looks set to continue in the week ahead,” MUFG’s Halpenny says. “We are recommending a new short USD/RUB trade idea on top of our existing short USD trade ideas against the AUD and CZK.” 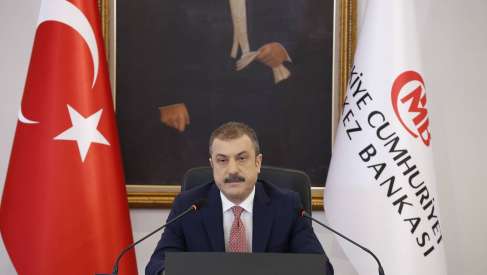