The U.S. Dollar went from boom-to-bust in spectactular fashion late Wednesday after the Federal Reserve (Fed) caught a falling bond market in its arms and in the process burned the fingers of investors whose 'hawkish,' if-not tin-eared wagers had effectively thrown down a gauntlet for American policymakers.

U.S. exchange rates were left sinking deep underwater after an eagerly-awaited monetary policy decision from the Fed sent Dollar 'bulls' and bond market 'bears' fleeing for the hills while arresting a surge in borrowing costs driven by investors' wagers that it would lift interest rates as soon as next year.

It left the Fed Funds rate range unchanged at 0%-to-0.25%, in line with expectations, and made no changes to a $120bn per month quantitative easing programme that continues "until substantial further progress has been made toward the Committee’s maximum employment and price stability goals."

"The ongoing public health crisis continues to weigh on economic activity, employment, and inflation, and poses considerable risks," the Fed said. "The Committee decided to keep the target range for the federal funds rate at 0 to 1/4 percent and expects it will be appropriate to maintain this target range until labor market conditions have reached levels consistent with the Committee’s assessments of maximum employment and inflation has risen to 2 percent and is on track to moderately exceed 2 percent for some time."

Chairman Jerome Powell later said in his press conference that "some of the worst outcomes" have been avoided thus far in economic crisis that has played out alongside the health catastrophe that is the coronavirus, but he also warned of risks to the recovery outlook and argued against complacency by the market.

Powell betrayed bemusement at expectations for rates to rise as soon as next year when noting "we have layed out clear guidance on lift-off."

"This was a tricky and critical meeting as they had to communicate a balance between a Covid-scarred economy and a booming outlook. It was a fine line to walk and, clearly, they don’t want to hamper a recovery that’s just getting going," says Nigel Green, CEO at deVere Group. "We can expect some price growth as economies re-open, but this is likely to be short-term. I think, as it stands now, longer-term inflation fears, due to pent-up demand are being overplayed." 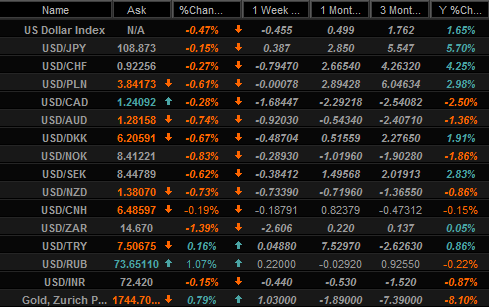 The Fed's message was almost the polar opposite of what bears in the bond market and Dollar-bulls in foreign exchange evidently hoped to hear.

'Hawkish' punters had wagered that a quickening vaccine rollout, trillions of Dollars of aid for Americans and a strong growth recovery would lead to a sustained surge in inflation that later forces the Fed to abandon its new policy strategy in favour of somewhat panicky rate rises. This saw investors dumping bonds with fervour, nearly doubling the 10-year yield during 2021 in the process while forcing others to book profits on bets against the Dollar.

The reality that matters most is that offical measures of inflation have "averaged slightly below 2 percent for over a quarter-century," reflecting undershoots of the Fed's 2% target, while the bank is evidently unwilling -  for the time being at least - to allow itself to be bounced into lifting rates on investors' timelines.

"The Fed is telling us that the outlook is better, but don’t worry your little heads too much about rate hikes," says Avery Shenfeld, chief economist at CIBC Capital Markets. "The Fed had to acknowledge that large scale fiscal stimulus will raise the growth profile, with its call for year on year growth by Q4 raised to 6.5%, a touch above our forecast, but sees growth slowing next year to 3.3% and 2.2% in 2023, despite stimulus from near zero rates over that whole period." 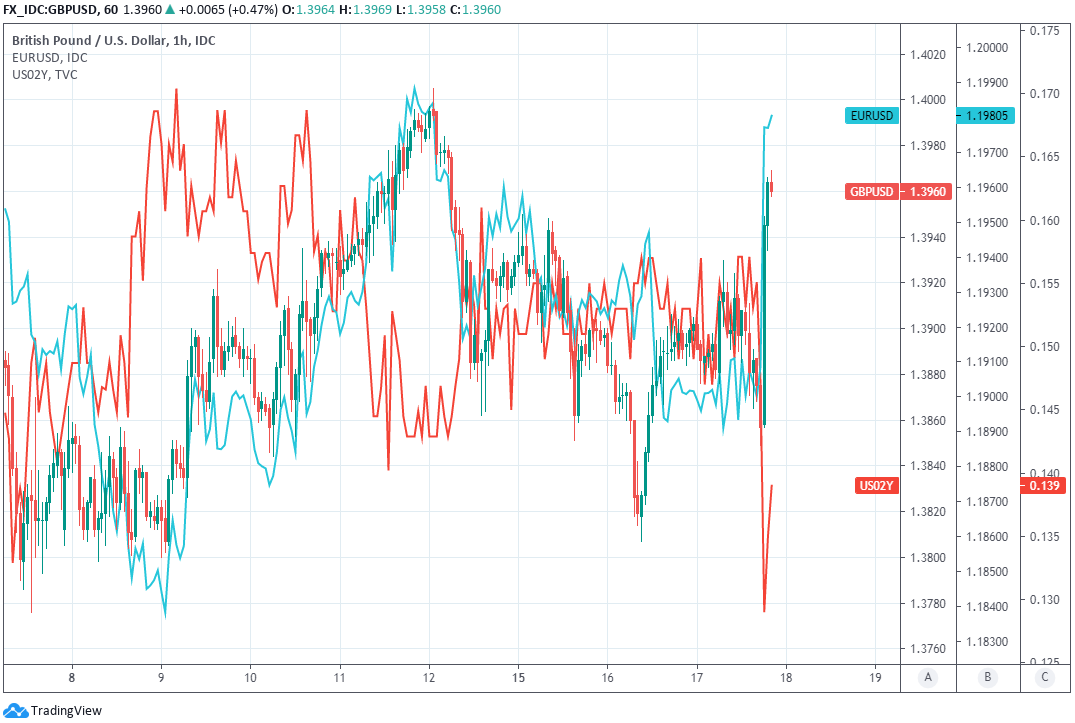 Dollar exchange rates went from near-universally higher to decisively lower across the board after market pricing for as many as three rate rises before the end of 2023 was not vindicated at all by either the statement or the March set of Federal Open Market Committee member projections.

Profit-taking had otherwise been lifting Dollar exchange rates periodically throughout 2021, including on Wednesday before the Fed's decision, as well as prompting forecasters to lessen expectations for depreciation this year.

"The Fed sounded more upbeat on economic projections but also kept referring to the fact that they want to see actual progress and not forecasted progress before changing anything," says Andreas Steno Larsen, chief FX strategist at Nordea Markets. "They still want to send a signal that inflation will be allowed to overshoot target without an immediate tightening response. They expect core PCE prices at 2.2% for this year and 2.1% in the endpoint in 2023."

Bond market bears had hoped to be vindicated by a 'dot-plot' that showed increasing numbers of FOMC members indicating a rate rise is likely in 2023 rather than 2024, but not enough FOMC members moved their dots from where they were to alter the average projection and Chairman Powell later stressed that the associated summary of economic projections "is not a forecast."

Powell said it's far too early to even begin entertaining the tapering of the Fed's $120bn per month quantitative easing programme.

"I would have expected more policymakers to move their dots in a bit, but the median plot did not move into 2023. Doves rule - there is not enough of majority yet seeing any need to act to raise rates," says Neil Wilson, chief market analyst at Markets.com. "The Dollar dropped sharply and has held the losses." 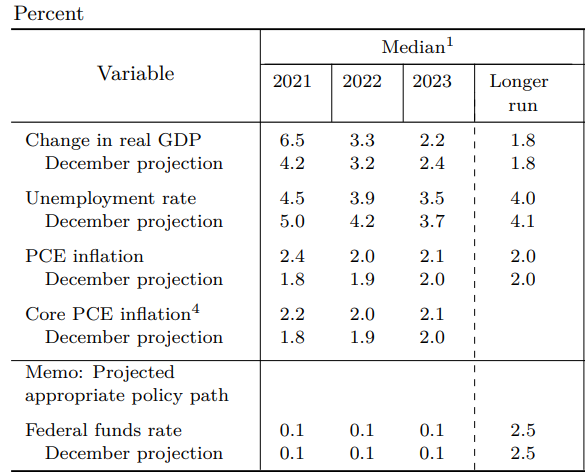 In some ways Dollar losses reflect disappointment of expectations that were not only premature but also a bit tin-eared in light of the emphasis that Powell and colleagues have placed on the need to see above-target inflation realised under its new strategy, rather than simply forecast or aniticpated.

"The tone taken by Powell suggests the Federal Reserve will happily sit behind the curve as inflation overshoots in the coming years, helping to further push back rate expectations," says Simon Harvey, a senior analyst at Monex Europe.

The Fed's new preference for average-inflation-targeting means it now interprets a statutory mandate and self-imposed 2% target symmetrically. That means it's got to generate more inflation than was the case previously or is the case elsewhere in the G10 world, which necessitates a lower-for-longer rate stance.

Underlying the strategy - which was announced by Powelll at the Jackson Hole Symposium in 2020 - is the idea that there should be an offsetting period in which inflation is able to rise above the target without eliciting rate rises, in order to compensate for past periods where inflation has wallowed below the target. Typically, undershoots haven't always deterred the Fed from lifting rates and although this changed at Jackson Hole, financial markets have so-far struggled to fully internalise the message and its implications. 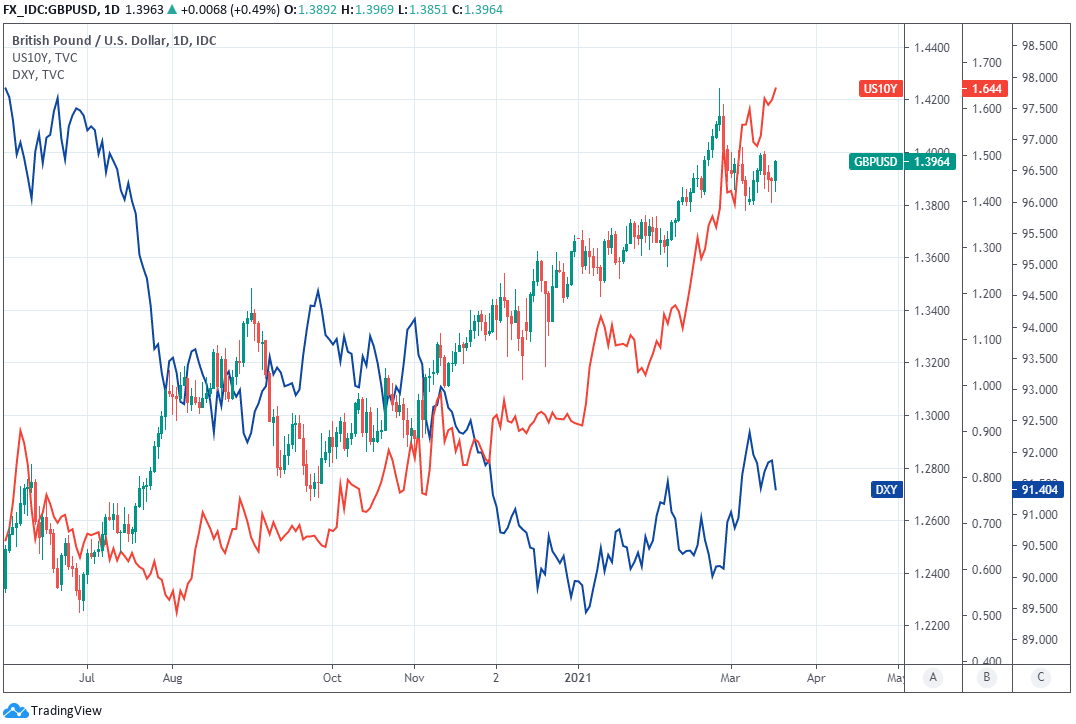