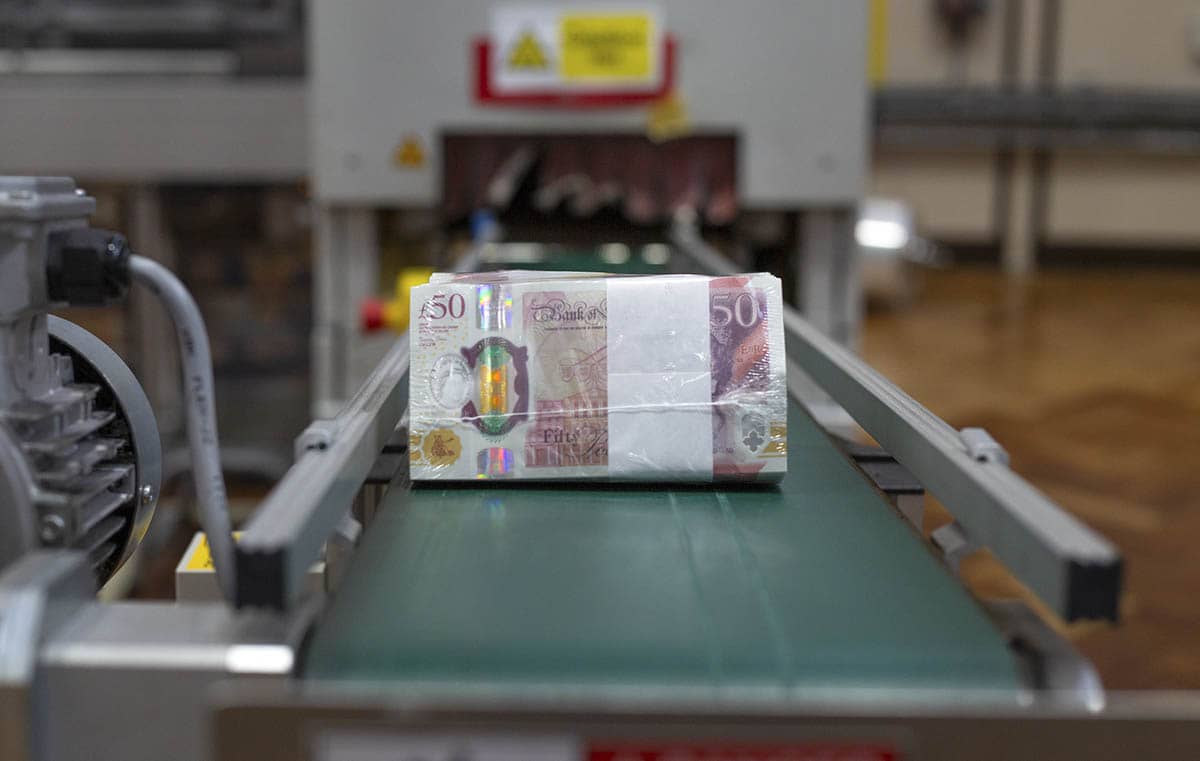 The Bank of England has reduced the scale of its quantitative easing programme while issuing a sizeable upgrade to their 2021 economic growth forecasts, but the overall signal from the Bank has triggered a sell-off in the British Pound.

The Bank of England (BoE) wants to stretch its existing £150BN purchase programme until the end of 2021 and therefore reduced its weekly assets to £3.4BN from the £4.44BN seen over recent weeks in order to do so.

The BoE said in a statement the decision to reduce weekly purchases should "not be interpreted as a change in the stance of monetary policy."

This is a message designed to ensure markets keep their expectations for tighter monetary conditions in the future contained; what policy makers do not want is for markets to interpret the decision as a signal that interest rate rises are coming sooner than later.

In addition, the BoE was able to push back expectations on a future interest rate rise by sounding a sanguine tone on inflation.

"Inflation is projected to rise to close to the target in the near term as some of those effects fade. In the central projection, CPI inflation rises temporarily above the 2% target towards the end of 2021, owing mainly to developments in energy prices. These transitory developments should have few direct implications for inflation over the medium term, however. In the central projection, conditioned on the market path for interest rates, inflation returns to around 2% in the medium term."

It is this pushing back on expectations for an interest rate rise before 2023 that appears to have opened the door to Sterling weakness.

John Hardy, Head of FX Strategy at Saxo Bank says this echoes the Federal Reserve's strong push back against such expectations.

But he adds the market's knee-jerk decision to sell the Pound was "a bit unfair".

"The market was pricing a fairly hawkish Bank of England meeting today and largely got what it expected, although the knee-jerk selling of sterling in the wake of the BoE statement suggests that more was needed to justify the recent build-up of more hawkish expectations around the meeting," says Hardy.

The Pound-to-Euro exchange rate (GBP/EUR) dipped to 1.1495 at one stage in the London afternoon / New York morning session. 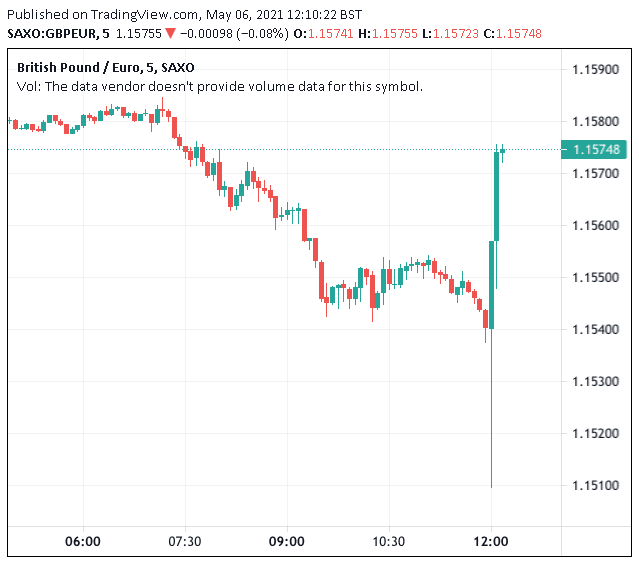 Above: Volatile price action in GBP/EUR in the wake of the BoE decision.

Thu Lan Nguyen, FX and EM Analyst at Commerzbank says the decision by the BoE to reduce the speed of the asset purchases means it is now able to extend the overall purchases over a longer period.

"That in itself is not really a positive signal for Sterling. After all it is clear that interest rates will only begin to be normalised once the QE programme has come to an end. The longer the programme continues for, the later interest rates are likely to be hiked," says Nguyen.

The BoE's economic forecasts show the UK economy will now recover to pre-Covid levels in 2021, having undergone the sharpest increase in annual growth since 1947, a sharp improvement on previous expectations.

The BoE projects GDP growth in 2021 will be 7.25%, which is a material increase on the 5.0% projected in February, with economists at the Bank saying the improvement is down to progress on vaccinations and Government fiscal support.

The MPC now thinks the unemployment rate will peak at 5.4% in the third quarter of 2021, rather than the 7.8% forecast previously.

Economists raised the inflation forecast for the near-term, but lowered it further out.

This means the BoE will effectively fulfil its mandate of targeting inflation at 2.0%.

Despite the 'hawkish' inflation projections, the BoE's own projections show the Bank Rate will likely only rise in the second quarter of 2023.

"At face value... the conditions for tighter policy may be in place in late 2022, much as the markets currently expect," says Thomas Pugh, UK Economist at Capital Economics, "our inflation forecasts suggest that inflation won’t stick around 2.0% until late 2023 so we still think that policy won’t be tightened until well after 2022". 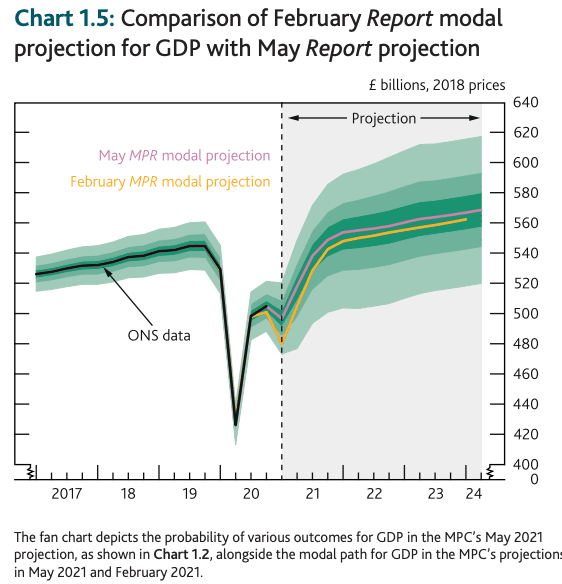 Should the market bring forward their own expectations for the rate rise from here then the Pound would likely rise further, particularly relative to those currencies where rates are seen as unchanged in a similar time horizon.

A more 'hawkish' slant to the outlook for UK interest rates, and by extension the Pound, comes courtesy of the BoE's improved assumptions on the UK economic outlook.

Not only is the 2021 forecast upgraded, but UK GDP is expected to have fallen by around 1.50% in the first quarter of 2021, which less than was assumed in the February Report

A bullish stance on the outlook is said to rest on the observation new Covid cases in the United Kingdom have continued to fall, the vaccination programme is proceeding apace, and restrictions on economic activity are easing. 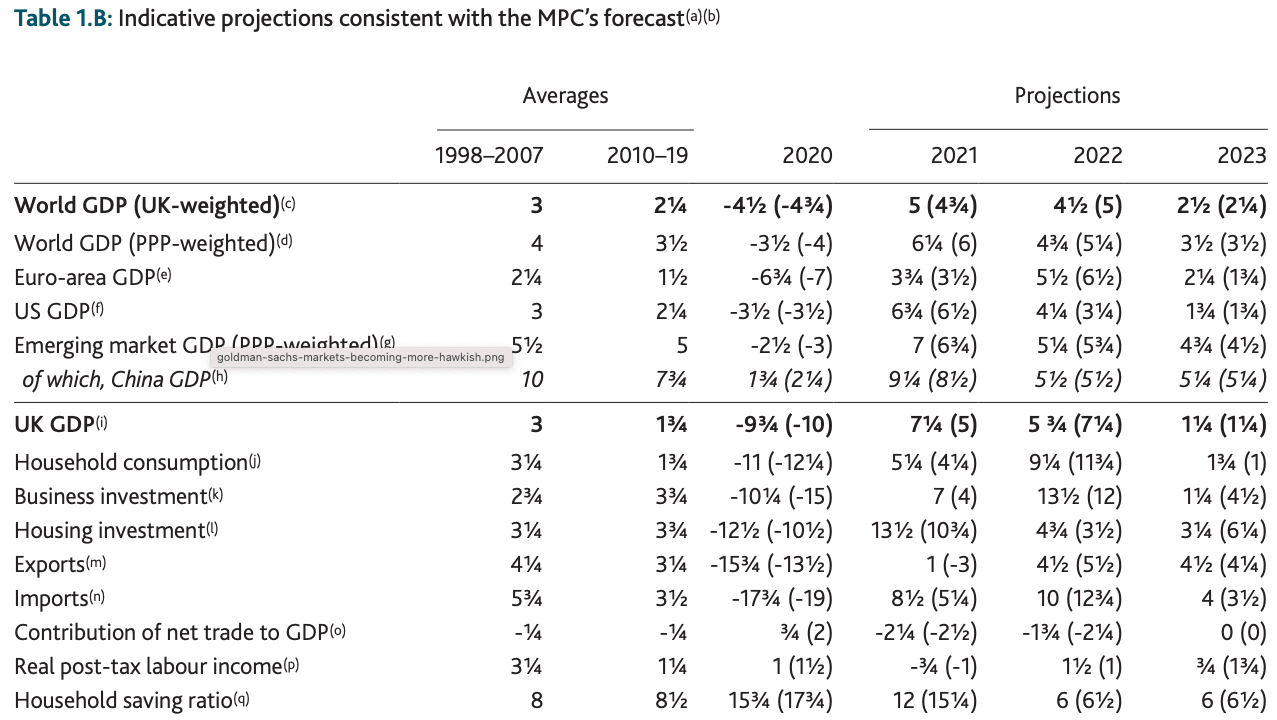 The BoE says GDP is expected to recover strongly to pre‑Covid levels over the remainder of this year in the absence of most restrictions on domestic economic activity.

Consumer spending is expected to remain robust as households run down over the next three years around 10% of their additional accumulated savings.

Despite Sterling's relatively lacklustre response, analysts at Wells Fargo say they view today's announcement as a modest upside to their outlook for the British Pound.

"At the same time, we also view the announcement as broadly consistent with our medium-term profile which already anticipates modest gains in the pound versus the U.S. dollar over time, and a stronger pound versus the euro," says Nick Bennenbroek, International Economist at Wells Fargo