- GBP/EUR rallies to new 12 week high
- ECB to push back against Euro strength says HSBC
- EUR/USD at 1.20 looks to be a line in the sand for ECB

HSBC have said the European Central Bank (ECB) will become increasingly uncomfortable with the Euro's strength and could seek to curtail it in the future, creating the conditions for the Pound to hold its recent gains and the U.S. Dollar to make a comeback from its recent multi-year weakness against the single currency.

In a note to clients, Dominic Bunning, Senior FX Strategist at HSBC in London says the Euro's recent rise against the Dollar, Pound and a host of other currencies has left the trade-weighted measure of the Euro's value at its strongest since August 2014. 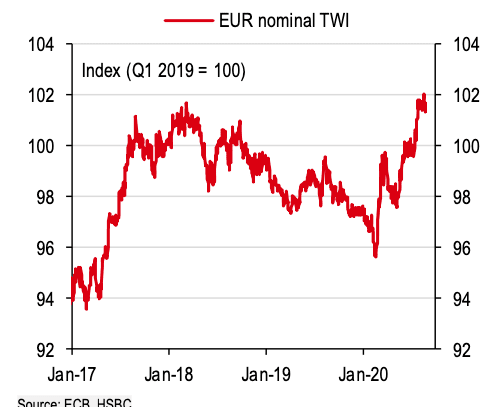 The call from HSBC comes following a setback for the Euro on global foreign exchange markets, with the currency being rejected at a key technical level against the U.S. Dollar and trading near 12 week lows against Sterling as news emerged the ECB was becoming increasingly uncomfortable with the currency's value.

"The euro extended declines ahead of next week’s ECB policy meeting, weighed by reports that policymakers are worried about the currency’s recent rise," says Hann-Ju Ho, Economist at Lloyds Bank.

Despite the recent setback for the currency, it will need to fall significantly further if it is to support the Eurozone recovery.

The value of the Euro matters as economists say the stronger currency acts as a headwind for the economy, cutting into exporter's margins and making Eurozone goods and services more expensive on the international market. It also has the impact of lowering the cost of some imported good, thereby contributing to weaker inflation and making it more difficult for the ECB to target their desired level of 2.0% inflation.

"In an economy deep in recession and facing deflationary pressures, the EUR’s strength is creating much tighter financial conditions than would otherwise be in place. The market may not care about this disconnect for now, but it creates a big headache for the ECB," says Bunning.

The Euro-to-Dollar exchange rate has rallied by around 7% since its February lows, taking the pair to a new multi-month high at 1.20 on Tuesday September 01.

The Euro's rally was noted by the ECB whose Chief Economist Philip Lane was quick to sound a warning, saying the "the euro-dollar rate does matter".

The comments sparked a reversal of some of the Euro's recent strength, ensuring the Euro-Dollar fell back to 1.18.

Chief Economist Lane has put markets on notice that rising EUR/$ (white) is an issue for the ECB, a good "defensive" play. But trade-weighted Euro (orange) is very elevated, so the ECB needs to play "offense." That starts with being very clear on deflation risk in the Euro zone. pic.twitter.com/am14siqNAP

The Euro has however recently ceded some ground to the British Pound which has been a relative outperformer in the summer period, with the Pound-to-Euro exchange rate rising to a 12 week high at 1.1284 on September 01 (EUR/GBP hit a low at 0.8862).

Whether or not the Pound is able to hold these gains could well depend on what happens to the Euro-Dollar exchange rate, with the rule of thumb being that a falling EUR/USD tends to drag down EUR/GBP. (If you would like to lock in current exchange rates for use at a future date, in order to protect your international payments budget, please learn more here).

Lane's comments on the exchange rate appear to draw a line in the and for EUR/USD at around 1.20, indeed the ECB has a history of making noise when the Euro approached this key level in the recent past.

The ECB has set a precedent on the matter previously after it managed to temporarily temper the EUR/USD momentum in August and September 2017 when sources allegedly leakder stories to Reuters and Bloomberg every time 1.20 was breached, according to Andreas Steno Larsen, chief FX strategist at Nordea Markets.

"We are on alert of a similar rhetorical intervention from Frankfurt should the EUR/USD gain too fast again," says Larsen.

"The ECB’s references to the exchange rate increased significantly after the last round of notable EUR strength in 2017. By early 2018, the ECB was placing much more importance on the exchange rate," says Bunning. "This coincided with a reversal in growth dynamics, growing expectations for further ECB easing and a fall in the EUR."

The HSBC analyst says the Euro's 2020 strength is much less justified by the economic backdrop than it was in 2017-18, "we believe the ECB’s rhetoric on FX is likely to ramp up and further easing is likely. Such a shift by the central bank should curtail further strength in the EUR, in our view".

"The ECB is already paying close attention to tightening financial conditions, which are being exacerbated by a strong EUR at a time when a weaker currency is justified. We would not be surprised to see the ECB put more emphasis on the currency given its lack of firepower to loosen financial conditions through other channels. As and when this happens it is likely to be a catalyst for a weaker EUR," says Bunning.