The Pound-to-Euro exchange rate reached a new 12 month high over the course of the past 24 hours and studies of the market setup suggests further follow through could be possible in the near-term.

The exchange rate reached a high of 1.1250 on Tuesday and is quoted at 1.1241 at the time of writing, with gains being propelled by a combination of positive technical flows, UK economic outperformance relative to the Eurozone and the market's apparent willingness to look through the current sombre mood music concerning Brexit trade negotiations.

"Sterling continues to outperform the euro and is at its best level since early June against the single currency," says Marc Chandler at Bannockburn Global Forex.

Long-term studies suggest the Pound remains towards the bottom end of its range against the Euro, however recent weeks have seen some increase in value and David Sneddon, a technical analyst at Credit Suisse, says the exchange rate could be set for a more "meaningful turn."

Sneddon says the GBP/EUR is making a "concerted challenge" on key price resistance from the July high at ~1.1190. With the market above its 13- and 55-day averages the Credit Suisse analyst continues to look for a clear and sustained removal of the high to see a bottom established "to warn of a more meaningful turn" higher.

The GBP/EUR exchange rate reached a multi-year low of 1.0528 in March at the height of the covid-inspired market meltdown, before recovering back to the 1.10 region. Since May the pair has occupied a band located between 1.09 and 1.12, frustrating those looking for better levels from which to purchase Euros. 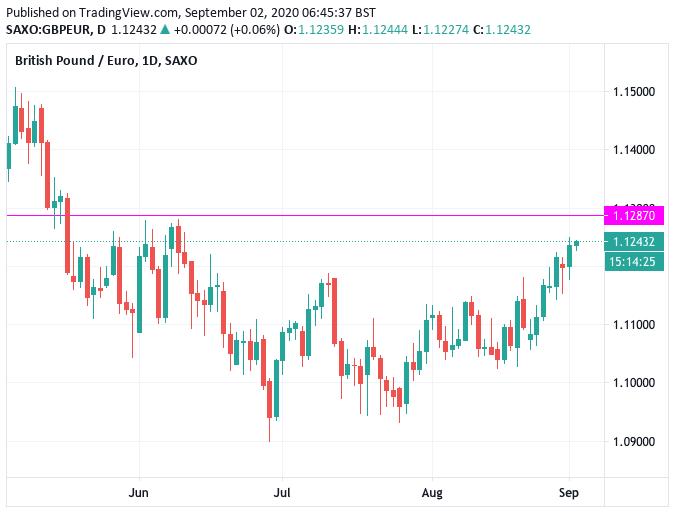 Robin Wilkin, a Cross Asset Strategist at Lloyds Bank says the exchange rate is trying to break upwards through the 1.1186/1.12 recent range highs.

Wilkin says "at the moment we remain wary that the nature" of the rise from 1.09 and the 1.1030 higher low "remains quite corrective in nature, suggesting there is still the risk of an eventual move back towards" 1.0752 before a bottom is truly formed.

"However, we have to respect the break of the range," says Wilkin, eyeing the break through the range highs "and the trending nature of the move so far".

If you would like to protect your current payments budget by locking in current levels, or would look to automatically book a better rate when it hits, please learn more here.

Pound Sterling advanced against the majority of its peers over the course of the past 24 hours after Bank of England data showed a strong recovery in consumer demand for credit and suggested a 'mini boom' in housing was underway.

The data confirms the UK's economic recovery remains intact and robust, and importantly, more healthy than some other regions.

The UK's robust data releases of recent weeks has surprised the foreign exchange market to an extent that it is helping support Sterling and appears to be distracting the market from the pressing question of whether or not the UK and EU will reach a post-Brexit trade deal by year-end.

"GBP has performed well in the last few weeks, supported in part by stronger than expected data," says Lloyds' Wilkin.

Can the trend continue? Much will of course depend on how trade talks commence and whether the economic rejuvenation can continue, something numerous economists are sceptical of noting the ending of government economic support schemes.

"Overall, these figures support other evidence that the economy continued to recover in July. But we still think that the realisation of more job losses after the furlough scheme started to be wound up in August will cause the recovery to slow," says Andrew Wishart, UK Economist at Capital Economics.

When it comes to exchange rates, relative outperformance matters, and for the Pound-Euro exchange rate the UK's apparent economic outperformance of the Eurozone is helpful. Indeed, confidence in the Euro was shaken on Tuesday by data that showed the region had slipped into deflation in August.

"The ongoing resurgence of COVID-19 cases in Europe poses a meaningful risk to consumer demand recovery in the near term which may put additional downward pressure on EA inflation," says Iaroslav Shelepko at Barclays. 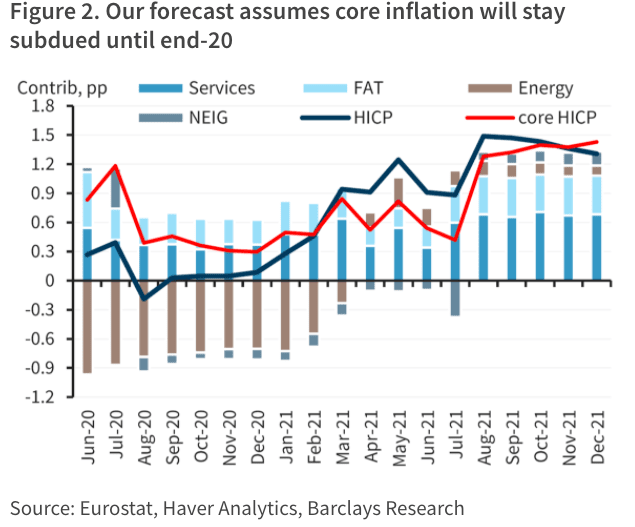 The Eurozone Consumer Price Index went below zero for the first time since May 2016 after falling from 0.4% in July to -0.2% in August, according to the flash release from Eurostat, when consensus was for a decline to only 0.2%.

With the Eurozone slipping into deflationary territory expectations are once again rising that the European Central Bank (ECB) might have to step in an offer further assistance to the economy. When expectations for further ECB assistance - or monetary easing - rises, the general rule of thumb is that the Euro falls.

“The European Central Bank now has another potentially existential threat to tackle when its Governing Council meets next week to set its monetary policy," says Karim Yousfi, Chief Global Strategist at Audacity Capital. “It has already gone ‘all in’ to prop up the Eurozone – slashing interest rates deep into negative territory and pumping colossal sums into the economy – leaving it precious few cards still to play."

Christopher Dembik, Head of Macro Analysis at Saxo Bank says, "following these disappointing figures, pressure will likely mount for the ECB to increase its PEPP envelope by year-end in order to address investors' concerns about low inflation.

PEPP is the ECB's response to the covid-19 pandemic, which will see the bank inject a further €750BN into the Eurozone economy and financial system, by expanding this envelope - or increasing the amount - the ECB would be increasing the size of its balance sheet which would typically be expected to weigh on Eurozone bond yields as well as the Euro.

However, Florian Hense, an Economist at Berenberg, says expectations for such imminent action at the ECB might be premature.

"Given the recent volatility in the data, the ECB may choose to look through the considerable short-term variations. The ECB can also stress that it has already delivered an unprecedented stimulus amid the Covid-19 pandemic and that part of its policies work with a lag," says Berenberg.