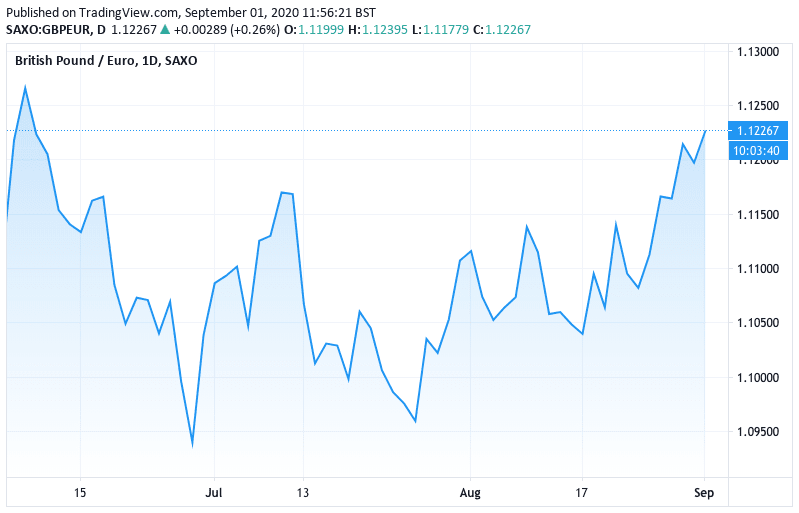 Pound Sterling advanced against the Euro and other peers after Bank of England data showed a strong recovery in consumer demand for credit and suggested a 'mini boom' in housing was underway.

Confidence in the Euro was meanwhile shaken by data that showed the region had slipped into deflation in August.

Growth in UK household spending and a recovery in the housing market have underpinned the UK's economic recovery from the covid-19 lockdown, according to new data from the Bank of England released at the start of September.

The Bank of England's latest credit statistics showed a surge in consumer credit made available by UK lenders to the tune of £1.200BN in July, which is a strong recovery on the contraction of -£0.382B reported in June, and doubles the £0.678N figure the markets were expecting.

Wishart says the mortgage data "provided the first hard evidence of the mini-boom in the housing market evident in the survey data thanks to pent-up demand and the stamp duty holiday."

"Unsecured consumer borrowing also returned to normal in an encouraging sign that fear of the virus has not prevented a return of big ticket purchases. Following four months in which consumers paid back unsecured loans, consumer credit rose by £1.2bn in July, similar to the pre-virus norm," says Wishart. "Overall, these figures support other evidence that the economy continued to recover in July. But we still think that the realisation of more job losses after the furlough scheme started to be wound up in August will cause the recovery to slow".

The robust UK data coincides with an uptick in the value of Pound Sterling, which has rallied to its highest level against the U.S. Dollar since December as the Pound-to-Dollar exchange rate reached 1.3465. The move is however not simply a function of Dollar weakness as the Pound-to-Euro exchange rate has rallied 0.40% to reach 1.1234, the pair's highest levels since June 10.

"GBP has performed well in the last few weeks, supported in part by stronger than expected data," says Robin Wilkin, Cross Asset Strategist at Lloyds Bank. (If you would like to lock in current exchange rates for future use, or automatically book better rates when achieved, please learn more here).

For Sterling, this data out of the UK paints a supportive contrast to that out of the Eurozone, where data out Tuesday surprised by showing the bloc had slipped into deflation.

According to Eurostat, CPI inflation for August read at -0.2% year-on-year, which is substantially below the 0.2% expected by markets. It suggests the European Central Bank has much work to do if it is to get prices back towards its 2.0% target. Expectations for further quantitative easing measures at the ECB will likely grow as a result, which could suck some of the positive impetus out of the Euro going forward.

"For the European Central Bank, which meets later in the month, these numbers are more a confirmation of what they already know: this crisis is deflationary despite some of the novel elements to it," says Bert Colijn, Senior Economist, Eurozone, at ING Bank N.V.