- 'No deal' risk, U.S.-China tensions and economic data in focus this week.

The Pound-to-Euro rate closed its worst week since the height of panic over the coronavirus on Friday but could attempt to stabilise in the coming days as it nears support on the charts, although analyst commentary suggests this will only be a short-lived period respite ahead another big leg lower.

Sterling fell more than two percent against the Euro to 1.1182 last week and suffered heavy losses against most other major currencies as investor risk appetite wained and Brexit negotiators sounded the alarm again on a lack of progress in trade talks between the UK and EU ahead of an important deadline. This came as relations between the U.S.-China deteriorated, with the two sides exchanging harsh words and trade threats late last week, potentially undermining the prospects of a global economic recovery.

Friday's losses mean Sterling did not benefit from the typical bout of profit-taking that might otherwise have ensued ahead of the weekend, despite slipping steadily through the week, and with the exchange rate now near the 38.2% Fibonacci support level at 1.1148 it might attempt to stabilise early in the new week. However, last week's price action took the Pound-to-Euro rate over the edge of a technical precipice around 1.1295 in time for Friday's close, which sets Sterling up for further declines up ahead.

"EUR/GBP has eroded the .8864/65 resistance. A close above here is needed to confirm a short term base targeting .9060 This potential base will remain valid while the market continues to trade above the April low," says Karen Jones, head of technical analysis for currencies, commodities and bonds at Commerzbank. "Near term support lies at .8700. Above resistance at .8864/65 sits the March 20 low at .8994." 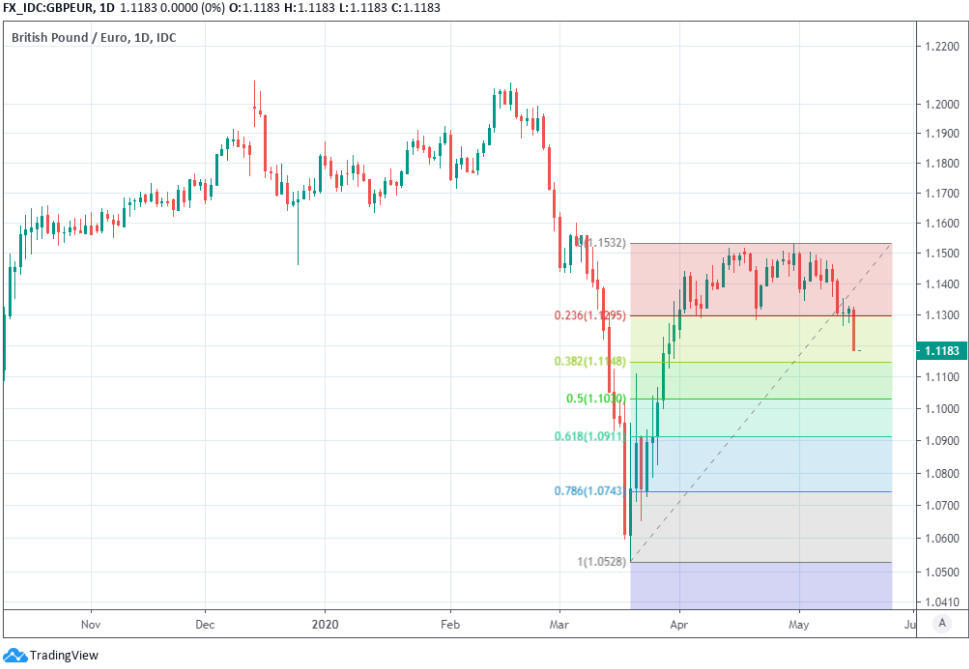 Above: Pound-to-Euro rate closes below 23.6% Fibonacci retracement of March-April rebound ahead of further losses.

The price action envisaged by Jones would be playing out as the end-June European Council deadline for organising an extension of the Brexit transition period draws closer, bringing another cliff edge into view.

"We expect pressure to gradually build on sterling. Little progress has been made in the UK-EU trade negotiations so far, with both sides reported as being far apart on the conditions of a possible trade deal while the UK continues refusing the extension of the transition period. We view the GBP market as complacent to such a risk," says Francesco Pesole, a strategist at ING. " Non-extension would likely bring GBP/USD to 1.19 and below by end-June (and EUR/GBP above 0.90)."

The official deadline for agreeing future preferential trade relations or defaulting to a relationship governed by World Trade Organization terms is December 31, although arguably the real one is currently June 30 because Prime Minister Boris Johnson has previously said "the Government will need to decide whether the UK’s attention should move away from negotiations and focus solely on continuing domestic preparations to exit the transition period in an orderly fashion," should the substantial body of a deal not be in shape before then. David Frost said Friday; "We very much need a change in EU approach for the next Round beginning on 1 June. In order to facilitate those discussions, we intend to make public all the UK draft legal texts during next week so that the EU's member states and interested observers can see our approach in detail."

June is also the deadline for extending the transition. Absent a request for an extension, which the government says it won't make, the market could begin to fret about something like a 'no deal' Brexit again and the last time it did that the Pound-to-Dollar rate fell below 1.20. This level has already been broken once and if it gives out again while the Euro-to-Dollar rate remains around 1.08, it would be enough to put the Pound-to-Euro rate down at 1.1111, which would lift EUR/GBP to the 0.90 envisaged by ING.

"The GBP has been undermined in part by more challenging conditions for risk assets over the past week, but weakness this month appears to be driven by GBP specific negative factors as well. It is notable that other high beta G10 currencies such as the AUD have still performed well this month," says Lee Hardman, a currency analyst at MUFG. "The best outcome for the GBP is of course an extension but that looks less likely and as each day passes, we expect the markets to focus on this risk more. In these circumstances, we expect the GBP to continue to underperform in the nearterm." 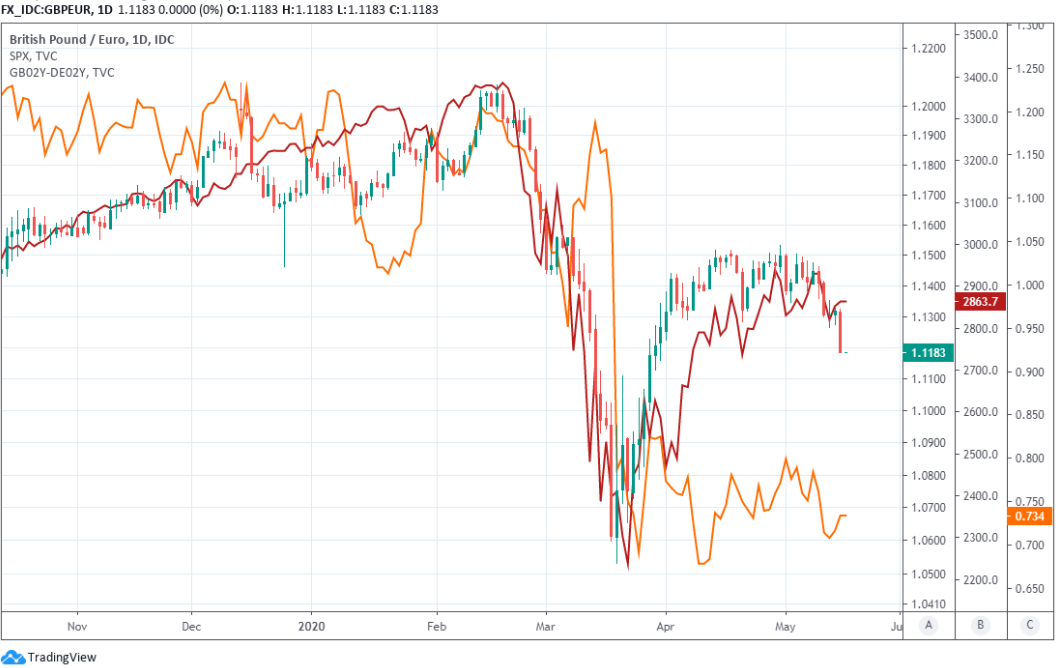 There are no further Brexit talks until June 01, which might leave Sterling to be driven by the ebb and flow of investor risk appetite as well as the implications of key economic data due out on Thursday and Friday. March jobs data is due out on Tuesday ahead of IHS Markit PMI figures for May on Thursday and retail sales figures for April on Friday.

Consensus is looking for the unemployment rate to remain at 4.4% for March, but disclosures from the Department for Work and Pensions suggest the unemployment rate was tracking 6.6% at the end of March, following one week of 'lockdown'. It's thought to have risen even further since, likely into the double-digits in April, and there's reason to think it could go on rising for some time and potentially even after the coronavirus has been contained.

Markets will look on Thursday to see if the April lows observed in IHS Markit PMI surveys of the services, manufacturing and constructions sectors remains intact. Meanwhile, Friday's fall in retail sales figures for the month of April will provide investors with more insight on the likely scale of damage done to the economy by the coronavirus and the 'lockdown' used to contain it. However, the general mood among investors might be a more important influence on a Pound-to-Euro rate that has a strong positive correlation with the S&P 500 stock index that many analysts and investors say has rebounded too far, too fast.

"Tensions between the US and China are flaring up again, with President Trump threatening to ‘cut off the whole relationship’. Brexit negations are struggling, to say the least, and the German court ruling on the ECB’s quantitative easing program reveals how political pressures are building in other areas, as well. This comes at a time when equity markets seem to be consolidating in the wake of a massive stimulus-driven rally," says Jeroen Blokland, a portfolio manager at Robeco, a buy-side fund house with €171bn (£151bn) under management in 2019. "With the global economy still struggling to recover and forward earnings looking lofty, this increases the risk of a renewed downturn in equities – something I believe should be taken into account for multi-asset portfolio." 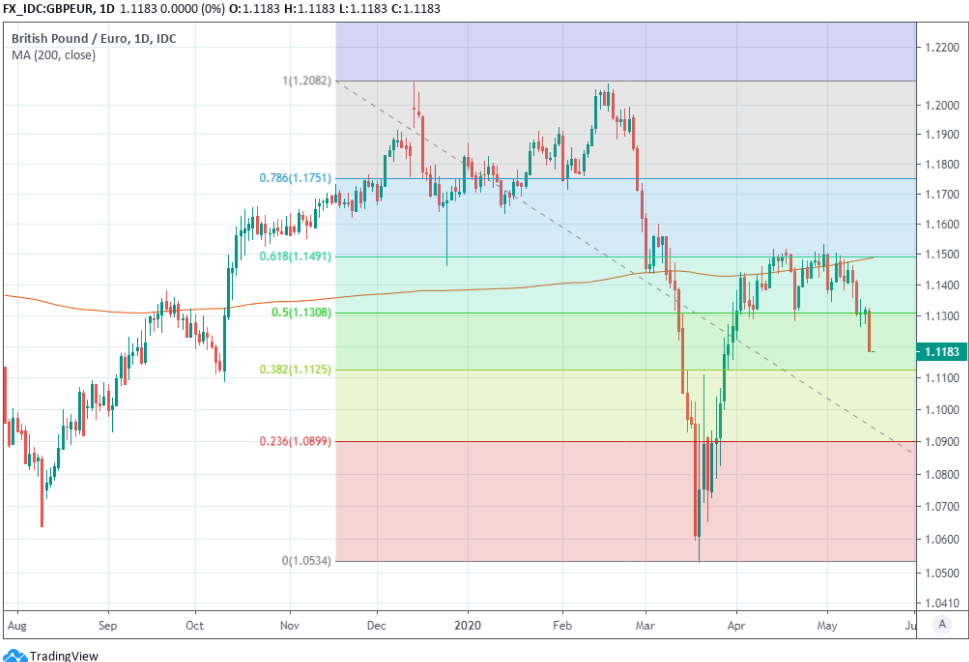 Above: Pound-to-Euro rate closes below 23.6% Fibonacci retracement of March-April rebound ahead of further losses.