The Pound staged a 0.50% recovery against the Euro on Tuesday, March 24 amidst a broad improvement in investor sentiment, linked to signs the China was exiting its strict quarantine aimed at thwarting the spread of the coronavirus.

Swings in investor sentiment has an impact in the flows of international capital into, and out of, the UK since global stock markets began to plunge in late February amidst investor panic over the rapidly spreading coronavirus. The swings in sentiment in turn impact the valuation of Sterling.

News that China will lift travel bans in Hubei province from Wednesday serves as a rare pice of good news for markets and prompted investors to buy discounted stocks and other 'risk-on' assets.

China was first to shut down owing to the spread of the virus and now appears to be the first country emerging out of the crisis.

This is a constructive development for those currencies that are most exposed to the performance of the Chinese economy, particularly the Australia Dollar and New Zealand Dollar while it also aids a recovery in overall investor sentiment generally.

However, the British Pound also sits on this spectrum, falling when stock markets are in decline and rising when they are moving higher as the UK currency is particularly prone to shifts in the inflows and outflows from the UK of investor capitall.

Stock markets rallied on the news that the easing of restrictions by Chinese authorities comes after Hubei province reported new infections dropped to zero on March 19, suggesting the spread of the disease had all but been contained.

While there are some cases of new infections, it is believed these are in citizens returning to China from other parts of the world where they would have been exposed to the virus.

Authorities have added they will lift restrictions on citizens in the town of Wuhan - the epicentre of the global virus pandemic - from April 8.

China initiated a strict lockdown in Wuhan and Hubei province on January 23, thereby restricting the movements of 60 million people and setting the Chinese economy on the path to a sharp economic slowdown that translated into significant falls for 'risk-on' currencies such as Sterling.

The FTSE 100 is trading 4.5% higher at the time of writing, the German DAX is up 6.6% and France's CAC is up 5.8%. The strong recovery in Asia and Europe looks set to feed into the U.S. session where futures for the Dow and S&P 500 are aimed higher.

Pound Sterling has responded to the developments by going higher: the Pound-to-Euro exchange rate is trading 0.70% higher at 1.0843, a sharp reversal of the poor performance seen at the start of the week. 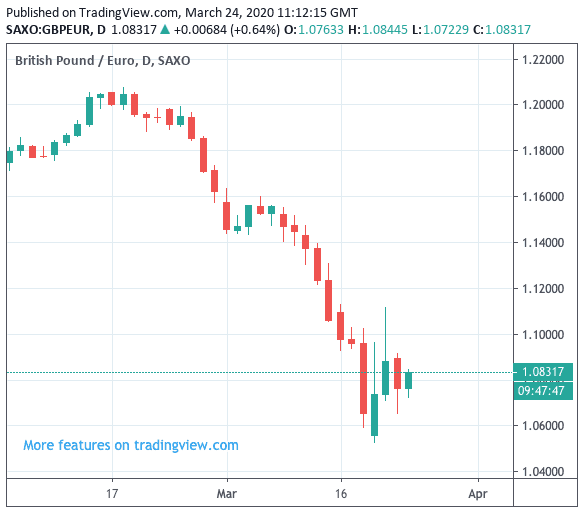 Above: Sterling-Euro's daily chart puts the scale of the recent declines into perspective when compared to today's bounce.

A surge in demand for Euros and the market's lingering distaste for Sterling has seen the Pound-to-Euro exchange rate endure another +1.0% decline on Monday that prompted the pair to once again fallen below 1.08, a move that suggests the strength in Sterling we saw in the second half of last week was potentially a 'dead cat' bounce and the market is therefore still biased to weakness.

The Pound has lost 7.82% of value against the Euro in March alone, and while the pair has recovered some lost ground over recent days this remains an exchange rate that looks heavy and prone to further declines.

It appears traders are happy to sell into any strength in Sterling, confirmation of this bias was confirmed over the course of the past two trading sessions when the GBP/EUR exchange rate shot through 1.10 on Friday to only be met by heavy selling interest and fall below the 1.08 level and reach a daily low of 1.0727.

The Euro has meanwhile outperformed the majority of its peers on global FX markets, recording gains in excess of 1.0% against the Canadian Dollar, Yen, Pound and crucially, the Dollar at the start of the new week.

A 1.0% advance in the Euro-Dollar exchange rate to 1.0794 will have provided some upside impetus for the Euro to appreciate in purchasing power against the Pound.

Despite Euro strength, the sell-off in the Pound has ultimately been broad-based and is therefore suggestive of underlying weakness in the currency. 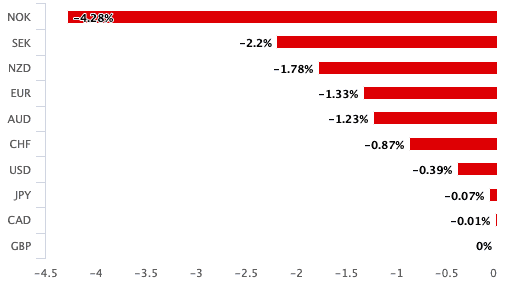 Above: Sterling suffered losses against all the major currencies at the start of the week

A surge in demand for UK government bonds could be a key catalyst behind the latest declines as the value of UK gilts has risen sharply in the wake of the Bank of England's announcement last week that it would be significantly expanding its quantitative easing programme.

This involves the buying of government bonds (gilts) in the secondary market by the Bank of England: as the Bank's actions increase demand the amount the government has to pay bond holders declines, therefore the Bank is able to keep the cost of borrowing lower than normally would be the case.

The intervention by the Bank of England comes at an opportune time for a Government that is going to have to significantly expand its spending levels in order to fight the coronavirus-inspired economic slump. This spending will ultimately be financed by borrowing and if it were not for the Bank of England stepping in to snap up Government bonds with freshly-printed money the market could start asking questions as to the ability of the UK to finance its fiscal support package.

Last week saw the Bank of England cut interest rates to 0.1% and increased its government and corporate bond holdings by £200BN in an unanimous decision in a bid to stave off the negative effects of the coronavirus pandemic.

As bonds falls in value they ultimately become less attractive to international investors who might in the past have sought them out as an investment asset. Without the demand for UK assets by foreign investors Sterling is left exposed to declines.

Market data shows the yield paid on UK ten year bonds has fallen some 30 basis points over the past three days, courtesy of the Bank of England's actions.

"The BoE asset purchases are a game-changer for GBP rates while an increasing number of risks could take EUR/GBP to parity," says Morten Lund, US & UK analyst at Nordea Markets.

The latest bout of selling pressures could therefore be related to the Bank of England's quantitative easing programme in the debt markets.

The coronavirus outbreak has meanwhile kicked another leg of support from underneath Sterling, as global investors sell UK assets in favour of holding onto cash, a series of events that leaves the currency potentially more exposed than many of its peers.

Because the UK runs a current account deficit - largely courtesy of the country's tendency to import more than it exports - the Pound is left exposed to global investor sentiment.

A current deficit can persist if a country's currency is propped up by inflows of investor capital, but when that capital dries up the currency will in theory fall until a new equilibrium is established between imports and exports.

"The UK has a twin deficit with the biggest current account deficit (as % of GDP) in G10. A constant capital inflow is therefore needed to underpin the GBP which is challenging in the present 'dash for cash situation',” says Lund.

With international investors running scared the positive flows of capital into the UK appears to be fading to the extent that a major move lower in the currency has been initiated, therefore the longer the current crisis in confidence persists owing to the coronavirus, the further the Pound could fall.

But there are other reasons why Lund believes Sterling has lost ground.

One reason being the UK has a large and systemic important banking sector which Lund says is particular exposed in times of credit crunches and disturbances in the global funding system. 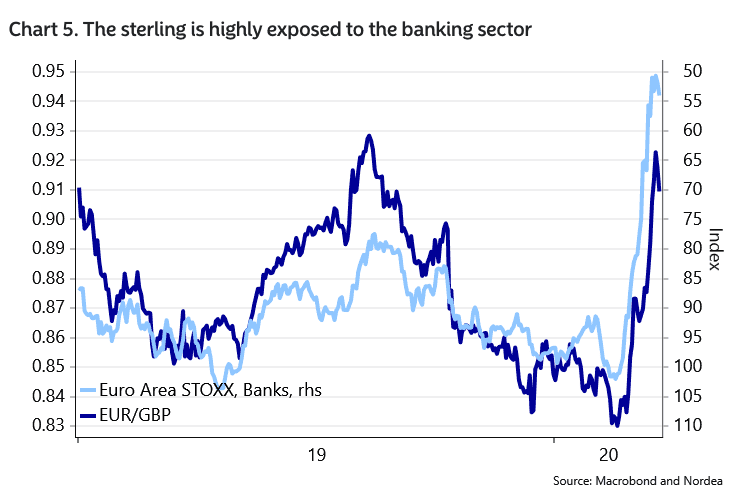 Another reason for Sterling's vulnerability in times of market turbulence is the impact of Brexit on how the international investor community perceives the UK.

"After years of Brexit uncertainty and low returns, the sterling has lost some of its appeal as a major reserve currency," says Lund.