The British Pound went higher against the Euro, Dollar and other major currencies on Thursday afternoon following a surprise decision by the Bank of England to cut interest rates and boost its quantitative easing programme.

The Bank of England cut interest rates to 0.1% and increased its government and corporate bond holdings by £200BN in an unanimous decision in a bid to stave off the negative effects of the coronavirus pandemic.

"In light of actions to tackle the spread of the virus, and evidence relating to the global and domestic economy and financial markets, the Monetary Policy Committee (MPC) held an additional special meeting on 19 March. Over recent days, and in common with a number of other advanced economy bond markets, conditions in the UK gilt market have deteriorated as investors have sought shorter-dated instruments that are closer substitutes for highly liquid central bank reserves. As a consequence, UK and global financial conditions have tightened," said the Bank in a statement detailing the decision.

The initial move by foreign exchange markets was to bid the value of Pound Sterling: the Pound-to-Dollar exchange rate is at 1.1660 which is 0.60% higher than where it opened the day.

The Pound-to-Euro exchange rate is meanwhile at 1.0803, a sizeable 1.86% higher than where it started the day.

The textbook states that when a central bank cuts interest rates and engages in quantitative easing the currency it issues should fall. However, markets saw this rate cut and quantitative easing announcement coming from a mile away, and we are most likely witnessing a 'buy the rumour, sell the fact' action. Or to be more accurate, 'sell the rumour, buy the fact' in this instance.

Viraj Patel, FX and Macro Strategist at Arkera says the move by Threadneedle Street is "arguably GBP negative given a very large increase in the BoE's balance sheet", but he notes that the moves are ultimately neutral in view of the fact that they are ultimately in line with recent Federal Reserve and European Central Bank measures.

"Aggressive front-loaded monetary & fiscal easing from the UK should pay dividends in future. But we're still in the eye of the COVID-19 liquidation storm," says Patel.

“The Pound hardly reacted to the news. A small victory for a currency that has spent the past week crumbling at every opportunity. As the moment, the UK is using a blend of fiscal stimulus and monetary easing to bolster the economy, but as rates move closer to 0.0, further cuts will become a much less attractive prospect. The challenge officials now face is to eradicate the spread of coronavirus whilst maintaining something of a sustainable economic outlook moving forward, all with increasingly limited policy options,” says Sebastien Clements, currency analyst at OFX.

'Dash for Cash' to Keep Sterling Under Pressure

While the Pound is moving higher following the BoE's decision, we will need more positive price action to convince us that a fundamental shift is underway and that a bottom has been formed.

The global stock market sell-off appears to be ongoing, with major markets falling once more. Meanwhile, the stock market selloff has been met by an associated slump in bond prices and commodity prices such as oil. This has created a significant demand for cash.

With the global financial system primarily priced in dollars, it is little wonder the Greenback is in such demand. What we are witnessing a global dash for cash and the Dollar is the undoubted beneficiary while currencies such as the Pound tend to lose ground.

"Those focussed on GBP are looking for idiosyncratic reasons. Well at the moment there are none. GBP like all currencies are bowing to the King - the Dollar," says David Bloom, Head of Global FX Research at HSBC.

The Pound-to-Dollar exchange rate fell 4.0% on Wednesday to hit a new 35 year low when it reached 1.1452, and while it has recovered some lost ground Sterling continues to look heavy. 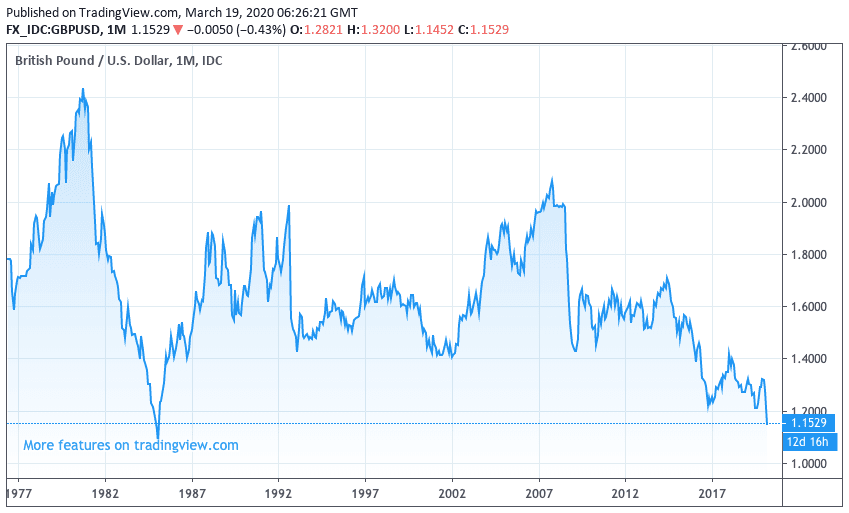 But it is not just against the Dollar that Sterling has suffered declines, the Euro has been making rapid advances too. 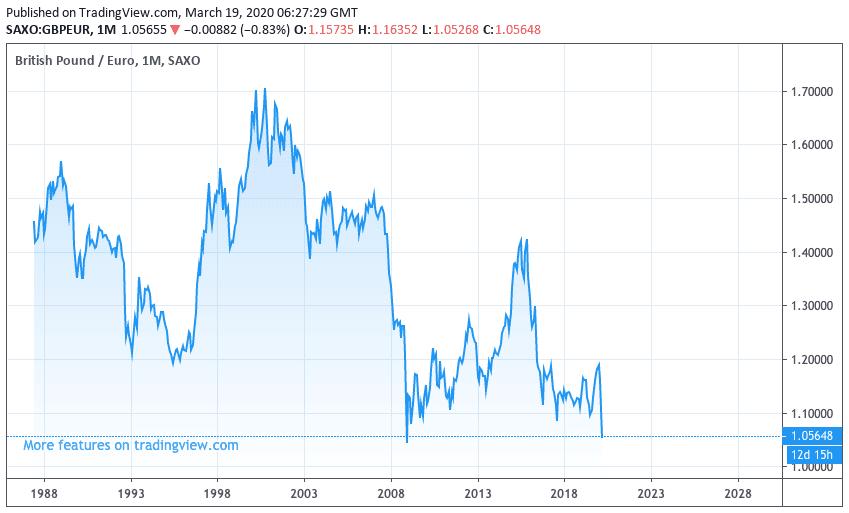 The Pound-to-Euro exchange rate had been as low 1.0519 ahead of the Bank of England decision which is the lowest level for the pair since early 2009. (If you are buying Sterling, these are the best rates in years. Speak to a dealer about how to be able to lock-in these record rates for the future via a forward contract.)

Indeed, we wrote yesterday that the lows we are witnessing in Sterling stemming from the coronavirus crisis will be deeper than the lows that were forecast by foreign exchange analysts in the event of a 'no deal' Brexit scenario.

Regarding the issue of the current account deficit - as mentioned by Foley in the above comment - the UK runs a current account deficit, which means it imports more than it exports, which basically means we pay out more to the rest of the world than we take in. This is obviously not sustainable and typically the Pound would be expected to fall as a result allowing the current account to reach an equilibrium. This would occur as a softer Pound means the cost of imports become more expensive while the cost of our exports to international buyers becomes cheaper.

The current account deficit is usually masked by a steady flow of investor capital that is attracted to the UK, which in turn keeps the value of Sterling elevated above where it would be if it simply reflected imports/exports.

When global investor confidence evaporates - as is the case with the coronavirus - that supportive inflow of investor capital can disappear and we instead see outflows as investors seek cash. In short, Sterling is particularly sensitive to global investor meltdowns.

Indeed, what we are witnessing now is a liquidation in holdings of UK assets by foreign investors, particularly those who funded UK investments via Dollar and Euro accounts.

The coronavirus crisis has therefore created a huge demand for Dollars and Euros at Sterling's expense and until we get some sense that the market panic is over, we would expect the current dynamics to extend.

The Pound therefore looks prone to further losses in the near-term.

According to Peter Stoneham, an options market analyst at Thomson Reuters, the coronavirus outbreak may take the Pound "to places even Brexit couldn't reach".

"Sterling might drop through its post-Brexit-vote lows against the U.S. Dollar, Euro and Yen if risk aversion caused by the accelerating coronavirus outbreak continues," says Stoneham.

Jordan Rochester, FX Strategist at Nomura, says the Pound is on course to reach levels it would have tested in the event of the UK suffering a hard Brexit.

"The UK is a current account-deficit country with a higher exposure to financial risks, which is a key reason why we have maintained a short GBP/USD and long EUR/GBP position in recent weeks," says Rochester.

Nomura on Monday added to existing trades that seek to deliver a return on declines in Sterling as they consider "the potential for GBP to reach, what is in our view, it’s Hard Brexit equilibrium of 1.15-1.18."

- If you would like to talk to a foreign exchange specialist about the current slump in Sterling, please get in touch with our partners at Global Reach here.

HSBC Explains Why the Pound is Struggling

The British Pound has plummeted to its lowest level against the U.S. Dollar since 1985 as a sell-off that started in late February continues virtually uninterrupted, but the move has caught the attention of the new Bank of England Governor Andrew Bailey.

Bank of England Governor Andrew Bailey on Wednesday said the Bank is currently watching Sterling "very carefully", taking note of the current fall which will be addressed at the March 26 Monetary Policy Committee Meeting.

Bailey said there is no "single story" for the Pound's decline.

Bailey is right, there is no single narrative that explains the decline, particularly in a short and concise manner.

Economists and currency market professionals are nevertheless in agreement that the coronavirus market crisis is the main driver; but how exactly the crisis works against Sterling actually involves a number of factors.

David Bloom, Head of Global Foreign Exchange strategy at HSBC on Wednesday addressed Sterling in response to queries from clients, we find his explanation as being helpful:

"We have had a lot of questions about GBP and why it is falling so heavily. The answer is simple, The USD is rampant and GBP like many other currencies is behaving exactly as they say on the tin. So what does the tin say?

"The instructions are that this is a Risk on Risk Off world and your positioning in that spectrum determines your performance. So the most Risk On currencies are currently NOK, AUD, GBP and NZD in that order.

"Historically GBP as less RoRo than the commodity currencies it is now moving in sync with Why is this the case? One argument is that by leaving the EU, the UK has lost some of the safety of being linked t the big, closed economy of the EU.

"Currencies of the big, closed economies - USD, JPY, EUR - all tend to outperform in these periods and are more "risk off".

"Now we have "Global Britain" we also have a "global GBP" which is much more exposed to swings in risk sentiment than it was in the past."