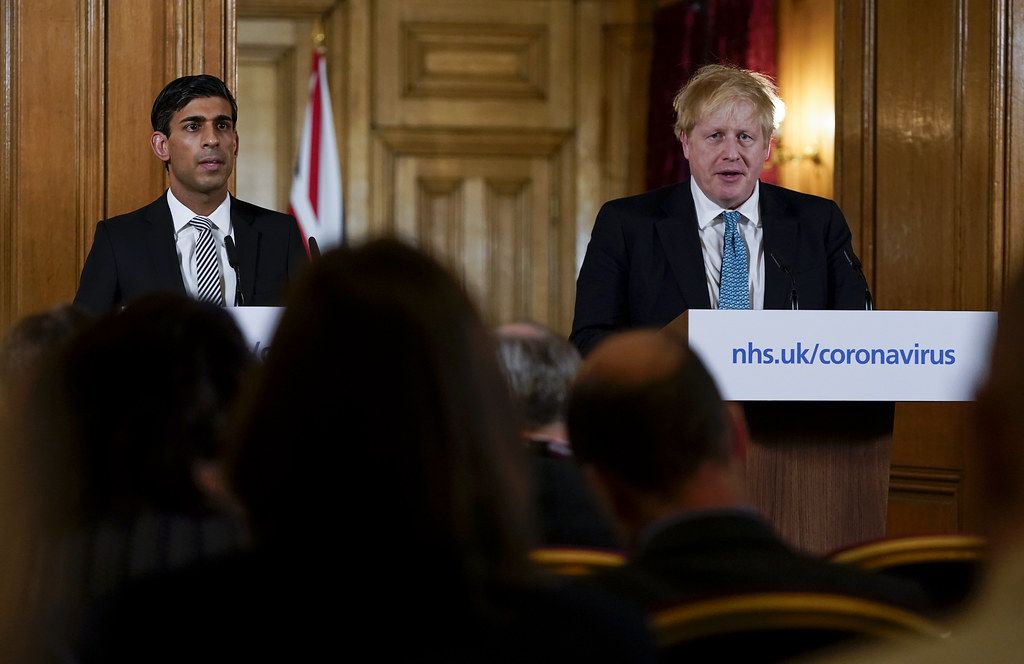 The British Pound has experienced another day of deep declines against the majority of the world's currencies with losses not only coming against the Euro and Dollar but also against those currencies it has tended to advance against in the current market backdrop, such as the Australian and Canadian Dollars.

The Pound has come under particularly intense pressure against the Dollar amidst a global scramble for cash that has inevitably seen the U.S. currency appreciate in value; the last time the Pound-to-Dollar exchange rate was this low was back in 1985 if we choose to exclude the technically-inspired flash crash of October 2016.

"Sterling has completed one of its steepest declines in memory by hitting its weakest level since 1985, excluding if you will the brief dive of the Oct 2016 'flash crash'," says Neil Wilson, Chief Market Analyst at Markets.com. "This is the worst sustained period of Sterling selling that I can recall."

The Pound-to-Euro exchange rate is under equal amounts of pressure with the pairing now reaching 1.0807, which represents a day-on-day fall of 1.77% which is a rare occurance.

"The British Pound has suffered heavily in the wake of the coronavirus crisis. The Pound has fallen aggressively over the past couple of weeks," says George Vessey, Currency Strategist at Western Union. "GBP/USD and GBP/EUR have both suffered their worst weeks since the financial crisis with GBP/USD falling an incredible 12 cents in six trading days."

The negative impact of Brexit on Sterling has been well documented over recent years, but when looking at this current selloff it is critical to recall a previous episode of intense Sterling selling: the 2008 financial crisis.

The current weakness actually a great deal in common with 2008: when investors are running scared the Pound suffers.

This is largely because the UK runs a persistent current account deficit, which is a deficit that results from a country importing more than it exports. The deficit is however masked by a steady flow of investor capital that is attracted to the UK, which in turn keeps the value of Sterling elevated above where it would be if it simply reflected imports/exports.

When global investor confidence evaporates - as is the case with the coronavirus - that supportive inflow of investor capital can disappear and we instead see outflows as investors seek out cash. In short, Sterling is particularly sensitive to global investor meltdowns.

"Sterling is trading to historic lows on combination of the safe haven Dollar bid, the corona virus stock market sell off and liquidation of long positions following the UK election. Meanwhile in the background the latest Brexit developments look to be pushing the chance of a negotiated deal further into the future," says Neil Jones, Head of Institutional FX Sales at Mizuho Bank in London.

"The Pound has fallen to its lowest level against the U.S. Dollar since 1985. An SOE country with a large external trade deficit requires funding via capital inflows. In a sudden stop of global capital flows - the currency adjusts to offset the lack of inflows. Can't fight this," says Viraj Patel, FX and Macro Strategist at Arkera.

How far will the Pound decline?

The Pound's sell-off has been substantial and surprising in equal measures: I am not aware of any analyst that forecast a decline below 1.10 against the Euro and 1.21 against the Dollar at the start of the month. Yet, here we are.

Given the voracity of the downside momentum, trend followers would advocate for further declines.

According to Peter Stoneham, an options market analyst at Thomson Reuters, the coronavirus outbreak may take the Pound "to places even Brexit couldn't reach".

"Sterling might drop through its post-Brexit-vote lows against the U.S. Dollar, Euro and Yen if risk aversion caused by the accelerating coronavirus outbreak continues," says Stoneham. 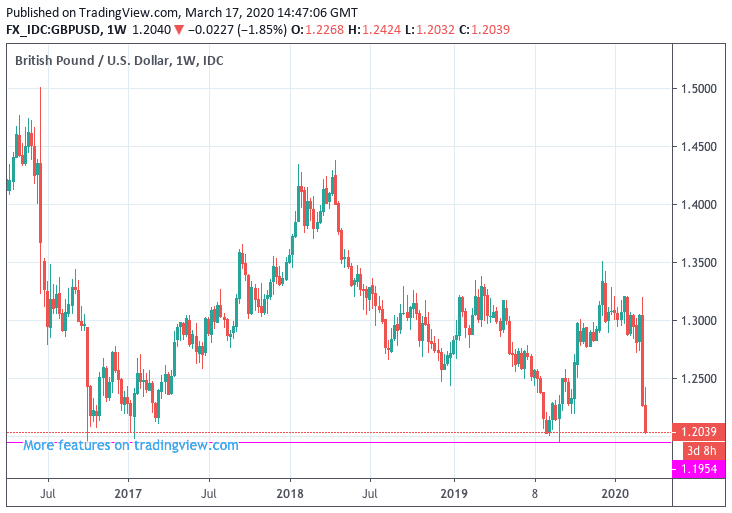 Nomura's Rochester says the Pound is on course to reach levels it would have tested in the event of the UK suffering a hard Brexit.

"The UK is a current account-deficit country with a higher exposure to financial risks, which is a key reason why we have maintained a short GBP/USD and long EUR/GBP position in recent weeks," says Rochester.

Nomura on Monday added to existing trades that seek to deliver a return on declines in Sterling as they consider "the potential for GBP to reach, what is in our view, it’s Hard Brexit equilibrium of 1.15-1.18."

"This is not because of Brexit, but it is also a level at which the UK's current account starts to turn into balance (with risks, it is even lower given the current environment). Finding this balance (and a lower pound with it) will be key, as low market risk appetite will make foreign investors more reluctant to fund the UK's current account deficit needs," adds Rochester.

Providing the backdrop to a weaker Pound are global markets that have endured substantial selling pressures since late February as investors prepared for a sizeable economic slowdown owing to containment measures aimed at slowing the spread of the coronavirus.

It is not hard to see that locking down countries such as Italy and Spain, while severely restricting activity in the U.S. and UK will not cause a notable slump.

In an escalation of the measures to slow the spread of the virus, on Tuesday the European Union announced it would be closing its borders for a month and EU leaders agreed to set up fast-track lanes at countries' internal frontiers to keep goods flowing across the continent.

A recession in Europe is now expected, with early surveys providing supporting evidence. German ZEW Expectations for March came in at -49.5, down from 8.7 in February. To put this 58.2 point fall into context, this is the largest fall ever recorded by the ZEW Institute, since they began their survey back in 1991.

The ZEW Institute says the only other time they have witnessed such a plunge in business expectations was during the financial crisis of 2008. Economists at Morgan Stanley now forecast that Eurozone GDP for the first half of 2020 could fall around 13%, with maximum stress being felt in the second quarter of 2020. Full-year growth is forecast to contracts 5.0% year-on-year.

The S&P 500 index in the U.S. is meanwhile already down about 28% from its record close in February, it looks like investors think the U.S. is headed for a significant downturn in economic output. Morgan Stanley economsts forecast a 4% annualised contraction in the second quarter of 2020 for the U.S.

The Pound did recover some losses late on Tuesday in the wake of a press conference in Number 10 Downing Street in which the Prime Minister and Chancellor of the Exchequer unveiled a set of measures to boost the UK economy. Sunak said the UK Treasury has arranged £330BN worth of guaranteed loans to be made available to UK businesses in order to cope with the coronavirus crunch, which is equivalent of 15% of UK GDP and ensures one of the largest fiscal responses to the coronavirus outbreak by any country to date.

"In peacetime we have not faced a fight like this," said Chancellor Rishi Sunak as he launched what he said was "an unprecedented package of support to businesses ... I said whatever it takes, and I meant it."