The first timely survey of the Germany economy that will account for the impact of the coronavirus outbreak confirms a substantial deterioration in business sentiment owing to the virus, leading economists to say Europe's largest economy is now in recession.

German ZEW Expectations for March came in at -49.5, down from 8.7 in February. Consensus expectations from economists was for a less severe reading of -26.4 and the miss in expectations might explain the Euro's underwhelming performance on global FX markets at the time of writing.

To put this 58.2 point fall into context, this is the largest fall ever recorded by the ZEW Institute, since they began their survey back in 1991.

The ZEW Institute says the only other time they have witnessed such a plunge in business expectations was during the financial crisis of 2008.

"The economy is on red alert. The financial market experts currently expect to see a decline in real gross domestic product in the first quarter, while also considering a further drop in the second quarter to be very likely. For the whole of 2020, the majority of experts currently expect a decline in real GDP growth of approximately one percentage point as a result of the corona pandemic," said ZEW President Professor Achim Wambach. 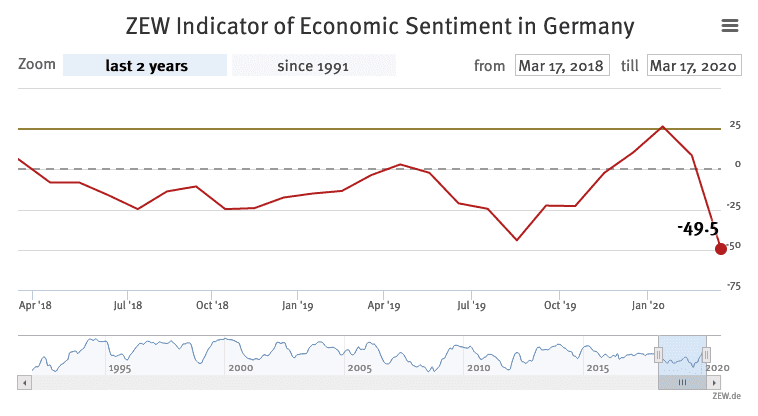 The release of the data comes as the Euro exchange rate complex registers losses: The Euro-to-Dollar exchange rate is down close to 1% at the time of writing with 1.1057 being recorded on the market.

This decline in the headline EUR/USD rate has allowed the Pound-to-Euro exchange rate to recover some of the ground it has lost over the 24 hours to quote at 1.0986, giving a EUR/GBP rate of 0.9104.

"The euro is heavy," says Marc Chandler, Managing Director at Bannockburn Global Forex. "It was not able to sustain the push above $1.12 yesterday and is returning below $1.11 in the European morning. Yesterday's low was near $1.1050, and that is the next immediate target. It corresponds to a (61.8%) retracement of the rally from last month's low below $1.08 to the recent high just shy of $1.15."

Chandler says the next area of support is around $1.10. Sterling is extending its slide. It has been sold below $1.22, as its losing streak continues to the sixth consecutive session. It is at its weakest level since last September.

The Euro has been one of the stand-out beneficiaries in the global FX market during the stock market meltdown that ensued when it became clear the coronavirus outbreak had started to spread into Western economies.

The rise in the Euro has however largely been technical in nature, with two factors being responsible: 1) the flow of funds back into Eurozone-based accounts as investors liquidated global stock market holdings and 2) the exiting of bets that were positioned to benefit from declines in the Euro. The market was heavily engaged in bets against the Euro; reversing this overweight position has inevitably provided the single currency with support.

The Euro could therefore have been defying gravity when the fundamentals of the economy were considdered, after all the Eurozone is particularly exposed to any global recession thanks in part to Germany's heavy reliance on exports.

We had warned that there might come a time when the global market sell-off flipped from being supportive of the Euro, to negative. 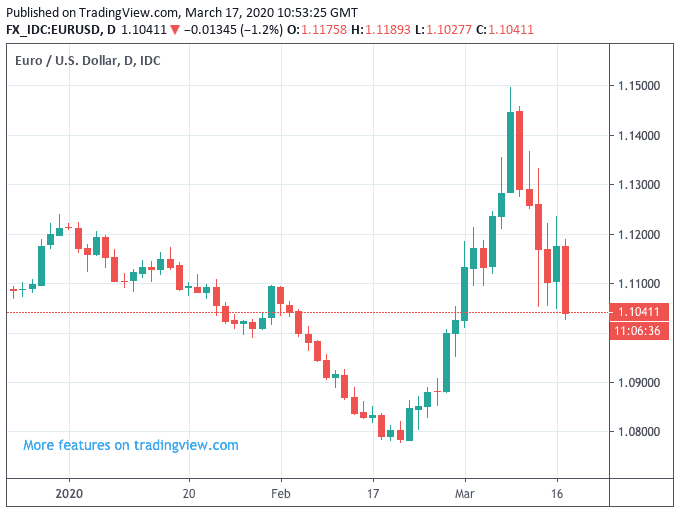 It is of course too soon to say this has occurred, but we can see Germany is headed for recession and the severity of this recession could weigh on the currency.

"In our view, the German economy is likely to experience a recession in the first half of the year, in terms of the plain GDP data probably getting close to numbers seen during the financial crisis," says Carsten Brzeski, Chief Economist, Eurozone and Global Head of Macro at ING Bank.

During the previous financial crisis the economy fell by 1.6% quarter-on-quarter in the 4th quarter of 2008 and 4.7% in the first quarter of 2009, mainly driven by a sharp fall of exports.

"In the current crisis, the hits will come from several sides. Based on the currently available information, we now expect the German economy to shrink by more than 1.5% YoY in 2020," says Brzeski.

ING do however say they believe the response of German authorities to the crisis is a credible one and while it might not cure the economy of its coronavirus woes, it could certainly soften the blow.

"We take the government’s measures and communication as clear evidence that this ‘whatever-it-takes’ is credible. We expect more traditional fiscal stimulus in the months ahead," says Brzeski.

Germany has announced a combination of investments in R&D to find a vaccine and to equip the health care sector, a stepping up of already existing longer-term investment plans, tax deferrals, an easing of the hurdles to apply for short-time work schemes and an increase in government support for these schemes as well as bank guarantees and liquidity support of more than €500BN.

"Think of tax forbearance, temporary tax cuts or the government taking over rent or other cost payments from SMEs. Even additional measures will in our view be insufficient to avoid a recession in the first half of the year but they could pave the way towards a solid path to a strong recovery," says Brzeski.