Economists give their predictions on whether or not the Bank of England will cut interest rates on Thursday, but all acknowledge the outcome is ultimately too close to call with any sense of real conviction.

Money market pricing suggests the odds of a Bank of England interest rate cut at Thursday's meeting is as close to a 50/50 split as possible, making this one of the more difficult policy decisions to predict for some time.

For Sterling exchange rates, the outcome promises volatility as we note in today's lead piece, that looks at some of the FX forecasts being offered by some of the industries leading strategists.

The analyst and economist community are equally divided on what the Bank will do, but they are almost unanimous in saying the outcome is so difficult to predict that they have little conviction in their predictions.

"This is the least predictable UK MPC announcement for some time," says Philip Shaw, Economist at Investec. "The economic landscape seems to have taken a turn for the better and this may encourage the remaining seven to carry on voting for the status quo. We expect the vote on rates to be 7-2, as in the previous two meetings."

"Given recent evidence, economic conditions do not currently appear to justify an easing in policy. That said we expect the economy to carry a modest degree of momentum and our base case remains that the Bank rate will remain at 0.75% throughout 2020," adds Shaw. 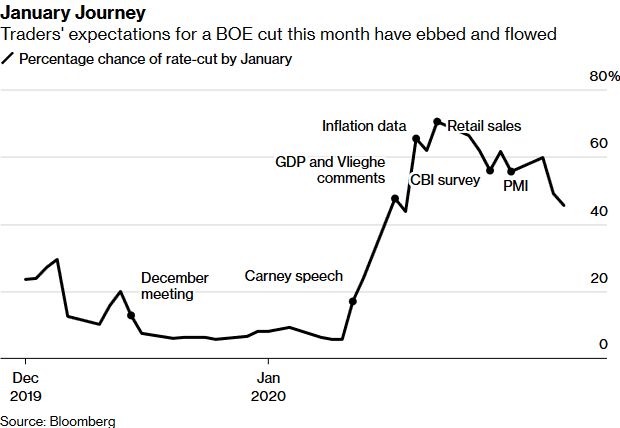 The evolution of expectations for a rate cut. Image courtesy of Bloomberg.

James Smith, at economist at ING agrees with this assessment, noting "sentiment indicators have virtually all improved since the election result, with business optimism and new orders turning higher.

Most notably, the CBI business survey for January showed a sharp improvement in sentiment, while the Deloitte CFO survey showed a substantial boost in sentiment amongst those who hold the purse strings in the economy. "Admittedly we aren’t convinced this will last given the myriad of risks linked to trade talks this year, and that may see up to four MPC members vote for easing at this month’s meeting. But we think most policymakers will remain comfortable with their previous ‘wait-and-see’ stance and we think the most likely outcome is an ‘on hold’ decision," says Smith.

Crucially, the IHS Markit PMI survey for January confirmed the trend of improvement, with the manufacturing PMI rising from 47.5 to 49.8 and the Services PMI rising from 50.0 to 52.9. Monetary Policy Committee member Gertjan Vlieghe made particular mention of the need for the PMI to improve meaningfully if he was to opt to keep interest rates unchanged.

Ahead of the Bank of England decision, Lloyds Bank have released their January Business Barometer report, and the findings echo the improvements in sentiment registered by other surveys.

Overall business confidence jumped up to 23% in January from 10%, a 14‑month high and back near the historical mean. Trading prospects rose for a second month, to 22% from 18%, the highest since June 2019 while economic optimism surged to 23% from 2%, an 18‑month high.

"To us, this – along with the easing in global trade tensions – provides strong justification for the BoE keeping interest rates unchanged at 0.75% at this juncture," says Robin Wilkin, Cross Asset Strategist at Lloyds Bank.

Paul Dales, Chief UK Economist at Capital Economics says the decision will be close, and maintains the view interest rates will remain at 0.75% in 2020.

The next move in interest rates is expected to be a raise, but this is unlikely to happen until 2021.

Looking for a Cut

There are three reasons why the Bank might opt to cut today.

1) Speeches from Monetary Policy Committee members earlier in the month suggested they were now leaning towards a rate cut.

Governor Mark Carney sparked a rise in interest rate cut expectations - and weakness in the Pound - in a speech in which he said he could be tempted to cut rates if economic data did not improve.

2) Economic data has showed a sharp weakening in economic growth towards the end of 2019, with November GDP coming in at -0.3%, with retail sales growing by just 0.9% in November-December, a time when the Christmas period would have been expected to significantly boost sales.

By cutting interest rates the Bank would be offering the economy a stimulus.

3) inflation has fallen sharply and was at 1.3% in December which places it well below the Bank's 2.0% target. The economics textbooks say central banks can stimulate inflation by cutting interest rates

"Despite this week's positive sentiment data, we continue to expect a fairly dovish MPC, with the BoE cutting its base rate for the first time in just over three years, officially ending the tightening cycle," says Sanjay Raja, Economist at Deutsche Bank.

Above: The Bank's most recent set of projections from August 2019. They will be updated today.

Raja concedes, "it certainly won’t be a slam dunk, however."

Deutsche Bank thinks the Bank of England will ultimately opt for a risk management approach to monetary policy, as recently highlighted by Carney, Saunders, and Haskel.

"What does this mean in practice? Simply put, it means cut early and be prepared to cut more if the economy doesn't shake off its sluggishness," says Raja.

Fabrice Montagné, an economist at Barclays, says while the PMIs for January show a pick up in economic sentiment and activity, they nevertheless remain at or below long term averages, with no guarantee that the improvement will be sustained into the second half of 2020.

Barclays expect an interest rate "to insure the economy remains on the recovery path".

"Current levels are barely at their long term average and optimism seen in forward looking components or orders have failed so far to translate into stronger employment component, suggesting that the improvement may be temporary. Given the economic fall-out at the end of 2019, growth at trend will not suffice to absorb economic slack and push inflation back to target. Hence we believe that the BoE has a strong case to cut in order to maximise chances of the economy remaining on the recovery path," says Montagné.