- Data may seal the deal for a January interest rate cut.

Pound Sterling extended it's 2020 losing run after official statistics revealed a steep and surprise fall in inflation for the month of December, all but sealing the deal for a Bank of England (BoE) interest rate cut later this month.

Inflation fell from 1.5% to 1.3% in December, the Office for National Statistics (ONS) said, when markets were looking for it to remain unchanged at 1.5%. Meanwhile, the more important core inflation measure slumped by 40 basis points to 1.3% when consensus was for an unchanged reading of 1.7%.

Core CPI is seen as a more reliable measure of domestic price trends because it excludes commodity and regulated price items from the goods basket, but both inflation measures are now running substantially below the 2% target of the BoE although December's steepest decline came in the core metric.

In other words, inflation is dissipating because of weakness in the underlying economy rather than movements in the price of oil, heaping more pressure on the BoE to finally respond to a steady weakening of the economy by cutting borrowing costs for companies and households. 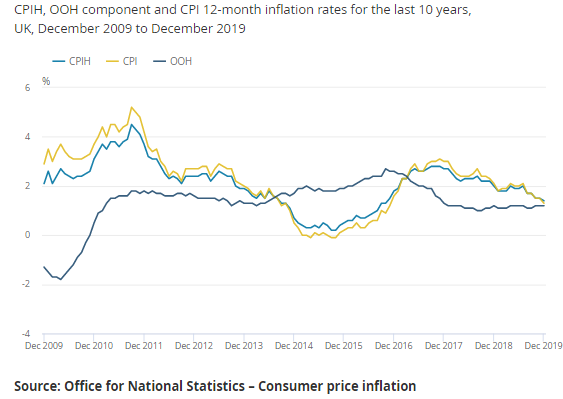 Above: ONS graph showing changes in inflation during the decade to December 2019.

Four major developed world central banks cut interest rates last year as the global economy softened amid the U.S.-China trade war but the BoE and some others sat on their hands opting to await the outcome of Brexit negotiations.

The BoE has left Bank Rate unchanged at 0.75% since August 2018 and has consistently prepped markets to expect hikes in the years ahead because it's always forecast rising or resilient price pressures rather than falling inflation.

But earlier this week the ONS said the economy contracted by 0.3% in November, leading the annual growth rate to fall to a fresh multi-year low of 0.6%, which is far below what the BoE calls 'potential growth' and what is best thought of as the economy's inflation-producing rate of growth. "The lowest inflation in three years justifies a BoE rate cut. A central bank would need a good reason to not ease policy with inflation 70bp below target and likely to remain there by mid-year," says Robert Wood, UK Economist at BofA Global Research.

Potential growth is estimated to be around 1.25% so with the economy moving at 0.6% and inflation way below target, a rate cut could now be inevitable. The implied probability of a January rate cut rose as high as 64% in response to Wednesday's data and Sterling duly fell.

In sympathy with the heightened odds of a cut, the Pound-to-Euro rate fell below 1.17 to trade as low as 1.1665, while the Pound-to-Dollar rate slipped through 1.30. In addition, the Pound fell against all other major currencies. 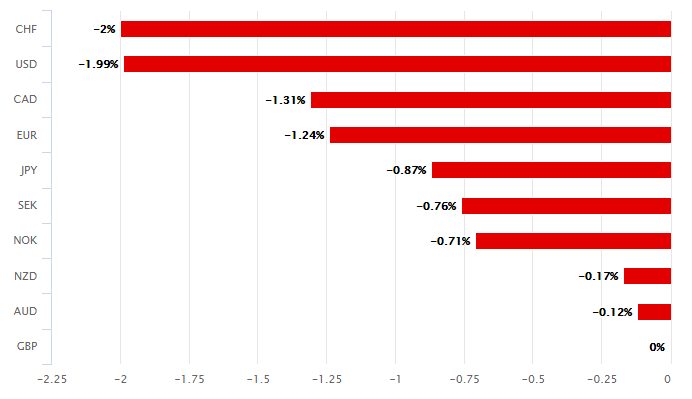 Wednesday's data comes amid a shift at the BoE with three senior policymakers now suggesting they could vote to cut rates as soon as this month if they do not see signs of a post-election pickup in economic data over the coming weeks.

"UK inflation data is disappointing. The markets attention is heavily focusing upon the mpc voting intentions right now, which we understand from recent comment is post election data dependent & likely to provide an offered tone to the GBP," says Neil Jones, head of FX sales to financial institutions at Mizuho.

Currency markets care about inflation data because it dictates the interest rate policy that influences the capital flows as well as speculative short-term trading activity which govern the Pound. Higher inflation normally tends to beget higher rates and an often-stronger currency but lower rates have the opposite effect.

The BoE has tended to forecast higher prices because it assumes that Brexit reduces the 'supply potential' of the economy, which it says should lead to slower growth while also making the UK more susceptible to increases in inflation. The slower growth has been forthcoming but with the Sterling-induced post-referendum spike put to one side, the higher inflation has so-far not materialised. Rather, the consumer price index has retreated steadily over the last two years from the 3.1% peak of November 2017. 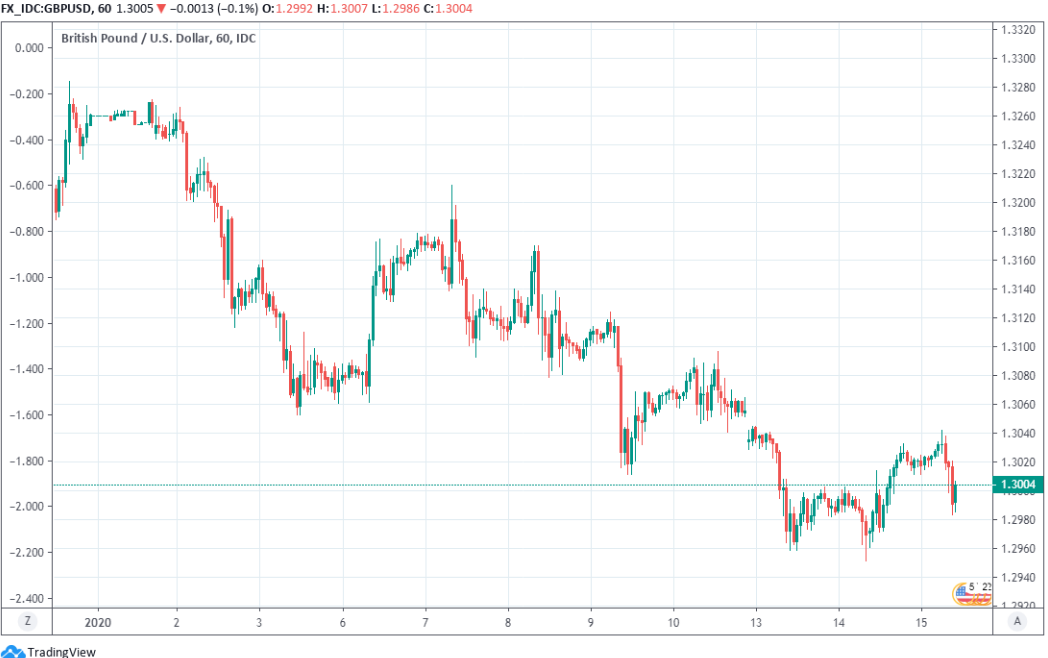 "Inflation is back on a downward trend, nudging the MPC even closer towards a rate cut," says Ruth Gregory at Capital Economics. "The figures might be enough to tip the balance on the MPC towards an imminent rate cut. Everything now depends on the economic news over the coming weeks. If the data fail to improve, interest rates could be lowered as soon as 30th January. But if the figures continue to show signs of a turnaround, most MPC members may be content to sit on their hands. It will be a very close call."

Governor Mark Carney, Silvana Tenreyro and Gertjan Vlieghe have all turned 'dovish' this last week and when combined with Michael Saunders and Jonathan Haskell, the nine-strong Monetary Policy Committee could now have a majority that favours a January cut.

Carney departs the BoE on March 16 after extending his term to see the bank through recent Westminster turmoil as well as the January 31 EU exit, although this month's is his final policy meeting. He said said last week the bank still anticipates an economic recovery but that more short-term weakness would mean it's prudent to buttress that pickup with monetary stimulus.

Meanwhile, Saunders said this Wednesday that a cut could be necessary to prevent a "sustained undershoot" of the inflation target and that one would no longer be "precautionary," although he already voted to cut in December. 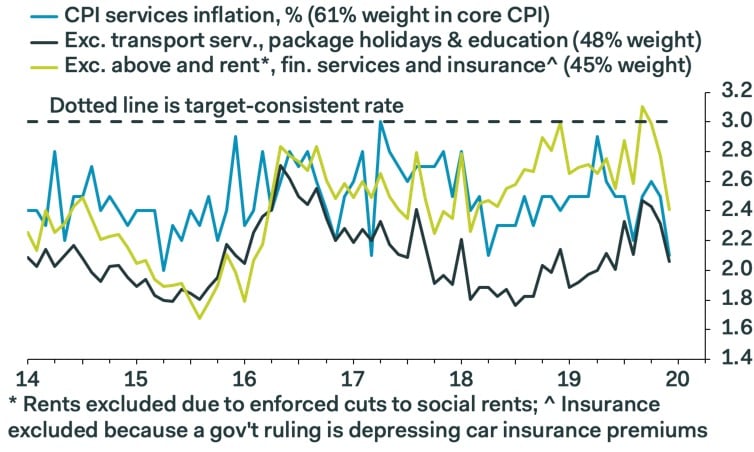 Above: Pantheon Macroeconomics graph showing changes in services sector inflation and its components.

"Core goods inflation likely will edge down over the course of this year, in response to sterling’s modest appreciation. The MPC, however, likely will remain focussed on domestically-generated inflation, which we expect to return to its rising trend, in response to the tight labour market and likely pick-up in GDP growth in the first half of this year. We continue to think, therefore, that the MPC will hold back from cutting Bank Rate this year," says Samuel Tombs, chief UK economist at Pantheon Macroeconomics.

Pricing in the overnight-index-swap market implied on Wednesday a month-end Bank Rate of 0.60%, which is way below the current 0.75% level but above the 0.50% that would prevail following a typical 25 basis point cut. That implies both upside and downside to Pound Sterling exchange rates in the new month, with the exact outcome highly contingent on the BoE's January 30 decision.

Tombs, who's previously been ranked by Bloomberg and Reuters as the UK's top inflation forecaster, says price pressures and economic growth will be sufficient enough to ensure the BoE just sits on its hands in the months ahead. And there are several sets of data due out in the coming weeks that have scope to bring the MPC around to that view. 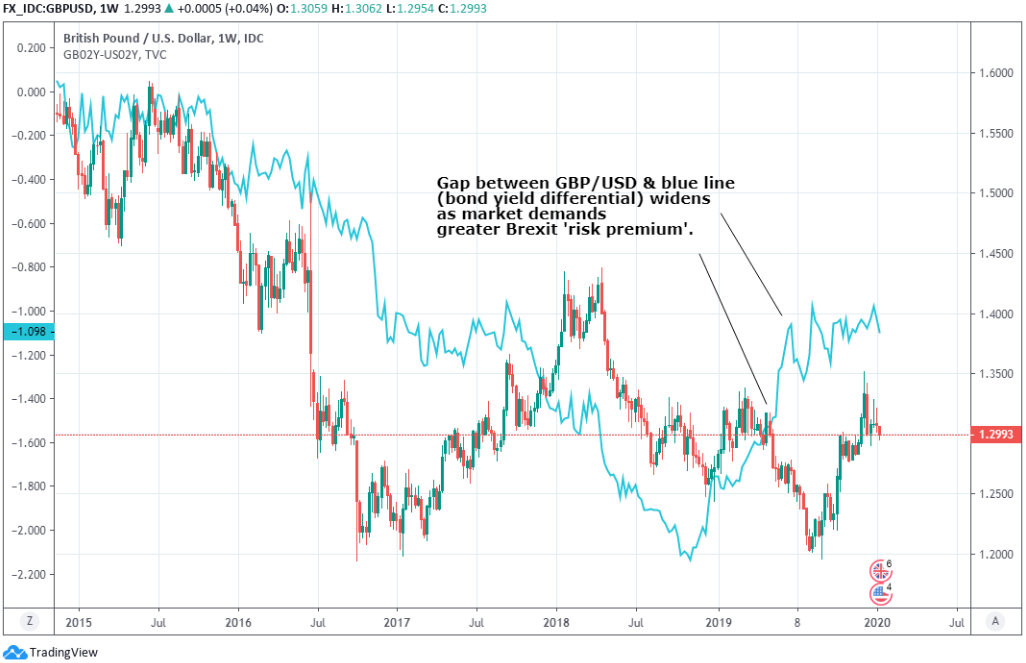 "The GBP is falling as the implied odds of a 6-3 or 5-4 MPC vote at the January meeting creep up (much to our chagrin given our tactically bullish GBP bias on a 1-3M basis). The 1.2850 level in GBPUSD will be under threat if the pair starts to record daily closes below 1.3000," says Stephen Gallo, European head of FX strategy at BMO Capital Markets in an earlier note to clients.

Friday's retail sales numbers for December will be key in shaping market expectations of the BoE and the pathway trodden by Pound Sterling up ahead. So too will the Tuesday 21 jobs figures and the Friday 24 flash PMI surveys of the UK's three main industries from IHS Markit but arguably the greatest impact on the thinking of the MPC will come from the Wednesday 29 HM Treasury autumn forecast statement.

Treasury's statement will reveal newly updated government forecasts for the economy up ahead as well as providing markets with a sneak peak at the March budget that's expected to see the new government of Prime Minister Boris Johnson splash as much as £60 bn worth of cash in order to get the economy going again. Pound Sterling will scrutinise the statement closely because any large stimulus might lessen the perceived need for rate cuts from the BoE.

"We can think of at least 3 reasons why investors should buy the dip. One: weak economic data from the UK are "old news" and we are in a "new world". Two: some commentators still appear to be in the "shock & denial" or "anger" phases of the Brexit grieving process and therefore wedded to a certain bias. Three: looser BoE policy in the short-run should make the rebound in the GBP from any forthcoming "fiscal impulse" even larger," Gallo says.