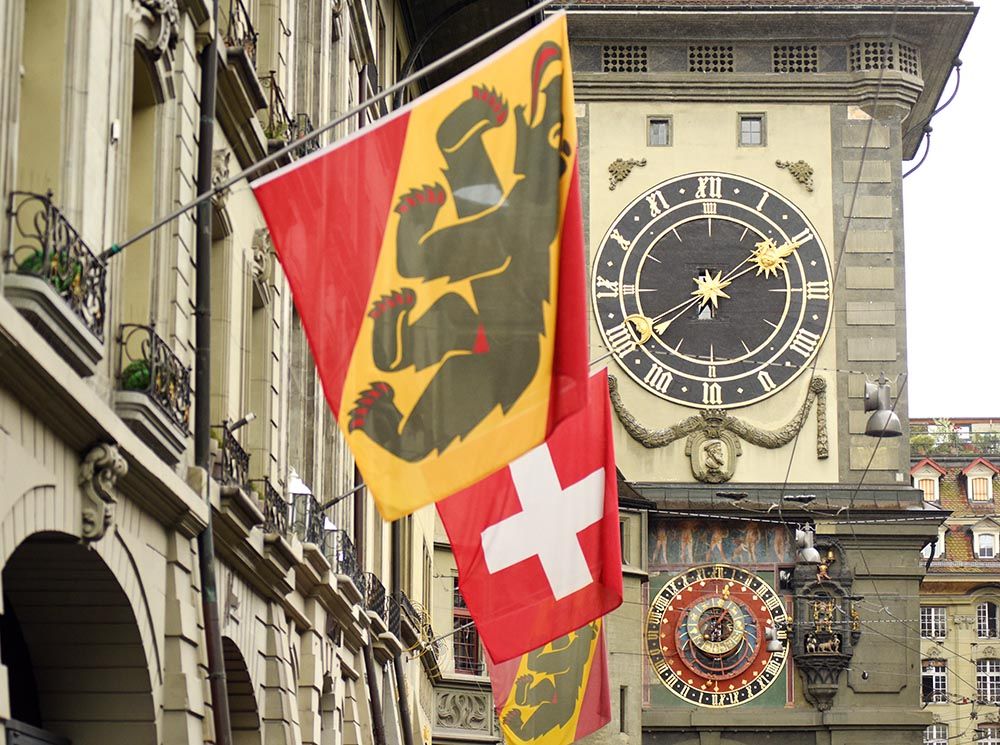 - GBP/CHF has found a hard floor and is plateauing

The Pound-to-Swiss exchange rate is trading at around 1.2620 at the time of writing, up on the current week's low which is registered down at 1.2539, with studies suggesting the likely development of a sideways trend short-term but with a downside bias over the longer, multi-day timeframe.

The 4-hour chart below shows the pair in a steep downtrend since the start of May. Given the old adage that “the trend is your friend” this confirmed downtrend would normally be expected to continue. 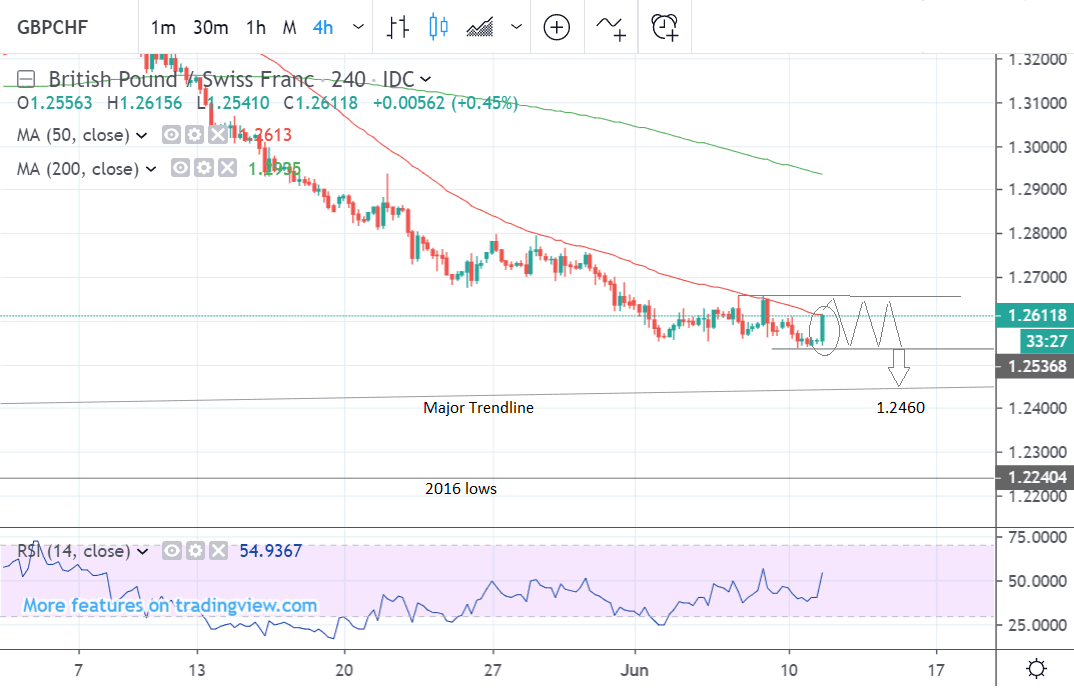 However, the pair has just surged higher in a long green up bar (circled) during the last four hour period and this is an early sign the downtrend may be reversing.

Added to this steadily rising and converging RSI momentum indicator in the bottom panel and it suggests the downtrend may be waning.

There is a good chance the pair may simply continue trading in a sideways range between 1.2550 lows and the 1.2650 range highs over the next week.

Yet the overall trend is down, suggesting a negative bias to the outlook, and the possibility of more weakness on the horizon.

The dominant trend is still technically down and this trumps all other considerations and we are, therefore, bearish overall, we are only bearish on the condition that the pair can break to new lows.

A move below the 1.2541 June 10 lows, would probably curry conviction for a move down to a target at support at 1.2460, a major trendline drawn from the 2016 lows. Otherwise a neutral sideways trend is forecast.

This forecast is for the remainder of the week and start of next week as the 4 hour chart gives us an indication of the short-term outlook spanning around 5 trading days ahead.

The daily chart tells a similar story - the pair is in an established downtrend which is likely to continue but the RSI momentum indicator in the bottom panel has formed an elegant bottoming pattern and is turning higher, suggesting bullish tendencies. 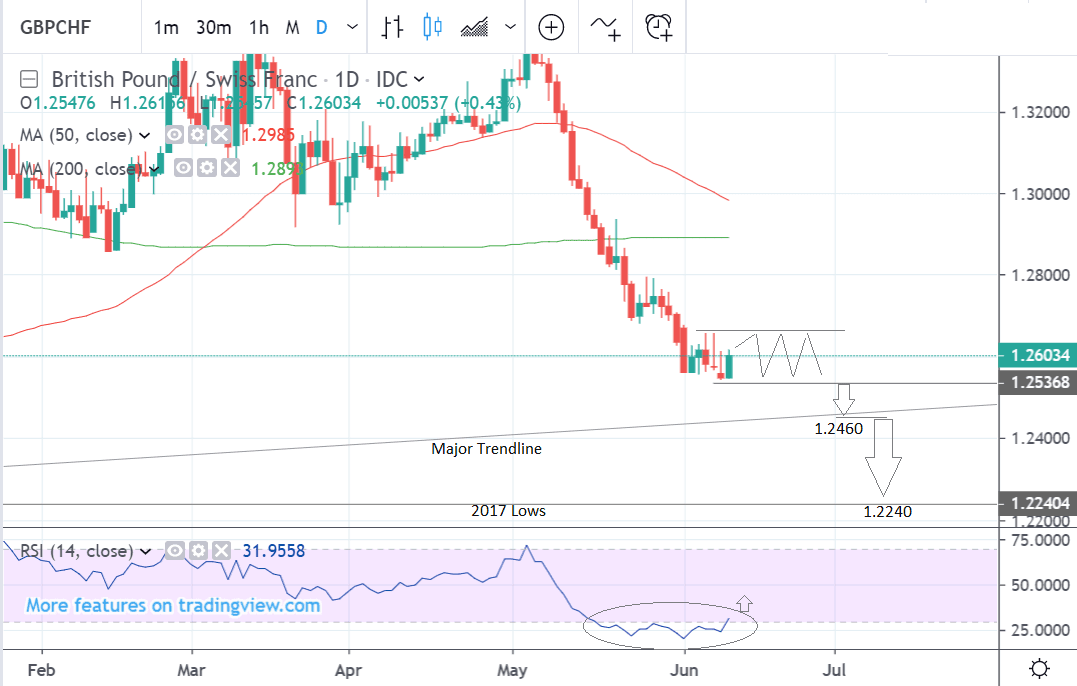 The RSI has arguably formed a reversal pattern in the oversold zone, and this is a bullish sign for both the RSI and the underlying asset. The exit out of the oversold zone is a signal to open new bullish bets, and this has just occured.

These contradict the overall bearish trend, and the resolution to that paradox might be in the trend to go sideways in a range between 1.2540 and 1.2650 over the next 1-4 weeks.

As in the short-term forecast we are still overall bearish, but only on the condition the pair can break below the 1.25410 June 3 lows. Such a break would probably then lead to a move down to a target at 1.2460 initially as on the 4hr chart and then possibly even lower to the next target at 1.2240 and the 2017 lows.

We use the daily chart to give us an indication of the medium-term outlook which includes the next couple of weeks to a month.

The weekly chart suggests the possibility the pair could approach some major support over the long-term and probably plateau. The 2017 and ‘18 lows at around the 1.22 level are likely to keep the pair supported for some time yet. 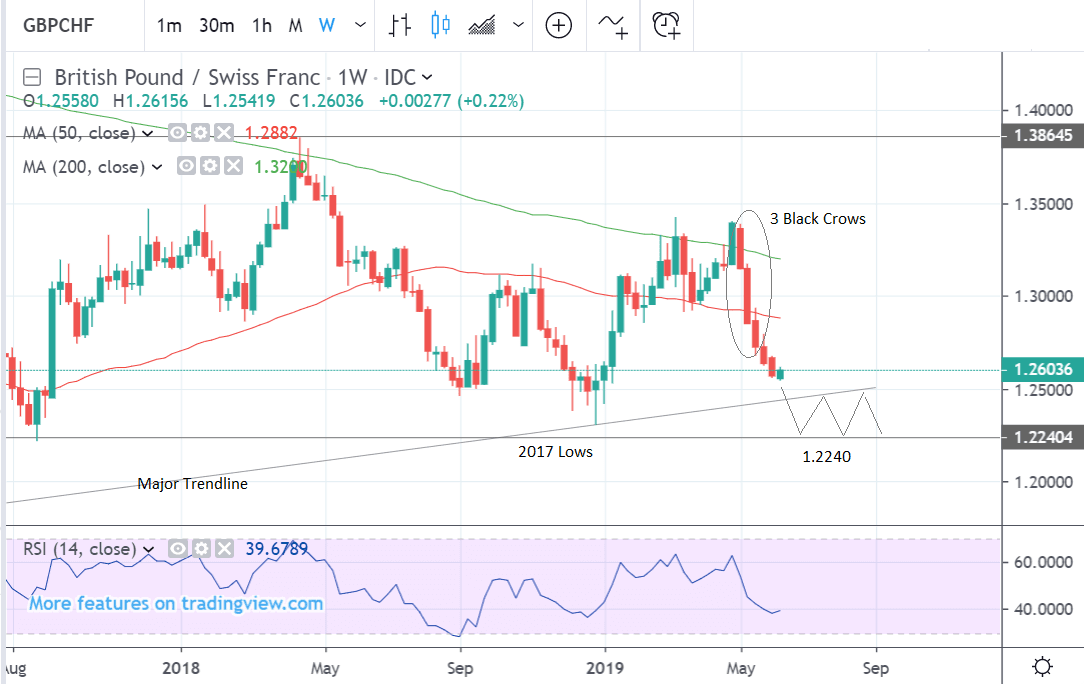 Whilst we note the 3 black crows Japanese candlestick pattern which formed after the early May highs (circled), and which consists of three long, red, down bars in a row, this is not enough on its own on which to base a bearish call.

The main drivers of the Swiss Franc are likely to be the policy meeting of the Swiss National Bank (SNB) and global investor risk appetite, due to its safe-haven credentials.

The SNB is set to meet and decide future monetary policy on Thursday, June 13, at 8.30 BST. It is expected to keep interest rates unchanged in negative territory (-0.75%).

Negative interest rates would normally be expected to weaken a currency as they usually make the country a less attractive destination for foreign investors to park their capital, however, this is not the case for the Franc which has risen due to increasing safe-haven demand as a result of the escalation in trade tensions between Trump and Beijing.

In the past the SNB has had to use monetary policy and interest rates to actively devalue the currency because of its strength, because otherwise, it increases the price of Swiss exports inordinately, making them unaffordable.

The Franc is currently on the edge of the ‘danger zone’ of strength where the risk of SNB intervention increases, especially versus the EUR its main trading partner. For this reason, many analysts are saying there is a chance the SNB could turn slightly more dovish at the meeting.

“CHF is now trading at its strongest level against EUR after the SNB changed its assessment slightly last September. The BIS-based nominal effective exchange rate also shows strong CHF appreciation recently partly because of EM currency weakness,” says Nomura, in a note. “Thus, the SNB is unlikely to change its valuation this week - our main scenario. Nonetheless, a slightly more dovish tone in its statement is likely, even after positive inflation data.”

The Franc is a safe-haven currency which means it benefits from inflows during times of turbulence - much like gold.

The Franc has been doing relatively well, therefore, following the recent escalation in the conflict between the U.S. and its trading neighbours.

This will probably continue to be the case despite trade tensions easing recently after President Trump decided against raising tariffs on Mexican imports.

Nevertheless, the battle between the U.S. and China is likely to continue in the foreseeable future, providing support for the Franc.

On Monday better-than-expected Chinese data improved the global outlook after it showed a rise in the trade surplus from $14bn to $42bn, when only a $21bn rise had been forecast. Yet on deeper analysis the data was not as positive as initially thought.

The real reason for the surge in the Chinese trade surplus was not increased demand for its exports but as a result of exporters frontloading their orders so as to avoid the increase to the 25% tariff in June. When this wears off the figures will continue to decline.

“The ‘front-loaded trade’ in order to avoid new tariff signals exports growth should worsen in the second half of the year, while the deeper contraction in imports is a proof of weakness in domestic demand,” says Actionforex.com.

The general relationship between the U.S and China is also unlikely to improve.

The U.S. sees China as a geopolitical threat and its recent tough line on Huawei is partly due to maintaining national security as much as the protection of intellectual property, or trade; all of which appear to be interrelated, anyway.

Given security concerns associated with tech, trade tensions are likely to get worse, not better, because it is not just a question of trade, also of power.

All these factors mean the Franc is likely to be supported for the foreseeable future.