-Mexico retaliates as new tariffs raise the threat of a US NAFTA withdrawal.

-Economy disappoints, with growth of just 1.3%, beneath 1.8% forecasts.

The Canadian Dollar slumped Thursday after President Donald Trump said the US will now levy tariffs on imports of steel and aluminium from the European Union, Canada and Mexico, placing relations between the North American Free Trade Agreement countries under even further strain.

The tariffs will go into force at midnight Thursday after the White House decided not to renew an earlier exemption that was due to expire on June 01. At the same time, previously exempt Australia, Brazil and Argentina have won a permanent exemption after agreeing measures with the White House that are designed to reduce their metals exports to the US.

Mexican economy minister Ildefonso Guajardo said in response that the country will target a range of US products with retaliatory tariffs which, according to comments made by US Commerce Secretary Wilbur Ross earlier on Thursday, might only beget an even harsher response from the White House.

Secretary Ross, in an interview with French newspaper Le Figaro, had suggested the announcement was likely to come at some time on Thursday.

“We don't want a trade war. It’s up to the European Union to decide if it wants to take retaliatory measures. The next question would be: how will the Trump react? You saw his reaction when China decided to retaliate. If there is an escalation it will be because the EU would have decided to retaliate,” Ross said. 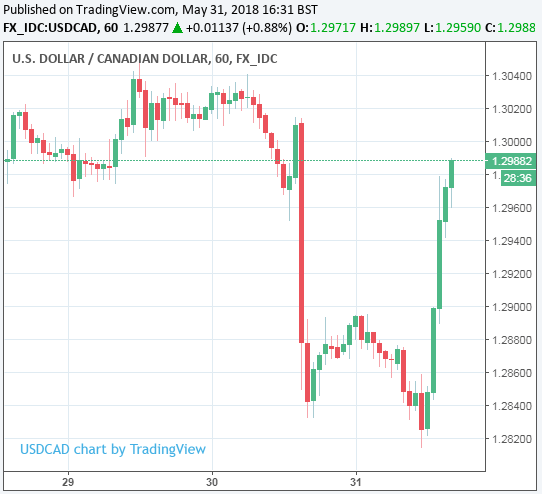 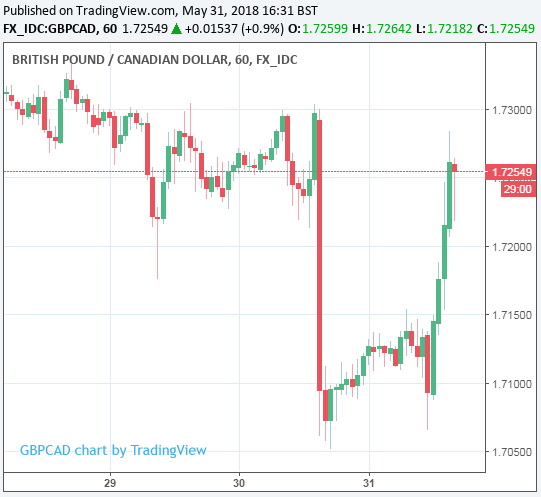 Both exchange rates had been marked lower during the morning session but concerns the tariff announcement will hinder an already-elusive deal to save the North American Free Trade Agreement have turned the tables on the Loonie.

NAFTA on the Edge?

Talks to renegotiate the North American Free Trade Agreement have been going nowhere fast. In fact, NAFTA risks are seen as having risen recently because of renewed bellicose rhetoric from the White House.

"The imposition of steel & aluminium tariffs would also be viewed as a negative signal over the progress of NAFTA talks. It should provide some caution over the scope for the Canadian dollar to extend gains in the near-term," says Derek Halpenny, European head of global markets research at MUFG.

Canadian Prime Minister Justin Trudeau spoke with both President Trump and Vice President Mike Pence Wednesday in an apparent effort to prevent the metals tariffs and advance a solution to the impasse over the future shape of NAFTA. Although Thursday's announcement suggests this was in vain.

Moreover, fears are that President Donald Trump, under electoral pressure ahead of the November midterm elections, could feel increasingly incentivised during the weeks ahead to announce a US withdrawal from NAFTA in order to pressure Canada and Mexico into submission over several contentious issues that have had talks deadlocked.

A withdrawal notification would set the clock ticking on a six month termination period during which the deal could still be renegotiated, although under an increased level of pressure. Analysts have previously estimated a US withdrawal could hit the Canadian economy and see its currency fall by as much as 20%.

Canada's economy grew by 0.3% during March, according to Statistics Canada data, which was down from the 0.4% growth seen in February but ahead of the 0.3% consensus. However, a January contraction and slower growth in February and March meant the Canadian economy expanded at an annualised rate of just 1.3% for the first quarter overall.

This quarterly expansion was far below the 1.8% anticipated by the market and beneath the rate of growth seen in each of the previous two quarters. Although the number is in line with earlier forecasts from the Bank of Canada, it may still come as a disappointment given rate setters said Wednesday the economy probably grew faster than they previously expected.

Statistics Canada attributed the slowdown a reduced rate of household spending, lower exports of non-energy goods and a decline in housing investment. 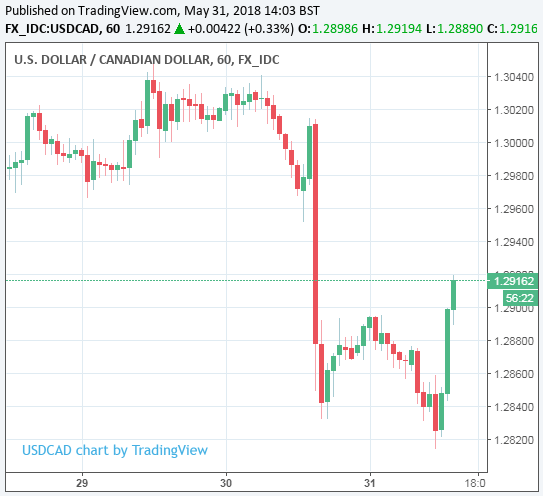 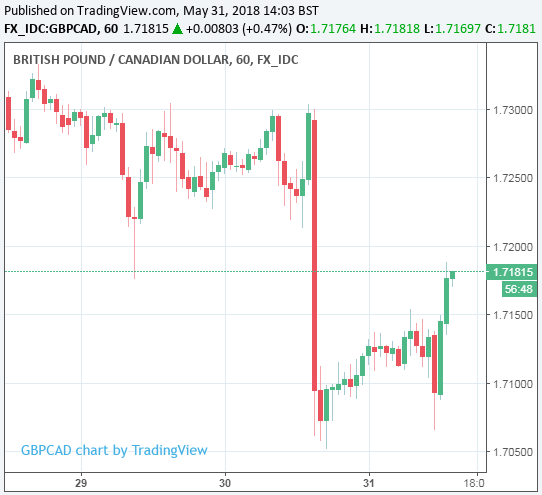 "The Canadian economy looked decidedly more sluggish than where expectations had it pegged for Q1," says Royce Mendes, an economist at CIBC Capital Markets. "The two stalwarts of the recovery, housing and consumption, both showed signs of fatigue in this report. Inventories and net trade also provided a drag over the quarter."

Changes in interest rates, or hints of them being in the cards, impact currencies because of the push and pull influence they have on international capital flows and their allure for short-term speculators.

Traders are currently eyeing the Bank of Canada's (BoC) July meeting for what will then be its fourth interest rate rise inside of 12 months, which would take the Canadian cash rate up to 1.5%, after the bank gave a strong hint of the likely move in a statement Wednesday.

"Overall, the Q1 undershoot versus expecations will weigh on the loonie today, as traders size up the pace of hikes after a likely July move," Mendes adds.

Considering the bank was expected to push ahead with a July rate rise even when its pessimistic growth forecasts appeared warranted, the Canadian Dollar has been relatively insulated from the GDP disappointment Thursday because the bar for the BoC to abandon its July hike is now seen as high. 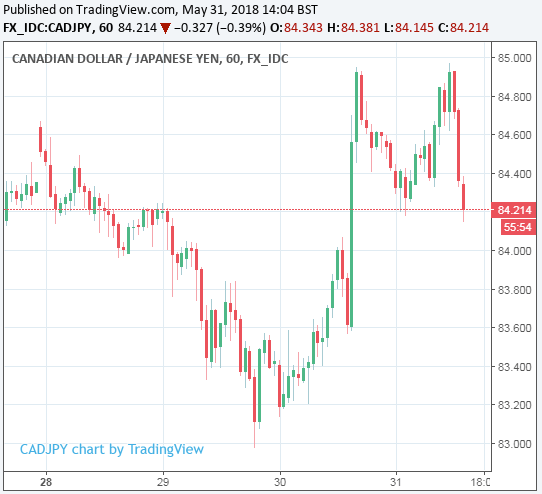 Canada's Dollar was quoted lower relative to all other developed world currencies following the GDP release, barring the low-yielding Japanese Yen, when the Loonie had previously traded higher against most of the G10 basket. 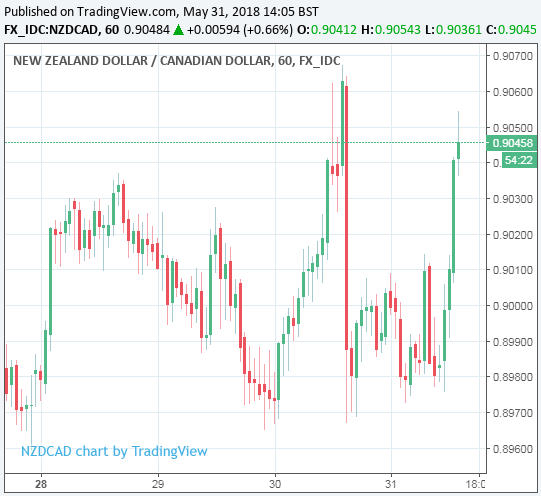 "The Canadian dollar strengthened sharply yesterday following the BoC’s latest policy meeting," says Derek Halpenny, European head of global markets research at MUFG. "The BoC has become more confident over the need to raise rates back towards a more neutral policy setting. It supports our view that the BoC is likely to raise rates two more times this year."

While Thursday's GDP data presented only a minimal threat to the Loonie this week, the same cannot be said for President Donald Trump and his increasingly confrontational approach to international trade.