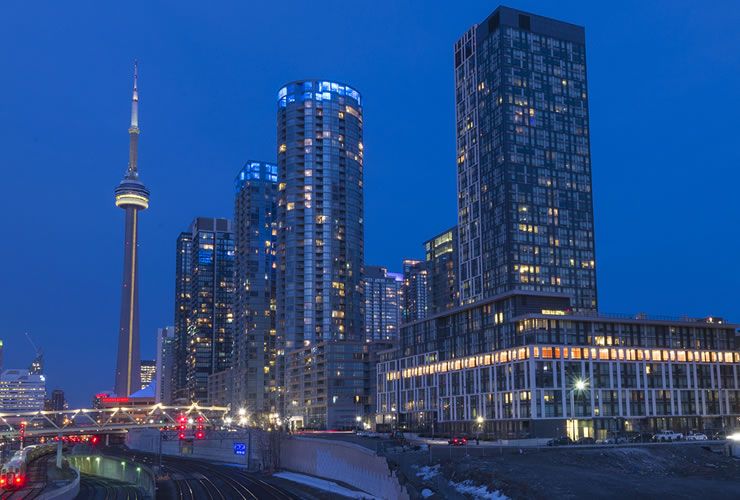 With the Bank of Canada now fading in importance for CAD, NAFTA negotiations are back in focus and look set to keep the currency on its toes.

The Canadian Dollar remained on the back foot Tuesday as the sixth round of North American Free Trade Agreement negotiations gets underway. Trade representatives are meeting for the fifth time in an attempt to break a deadlock between America, Canada and Mexico over five key demands made by President Trump’s administration.

....The Wall will be paid for, directly or indirectly, or through longer term reimbursement, by Mexico, which has a ridiculous $71 billion dollar trade surplus with the U.S. The $20 billion dollar Wall is “peanuts” compared to what Mexico makes from the U.S. NAFTA is a bad joke!

The frustrations of President Trump, who once described the NAFTA accord as “the worst trade deal ever” signed by the United States, have typically been directed at Mexico but this doesn’t mean the Canadian Dollar won’t get clobbered if the deal falls apart.

“Washington and Ottawa are experiencing one of their coldest winters in decades - a fitting backdrop to the frosty state of NAFTA renegotiations between the U.S., Canada and Mexico,” says Mathias Hartpence, a policy economist at RBC Capital Markets.

This week’s talks come closely on the heels of the latest Bank of Canada interest rate rise, which had been widely anticipated by the market.

Delivering the interest rate rise, Governor Poloz warned of risks to the Canadian economy stemming from the negotiations, while economic forecasts accompanying the announcement also suggested that future interest rate rises may be slower in the making than some traders had hoped.

This has since taken the wind out of the Canadian Dollar’s sails and left it vulnerable to the ebb and flow of headlines, and Presidential tweets, relating to NAFTA. 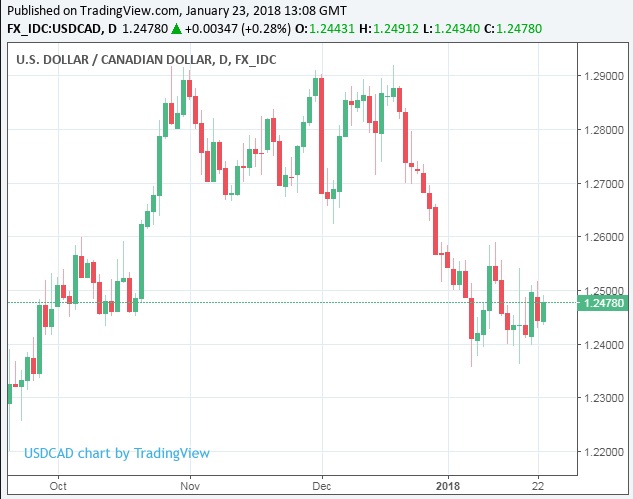 Both Canada and Mexico have been reluctant to accept Washington’s demands as they would reduce, if not completely erase, the merits of the deal to both countries.

Fears are that, after five rounds of negotiations yielding no progress at all, President Trump’s team might use the nuclear option.

This could see the invocation of Article 2205 which, being a declaration of intent to terminate the accord, would start a six month countdown to America’s withdrawal from NAFTA.

The Trump administration may even be incentivised to ramp up its protectionist rhetoric over the coming weeks and months, given the midterm elections are approaching in November.

“Indeed, the risks that Trump invokes Article 2205 as a negotiating tactic is high, and we believe that markets are not properly hedged for such an outcome,” says Mark McCormick, North American head of FX strategy at TD Securities. 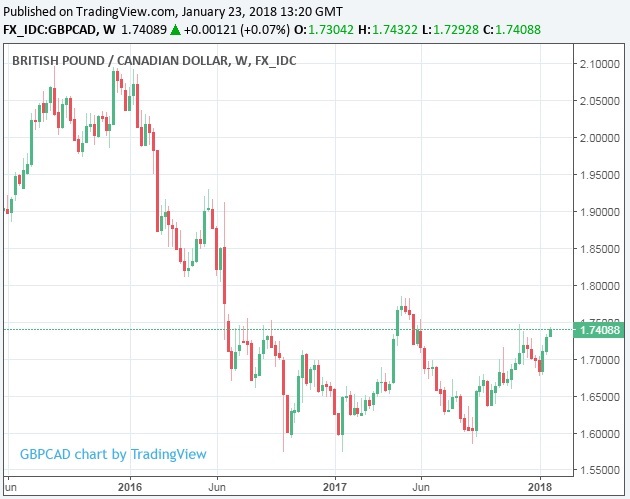 TD Securities strategists have previously warned that the Canadian Dollar could fall by as much as 20% if the NAFTA deal implodes and Canada and the US default to trading with each other on World Trade Organization terms.

They also say the Loonie could drop by 10% in response to a withdrawal notification alone. Although others are more sanguine on the risks surrounding the current talks.

“While our base case is that a break-up will be avoided, noise around NAFTA may act as limiting factor for CAD. But any actual fallout from negative NAFTA noise may be fairly muted,” says Viraj Patel, a strategist at ING Group.

Many expect the US and Canada to default back to the old CUSFTA trade agreement in the event that NAFTA is terminated, but an underestimated risk is that both countries are forced to return to dealing with each other on World Trade Organization terms. 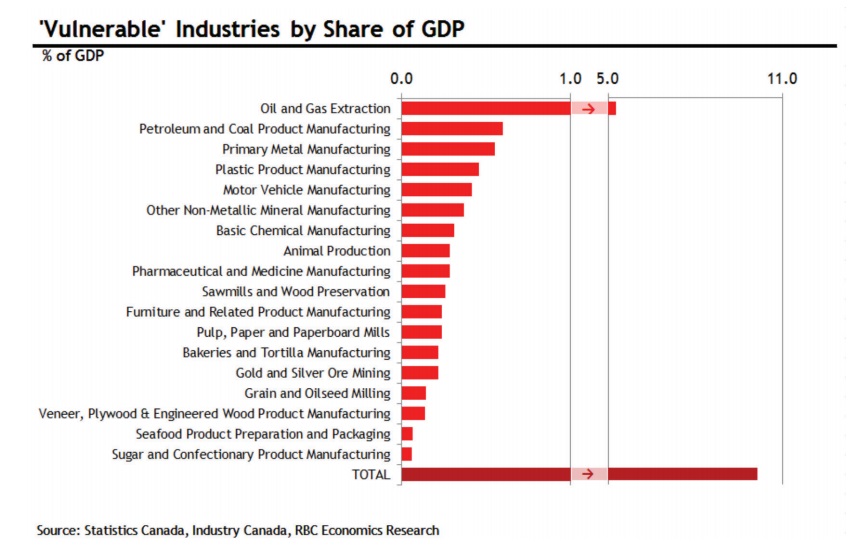 Above: RBC Capital Markets graph ranking Canadian industries by thier vulnerability to a NAFTA meltdown.

At the time of writing, and in the absence of an agreement over the coming days, haggling over the issues could effectively drag on until April when a deadline for the extension of the US Trade Promotion Authority falls.

The TPA is a piece of legislation giving the White House the ability renegotiate NAFTA and put a new accord before Congress for a vote. US lawmakers can either approve or reject the new deal. They cannot amend it.

The Issues: What it's all About

There are five sets of rules that are a problem for the Trump administration and changes around several of them could have major implications for the merits of the deal to Canada.

Top of the agenda are “rules of origin” around the manufacturing of cars and other motor equipment.

Washington wants changes that force car makers to produce more vehicle parts in America, instead of offshoring production facilities to Mexico and other locations where employment costs are much lower.

Proposed changes in the motor sphere might not have a large impact on Canada, according to RBC, because more than two thirds of parts used in Canadian car manufacturing already come from the US. They would, however, be bad for Mexico.

America’s state and federal government procurement market is worth around $1.7 trillion. A large part of it, covering areas like defence, is closed to foreign companies.

However, given the significant size of the overall market, even the smaller part that is open to foreign companies is substantial.

“The U.S. aims to keep these exclusions in place under a revamped NAFTA, while also seeking “reciprocity” with Canada and Mexico on a dollar-for-dollar basis,” says Hartpence.

Procurement markets in both Canada and Mexico are much smaller than in the US but, just like across the border, only a portion of those markets are open to American companies.

To Washington, current arrangements are an unfair deal so American negotiators are pushing for change. This could be a major stumbling block for Canada in the talks.

“It is highly unlikely that Canada would accept such a proposal,” Hartpence notes.

Another major stumbling block for the Canadian side is Washington’s attempt to remove the dispute resolution mechanism from the renegotiated pact.

The current system enables both Canadian and American companies to avoid being forced into fighting expensive legal battles in foreign courts by deferring to a panel of private trade representatives who rule on disputes themselves.

But US negotiators say it prevents US courts from enforcing American trade laws and trade defence measures.

“Heavily trade-intensive Canadian industries that largely export to the U.S. would be relatively more vulnerable without Chapter 19, as they would be challenged to quickly shift exports to alternative markets or absorb U.S. tariffs if they were targeted,” says Hartpence.

“This represents a large portion of Canada’s exports and includes industries such as automotive, oil and gas, and household appliances.”

Issue 4: A Life in Purgatory

A third highly contentious issue for both Canada and Mexico is Washington’s insistence that the renegotiated NAFTA deal be subjected to a review every five years.

The so called sunset clause would require lawmakers in all three countries to approve the continued existence of the pact every five years.

This could mean there is a perennial source of uncertainty around NAFTA trade relations that may end up undermining the merits of the pact altogether.

“Trade-intensive industries that are largely focused on North America, such as automotive, oil and gas, resins and rubbers, and plastics, and their upstream goods and services suppliers, would experience adjustment costs (or have to anticipate such potential costs) every half-decade,” says Hartpence.

Another explosive issue is the US government having taken aim at Canadian supply management practices in the dairy sector.

Supply of dairy goods in Canada is regulated by the government in order to support local dairy prices so the government can avoid having to pay subsidies to dairy farmers.

While the Canadian dairy sector accounts for less than 1% of GDP, there are more than 20,000 Canadians working in the industry.

However, Washington is arguing that the supply management system and Canadian border tariffs preserve an unequal playing field that puts American companies at a disadvantage.

In short, Washington wants rid of the Canadian supply management system, which Hartpence says is a politically sensitive issue for Canadians.

“It is not likely that Canada would dismantle the supply management system or eliminate dairy import tariffs,” the economist says.

“The more likely scenario would involve ceding some market share to the U.S. and Mexico, with compensation for Canadian dairy farmers, though the 3.25% dairy market share that Canada had conceded to the group of TPP countries may not satisfy Washington.”

The Canadian Dollar fell against the majority of its peers after employment figures disappointed against investor expectations.