Canada's economy lost around 31k jobs last month when consensus among economists had suggested that a 14.2k increase was likely, although the local unemployment rate surprised positively when holding at 4.9% while average hourly wage growth remained at 5.2% on an annualised basis.

"The Canadian employment figures were somewhat of a head-scratcher again in July, with employment falling for a second consecutive month but the unemployment rate remaining historically low," says Royce Mendes, an economist at CIBC Capital Markets.

"While today's figures muddy the waters further for policymakers, the Bank of Canada will likely focus on the historic low unemployment rate and still strong wage growth to justify another non-standard rate hike at its next meeting,"

Job losses were concentrated in the services industries and public sectors while also being limited to the provinces of Ontario and Prince Edward Island. 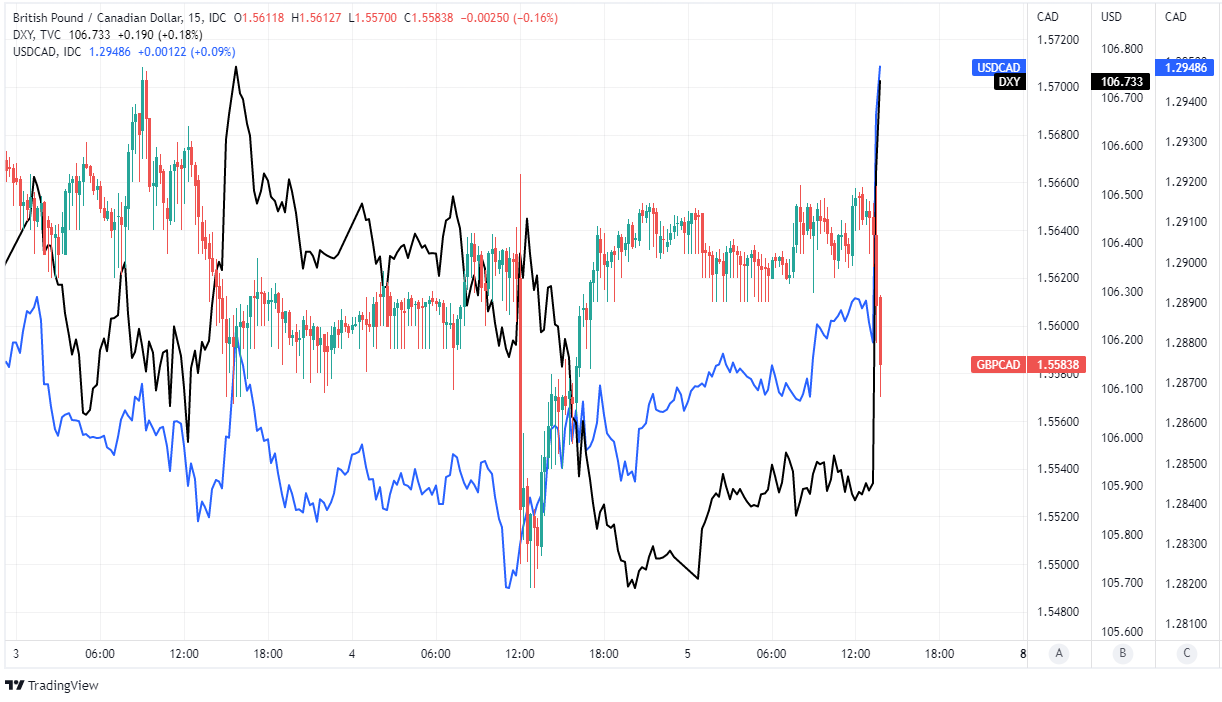 Above: Pound to Canadian Dollar rate shown at 15-minute intervals with U.S. Dollar Index and USD/CAD.

"Two consecutive months of lower employment indicates that the Canadian labour market is running up against capacity constraints, with little room for upside," says Carrie Freestone, an economist at RBC Capital Markets.

"Demand for workers is still very high with job postings still 65% above pre-pandemic levels (though the number of job postings continues to fall), and there are few unemployed Canadians available to fill these vacant positions," Freestone said on Friday.

It's possible the Loonie's performance on Friday reflects investors taking the view that Canada's labour market remained 'tight' even as it shed jobs and inferring from this that the Bank of Canada (BoC) is still likely to feel comfortable with its recently aggressive increases in interest rates.

But the Canadian Dollar may also have benefited on Friday from its close proximity to a U.S. job market that appeared to boom further in July.

"Between a much stronger US payrolls and a weak Canadian employment report, USDCAD rocketed higher. While we were stopped out earlier this week, only for it to give it all back by today, we have viewed the CAD as living on borrowed time," says Mazen Issa, a senior FX strategist at TD Securities. 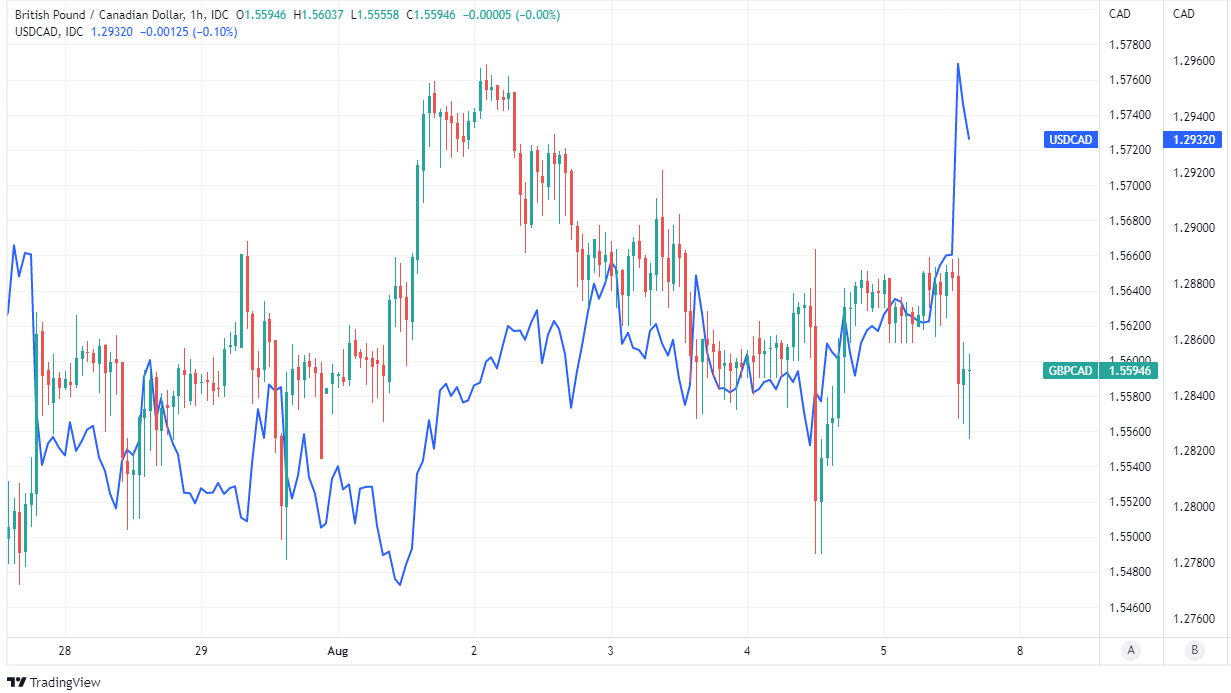 Above: Pound to Canadian Dollar rate shown at hourly intervals alongside USD/CAD.

"We think it is appropriate to leg into shorts into or around the next interest rate meeting as that may coincide with "peak BOC", just as the data really begins to reflect the impact of higher rates. Indeed, we are projecting a record rise in the household debt servicing ratio," Issa said after suggesting on Friday that institutional clients consider buying USD/CAD.

This was after July's non-farm payrolls report made a mockery of the recently popular idea that the U.S. economy may be close to recession.

"Indeed, employment boomed in July across industries. It has now even surpassed pre-pandemic levels. At the same time, the unemployment rate fell to its February 2020 low. As already signaled by the number of job openings, companies' demand for workers is still strong," says Dr. Christoph Balz, a senior economist at Commerzbank.

"The cooling hoped for by the Fed to lower inflationary pressure has failed to materialize. As a result, calls for another 75 basis points rate hike are likely to grow louder in the FOMC," Balz and colleagues said on Friday.

GBP/CAD had stabilised following a steep multi-month decline as the market second guessed the outlook for the U.S. economy and Dollar over recent weeks so it could be at risk if Friday's data or its possible implications for Federal Reserve (Fed) interest rate policy leads to a fresh turn higher by the greenback.

The Pound to Canadian Dollar rate may be especially susceptible to any pick up in market appetite for North American currencies after the Bank of England (BoE) announced its largest interest rate rise since 1995 on Thursday but warned of an imminent recession that it expects to last for more than a year. 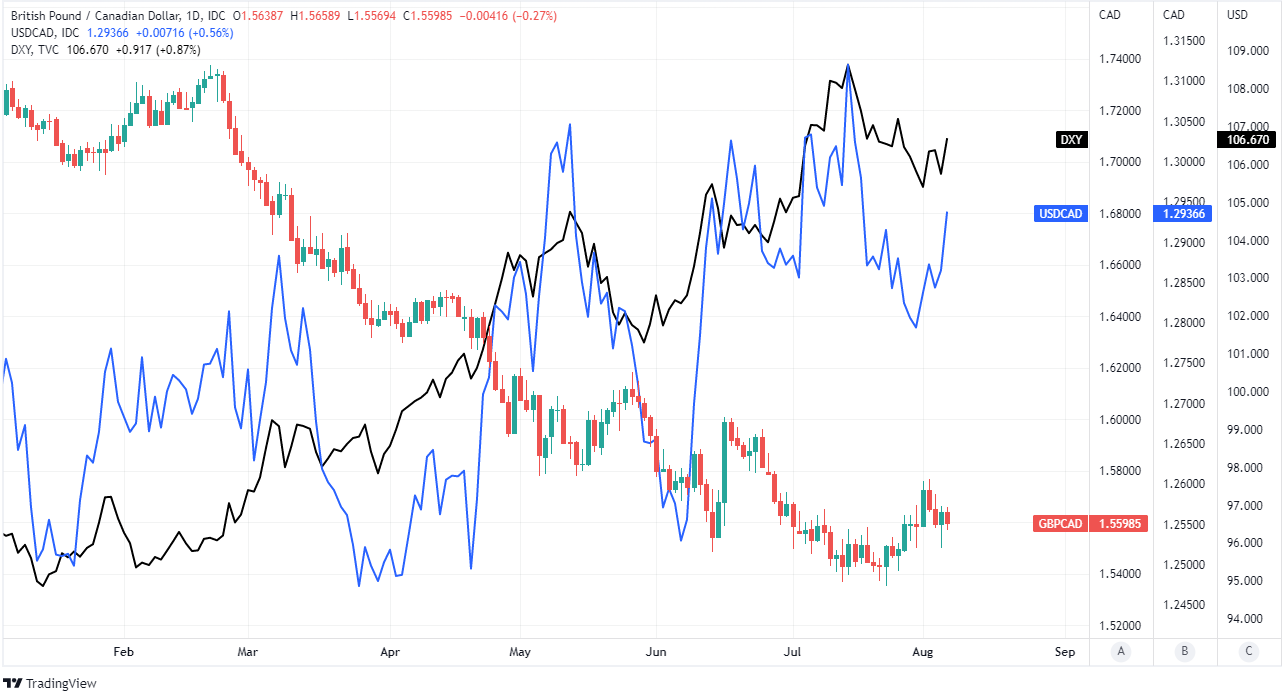 Above: Pound to Canadian Dollar rate shown at daily intervals alongside U.S. Dollar Index and USD/CAD.