The U.S. economy added 528K jobs in July, a number that more than doubled the 250K jobs the market was expecting and aided a rebound in the U.S. Dollar.

The Dollar rose against the Pound, Euro and other major currencies after the U.S. Bureau of Labor Statistics said the boost in jobs pushed the country's unemployment rate down to 3.5% from 3.6%.

The strong numbers will justify the claim by U.S. officials that the economy is not in a recession, despite having printed two negative quarters of growth in the first and second quarters.

"We have a very strong labor market. When you are creating almost 400,000 jobs a month, that is not a recession," said Treasury Secretary Janet Yellen in a recent media appearance.

The jobs data will shore up expectations for the Federal Reserve to continue its policy of pursuing aggressive interest rate hikes, which is in turn supportive of the Dollar.

The Pound to Dollar exchange rate (GBP/USD) fell 0.80% in the minutes following the jobs data, going to 1.2054, pushing the rate offered on bank accounts for dollar payments to 1.18 and the rate offered by payment specialists to 1.20.

"The world’s largest economy has trounced expectations on the jobs front. This will only embolden a Fed that is looking for reasons to keep tightening at pace and Dollar strength surged accordingly," says James Bentley, Director of Financial Markets Online.

"Companies' demand for workers is still strong. The market is very tight in this respect, which is also due to the fact that the number of people available to the labor market fell again in July," says Christoph Balz, Senior Economist at Commerzbank.

Balz notes Fed Chairman Powell told journalists following the July rate hike he would be watching the two employment reports due before the September meeting.

"These would help determine whether the Fed would have to continue to apply the brakes forcefully. The first of these two data points has now been published – and shows that the labor market continues to run hot," says Balz. "Calls for another 75 basis points rate hike are likely to grow louder in the FOMC." 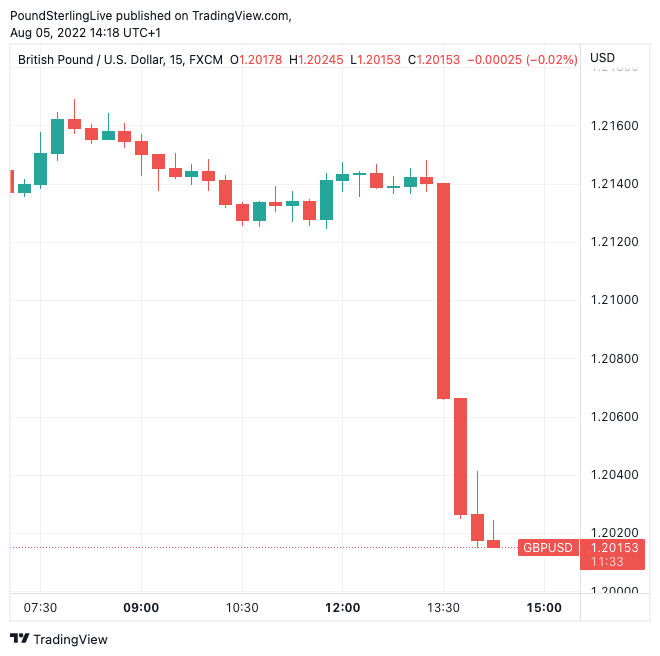 Above: GBP/USD at 15-minute intervals, showing reaction to the jobs report.

But Richard Flynn, Managing Director at Charles Schwab UK, says U.S. employment data appears to be strong, but digging a little deeper reveals a mixed picture of the jobs market.

"Whilst unemployment remains very low, the cause may be low labour force participation rather than a booming economy. Investors will be mindful that the unemployment rate is a lagging indicator that has always been low at the onset of a recession. Indeed, broader economic indicators have been weakening recently," he says.

If the market comes around to this view the Dollar's appreciation potential could be capped.

However, the same report showed wages grew by 0.5% month-on-month in July and the annual growth rate was 5.2%.

"The wage growth is higher than what would be consistent with 2% inflation, and a strong argument for more rate hikes ahead," says economist Knut A. Magnussen at DNB Markets.

"We believe that the Fed is far from done with hiking while global growth momentum is clearly deteriorating. Therefore, we update our forecasts to increase our USD bullishness," says Paul Mackel, Global Head of FX Research at HSBC.

"We are emboldened in believing the USD has more upside," said Mackel at the time. Today's jobs data will have offered some justification for this stance.