_GBP holds custer of supports near 1.70  but is vulnerable.
_Needs stronger USD/CAD to avert dip below 1.70, risk of 1.65.
_U.S.,China, Australia tensions, USD and oil all key for the CAD.
_As BoE, Brexit and global factors dicate dire outlook for GBP.

Pound Sterling was bid Thursday after IHS Markit PMI surveys rose faster than was expected, indicating the beginnings of an economic recovery might not be far off while helping the Pound-to-Canadian Dollar rate extend its time spent resting on a cluster of nearby technical supports.

The 200-day moving average typically provides support to many asset prices and that was located at 1.7009 for the Pound-to-Canadian Dollar rate on Thursday, while the round number just below has provided support many times already in the last six months. Meanwhile, down at 1.6984 is the 200-week moving-average and at 1.6967 is the 50% Fibonacci retracement of the July 2019 uptrend that rejected a first test on Wednesday.

Sterling was trailing behind only the U.S. Dollar Thursday, which rose as stocks and some commodities softened amid fresh tensions between Washington and Beijing and what some described as profit-taking ahead of a holiday weekend for some jurisdictions. But the outlook is darkening so support for the Pound-to-Canadian Dollar rate could ebb without increased weakness in the Loonie.

If GBP/CAD breaks those supports between 1.6970-to-1.7009 it might become liable for a trip to 1.68 and potentially the bottom of its 2020 range near 1.65 in the weeks ahead, more so if the dire outlook for Sterling crystallises in June but oil prices remain resilient and constrain the upside in USD/CAD. GBP/CAD can be thought of as an amalgamation of GBP/USD and USD/CAD. 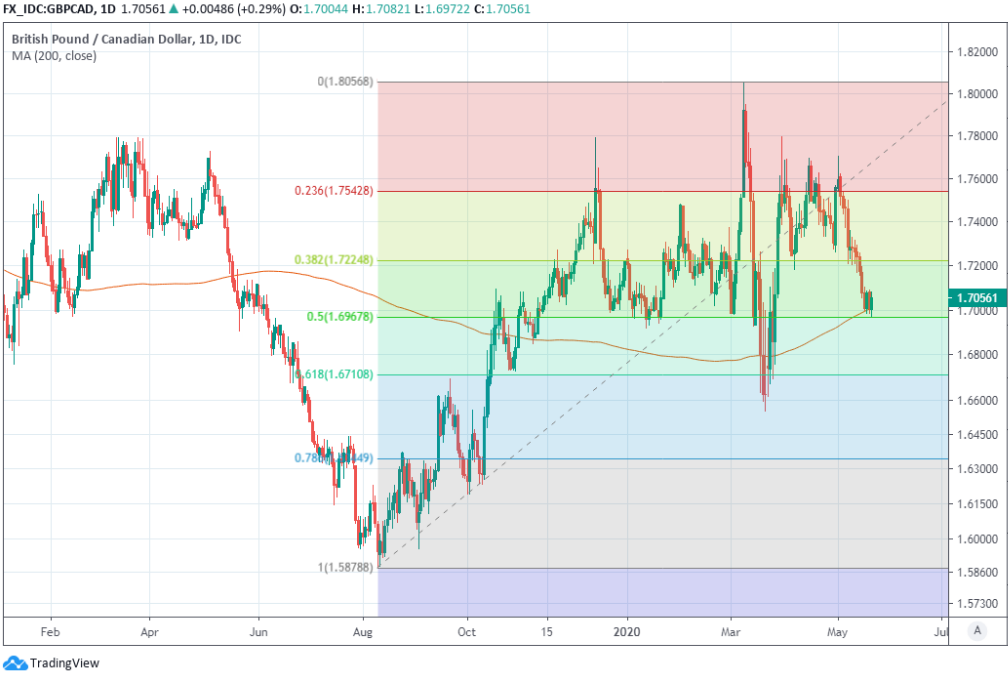 Above: Pound-to-Canadian Dollar rate at daily intervals with Fibonacci retracements of March-to-May rebound.

"USD gyrated in the overnight session today as traders digested negative US/China and Aussie/China developments against generally more positive May flash PMI news out of Europe," says Eric Bregar, head of FX strategy at Exchange Bank of Canada. "We felt it was the report out of Australia’s Financial Review (about China potentially going after Australian iron ore/coal exports) that really derailed broad risk sentiment in Asia and drove the USD higher."

Much has been made of the nascent war of words between President Donald Trump and China, given how the White House incumbent will be weighed and measured at the ballot box in November as the world's highest number of coronavirus infections and deaths looms in the background.

Less has been made of the ongoing aggression directed by Beijing at Australia, a country that China has deep economic ties with.

China has attacked Australia while attempting to claim the moral high ground over the way it itself has been treated by the U.S. at the hands of the White House. Mirroring how it lashed out at President Trump for effectively closing U.S. borders to travellers from it in early February even as China itself constructed and enforced borders of various kinds on its own territory to keep citizens apart from those in the most coronavirus affected areas. It's also preached about the need for the White House to honour the bilateral agreements that it strikes, especially January's 'phase one' deal, while riding roughshod over those struck between itself and third countries. 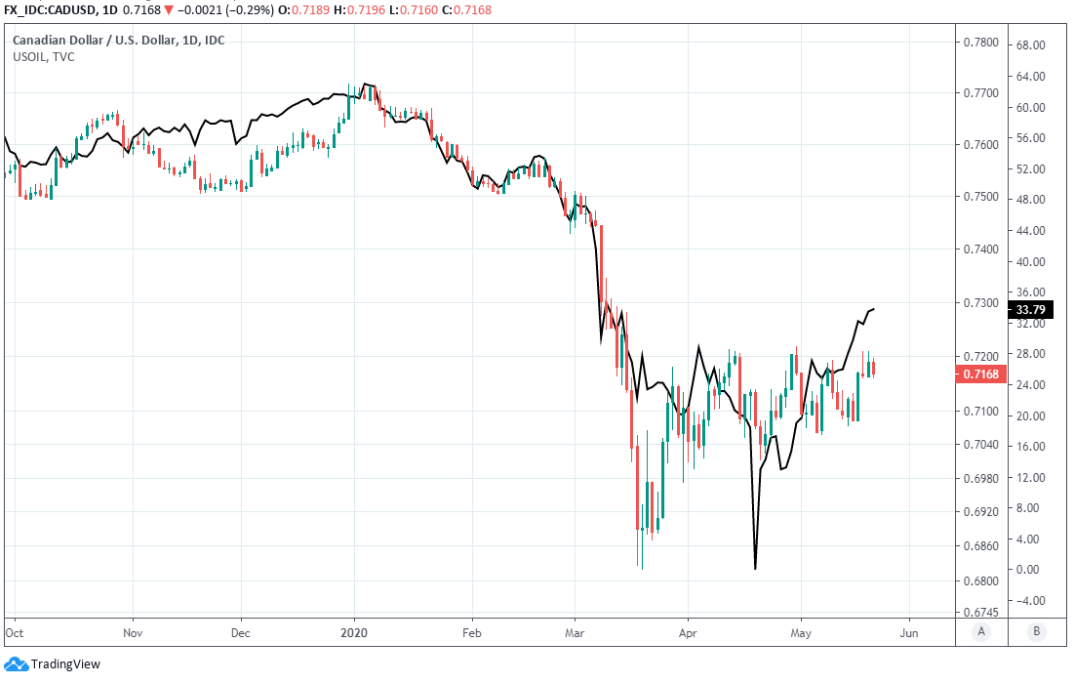 Australian Prime Minister Scott Morrison began calls for an inquiry into the coronavirus' initial origins and everybody's overall handling of the outbreak, before winning the backing of 62 nations at the World Health Assembly this week. In an exceptionalist display of exceptionalism, Beijing used the same Trumpian acts of economic gangsterism it often rails against in order to stifle and punish the inquiry. In the process, it sought to evade if and wherever due, the accountability that's a fundamental prerequisite for good governance of all institutions but certainly the leadership position it covets on the 'world stage'.

Put differently, and unlike with U.S.-China tensions, Beijing's treatment of Australia and sudden accelerated encroachment into Hong-Kong affairs suggest that it could have something to hide or distract from.

This might not bode well for relations between many of the world's largest economies, and its second largest. Nor the global economic recovery and risk currencies like Sterling and the Loonie, although developments at the BoE and in the oil market may be most pivotal for GBP/CAD in the weeks ahead.

"Several USD/DM pairs are at, or close to, important technical levels that if broken, could cascade into a meaningful move lower in the USD. EUR/USD and USD/CAD are two pairs that come to mind," says Bipan Rai, North American head of FX strategy at CIBC Capital Markets. "USD/CAD remains close to the bottom end of our expected near-term range (1.38-1.43). The march higher in prompt crude prices have helped along with the broad risk rally. Nonetheless, we still expect support to hold." 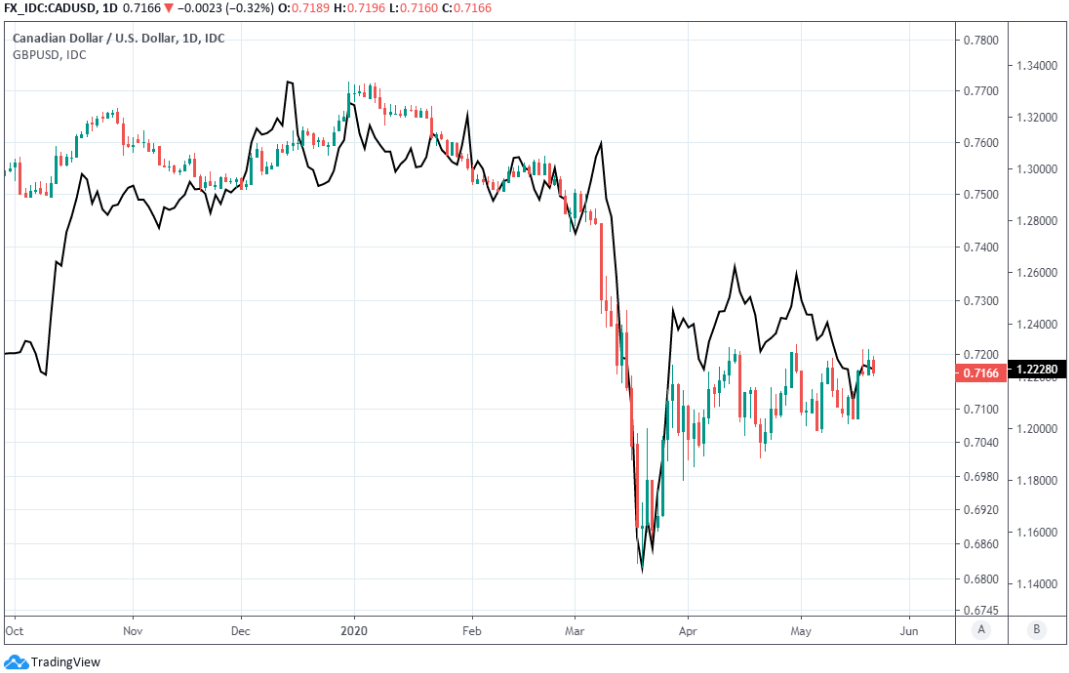 The BoE needs a weaker currency which might explain why Governor Andrew Bailey told the Treasury Select Committee this week that he's changed his views on negative rates and now considers them part of the bank's toolbox, which wounded Sterling. Reiterating or expanding on those comments in the June 18 policy decision would compound the Sterling weakness that results from any anticipated increase in the size of the bank's quantitative easing programme.

However, another rub for the Pound-to-Canadian Dollar rate is that Bank of Canada (BoC) Deputy Governor Timothy Lane indicated late Wednesday that he and his colleagues might not view additional rate cuts as a viable option. He told the CFA Society Winnipeg and Manitoba Association for Business Economics the bank's cash rate has reached its "effective lower bound" after being cut to 0.25% in March. The BoE cash rate is 0.10% already and Governor Bailey is suggesting it could go negative.

"The Bank is looking more urgently at negative interest rates, increasing the chances for the Committee to proceed with such an action in the months to come," says Charalambos Pissouros, an analyst at JFD Group, before Thursday's gains by the U.S. Dollar. "The prospect of further easing by the BoE, combined with the risk of a no-deal Brexit by the end of the year, may keep the currency under selling interest for a while more. Conditional upon further recovery in risk appetite, we would prefer to exploit any pound losses against currencies that tend to benefit during periods of market optimism."

Canada's Dollar is as sensitive if-not more so than Sterling to changes in investors' appetites for risk but is better able to exploit positive developments in the oil market. The Loonie got no help from resilient oil prices on Thursday but the steady recovery in North American and global benchmarks has weighed on USD/CAD this week while lifting CAD/USD. 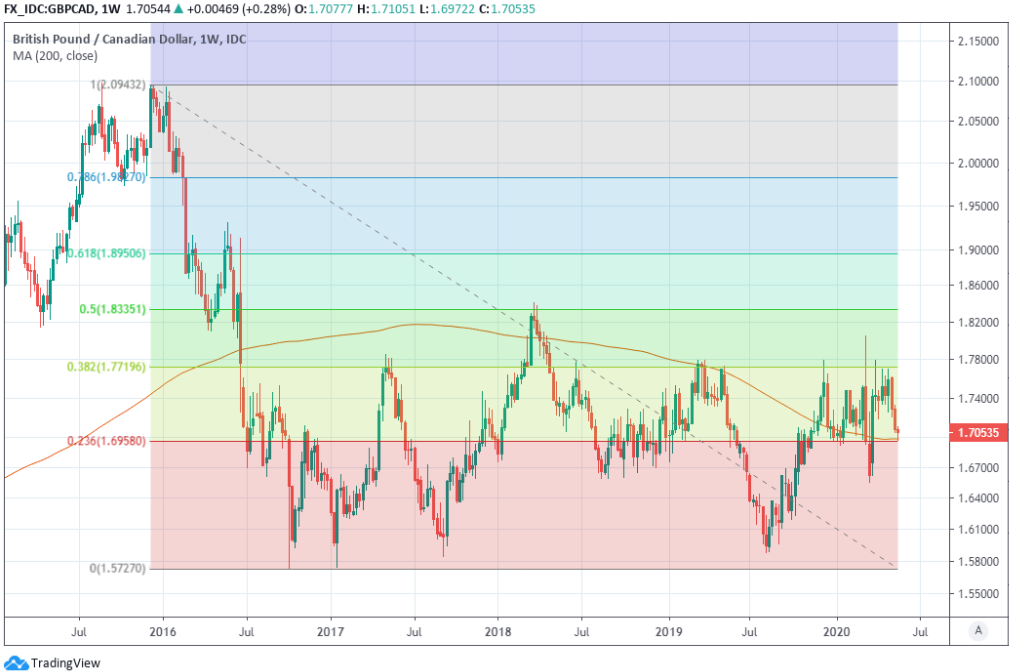 The USD/CAD rate would need to rise back to the top of its rough 1.38-1.42 range in order to prevent the Pound-to-Canadian Dollar rate declining to around 1.68 in the event that GBP/USD falls to 1.20, in line with a growing number of analyst forecasts, over the coming days and weeks. Meanwhile, a subsequent GBP/USD fall to around 1.18 would put GBP/CAD near 1.65 and at the bottom of its 2020 range if USD/CAD remains near Thursday's 1.3950 level.

That wouldn't necessarily be the end of Sterling's road lower either, although such rates would only available be at interbank level with those quoted to retail and SME participants likely much lower. Specialist payments firms can help squash the spread between interbank and retail rates.

"There has been speculation that the UK could push short-term interest rates into negative territory, at a time when policymakers elsewhere have been resistant to the idea of further rate cuts. Since the end of April, investors have discounted a further 10bp cut in the policy rate in the UK, to 0.0%. They have not reduced their expectations for policy rates in other major economies by as much. Accordingly, rate expectations have weighed more on the pound than on other major currencies," says Oliver Allen at Capital Economics, who says the Pound should recover to 1.25 against the Dollar by year-end. "While we think that the Bank of England will expand QE significantly, which would be bad for the pound, we do not expect it to cut its policy rate from its current level of 0.1%. Meanwhile, we think that it is more likely than not that the UK government ultimately agrees to extend the transition period, or at least agrees some sort of a fudge with the EU that prevents major disruption to trade at year-end."