The Pound-to-Canadian Dollar rate has found support on the charts amid a tentative recovery of risk appetite but significant risks still lurk on the path ahead and could push Sterling back to its March lows in the days and weeks ahead.

Sterling has found support on its 200-day moving-average at 1.6999 and near to the 50% Fibonacci retracement of its August uptrend around 1.6973 after ceding ground to the Loonie earlier in the new week when investors celebrated reports of Moderna's progress developing a coronavirus vaccine, which lifted oil prices and benefited the Canadian currency more than the Pound.

The Pound-to-Canadian Dollar rate was attempting to lift-off 1.70 Wednesday as investors rewarded a government decision to reduce most-favoured-nation tariff rates for goods coming from countries that don't have a preferential trade agreement with the UK as well as better-than-expected jobs figures, but Sterling's stabilisation has been driven by whimsical sentiments that might mean it's likely to come undone in the days ahead. 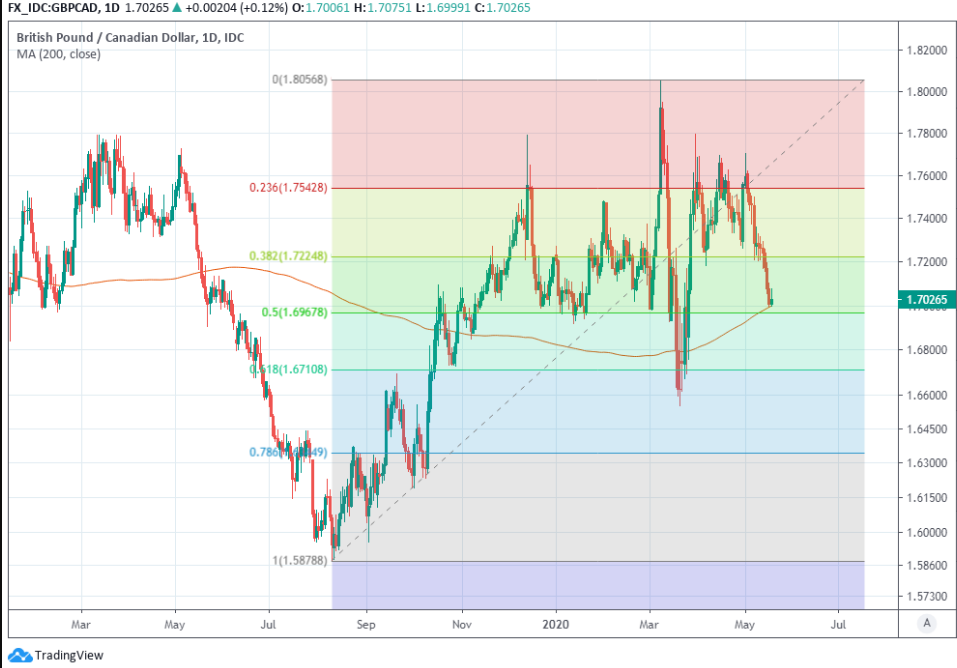 A coronavirus vaccine would take months if-not years to roll out globally and so may come too late to radically alter the pace of recovery from the coronavirus trough, given that Europe, North America and the antipodes are all already taking slow and steady steps out of 'lockdown'. And any economic boost afforded to the UK from lower external tariffs risks being offset by the imposition of tariffs on imports from the EU, which could be becoming more likely.

There aren't many analysts out there arguing that Sterling's rally is likely to continue beyond the very short-term, and for a great many reasons too. Bank of England (BoE) chief economist Andy Haldane revived negative interest rates as a policy option at the weekend, The Telegraph reported, just at markets are sat waiting for it to announce another increase in size of the government's quantitative easing programme that would weigh heavier on already-negative bond yields and risk wounding the Pound.

"Despite the raft of risks weighing on sterling recently, this morning’s UK labour market data was not as dire as expected and the British Pound is on the march higher," says George Vessey, a currency strategist at Western Union Business Solutions. "The sterling rally should be taken with a pinch of salt though as the period of the unemployment data only covers one week of lockdown at the end of March. The unemployment rate is expected to have rocketed in April and May...Market participants seem to be ignoring the surge in the claimant count too - a measure of the number of people claiming unemployment benefits." 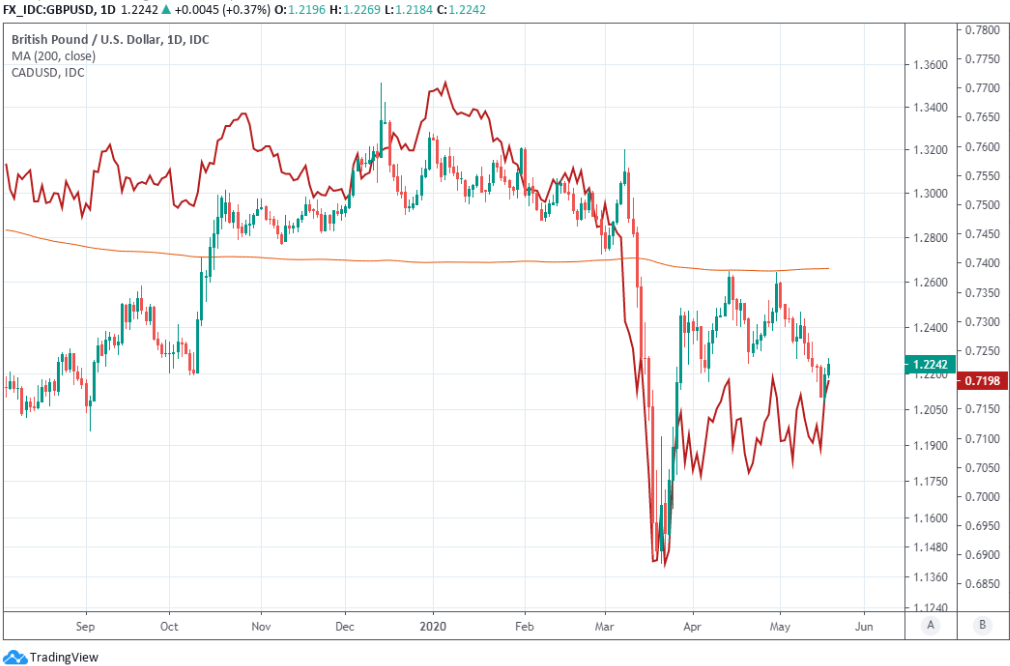 A June quantitative easing increase is just one in a litany of risks that will have an opportunity to conspire with each other and place Sterling on the back foot in the coming weeks, when the UK government will face pressure to catch up with European countries relaxing 'lockdown' restrictions just as the June 01 round of Brexit talks get underway. The July 01 deadline for requesting an extension of the Brexit transition period will also be drawing closer.

Only "limited progress" has been achieved so far and there's just one more round to go before Prime Minister Boris Johnson will choose between requesting an extension and abandoning talks in favour of renewed preparations for a 'no deal' Brexit after year-end. But with Johnson under fire for his handling of the coronavirus, domestic political reasons could mean an extension is now less palatable as a policy option. Meanwhile, Canada's currency is drawing support from steadying oil prices.

"As oil volatility decreases, the correlation should pick up again, and as we expect a sustained recovery in oil prices in the second half of the year, we also see USD/CAD entering a sustained downward trend in that same period," says Francesco Pesole, a strategist at ING. "We expect most CAD gains to be concentrated in 3Q and extend into 4Q, where we see USD/CAD at 1.31."

Sterling's own unique headwinds and a robust rebound in the oil market threaten to make the Pound-to-Canadian Dollar rate the Sterling-small-Dollar-bloc cross rate with the most downside potential, given that it could constrain the upside in USD/CAD as GBP/USD threatens to plumb new multi-decade lows. 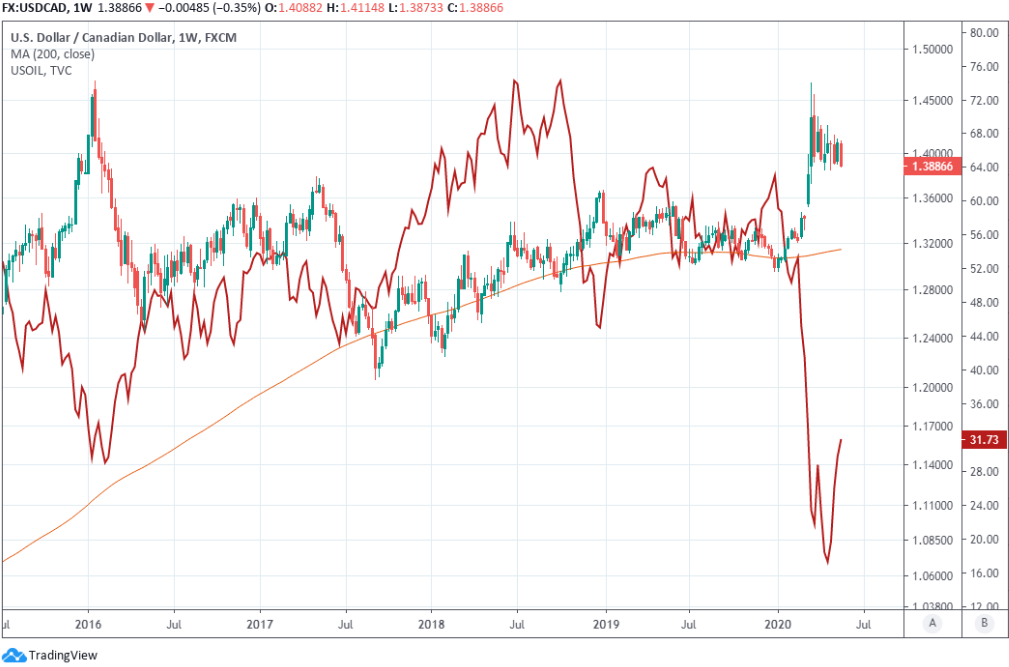 ING's Pesole says the Canadian Dollar can push the USD/CAD rate down from 1.39 Tuesday to 1.31 by year-end, but that it should remain close to 1.40 through the end of June due to lingering uncertainty about the shape and timing of the global economic recovery out of the coronavirus trough.

The rub for Sterling however, is that even at 1.40 the Pound-to-Canadian Dollar rate would still be set to fall below 1.70 over the coming days and weeks if the outlook for GBP/USD is anything to go by. The Pound-Canadian Dollar rate is an amalgamation of those two aforementioned exchange rates and will fall further if USD/CAD upside fails to match the downside in GBP/USD.

The Pound-to-Canadian Dollar rate would be found trading at 1.6842 if the USD/CAD rate returned to 1.40 while the GBP/USD rate fell back toward technical support at 1.2030, although the exchange rate would fall to 1.6722 if the upbeat mood among oil traders kept the USD/CAD rate around 1.39. Furthermore, if GBP/USD fell in line with a number analyst forecasts to 1.18 in the weeks ahead, while USD/CAD sat at 1.40, it would push the Pound-to-Canadian Dollar rate down to 1.65.

That wouldn't necessarily be the end of Sterling's road lower either, although such rates would only available be at interbank level with those quoted to retail and SME participants likely much lower. Specialist payments firms can help squash the spread between interbank and retail rates. 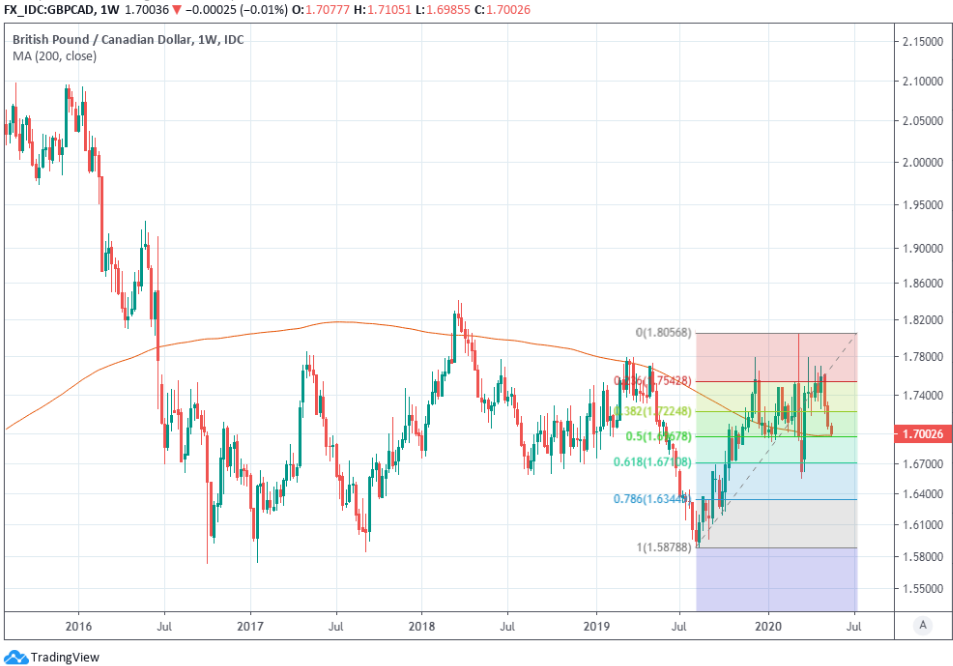