- Morgan Stanley recommend buying the Pound against the Aussie Dollar

- Reserve Bank of Australia policy to weigh on AUD.

Sterling is in “a strong position to rally” and the Australian Dollar outlook is dim, according to strategists at Morgan Stanley who have confirmed a recommendation to bet on GBP/AUD upside.

Multiple factors are conspiring to present a more positive outlook for the British currency, notably around Brexit and domestic interest rates, while softening economic data has dulled traders' views on the Aussie.

"The UK is targeting to secure a transition deal agreement at the March 22 EU summit, suggesting that headlines may become more constructive," says Hans Redeker, head of FX strategy at Morgan Stanley.

Thursday’s European Council summit is widely expected to result in a transition deal being formally agreed between Britain and EU, which will ensure the status quo remains in place for a further two years after the UK’s scheduled departure from the block in March 2019.

Indeed, negotiators struck an optimistic tone at a press conference Monday where they presented a draft agreement covering citizens rights, the financial settlement and Northern Irish border, alongside a handful of pledges relating to the future relationship.

Business bodies welcomed the development saying the agreement provides businesses with the certainty required to invest now that a so-called "cliff edge" or "hard Brexit" will likely be avoided.

Although Monday's deal still needs to be signed off at the European Council summit, and there are still some gaps to be filled, the mere prospect of it reaching the finish line has already given a substantial boost to Sterling. 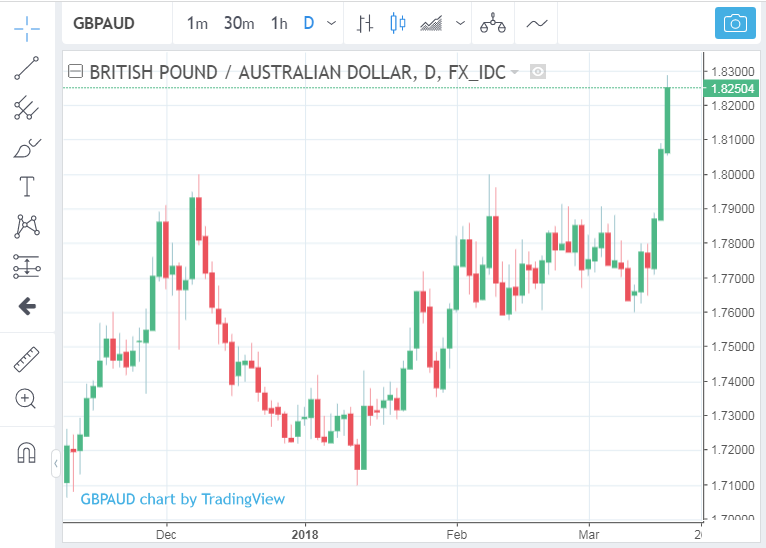 The Pound was quoted 1.32% higher at 1.8280 against the Australian Dollar around noon Monday, shortly after the press conference concluded, leaving the pair at its highest level since the Brexit vote of June 2016.

Sterling was also marked higher against all other G10 currencies, with its most noteworthy gains coming over the Aussie and the safe haven Japanese Yen.

"With our economists expecting a BoE rate hike in May, the BoE meeting this week may result in a hawkish tone," Redeker adds.

Bank of England rate setters are due to announce their latest monetary policy decision Thursday 22, March and markets will be watching closely for clues as to when it might raise rates again.

A cliff-edge is something the BoE has previously flagged as a risk to the economy and its own outlook for monetary policy so there are grounds to think it could strike a more optimistic tone Thursday.

As things stand, the BoE already warned in February that it will raise interest rates faster than markets had been expecting if the inflation outlook evolves in line with its latest set of forecasts.

It predicts the consumer price index will remain above the 2% target until at least the end of the first quarter 2021, suggesting the Bank will not meet its inflation target any time soon without further interest rate rises.

Meanwhile, on Monday morning, interest rate derivatives markets assigned only a 60% probability to the prospect of a rate hike in May. Any increase in this implied probability can be expected to boost the Pound.

All of this is important for the Pound-to-Australian-Dollar rate because it shows the relative interest rate equation moving further in favour of Sterling. 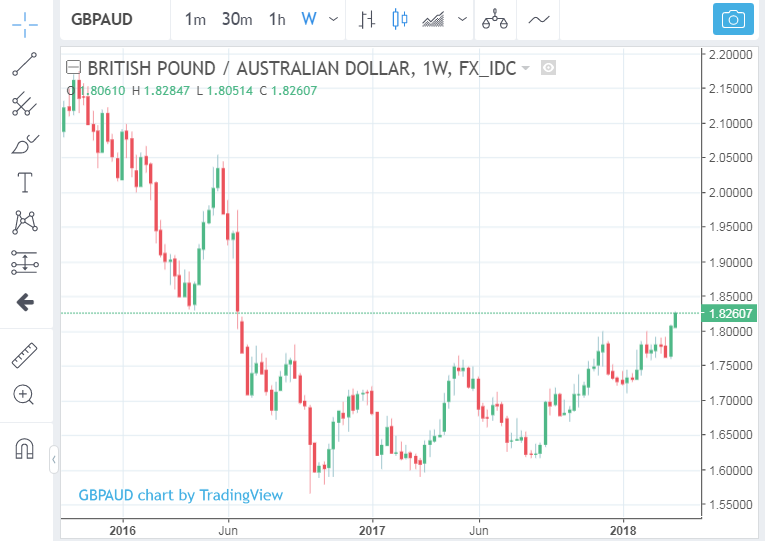 Australian GDP growth came in lower than was expected for the fourth quarter while growth was just 2.4% for the year overall, down from 2.9% in 2016.

Meanwhile, the Reserve Bank of Australia recently appeared to have become less confident in its forecasts for growth in 2018 and 2019 too.

It said around the same time the GDP number was released that it expects the economy to "grow faster in 2018 than it did in 2017". This marks a departure from the RBA's earlier, and more explicit, forecasts of 3.25% GDP growth in 2018.

In addition, Australian inflation remained subdued and, it turns out, fourth quarter wage growth was driven substantially by a less-important and unsustainable increase in public sector pay, not private sector pay.

All told, Australian interest rate outlook has dimmed in the New Year. Indeed, the Governor Philip Lowe said in a March speech "the Board does not see a strong case for a near-term adjustment of monetary policy." The RBA has left its own cash rate unchanged at a record low of 1.5% for 20 months.

Current pricing in interest rate derivatives markets, which enable investors to protect themselves against changes in rates and provide insight into expectations for monetary policy, suggests investors believe the cash rate will remain at 1.5% well into 2019.

There is only a 60% implied probability of an Australian rate hike before April 2019. Meanwhile, those same interest rate markets assign an 84% probability to the idea the Bank of England will have raised interest rates twice by then.

Redeker and the Morgan Stanley FX team recommended to clients last week that they bet on a further rise in the Pound-to-Aussie rate, entering a "long" trade at around 1.7760 and targeting a move up to 1.87. They suggested a stop-loss at 1.7570.