The January 26 to March 01 sell off has pushed the AUD/USD rate some 5% below its 2018 peak and technical strategists are increasingly flagging the downtrend as running out of steam.

The Australian Dollar rose during early trading in London Wednesday, recovering from an overnight slump, even after fourth quarter GDP growth disappointed the market and Reserve Bank of Australia governor Philip Lowe warned that an interest rate rise remains “some way off”.

Australian GDP growth came in at 0.4% for the fourth quarter of 2017, down from an upwardly revised 0.7% in the third quarter, which is beneath the 0.5% growth expected by economists and markets.

This makes for annual GDP growth of 2.4%, down from the 2.9% seen in 2016, with the disappointment owing largely to weakness in business investment and net exports. Australian imports rose by 1.6% in the fourth quarter while exports dropped 1.7%.

Weaker business investment follows several quarters of solid growth and, as far as one can tell from RBA governor Philip Lowe’s Wednesday speech, is likely a temporary phenomenon.

“Our assessment is that the economy is moving in the right direction. We expect stronger growth in 2018 than in 2017 and a further reduction in the unemployment rate. We also expect inflation to increase a little from its current low rate. These developments should help support the climate for business investment,” Lowe told an audience at the Australian Finance Review Business Summit Wednesday.

“Having said that, the expected progress in reducing unemployment and having inflation return to target is likely to be only gradual. With only gradual progress expected, the Board does not see a strong case for a near-term adjustment of monetary policy.”

Much of the fourth quarter growth that Australia did see was the result of continued strength in household income and spending, which will be welcome news for the RBA given its well telegraphed concerns over low levels of wage growth and household finances.

Nonetheless, the governor’s assessment of benign inflation conditions and explicit guidance to markets that it could be some time before interest rates move higher does little to improve the Australian Dollar outlook outside of the very short term.

However, for now, the January 26 to March 01 sell off in the Aussie Dollar has pushed the AUD/USD some 5% below its 2018 peak and technical strategists are increasingly flagging that the downtrend is now running out of steam.

“AUD/USD’s rally has alleviated immediate downside pressure and further upside probes towards last weeks high at .7892 remain possible. The market needs to clear this resistance to reassert upside pressure to the .7988 middle of February high,” says Karen Jones, a technical analyst at Commerzbank, in a note Wednesday. 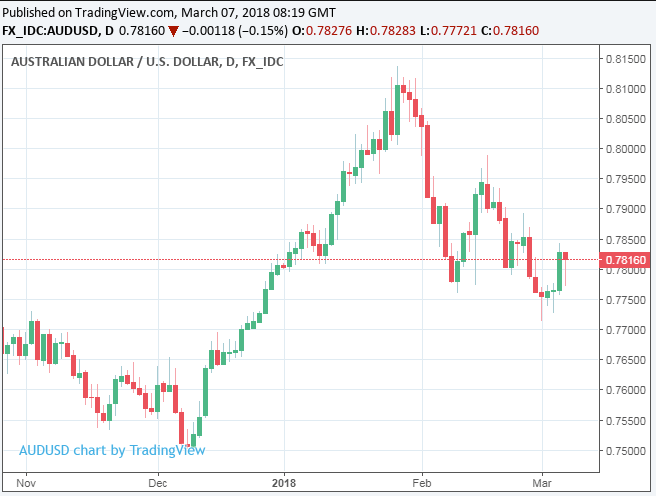 AUD/USD was quoted 0.37% higher at 0.7815 during early trading in London Wednesday after having dipped in overnight trading.

This was on a morning when the US Dollar index was trading higher, Australian economic data had been dire and prices of commodities such as iron ore were headed lower.

All of the above price action comes despite markets receiving a boost from signs of a possible detente between North and South Korea as well as the United States and North Korea. This leaves few explanations for the Aussie’s rise other than technical factors.

The Australian Dollar’s gains were broadbased on the morning, encompassing a majority of the G10 basket, with the unit making the most headway against Pound Sterling. The Pound-to-Aussie rate was quoted 0.53% lower at 1.7754 on the morning. 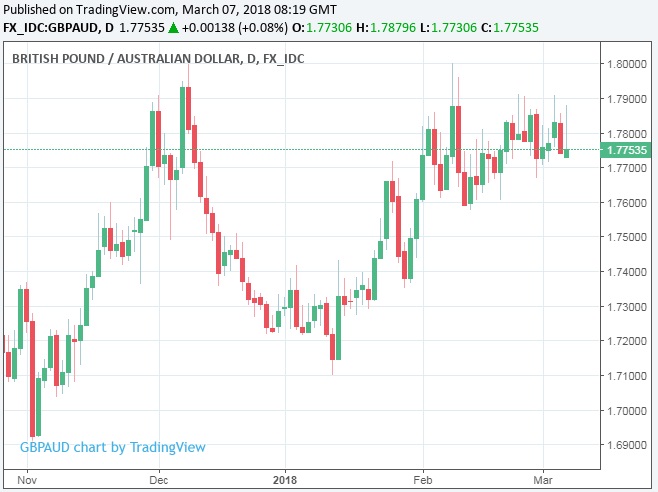 Notably, the RBA projected faster Australian economic growth in 2018 and observed that the all-important rate of wage growth “appears to have troughed”, both being taken as clear positives by the market.

However, some say the RBA’s statement on Australian economic growth actually represents a downgrade of its earlier forecasts if anything, given the RBA previously predicted 2018 GDP growth of 3.25% while 2017 GDP growth came in at just 2.4%.

“The Reserve Bank appears to be less confident about the growth outlook. Nevertheless, we still believe that it expects to be raising interest rates beginning sometime in late 2018 and into 2019. That would be in line with current market pricing.,” says Bill Evans, chief economist at Westpac.

“In contrast, Westpac is not surprised to see the Bank more cautious on the growth outlook and we continue to expect that the cash rate will remain on hold in 2018 and 2019.”

It goes almost without saying that the RBA still left its cash rate unchanged at a record low of 1.5% in March, for the 20th month in a row.

There aren’t any economists who have taken optimism about a wage growth “trough” as a sign of a pending change in the monetary policy stance of the central bank either.

“We remain comfortable with our long-held view that the RBA will take its time in starting a rate-hike cycle. Financial markets appear to be coming round to this view too,” says Besa Deda, chief economist at St George Bank.

“The overnight-indexed swap market is attaching a probability of 63% that the RBA will hike by the end of this year. This is a marked shift down when compared with three months ago.”

The Road to Nowhere

Current pricing in interest rate derivatives markets, which enable investors to protect themselves against changes in interest rates while also providing insight into investor expectations for monetary policy, suggests the RBA will not raise the Australian cash rate until well into 2019.

This contrasts with US interest rate markets where there is a 150% implied probability of another rate hike this month, in March.

It is a change in these probabilities that would elicit a reaction from currency markets although, in order for investors to feel more confident about betting on a change in Australian monetary policy, inflation and wage pressures will need to pick up first.

Like in many other countries, Australian inflation has been held back by subpar wage growth, which is weighing on consumer spending amid high levels of household debt.

The latest example of weak pay growth came in the December quarter wage cost index, released in February, which showed private sector pay growth remaining close to a record low and lagging that of the public sector.

Wage pressures, and labour markets by implication, are the most important macroeconomic variables in the global interest rate equation at the moment given their significance for inflation.

This means they are also the most significant variables for currency markets because central banks can only raise interest rates in response to changes in inflation pressures. It is expectations of higher or lower interest rates that dictate the respective fates of the currencies tied to them.