- UK interest rates to rise faster in 2018 than previously anticipated

The Pound is now expected to perform substantially better against the Australian Dollar in 2018 than previously assumed, according to the latest currency forecasts from Lloyds Bank.

Analysts at one of the UK's most recognised high-street banks have raised their GBP/AUD forecasts as part of an upgrade to their overall Sterling projections.

In February, they told clients the Pound could fall against the Aussie Dollar by around 3% in 2018, with an end-of-year target being set at 1.72, which will have erased all of the exchange rate's 2.9% gain so far this year.

However, Lloyds no longer expects this to happen as the outlook for interest rates in the UK, Australia and elsewhere has evolved. This is significant given the powerful draw interest rates exert over currency prices.

“Given the recent strength of the UK (and global) economy, and the associated shift in domestic inflation risk, we have made a change to our UK interest rate forecast,” says Nikesh Sawjani, a UK economist at Lloyds Bank. “We have brought forward the timing of the next rise in UK Bank Rate from August to May, with a second quarter-point rise this year now expected in November.” 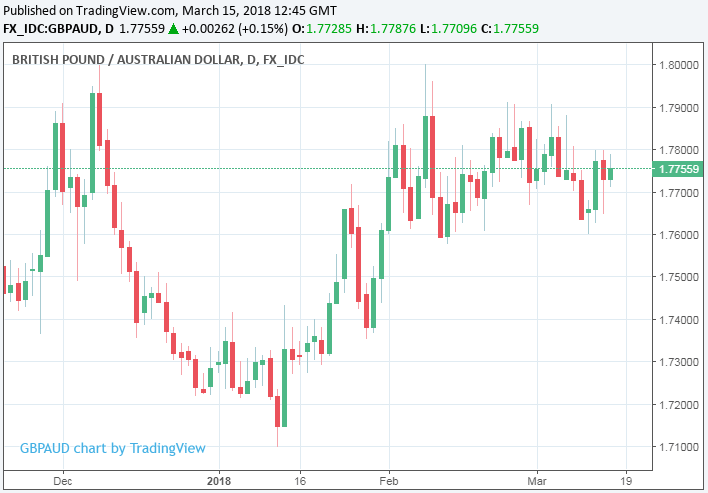 Above: The Pound has enjoyed a strong run against the Aussie Dollar in 2018, but gains appear to have hit a ceiling 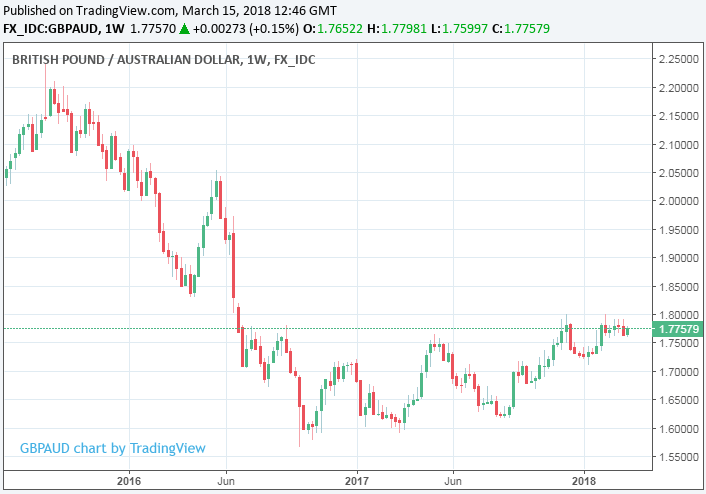 Above: Longer-term charts show the Pound is still historically cheap against the Australian Dollar

Economists at Lloyds were previously quite sceptical of how soon the Bank of England would risk another interest rate rise, given political and economic uncertainties relating to the Brexit negotiations.

However, the BoE warned shortly after Lloyds’ last update in February that it could raise UK interest rates faster than markets expect if the inflation outlook evolves in line with its latest set of projections.

The BoE already raised the Bank Rate, for the first time in a decade, by 25 basis points to 0.5% in November 2017. But its latest forecasts still show the consumer price index remaining above the 2% target as far as the Bank dares to look forward.

UK inflation came in at 3% for the January month, down from the 3.1% seen throughout much of the fourth quarter 2017, but up a long way from the moribund 0.3% seen in June 2016 - the month of the Brexit referendum.

“Almost all the recent rise in UK inflation can be attributed to the fall in the pound. This effect should start to dissipate over the coming months, resulting in inflation falling back as the currency base effects fade,” says Sawjani.

“But, at the same time, domestic price pressures stemming from rising wages and tightening capacity constraints are expected to build.”

Sawjani flags what is also a key concern of the Bank of England. That even though the effect of a devalued Sterling will soon drop out of the monthly inflation numbers, a resilient UK economy and faster global economy mean more natural inflation pressures are now creeping into consumer prices.

“Admittedly, the BoE continues to repeat its mantra that future rate increases would likely occur at “a gradual pace and to a limited extent”. Notwithstanding Brexit uncertainty, however, if capacity constraints continue to build, the BoE may well be obliged to raise interest rates more quickly,” Sawjani adds.

Pricing in interest rate derivatives markets, which enable investors to hedge against changes in interest rates and provide insight into investors’ expectations for monetary policy, implies around a 50% chance the BoE will raise rates again in May.

Any increase in this conviction can be expected to lift Sterling while any deterioration would have the opposite effect.

On the same note, those markets assign a 100% probability to the idea that the BoE will raise rates again before the end September, no matter what.

The situation in the UK is in direct contrast with recent events down under, where few expect the Reserve Bank of Australia to budge from its position that the Aussie economy is not prepared for an interest rate rise.

The RBA held its cash rate at a record low of 1.5% for the 20th month in a row in March, citing low levels of inflation and wage growth, while also appearing to downgrade its economic growth forecasts.

“Having rallied to a new multi-year high against the US Dollar in late January, the Australian dollar has reversed back into its medium-term range. This is hardly a surprise given recent developments,” says Gajan Mahadevan, an FX strategist at Lloyds. "Australian retail sales for December and January disappointed. Moreover, Q4 GDP growth underperformed expectations.”

Mahadevan also notes comments from RBA governor Philip Lowe, made in the March monetary policy statement, where he said there is not “a strong case for a near-term adjustment of policy.”

Pricing in interest rate derivatives markets assign only a 50% probability to the idea that the RBA will raise its interest rate before the end of April 2019.

The differential in interest rate pricing is now expected to afford the Pound-to-Australian-Dollar rate some respite during the coming quarters.

Mahadevan and the Lloyds team forecast the Pound-to-Australian Dollar exchange rate will hold steady around its current level of 1.77 throughout the rest of 2018 before rising gradually to the 1.80 level over the course of 2019.

The Pound-to-Aussie rate was quoted 0.24% higher at 1.7764 during the morning session in London Thursday.