The Pound-to-Australian Dollar exchange rate (GBP/AUD) rose to 1.8571 on Monday, having reached a new three-month low as recently as Friday at 1.8416.

The rebound underway must therefore be considered within the selling pressures GBP/AUD has faced since late September; in fact the retreat from the 2021 top at 1.9154 in August could also be considered the start of a trend of weakness.

For now there is little by way of technical indication to challenge a view that near-term momentum continues to favour the Australian Dollar and any GBP/AUD strength is likely to be challenged. 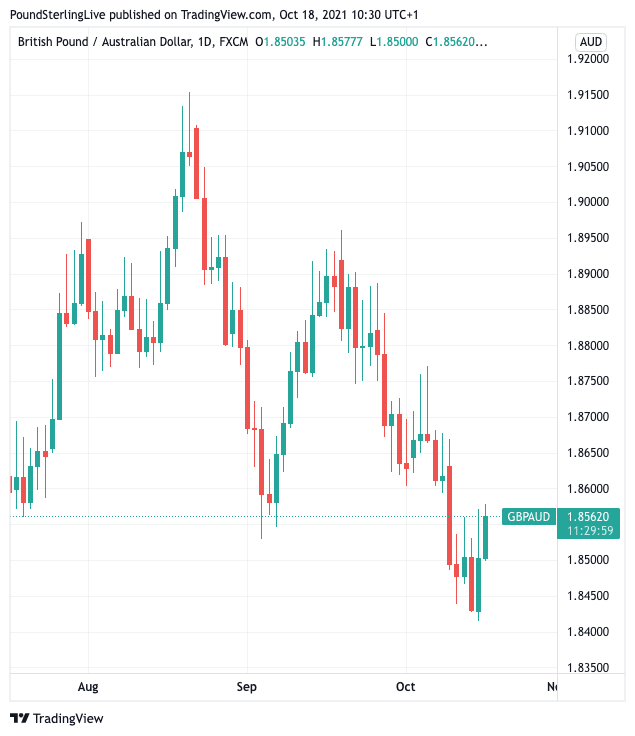 A prime factor in any bouts of Australian Dollar weakness - whatever the weather - can often be found to be soft global investor sentiment, as is seen at the time of writing.

Global stock market indices are in the red as a recent recovery comes to an end with analysts pointing to the release of softer-than-expected Chinese data overnight.

"Weaker-than-expected GDP, industrial production, and fixed asset investment serve to highlight the ongoing difficulties faced by a Chinese economy that continues to struggle with an energy crisis that has forced the closure of factories," says Joshua Mahony, Senior Market Analyst at IG.

Annual GDP in the world's second-largest economy therefore rose by 4.9% year-on-year in the third quarter, disappointing against expectations for 5.2% and the 7.9% recorded in the second quarter.

Industrial production grew at 3.1% year-on-year in September, down on the 4.5% markets were expecting and the 5.3% reported in August.

The weakness is particularly relevant to Australia given the importance of China to its commodity export market.

That said, Australia's abundance of coal and natural gas are proving beneficial in a world crying out for increased supply of these energy commodities, offering the Aussie Dollar insurance.

"Stability across industrial commodities kept AUD crosses range bound. We expect conditions for commodity currencies remain positive, with a focus on offshore equities and US rates," says David Plank, a strategist at ANZ.

Further support for the Australian Dollar came with the lifting of Covid-19 related restrictions in New South Wales recently, with a similar relaxing expected in Victoria at month-end.

The relaxations are anticipated to see a rebound in domestic activity that will allow the Reserve Bank of Australia (RBA) to ultimately bring forward the timing of a first post-crisis interest rate rise.

Markets anticipate such a move towards the end of 2022, but the RBA have been steadfast in their official communications as to lift only taking place in 2024.

The matter of central bank interest rate policy is particularly relevant for the British Pound right now as the first hike is now expected to take place in November.

The Pound rallied last Friday and again on Monday as anticipation for a 2021 rate hike gathers momentum.

The Bank of England's Governor Andrew Bailey gave his strongest hint yet that rates were to rise in an online speech delivered Sunday.

While the prospect of rate rises is on balance supportive of the Pound there is one obvious risk: that the Bank gets cold feet between now and the November policy meeting.

"Markets now see a 70% chance of the MPC hiking Bank Rate next month, up from 33% last wk. This is ludicrous, given the “high option value” the MPC sees in waiting until Dec., when key lab market data will be available. Risks to market rates all to the downside now," says Samuel Tombs, Chief UK Economist at Pantheon Macroeconomics.

A more benign issue to consider is at what point is an aggressive path of rate hike expectations fully discounted into the Pound?

"With markets already fully pricing in a rate hike of 0.15% this year and three more next year, taking the base rate up to 1%, Bailey’s comments are unlikely to push GBP significantly higher," says Jeremy Thomson-Cook, Chief Economist at Equals Money.

So while the Pound is up against the Australian Dollar at the start of a new week a return of confidence to global investors could well create the kind of backdrop that the Aussie Dollar thrives in.

And given the Pound might be increasingly prone to disappointment on Bank of England rate hike pricing, GBP/AUD upside still looks to have its limits.