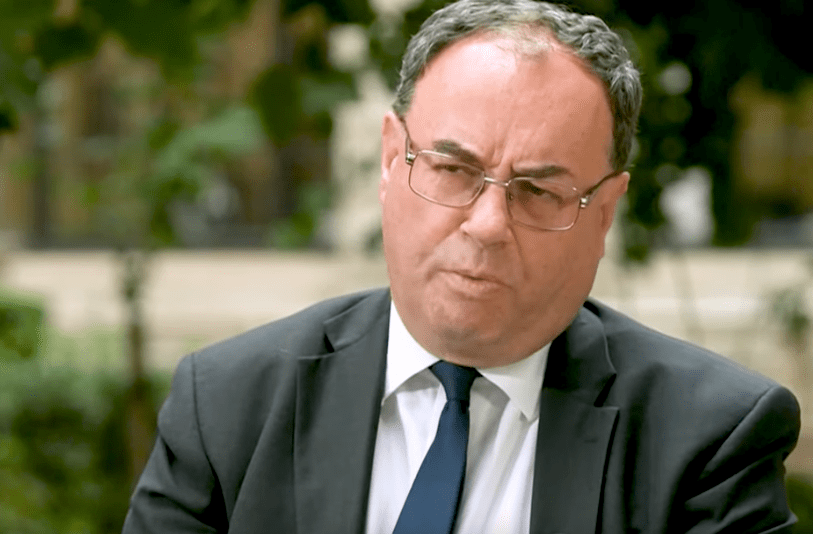 Money market pricing now shows an 88% chance of a 15 bps rate increase on Nov 4, up from 50% ahead of the weekend.

According to foreign exchange analysts, the Pound is presently finding support from expectations that the Bank of England will be amongst the first major central banks to raise interest rates from crisis-era lows.

"On net, the shift in monetary policy should outweigh the negative effects on the currency from slower growth in this case, resulting in modest Sterling appreciation on the margin," says analyst Zach Pandl at Goldman Sachs. 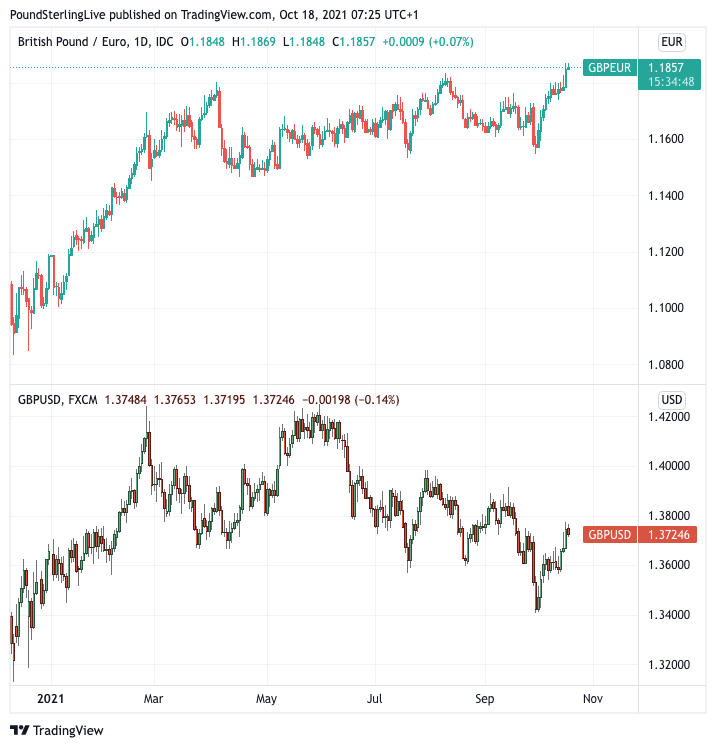 The Pound to Euro exchange rate reached fresh 20-month highs on Friday when it attained 1.1871 and is close to by at 1.1851 at the time of writing on Monday.

The Pound to Dollar exchange rate has rallied through October and is 1.3772 at the time of writing.

Money markets now show a rate rise in November is likely, while as many as three rate hikes in 2022 are now possible.

A key risk to Pound Sterling's gains is that the Bank disappoints and forgoes a November rate rise, but for now the messaging is entirely consistent with an eagerness to raise rates.

"We at the Bank of England have signalled, and this is another such signal, that we will have to act," said Bailey. "But of course that action comes in our monetary policy meetings."

"The MPC might well decide to act on the risk of a sustained increase in expectations without waiting for much more evidence, making a hike at the November or December meeting a live possibility," says Sven Jari Stehn, Chief European Economist at Goldman Sachs.

Bailey has said on a number of occasions now is there is a real prospect that inflation seeps from the supply-side (gas prices, shortages etc) to the demand side (wage demands, businesses pushing up prices).

Bailey said in an interview on October 09 he was "concerned" about above target inflation and that the Bank had "got to prevent the thing from becoming permanently embedded".

Therefore even if surging inflation has its root in supply side difficulties - as is certainly the case now - it can start to influence the behaviour of businesses and consumers.

When this happens inflation becomes organically entrenched in an economy and it becomes an issue for the central bank to address.

But Bank of England 'doves' such as Silvana Tenreyro and Catherine Mann stated last week that they saw inflation as likely to prove temporary as supply bottlenecks will be rectified and energy prices come down.

They are therefore at odds with their peers on the Bank of England's Monetary Policy Committee such as Bailey and Michael Saunders who are worried that inflation risks becoming entrenched.

Researchers find find that a 1pp increase in wage growth raises the probability of a sustained rise in
long-term inflation expectations by about 20pp in subsequent quarters.

"Taken together, our analysis shows that survey measures of long-term inflation expectations have started to rise significantly and are likely to increase further in coming months," says Stehn.

Stephen Roach the veteran U.S. economist who was part of the Federal Reserve's research staff in the 1970s has had a first-hand view on how inflation went from being dismissed as transitory to a truly stagflationary beast during that decade.

In a news article in the FT Roach says the real policy mistake facing central bankers today is not acting too soon, rather it is acting too late.

"As brilliant and lucky as they have been, today’s generation of central bankers is afflicted with the same sense of denial that proved problematic in the 1970s. Due to a lack of experience and institutional memory of that tough period, the risk of another monetary policy blunder cannot be taken lightly," says Roach.

Talk of a Bank of England policy mistake has thus far been confined to those economists who believe raising interest rates would exacerbate any slowdown in growth.

Economists at Crédit Agricole say the Pound's lacklustre performance over much of October is because the market believes the Bank of England is committing itself to a policy mistake by raising interest rates in either late-2021 or early-2022.

"A more aggressive BoE tightening will increase borrowing costs for both households and businesses, while undermining the UK housing market. The impact of the policy will be made worse by soaring cost-push inflation that is eroding households’ real incomes and squeezing firms’ profit margins," says Valentin Marinov, Head of G10 FX Strategy at Crédit Agricole.

"Growing stagflation fears add to the headwinds for the GBP," he adds.

For now though it looks as the policy makers at the Bank are of the view the mistake would be to delay raising rates and allow inflation to manifest, and judging by the Pound's performance over recent days the market is also coming around to this view.