The Reserve Bank of Australia is tipped by a one of Australia's largest lenders to delay the withdrawal of its crisis-era stimulus, a development that might yet limit the scope of the Australian Dollar's fledgling rebound.

The Australian Dollar has in early September recovered from its 2021 lows against the Dollar, Pound and Euro, set in mid-August; but unless the market believes interest rates are set to rise over coming months any rebounds will likely prove tepid.

"We think the RBA will announce a delay in the planned reduction of its weekly bond purchases next week," says David Plank, Head of Australian Economics at ANZ.

The RBA surprised markets by going ahead and reducing its quantitative easing programme in August, a move that would ultimately allow it to end the programme completely in 2022 and then begin considering AUD-supportive interest rate rises.

But given the economy is currently contracting owing to lockdowns another planned reduction in quantitative easing scheduled for September could now be delayed, pushing that distant first interest rate rise even further back.

"An alternative choice is to continue with taper, but delay the next review until February. We think a simple delay is much easier to communicate than this alternative," says Plank.

The decision is however tipped by ANZ to be a "close call" which promises to make the September 07 policy event one that offers some potential volatility in the Australian Dollar: should the RBA go ahead and taper the Aussie could well push higher.

"If the RBA’s communication were to be less dovish, the Australian dollar will probably rally," says Georgette Boele, Senior FX Strategist at ABN AMRO.

But a delay to tapering, and any cautious communications from Governor Philip Lowe, could prompt a sell-off. 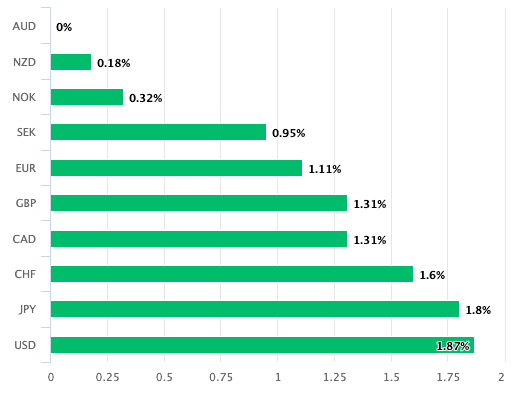 The Australian Dollar is the best performing major currency for the past week (above), aided by an ongoing rally in global equity and commodity markets that has the U.S. Federal Reserve to thank.

The short-term recovery serves as a reminder that the Aussie has a high sensitivity to global drivers and Fed Chair Jerome Powell's speech to the Jackson Hole Symposium last Friday confirmed it would be many months yet before interest rates are lifted, which investors consider supportive of global growth dynamics and equity valuations.

The Australian Dollar has a long-standing positive relationship with optimistic investor sentiment, meaning it tends to appreciate when stocks and commodities rise.

But domestic matters cannot be ignored completely: one would expect the Australian Dollar to be significantly higher given commodity prices remain elevated by historic standards and the S&P 500 index is close to record highs.

Instead, when we look at its 2021 performance we can see the currency is one of the laggards of the G10 space: 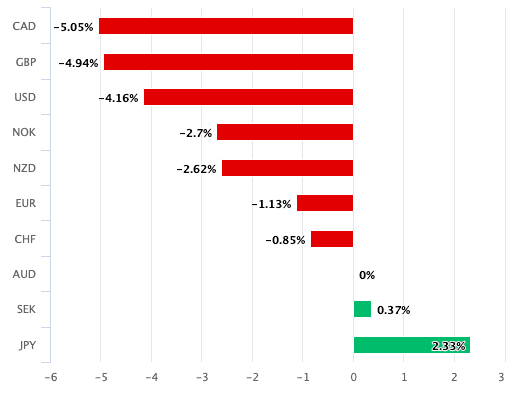 The reason for this underperformance is not hard to fathom: interest rates at the RBA are at record lows, depriving the Australian Dollar of supportive inward investor capital flows.

Back in the early 2010's the Australian Dollar reached record highs against the U.S. Dollar and Pound, strength that came in tandem with a surge in commodity prices and high interest rates at the RBA.

For AUD to find sustained support interest rates would need to start recovering back to pre-crisis levels; but the RBA is hardly in a position to reduce quantitative easing, let alone raise rates.

The country's two largest cities and the majority of its population remain locked down as the government grapples to contain an outbreak of Covid-19, given elimination is now unlikely the spread will inevitably reach remaining territories and cities.

Why would the RBA even consider tapering again in September then?

"While the hit to the economy from the current lockdowns will be much bigger than expected in August – both because more parts of Australia are (or were) in lockdown in Q3 and because the path out of lockdown looks set to be slow – it is likely that the RBA will still be looking for a strong rebound in 2022," says Plank.

The experience of other developed economies confirms the potential for a strong rebound once restrictions are lifted, but lifting restrictions in a country that has for so long been committed to a zero-covid elimination strategy requires a substantial shift in political will and mindsets.

Indeed, while Prime Minister Scott Morrison says the country will ultimately have to live with Covid some states such as Western Australia and Queensland are yet to agree.

"The downside risks to the 2022 outlook have increased and not only for domestic reasons, given a slower China and the global uncertainty posed by Delta. At the very least Australia’s starting point for 2022 will be weaker, implying that wages growth and inflation are lower than previously expected," says Plank.

ANZ says there is not yet any reason for the RBA to go into reverse and increase quantitative easing once more, noting that even with the current lockdowns the economy is stronger than last year.

"In our view the RBA will most likely opt to delay tapering," says Plank.