- GBP/AUD bottoms, may be gearing up for rally back to 2.0.
- As GBP outperforms to keep European FX in reflation mode.
- Offsetting the impact of ongoing AUD strength for GBP/AUD.
- Amid possible, ongoing PBoC rethink of FX reserve basket.

The Pound-to-Australian Dollar rate rose on Tuesday, helping preserve what remains a year-to-date gain for a British currency that is increasingly a market favourite for 2021, although nascent price action may be only just the beginning of a likely-losing battle by the Aussie to hold the GBP/AUD rate down.

Pound Sterling rose above 1.41 against the U.S. Dollar and 1.16 against the Euro on Tuesday, all while trading 0.34% higher and at around 1.7835 against the Aussie despite widespread declines in global stock markets and gains for many commodity prices; an unusual combination.

"If we do get further contagion across asset markets that also eventually spreads to commodities, the G10 smalls will be in for a drubbing, particularly the highest flying AUD," warns John Hardy, head of FX strategy at Saxo Bank.

Precious metals were lower and agricultural commodities were mixed on Tuesday while London Metal Exchange (LME) metals were mostly higher in what would typically be a supportive turn of events for the Australian Dollar, although none of this prevented the Pound-Australian Dollar rate from rising.

Sterling has gained over all major currencies thus far in 2021 but especially during the February month, which has led to a rising 'beta' correlation with risk assets and currencies like the Aussie that are most sensitive to the latter. 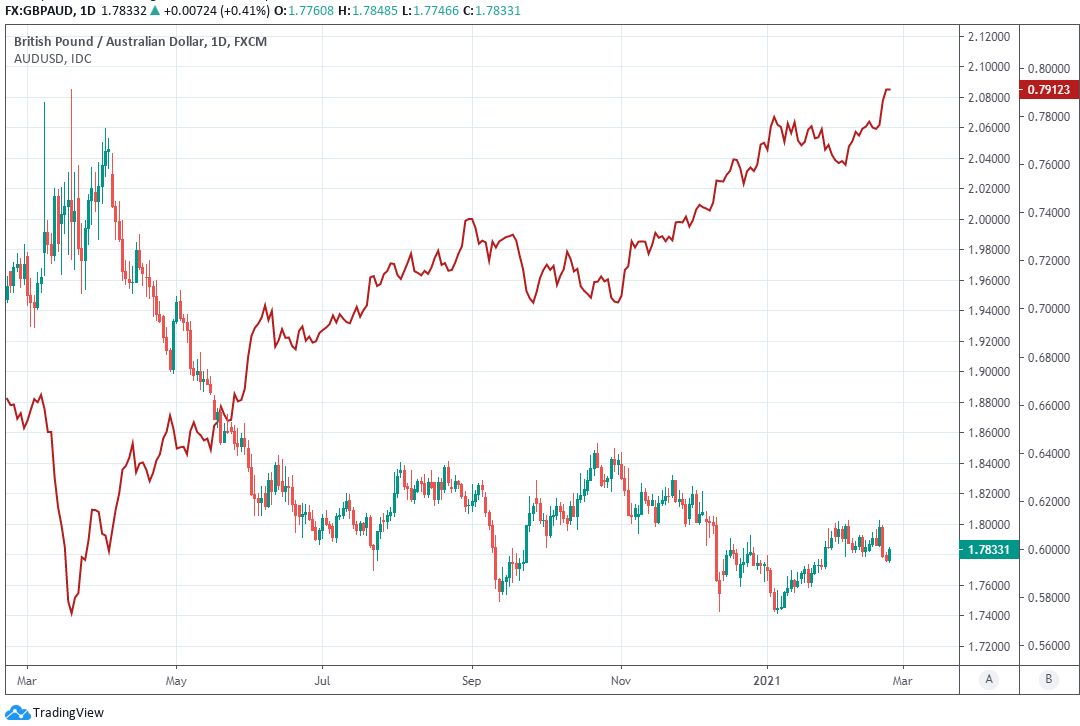 Many observers have connected this outperformance to an almost best-in-class vaccination campaign, but this was well telegraphed as early as December while Sterling had little traction until European Central Bank (ECB) complaints about last year's Euro rally put a brake on EUR/USD in January.

"The euro is too low against the dollar but none of the main drivers are pushing it higher. It will only go up on the back of a wider dollar sell-off and probably continues to lag others. As much as any domestic news this is what can support GBP/USD as a popular buy and keep EUR/GBP drifting towards 0.85 [GBP/EUR: 1.1764]," says Kit Juckes, chief FX strategist at Societe Generale. "On the data front, we've seen UK labour market statistics and by and large, ignored them. Q4 saw more job losses than expected, January looks better."

Europe's single currency has pulled back from multi-year highs around 1.2350 since President Christine Lagarde said on January 13 that the ECB is "extremely attentive" to EUR/USD, which had risen by 10% in the year to that point and lifted the trade-weighted measure of the Euro sharply.

This was problematic for ECB policymakers because it cheapened the cost of imports and was threatening to reduce consumer prices such that the bank would have risked years more in which its inflation target goes unmet without at least a verbal intervention to make its objections known.

Since then Sterling, which accounted for 15% of the most concentrated measure of the trade-weighted Euro as recently as 2018, has risen broadly but especially against the Dollar, Euro and European currencies in general. 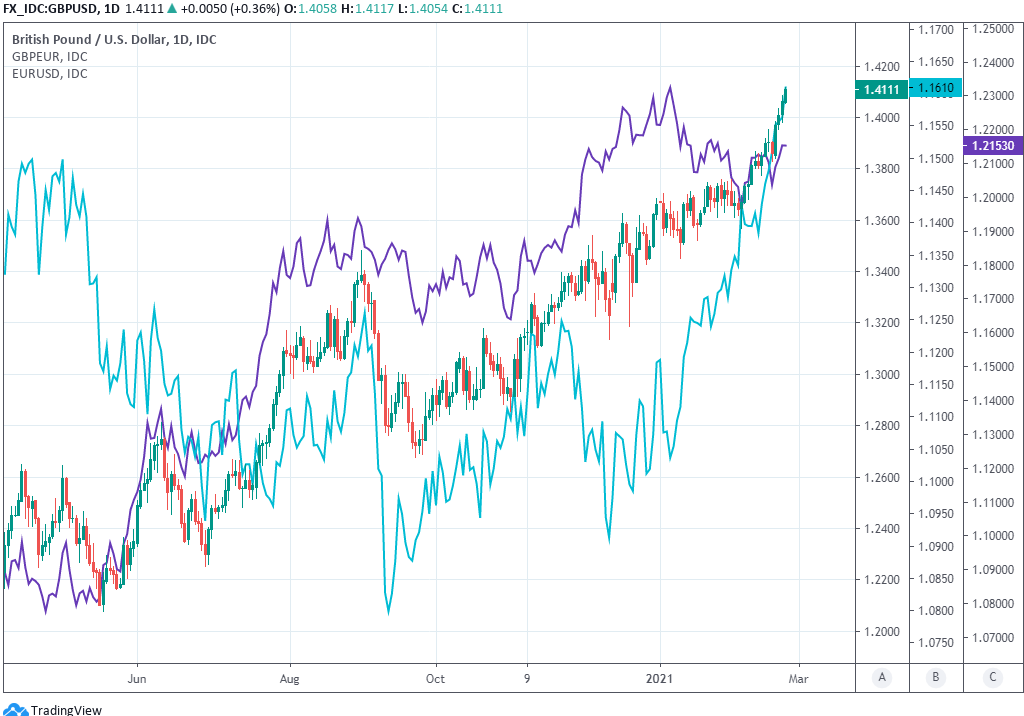 Above: GBP/USD (red & green) rising while EUR/USD (purple) is sidelined from Jan 13, which has the effect of lifting GBP/EUR (blue) from around 1.12 to 1.16. GBP/EUR always closely reflects relative moves in GBP/USD & EUR/USD.

"As you say, the PBOC are navigating expertly under the radar," says Dr Savvas Savouri, chief economist and partner at Toscafund Asset Management, responding to questions from Pound Sterling Live. "Still plenty of time for sterling to reach at least 1.30 euros before 2022 and at the very worst; 1.60 for cable."

Underappreciated as a driver of Sterling's rally - and a key reason why the Australian Dollar may struggle to keep the GBP/AUD rate suppressed in the months ahead - is the role potentially played by central bank currency reserve managers and most notably those at the People's Bank of China (PBoC).

Analysts have noted this year that central banks are building foreign exchange reserves in general by selling domestic currency and buying the U.S. Dollar, but it's possible if-not likely that amongst all of this, the PBoC has been diversifying its basket away from the greenback, into a more multilateral composition.

The PBoC's desire, if-not need to diversify out of the U.S. Dollar is widely understood in the market and a frequently-held assumption, but it's been the subject of little discussion thus far in February. Nonetheless, this as much as anything else is what could explain the steamrolling 2021 rally in Sterling.

"[GBP/USD] continues its recent meteoric rise and is leaving us scratching our heads somewhat given the supposed weight of longs in the spec community, the theme of corporate EURGBP demand from our franchise and the fact that consistent [real money] demand still eludes us (at JPM anyway). Also, Johnson’s exit plan was pretty cautious to say the least," reads a Tuesday morning commentary from the J.P. Morgan FX dealing desk in London.

Toscafund, a London based multi-asset hedge fund with around $4 bn under management, has been looking for the Pound to share in a more multipolar reserve basket for a year now and said in a note to investors in December that Sterling could take the market by surprise this year as a result. 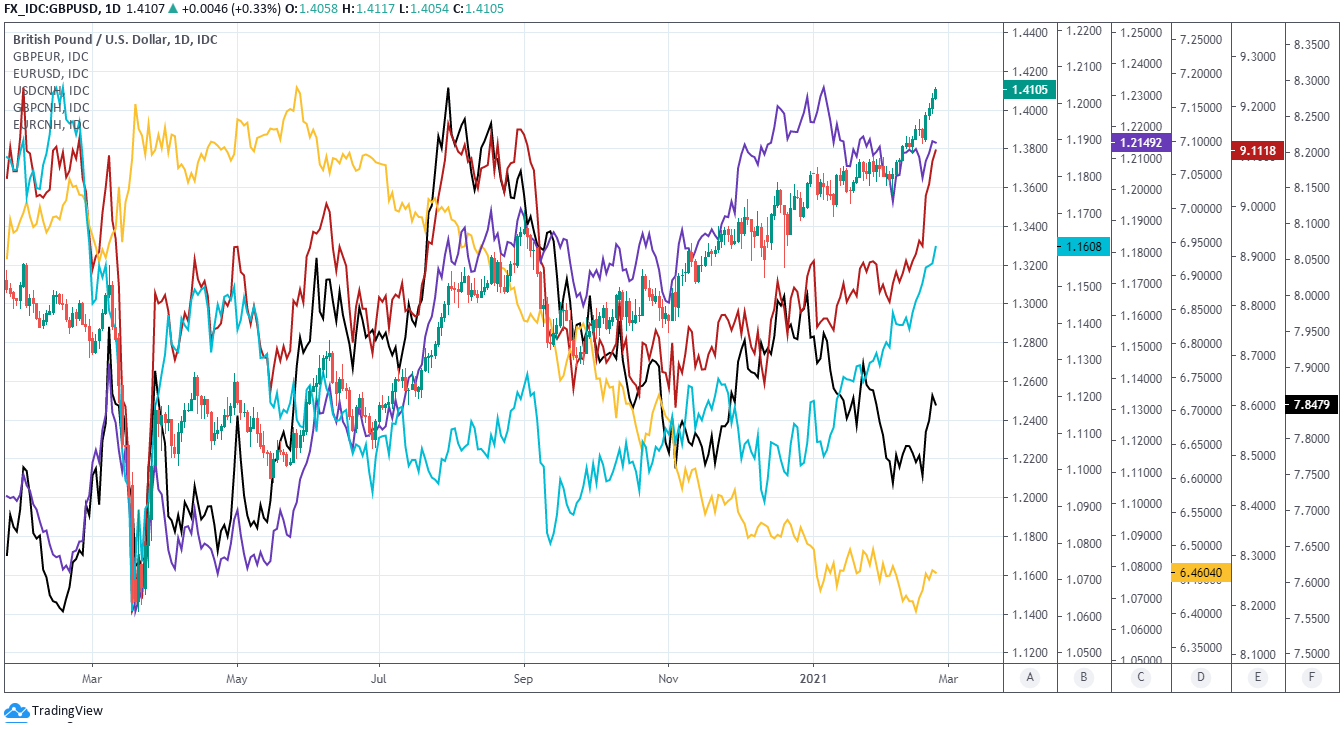 Above: This graph is the same as above but adds Chinese exchange rates. Notably; GBP/CNH (red) rises amid an unusual range-trade in USD/CNH (yellow) that has undermined many a cross-currency correlation in 2021. USD/CNH has barely moved in 2021, leading the Yuan to weaken against many major currencies although none more so than GBP. Buying of GBP/CNH - which reflects GBP/USD and CNH/USD - appears to explain the rally in GBP/USD and GBP/EUR.

"There will be those who will claim it happened without warning. Those claiming as much will have clearly been negligent in failing to see the all too clear signals sent," Savouri wrote. "Beijing has after all been systematically disintermediating the dollar from its commercial and financial system. It has: signed currency swap arrangements all over the world; run down its Treasury holdings, by spending them on assets around the world and adapted its yuan management from a strict bilateral approach relative to the dollar, to a multi-currency one."

China had $3.2 trillion of FX reserves this January, according to the State Administration of Foreign Exchange, and would have little choice but to be a buyer of the Euro in the event of any move to diversify away from the Dollar, given the Titanic sizes of the U.S. and European currencies.

But in a world where the European Central Bank is fearing for its inflation target, given the strong earlier ramp up in the Euro-Dollar rate, there's good reason for thinking that the PBoC would first need to increase its reserve allocation to the Pound if it's to be able to continue buying Euros this year.

This is due mainly to the Pound's significant share of the trade-weighted Euro rate, combined with the fact that Sterling has generally spent the last five years languishing close to historic lows against all rivals, and for Brexit-related reasons that no longer hold such sway over it.

"When Beijing shocks the dollar down against the yuan, it is very likely that it ensures the yuan moves up far more slowly against the other constituents of the weighted basket it is now managed against. It will act in this way to mute the yuan’s overall trade-weighted appreciation," Savouri wrote. 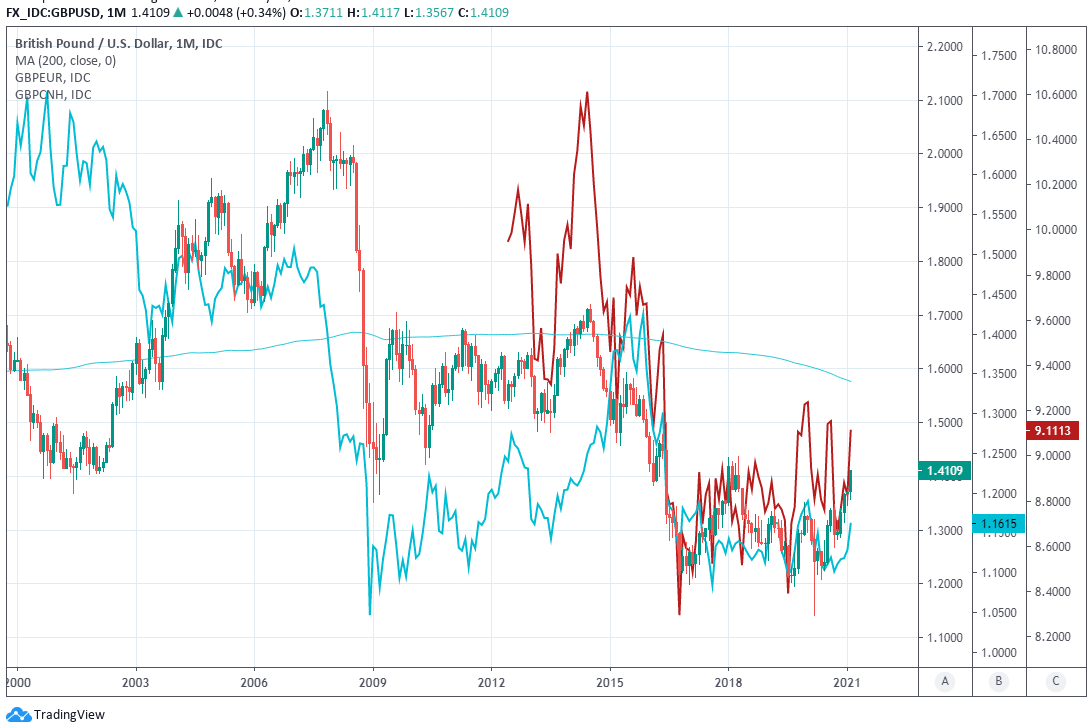 Above: This graph shows GBP/USD, at monthly intervals, sitting a long way below its 200-month long-term average sited near 1.60. It's rising faster than GBP/EUR (blue line) but not nearly as fast as GBP/CNH (red line).

"To achieve this I have no doubt the PBOC will actively buy the currencies it wishes to temper the yuan’s ascent against, and accumulate them as foreign reserves," Savouri says.

All major non-Sterling components of the trade-weighted Euro have already risen to such an extent in the last year that the relevant central banks have also begun to fear for their inflation targets, leading them to complain about currency strength in very much the same way as the ECB has.

This has left more than half the trade-weighted Euro complex in a position where it's unable to rise without an offsetting adjustment first coming from another part of it, which is where the Pound enters into the picture.

Sterling is one of few currencies large enough to fill the relevant gaps and which at same time actually has scope to appreciate from current levels, largely due to years of Brexit-inspired undervaluation that may now be less necessary.

Toscafund's Savouri anticipates that a steady reversal of that undervaluation will lift the main Sterling exchange rate GBP/USD back to 1.60 this year, which points to significant upside for the Pound against the Australian Dollar.

For illustrative purposes, should GBP/USD rise that far, GBP/AUD would trade around 2.0 and at its best levels since March 2020 even if the AUD/USD rate rises back to 0.80 or above later this year.

This is why a resurgent Australian Dollar could struggle to hold the Pound-to-Australian Dollar rate down in the months ahead. GBP/AUD always closely reflects relative price action in GBP/USD and AUD/USD. Readers can find further information in the linked February op-ed from Pound Sterling Live. 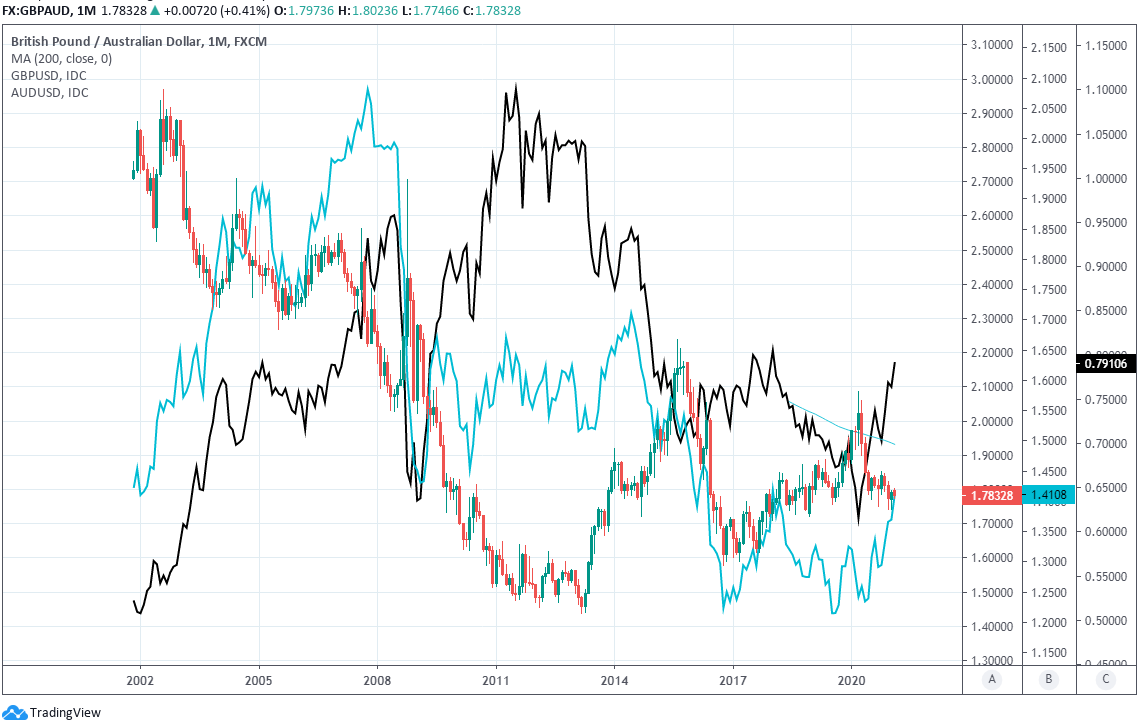