Foreign exchange strategists at RBC Capital Markets - the Canada-based international financial services provider and investment bank - are this week calling time on the Pound's rally against the Australian Dollar citing a divergence in sentiment between the Bank of England and Reserve Bank of Australia as a potential catalyst for a move lower.

Conviction on a move lower in GBP/AUD is high enough for Adam Cole, Chief Currency Strategist at RBC, to name selling GBP/AUD his trade of the week.

"We fade GBP’s outperformance last week heading into this week’s BoE announcement and Inflation Report. Although the Bank will acknowledge that the initial rebound in activity from the April trough is somewhat stronger than expected, the focus will be on the risks to activity going forward and permanent damage done in the downturn," says Cole.

The Pound-Australian Dollar exchange rate has risen for eight days in succession, and we noted yesterday that from a technical perspective the outlook continues to favour further Sterling, but we note that there are a significant number of calendar risks due this week that could thwart further Sterling upside. 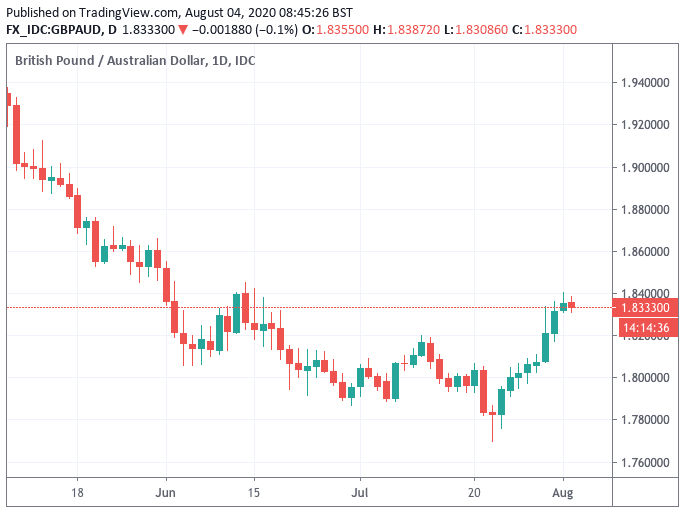 "The BoE’s commitment to take further action as necessary is likely to be reiterated and with forward rates only pricing a small risk of negative rates, there is plenty of scope for conventional policy expectations to adjust to the downside," says Cole.

The RBA by contrast on Tuesday opted to keep interest rate settings unchanged, while indicating they would continue to keep Australian yields steady around the 0.25% level.

RBA Governor Philip Lowe said the economy’s downturn has been less severe than expected and that a recovery is now underway across the country despite renewed restrictions on activity in some of Australia’s largest states. The recovery will be uneven and bumpy, the bank acknowledged, justifying its decision to leave the cash rate and three-year bond yield targets unchanged at 0.25% in line with market expectation

With the RBA steering a steady course, a more downbeat Bank of England would provide the relative divergence that could turn GBP/AUD lower and RBC Capital are forecasting any near-term declines to target 1.80 once more.

However, analysts at Singapore-based OCBC say the Australian Dollar is likely to stuggle in the near-term, a view that if correct could see the GBP/AUD exchange rate's recent run of strength extend further in line with the positive technical setup underpinning the pair's recent advance.

"The AUD may come under pressure, especially on the crosses. A number of negative macro drivers down under – data-prints turning soft over the past month, virus counts re-peaking in Victoria and mobility trends turning south," says Terence Wu, FX Strategist at OCBC.

Wu is focussed on Australia's domestic developments where a growth in the spread of the covid-19 virus has seen restrictions in Victoria tightened to include a nighttime curfew on residents, a development that will dent consumption and consumer confidence in August.

"Negative macro drivers are piling up for the AUD amid the spike in virus cases and the slight downturn in macro data-prints. Do not rule out some AUD underperformance," says Wu.

There was a slew of data out Tuesday that showed a mixed outlook for the economy, with retail sales for June grew 2.7% month-on-month according to the Australian Bureau of Statistics, which was better than the 2.4% expected by markets, a beat that will ultimately be ignored by markets that will be more interested in near-term data pulses that incorporate the impact of the Victoria shutdowns.

However more timely data out from ANZ Bank on Tuesday shows for Victoria spending declined 11% year-on-year for the week to 1 August, while spending grew just 3.5% year-on-year in New South Wales hinting of another slump in official retail sales data in coming months.

"Melbourne’s second lockdown has not only eroded much of the spending growth seen in Victoria, it has also moderated activity in New South Wales," says Adelaide Timbrell, Economist at ANZ.

ANZ data meanwhile showed spending in the rest of Australia was much more positive coming in at +8.2% year-on-year for Australia excluding New South Wales and Victoria.

While the domestic environment has certainly deteriorated somewhat, and could ultimately introduce some elements of weakness into Aussie Dollar rates, the global picture remains supportive of the currency with trade contributing a significant pillar of support.

According to data out Tuesday, Australia's trade balance showed a surplus of A$8.20BN for June.

While this was weaker than the consensus expectation for A$8.8BN, from an Aussie Dollar perspective the run of strong trade surpluses are overwhelmingly on the supportive side.

Metal ores, particularly iron ore, drove the surplus, up $941mn on higher prices and increased volumes. Gold, often volatile, spiked in the month, up by 41%, +$687mn.

But it is not just the export of iron and gold that is underpinning Australia's trade position as the net services position has swung from a small deficit, -A$0.1bn, to the largest surplus on record, at A$2.5BN in June.

Taking all the above into accoint, while the domestic scene is likely to provide a drag for the Australian Dollar the external and trade picture remains supportive. However, the obvious risk to the outlook is a deterioration in global commodity prices and a deterioration in global trade linked to China-U.S. trade disputes and any further flare-ups of the covid-19 pandemic.