The GBP/AUD exchange rate is up a further third of a percent at 1.8379 at the start of the new week and month, adding to last week's 1.74% gain.

The weekly charts suggest the pair might have based at 1.7948, with the sharp losses of the April-June period fading in late June and allowing the formation of a base from which a broader recovery might evolve. 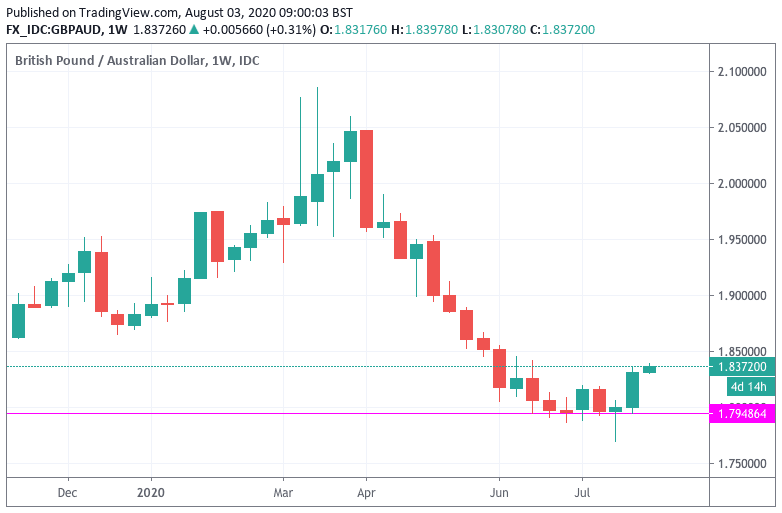 This recovery does now appear to be underway and we would look for further advances on the basis that daily momentum now looks to be constructive according to various technical readings which include a RSI at 65, placing it firmly in the positive bracket.

The relative outperformance of Sterling continues to divide the analyst community, with some saying the UK currency is outperforming due better than expected economic readings of late while other say that the prospect of a Brexit trade deal being struck in October is one reason to ease back on negativity to the currency.

One interesting view point to note is made by Marshall Gittler, Head of Investment Research at BDSwiss Group, who notes that the UK's proactive approach to containing the covid-19 pandemic could be one reason for Sterling's recent outperformance.

"The UK government said it will reimpose tougher social distancing measures in parts of the country, PM Johnson announced that further easing of restrictions will be delayed due to the increasing number of cases," says Gittler. "The recent increase in cases doesn’t seem that much worse than anywhere else, but of course the trend is the problem. I applaud the UK government’s quick move to prevent the situation from getting worse, unlike in some countries. Perhaps that’s why GBP is up: market approval for early steps to avoid an even worse crisis later."

The further easing of lockdown restrictions in England - due to come in on the just passed weekend - has been postponed for at least two weeks, after an increase in coronavirus cases while outbreaks in northern cities has seen further localised lockdowns enacted.

Meanwhile Australia continues to battle a second wave, with authorities in Victoria on the weekend announcing tough new stage four restrictions for metropolitan Melbourne, including an overnight curfew.

The restrictions have been brought in to get community transmission – cases where the source of the transmission cannot be determined – under control.

The country is battling a second wave of covid-19 infections, centred on the state of Victoria, which has in turn resulted in a tightening of movement across the country as other states maintain a vigilante watch over interstate movements.

The net result is a shuddering halt to Australia's economic recovery, something that should resonate with the Reserve Bank of Australia (RBA) who meet on Tuesday morning.

The RBA meeting forms the Australian Dollar's main domestic event of the week and expect the RBA to reference the increase in covid-19 cases, and the economic uncertainty this evolving situation presents for the outlook.

However, there is little reason as yet to believe that the domestic covid-19 situation will prompt a sizeable reaction from the RBA, and for this reason we would expect the Australian Dollar to remain relatively immune to domestic developments.

"The RBA stood pat at its last meeting on 2 June and I see no reason why they should make any changes at this meeting," says Gittler. "Its Yield Curve Control (YCC) program is working nicely. Since the policy was instituted on 19 March, three-year Australian government bond yields have remained well within their target of around 0.25%." 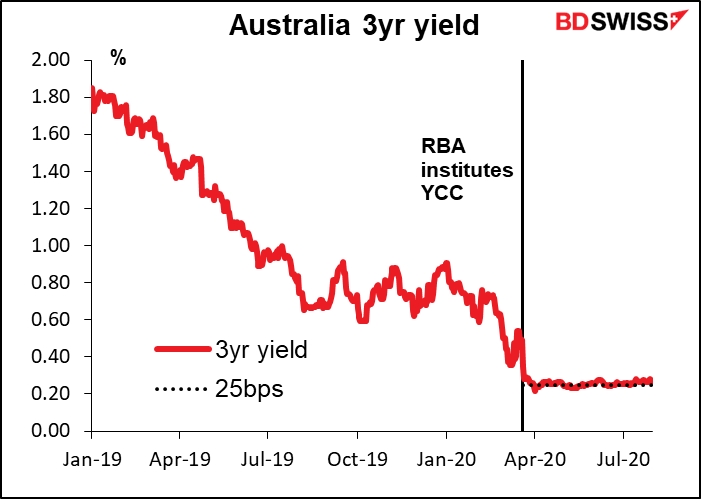 The above chart, courtesy of BDSwiss, shows the RBA's current policy of keeping yields on government bonds at stable levels is working to plan and therefore expectations for a major policy announcement are low.

Regardless, it must be noted that the Australian Dollar's break-neck rally of the April-June period has certainly come to an end, and we wonder just how much a role the domestic picture has in this.

As such, we would be wary of any further deterioration in the local pandemic as well as any negative surprises from the RBA which would add to the currency's recent underperformance against the Pound.

But, when approaching GBP/AUD, it must be noted that Sterling also has a central bank decision ahead in the form of Thursday's Bank of England policy meeting, where interest rates are expected to be kept unchanged but markets will be looking for signals from Threadneedle Street as to whether quantitative easing will be expanded once more.

The key question under consideration will be whether the nascent economic outperformance has registered with the Monetary Policy Committee to the extent they sound a more upbeat tone about the outlook.

If this is to be the case, we would expect Sterling to find some support from Thursday's event as a stronger economy would potentially mean leas quantitative easing in the future, based on the rule of thumb in foreign exchange markets remains that increases to quantitative easing = a weaker currency.

"Expectations are for unchanged rates and QE, although a potential display of openness to further monetary stimulus soon should weaken the pound, especially if the negative rate option is mentioned. An expansion of QE would have a smaller impact," says Asmara Jamaleh, Economist at Intesa Sanpaolo.