The Australian Dollar got a free pass from the Reserve Bank of Australia (RBA) Tuesday when its recovery went unremarked upon in the latest policy statement, with the bank instead taking a less downbeat view of the economy.

Reserve Bank of Australia Governor Philip Lowe said Tuesday that the economy’s downturn has been less severe than expected and that a recovery is now underway across the country despite renewed restrictions on activity in some of Australia’s largest states. The recovery will be uneven and bumpy, the bank acknowledged, justifying its decision to leave the cash rate and three-year bond yield targets unchanged at 0.25% in line with market expectations.

"In the baseline scenario, output falls by 6 per cent over 2020 and then grows by 5 per cent over the following year. In this scenario, the unemployment rate rises to around 10 per cent later in 2020 due to further job losses in Victoria and more people elsewhere in Australia looking for jobs," the RBA says.

The economy is expected to recover most of its coronavirus related loss before the end of next year while the board “is committed to do what it can” to support jobs, incomes and businesses across the country.

To this end the bank said that it will buy Australian government bonds for the first time in months on Wednesday to address and increase in yields, before cautioning that it will continue to intervene in the market as necessary.

"Despite the monthly average A$TWI being at the highest level since Jan 2019, the RBA again said nothing about the exchange rate. The fact that the A$ popped higher after the announcement is thus not a surprise, and we may see some further strength into European trade," says Robert Rennie, head of financial market strategy at Westpac. "The A$ should remain capped by 0.72 and underperform on crosses such as EUR/AUD and GBP/AUD." 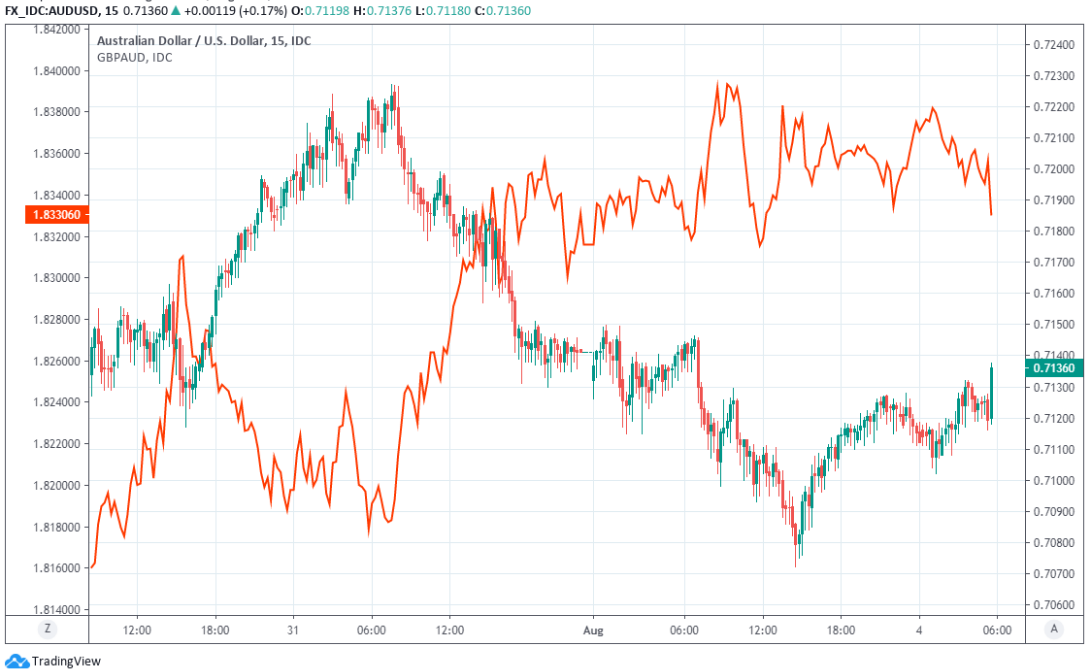 The RBA was less pessimistic tone on the outlook for the economy despite Victoria, Queensland and New South Wales reintroducing varying degrees of restriction on activity amid a second wave of coronavirus infections that’s seen Australia’s total number of confirmed cases double in the last month.

Australia’s central bank also did not mention the currency, despite having expressed unease about its recovery in earlier statements and having a history of attempting to talk the antipodean unit out of sustained moves to the upside. The Australian Dollar rose tepidly against the U.S. Dollar, Pound and other major currencies following the statement.

“Victoria has re‑tightened restrictions on movement, including the introduction of stage 4 restrictions across metropolitan Melbourne for six weeks.  The direct economic impact of the stage 4 lockdown will be significant.  As a result, our GDP and employment forecasts are under review.  Victoria accounts for around one fifth of Australia’s economy,” says Kim Mundy, a strategist at Commonwealth Bank of Australia. “AUD/USD can remain elevated because of the ongoing weakness in the USD. “

Australia’s Dollar was quoted higher alongside all major currencies around the London open with a less pessimistic RBA and an $8.20 bn June trade surplus having aided it higher, although major currencies will likely take their lead from stock markets as well as the ebb and flow of risk appetite through the remainder of the Tuesday session. Retail sales were also revealed to have risen by 2.7% in June, building on a 2.4% increase from May, although this was the month before the second wave took hold.

Investors will be on the lookout for signs of progress in cross party talks between U.S. lawmakers who were unable to agree last week on the shape of a spending bill that would extend enhanced welfare benefits to American households whose incomes have been disrupted by the pandemic.

“Australia recorded another strong surplus of AUD8.2bn in June, up on a downward-revised May surplus of AUD7.3bn. The lift was a result of a rise in exports as iron ore and non-monetary gold exports increased strongly. Imports also rose overall. Of note was the rise in consumption goods imports after a material decline in May,” says Hayden Dimes, an economist at ANZ. 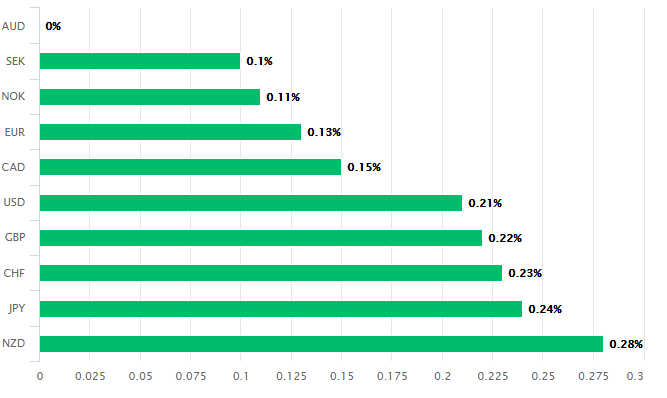 Investors are hoping that an agreement on a fiscal support package can be reached and implemented before August 07.

"AUDUSD – a key USD pair we are focusing on for signs of a broadening USD comeback as the pair is so close to the pivotal 0.7050-0.7000 zone that was recently cleared on the way up," says John Hardy, chief FX strategist at Saxo Bank. "A failure of this area to hold would represent a significant setback for the bulls in this pair and USD bears more broadly and possibly point to retrenchment back toward 0.6700, the 200-day moving average."

Australia declared 305 new coronavirus infections on August 03, down from 641 the prior day but lifting the total to 18,728. This is after Victoria state declared a “state of disaster” Monday and placed the state into a stage four ‘lockdown’ that includes a curfew and more restrictions on a wide array of businesses.

“We think the market is starting to get a bit nervous in carrying AUD longs as the virus disrupts reopening efforts. NZD will not be immune either, and will likely be dragged down by AUD. We like CAD longs vs. AUD and NZD,” says Mark McCormick, global head of FX strategy at TD Securities.

Rising infections are hampering the third-quarter recovery and could threaten the Aussie Dollar’s appeal to investors. AUD/USD had risen close to 30% from its March lows but analysts have advocated in recent days that investors take profits on any earlier wagers in favour of the Aussie.

“AUD/USD has failed ahead of the 200 week ma at .7259 and the 55 month moving average at .7284. The daily RSI has diverged and we would allow for a retracement. We have a near term uptrend at .7098 and this guards .7031 the December high and the 4 month uptrend at .6871. Key support is offered by .6778/74,” says Karen Jones, head of technical analysis for currencies, commodities and bonds at Commerzbank. 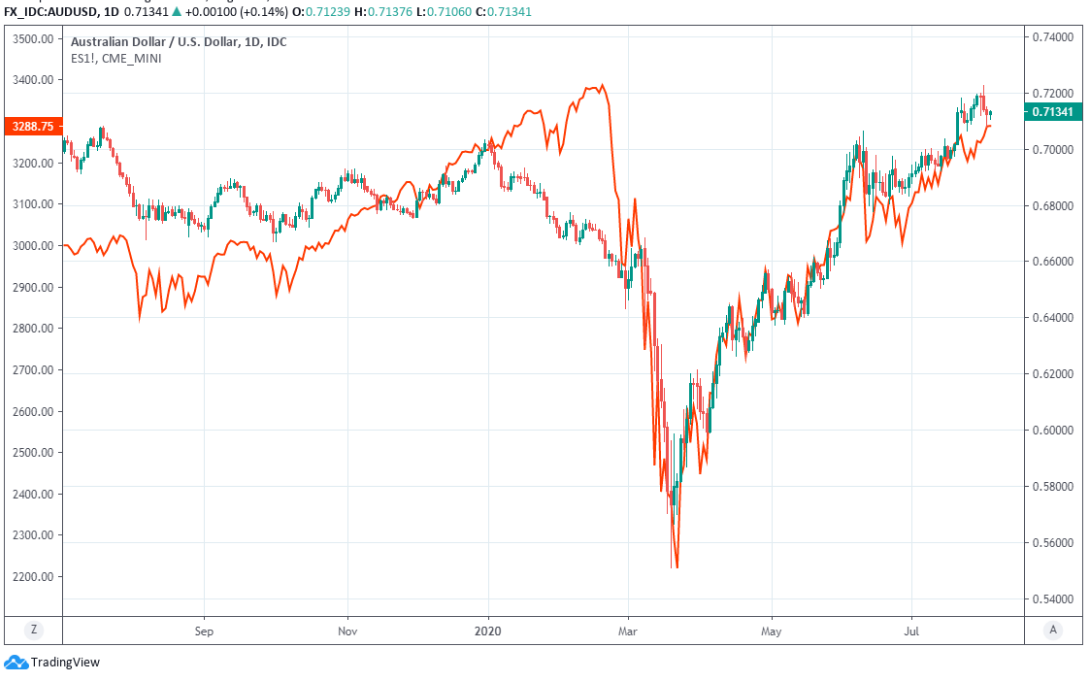