Sterling and UK government debts were the biggest fallers while Portuguese indices saw the heaviest losses of advanced economy stock markets but were followed closely by French and German indices.

Meanwhile, in commodities oil prices saw losses of more than five percent but even this was not enough to support risky currencies previously burdened by the effects of earlier extraordinary price increases.

"The ‘USD-smile’ continues to dominate the FX market price action with both growing US rates and UST yields as well as weak market risk sentiment giving the USD a boost in the wake of the September Fed meeting," says Valentin Marinov, head of FX strategy at Credit Agricole CIB. 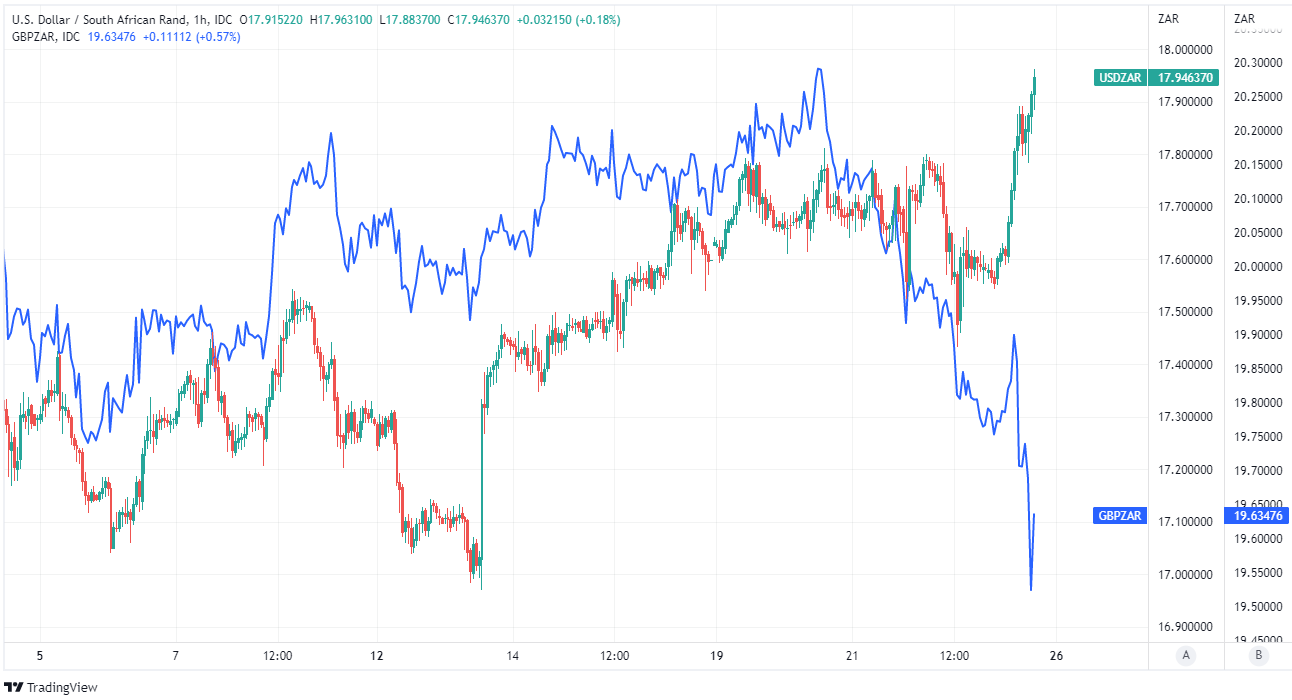 Above: USD/ZAR shown at hourly intervals alongside GBP/ZAR.

"Next week, focus will be on the latest developments of the war in Ukraine and its impact on the European energy market, the Eurozone September HICP and the German ifo as well as the outcome of the Italian general election over the weekend. In addition, focus will be on the core PCE data out of the US and Fed speakers," Marinov wrote in a Friday research briefing.

Friday's losses for risky assets may have been exacerbated by declines in Sterling resulting partly from UK government fiscal policy, although many were already under pressure in what has been a volatile second half of the week.

Risky currencies had been lifted widely but also briefly on Thursday when Japanese authorities intervened in the local market to arrest declines in the Yen, which reached another new millenium low following September's Federal Reserve (Fed) policy decision on Wednesday.

"On the back of another inflation surprise last week, the Fed hiked another 75bp and signaled more to come. The outlook of the FOMC participants looks more hawkish. The median of Fed Funds projections is now at 4.4% for end-2022," says David Hauner, head of EM FX strategy at BofA Global Research.

"We remain cautious EM as US rates continue adjusting higher on the back of persistent inflation. We expect some worsening of the EM growth-inflation mix. We stay long USD vs ZAR, CNH, INR and KRW," Hauner said on Friday. 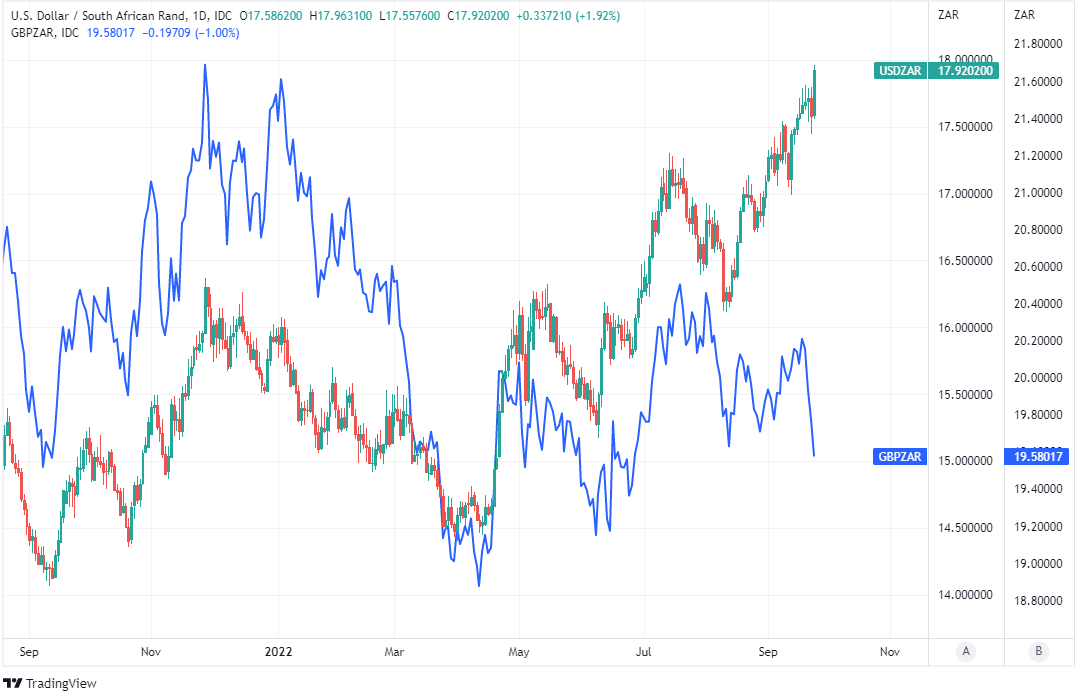 Thursday's relief was short-lived and despite Friday's declines some strategists do look for further weakness in many currencies relative to the Dollar.

However, in relation to the Rand, what some may overlook is its outperformance in the wake of September's South African Reserve Bank (SARB) decision to echoe the Fed by lifting its cash rate 0.75% to 6.25%.

Notably, the SARB also said local inflation is likely to return to the midpoint of its three-to-six percent target band next year if anticipated declines in energy and food prices are realised, placing the Rand's inflation-adjusted yield offering to the market on a trajectory of improvement.

"Despite the SARB “front-loading” hikes recently, the rates story does not lend much support to ZAR compared to its LatAm peers, unless the SARB turns significantly more hawkish,"says  Daria Parkhomenko, an emerging market FX strategist at RBC Capital Markets.

"With this coming against a backdrop of our ongoing USD-positive view and China’s negative growth backdrop, the bias is to the upside for USD/ZAR," she and colleagues warned in a Friday research briefing. 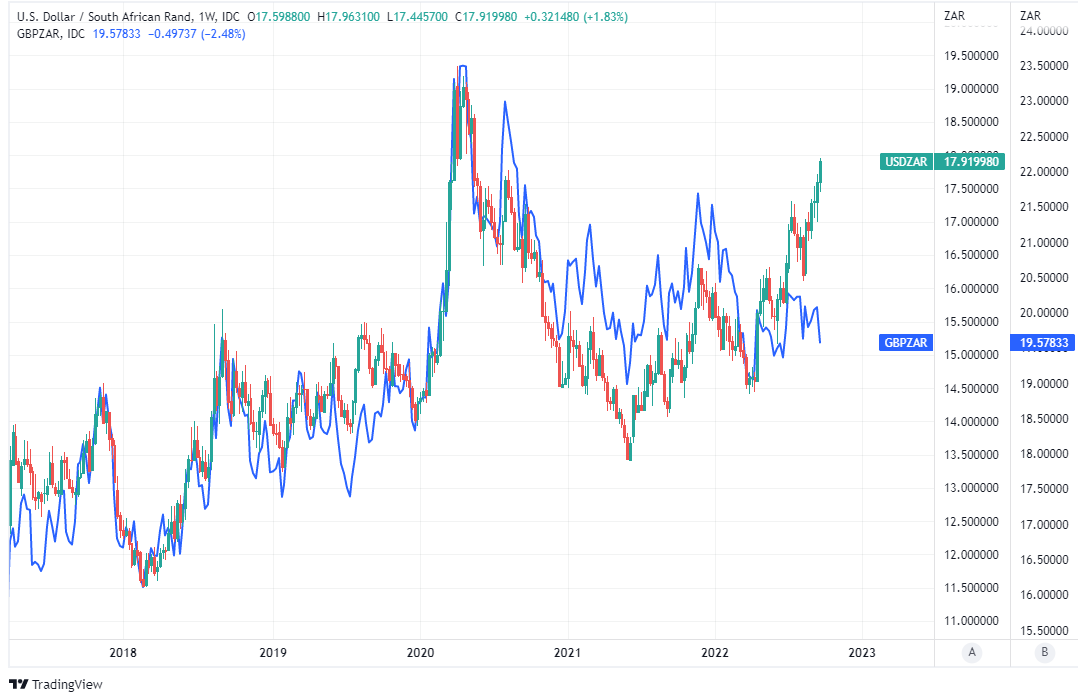 Above: USD/ZAR shown at weekly intervals alongside GBP/ZAR. 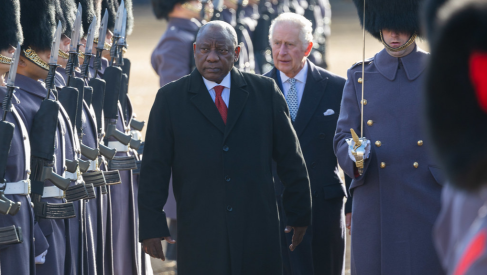