The Japanese Yen rallied sharply against all currencies on Thursday following reports suggesting the government in Tokyo had intervened in the foreign exchange market in order to stem declines in a currency that has been under siege from speculative sellers through much of the year.

Japan's Yen had previously fallen to another new millenium low on Thursday after the Bank of Japan (BoJ) elected to continue with a longstanding set of monetary policies and as the Dollar strengthened following September's interest rate decision and forecast update from the Federal Reserve (Fed).

However, the sharp rally in USD/JPY was more than reversed during morning trading in Europe and around the time that vice finance minister for international affairs Masato Kanda was reported to have told local media that the government had stepped into the market.

"Today’s decision effectively draws a line in the sand at 145 which, provided that policymakers follow through on today’s actions, may now become at least a near term ceiling for the USD/JPY rate," says Jonas Goltermann, a senior markets economist at Capital Economics.

The intervention follows a long list of warnings from Japanese government officials seeking to discourage sharp and abrupt moves in the currency market and would have involved selling assets from a portfolio of official reserves that were valued at around $1.29 trillion at the end of August. 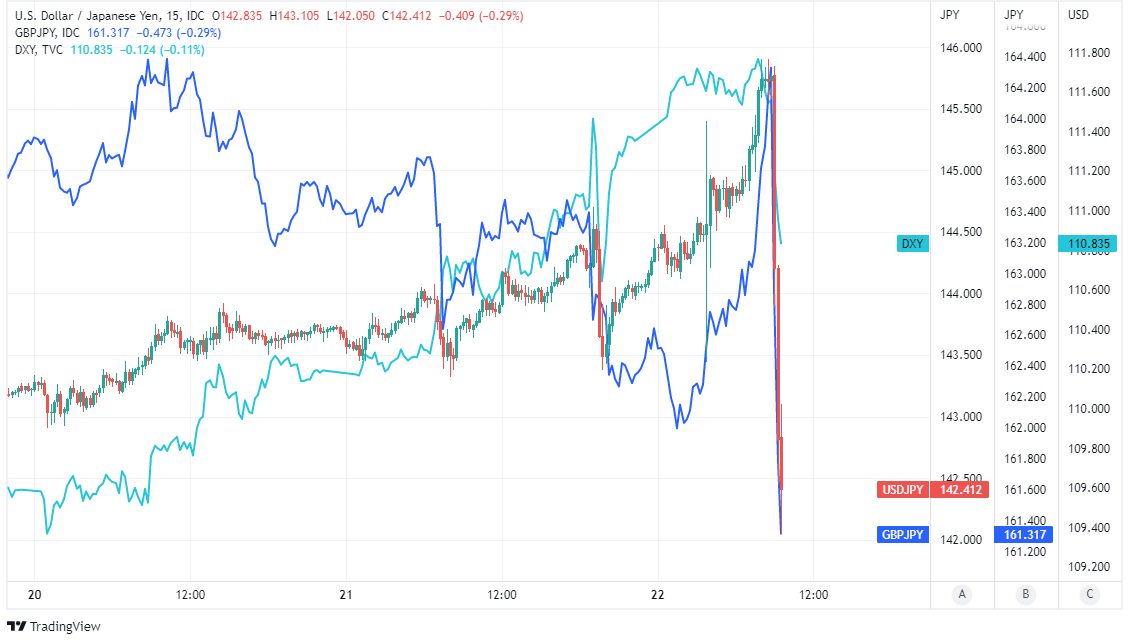 Above: USD/JPY shown at 15-minute intervals alongside GBP/JPY and U.S. Dollar Index.

Although increases were mostly felt in Japanese exchange rates, many other currencies were seen rising against the Dollar in the wake of the reports, while the U.S. Dollar Index began to hand back earlier gains that had arisen in the wake of September's Federal Reserve policy decision.

"With inflation pressures in the US close to peaking and the economy slowing, we think expected interest rates in the US are unlikely to rise much further. This suggests downward pressure on the yen will start to abate before too long: yen intervention may buy enough time to keep the USD/JPY rate from rising above today’s peak," Capital Economics' Goltermann said on Thursday.

Previously, Bank of Japan policymakers voted to leave the local cash rate unchanged at -0.1% on Thursday while also electing to retain the 10-year government bond yield target of 0% with an upper limit of 0.25%.

To enforce the yield target the BoJ said it would continue to buy whatever amounts of government bonds are necessary through daily market operations unless it seems likely that no bids would be submitted at such auctions.

"A rate hike was explicitly ruled out for the time being, along with a reiteration of the BoJ’s commitment to keep policy easy until inflation was above the 2% target in a sustainable manner. Sustainable is the key here; inflation hit 3% in August, but was driven by energy, food, base effects, and yen weakness, all of which are viewed by the BoJ as transitory shocks," says Craig Botham, chief Asia Pacific economist at Pantheon Macroeconomics. 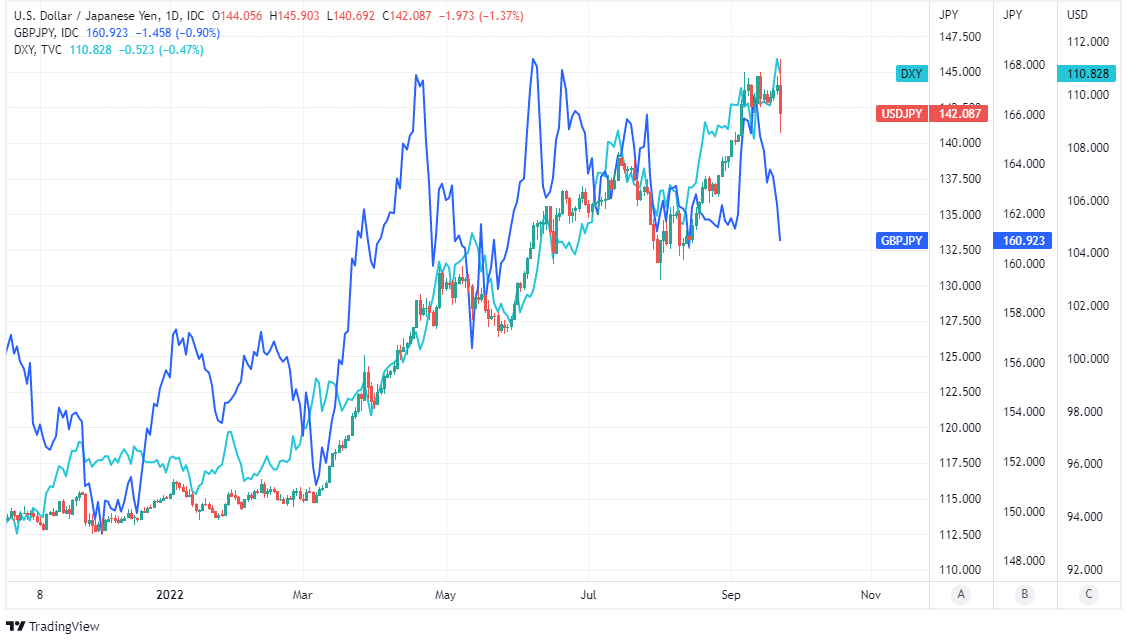 Above: USD/JPY shown at daily intervals alongside GBP/JPY and U.S. Dollar Index.

Underlying the decision was the BoJ's view that recent increases in Japanese inflation rates are likely to prove temporary and the assumption that it could take a while longer for the bank to be able to sustainably meet its 2% inflation target.

"The Bank of Japan has made it clear that it will stick with its ultra low monetary policy until inflation stays at around 2% in a more sustained fashion," says Min Joo Kang, a senior economist for South Korea and Japan at ING.

This monetary policy has, however, resulted in widening interest rate differentials and a further burden for a currency that has also been weighed down heavily by large increases in the cost of energy imports resulting from G7 economy efforts to move away from Russian supplies of oil and gas.

The Japanese Yen remained some -18.27% lower against the U.S. Dollar for 2022 even after Thursday's intervention and had also fallen by double-digit percentages against a number of other G10 and G20 currencies.

"This year's yen weakness is not the product of BoJ QE or Fed rate hikes. This year's yen weakness is mostly about Japan barely running a current account surplus that is not sufficient to cover its typical 1-2% of GDP worth of net FDI [foreign direct investment] outflows. That flow gap probably isn't going away unless/until Brent crude drops below $70," writes Greg Anderson, global head of FX strategy at BMO Capital Markets, in a recent research briefing. 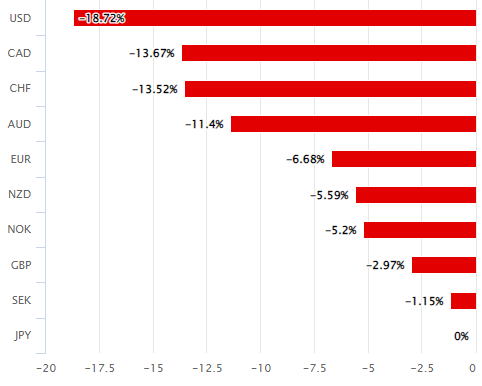 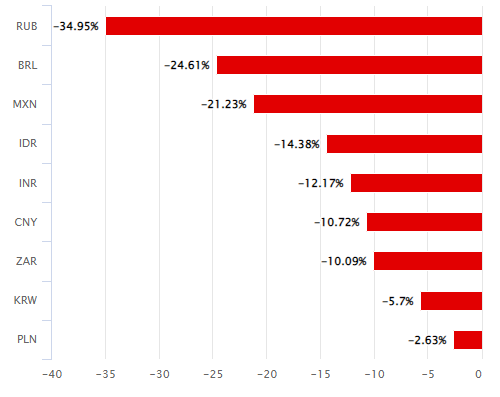