The Japanese Yen fell to another new millenium low on Thursday after the Bank of Japan (BoJ) elected to continue with a longstanding set of monetary policies and as the Dollar strengthened following September's interest rate decision and forecast update from the Federal Reserve (Fed).

Bank of Japan policymakers voted to leave the local cash rate unchanged at -0.1% on Thursday while also electing to retain the 10-year government bond yield target of 0% with an upper limit of 0.25%.

To enforce the yield target the BoJ said it would continue to buy whatever amounts of government bonds are necessary through daily market operations unless it seems likely that no bids would be submitted at such auctions.

"Japan's economy is likely to recover, with the impact of COVID-19 and supply-side constraints waning, although it is expected to be under downward pressure stemming from a rise in commodity prices due to factors such as the situation surrounding Ukraine. Thereafter, as a virtuous cycle from income to spending intensifies gradually, Japan's economy is projected to continue growing at a pace above its potential growth rate," the BoJ said in its statement.

"The CPI (all items less fresh food) is likely to increase toward the end of this year due to rises in prices of such items as energy, food, and durable goods. Thereafter, the rate of increase is expected to decelerate because the contribution of such price rises to the CPI is likely to wane," it added. 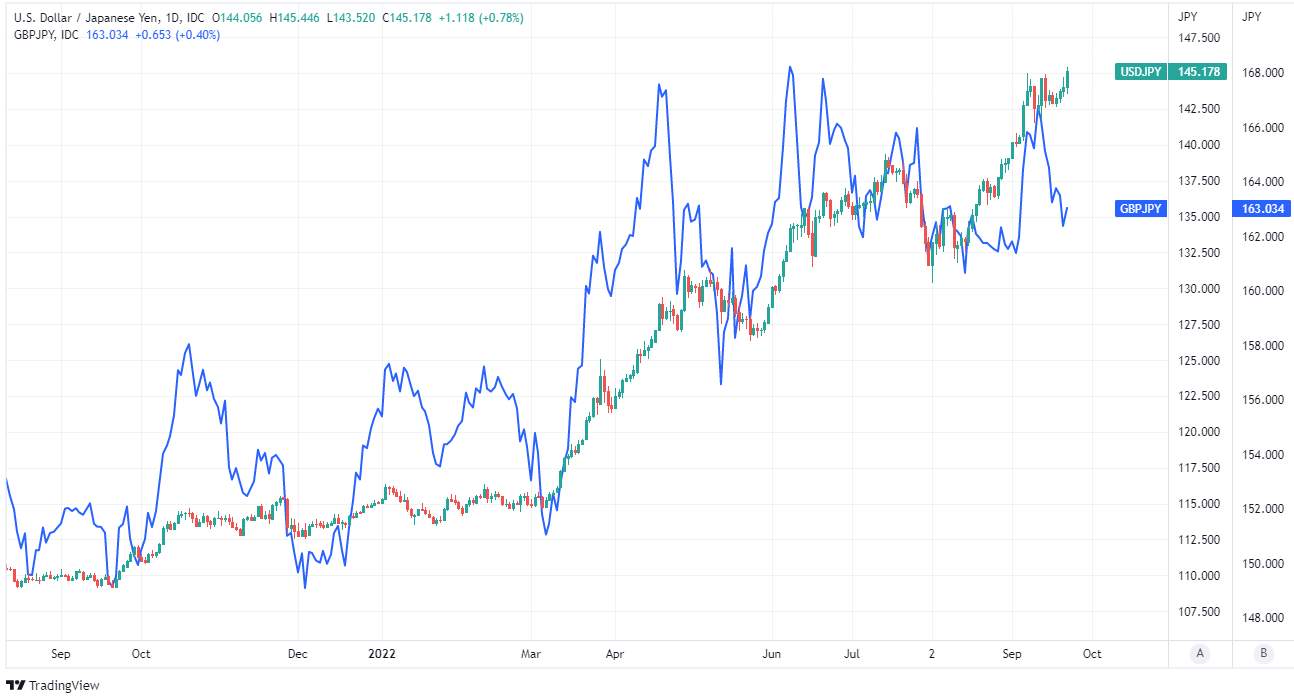 BoJ policymakers have viewed recent increases in inflation as likely to prove temporary and so have not followed other central banks around the world by lifting interest rates this year, which is one of several recent developments that has come at a cost to the Yen.

"In this situation, it is necessary to pay due attention to developments in financial and foreign exchange markets and their impact on Japan's economic activity and prices," the BoJ said on Thursday.

Widening interest rate differentials are a further burden for a currency already weighed down heavily by large increases in the cost of energy imports resulting from G7 economy efforts to move away from Russian supplies of oil and gas.

"The Bank of Japan (BoJ) left its ultra-expansionary monetary policy unchanged. As a result, the yen depreciated. Clearly some on the FX market had expected that in view of the rampant yen-weakness the BoJ would at least send out cautious signals of monetary tightening. They were disappointed," says Esther Reichelt, an analyst at Commerzbank.

"As long as the monetary policy divide between Japan and the rest of the world remains in place a weaker yen remains fundamentally justified, and the motivation for other central banks to make concerted interventions is likely to remain low," Reichelt said in a Thursday market commentary.

Thursday's decision and the Japanese Yen's latest decline came hard on the heels of September's Federal Reserve monetary policy decision in which the U.S. Fed Funds interest rate was lifted by three quarters of a percentage point for a third consecutive occasion. 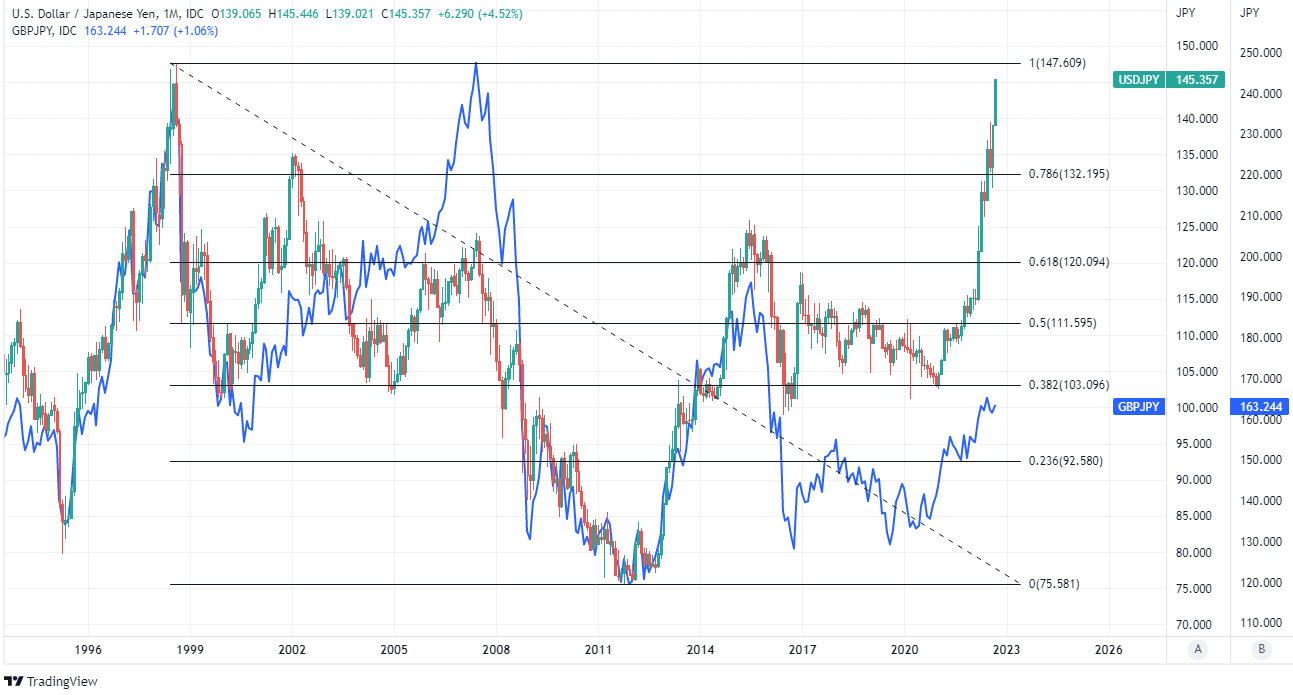 Above: USD/JPY at monthly intervals with Fibonacci retracements of 1998 downtrend indicating possible areas of technical resistance and shown alongside GBP/JPY. Click image for more detailed inspection.

Federal Open Market Committee members voted unanimously to raise the Fed Funds interest rate range by 0.75% to between 3% and 3.25% on Wednesday and lifted their  quarterly projections for borrowing costs at year-end by one percentage in response to the latest U.S. inflation developments.

"I want to start here today by saying that my main message has not changed at all since Jackson Hole. The FOMC strongly committed to getting inflation down to 2% and we will keep at it until the job is done," Fed Chairman Jerome Powell told reporters early in the press conference.

FOMC projections for inflation were raised across the board and the core measure of Personal Consumption Expenditures (PCE) inflation, which is the most important measure targeted by the Fed, was projected to sit one tenth of a percentage point above the 2% target all the way out in 2025

Prices in the Federal Funds Rate futures market shifted higher to sit around 4.56% for the September 2023 month, leaving market pricing broadly in line with the outlook set out in Wednesday's forecasts. 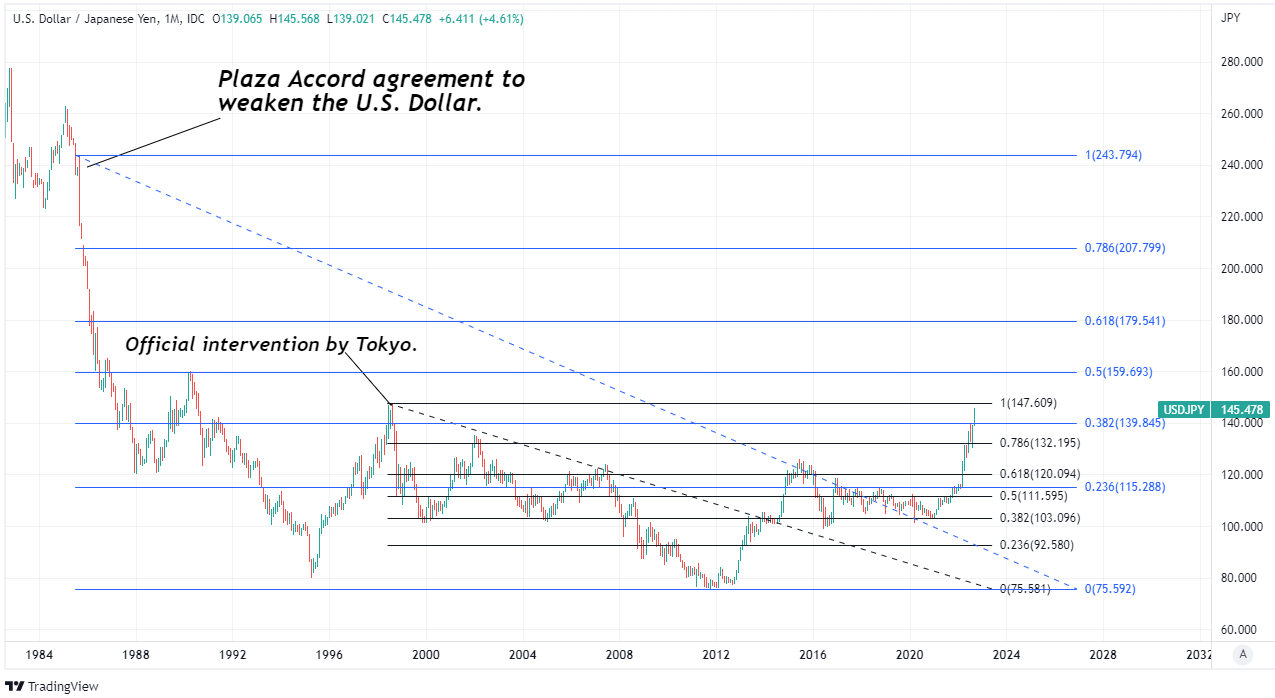 Above: USD/JPY at monthly intervals with Fibonacci retracements of 1985 and 1998 downtrends indicating possible areas of technical resistance. Click image for more detailed inspection.