The Pound to Rand rate eased lower in the opening session of the new week and could be set to remain sidelined beneath its early May highs as the South African currency benefits from a supportive central bank policy outlook, a softening of the U.S. Dollar and a partial rebound by the Renminbi.

Sterling was one of the better performing G10 currencies on Monday but was unable to avoid ceding further modest ground to the South African Rand, which outperformed with both domestic and international tailwinds in its sails.

South Africa’s Rand outperformed most of its G20 counterparts barring the Brazilian Real on Monday as the Dollar slipped further from recent highs and the Renminbi lifted off its early May lows, marking a further partial reversal or neutralisation of two recent and sizable headwinds for the currency.

But the Rand also benefited from domestic tailwinds including an improved outlook for the government credit rating awarded by S&P Global Ratings, which was lifted from neutral to positive after the market closed on Friday.

“This indicates that the next move from S&P for South Africa will be a credit ratings upgrade if factors do not deteriorate, although the agency has about a year to make the decision, and can remove the positive outlook if factors do not improve,” says Annabel Bishop, chief economist at Investec. 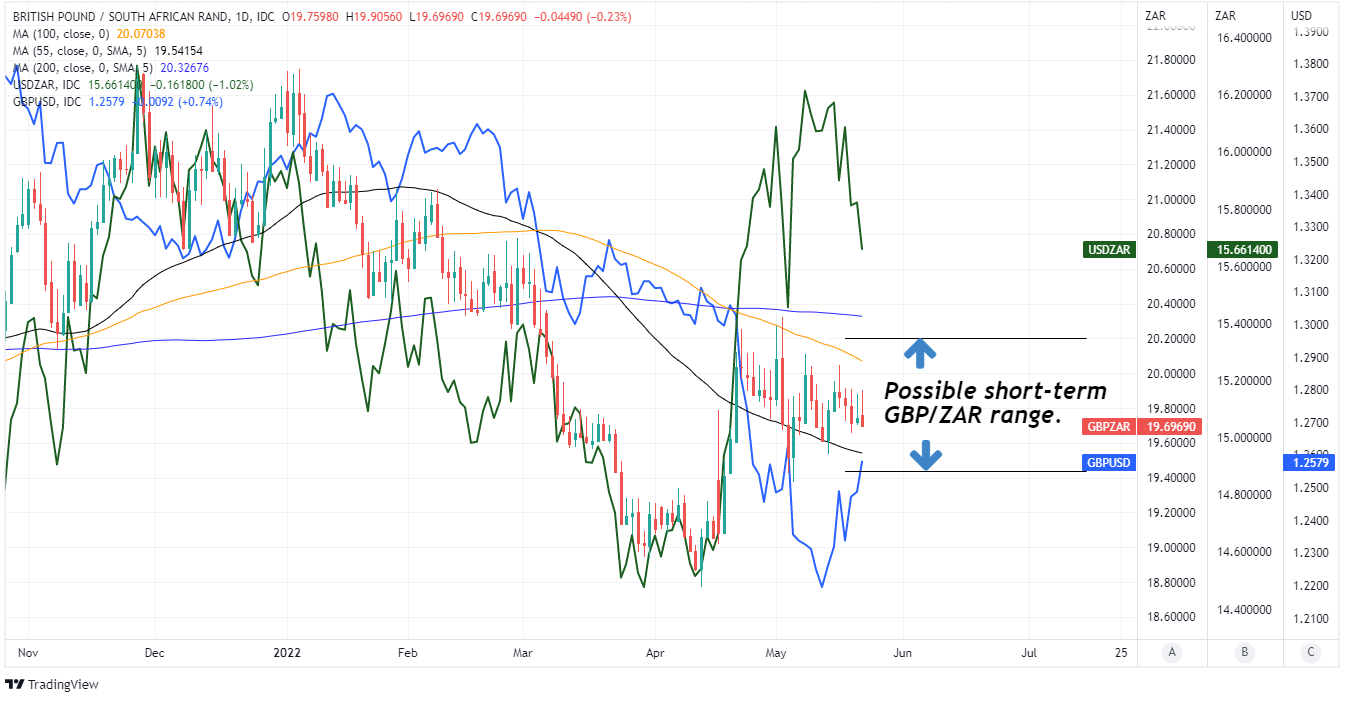 Above: Pound to Rand exchange rate shown alongside GBP/USD, USD/ZAR and selected moving-averages.

While South Africa’s ratings for foreign and local currency debt were left unchanged at 'BB-/B' and 'BB/B' respectively, the upgraded outlook is suggestive of a possible inflection point for the country’s perceived, which is potentially a favourable outcome for Rand denominated assets.

“Faster implementation of economic reforms, accompanied by fiscal consolidation to provide a stable foundation for growth, will support a faster recovery and higher levels of economic growth over the long term,” National Treasury said in response to the announcement.

The Rand’s subsequent advance helped pull the USD/ZAR exchange rate back in the direction of its May low around 15.40 on Monday, reinforcing the fall below 16.00 that followed last Thursday’s South African Reserve Bank (SARB) decision to lift its cash rate by 50 basis points to 4.75%.

The SARB also lifted its assumptions last Thursday of how much further it could need to raise borrowing costs over the next 18-months in order to ensure that South African inflation rates remain within the three-to-six percent target band, which may also be supporting the Rand.

“The rand continues to trade in positive territory after SARB’s rate hike,” says Walter de Wet, a currency and bond strategist at Nedbank. 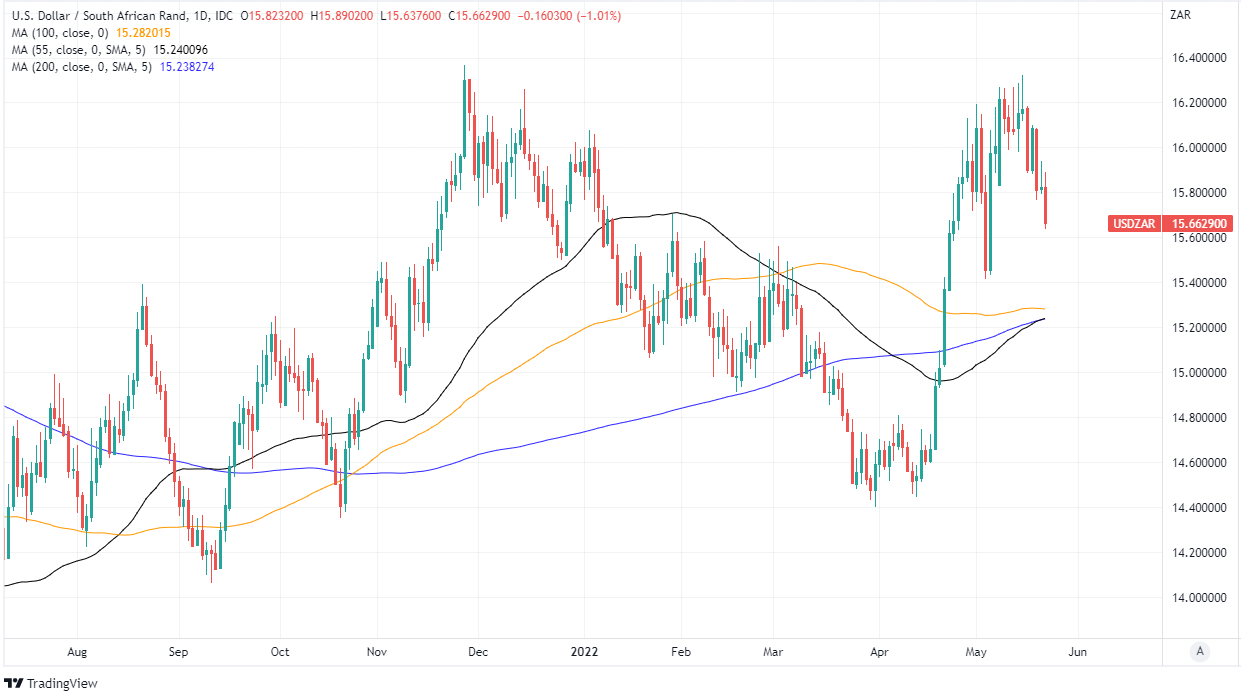 Above: USD/ZAR shown at daily intervals with selected moving-averages.

“The next technical support is around the 15,6000 level. Locally, KZN is again experiencing extreme weather conditions that are likely to further damage infrastructure,” de Wet and colleagues said on Monday.

The Pound to Rand exchange rate has remained subdued within a range spanning the gap between roughly 19.40 and a little over 20.20 since early April and has been under pressure within that range since the U.S. Dollar began to correct lower early last week.

That corrective pressure has been reinforced by a partial recovery of the Renminbi from its April losses, a recovery that has built as Shanghai commences a phased reopening from ‘lockdown’ and one that was buttressed last Friday but cuts to mortgage-linked interest rates in China.

All of this is positive for South Africa’s largest trade partner economy and could remain a source of support for the Rand over the coming days, implying little - if any - upside for the Pound to Rand exchange rate.

“This week, we will monitor to see if the ZAR can maintain its hold on the gains from last week. There is minimal significant data from South Africa this week, so we anticipate global factors to be the main catalyst for movements in the ZAR,” says Tim Powell, a director of forex at Sable International.