The Pound to Rand exchange rate has attempted to further its April rebound in recent trading but could struggle for upward momentum on any recovery above 20.00 and would be at risk of sliding back toward 19.45 in days ahead as and when the USD/ZAR pair eases further from its latest highs.

South Africa’s Rand was among the biggest fallers within the G20 club of currencies during the week to Tuesday after being outpaced by only Pound Sterling and the Brazilian Real in a race to the bottom that came alongside significant losses and volatility for risky assets across the globe.

Sterling’s sharp declines in the wake of last week’s Bank of England (BoE) policy decision were instrumental in reining in the Pound to Rand rate as stock markets, commodity prices and risky currencies came under pressure.

“Deteriorating risk sentiment and high US Treasury yields together with a strong $ continue to weigh on the Rand,” writes Yuliya Kryzhanovska, a currency trader at Credit Suisse, in a market commentary from the bank’s trading desk. 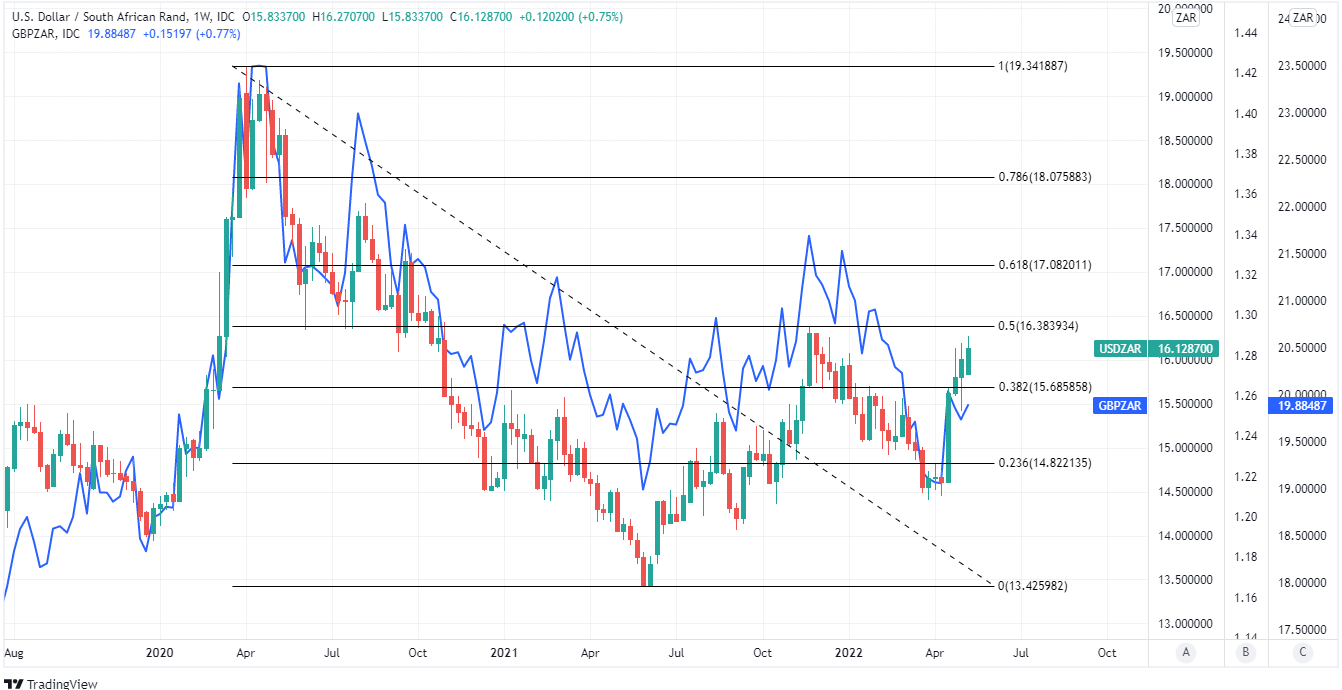 Above: USD/ZAR at weekly intervals with Fibonacci retracements of March 2020 fall indicating possible areas of technical resistance for the Dollar support for the Rand. Shown alongside GBP/ZAR rate. Click image for closer inspection.

“Over the past few sessions we have been trading USD/ZAR from a short side, trying to profit on $ retracements. That said, the underlying strong $ momentum remains intact. We need a catalyst to see a reversal of this trend. I don’t have a strong conviction here,” Kryzhanovska also said Monday.

Market concerns about the deteriorating economic backdrop in China were prominent drivers of strength in the U.S. Dollar and losses for global stock markets early in the new week, although the greenback is also benefiting from the elevated level of American bond yields too.

New coronavirus containment measures are hastening an earlier economic slowdown in China and have recently placed pressure on the Renminbi as well as correlated currencies, although the humanitarian and global economic tolls of high energy and food costs have also been widely cited.

All of these factors helped to lift the USD/ZAR exchange rate sharply during the week to Tuesday, although the weakened state of the main Sterling exchange rate GBP/USD has so far prevented the Pound to Rand exchange rate from keeping pace with USD/ZAR. 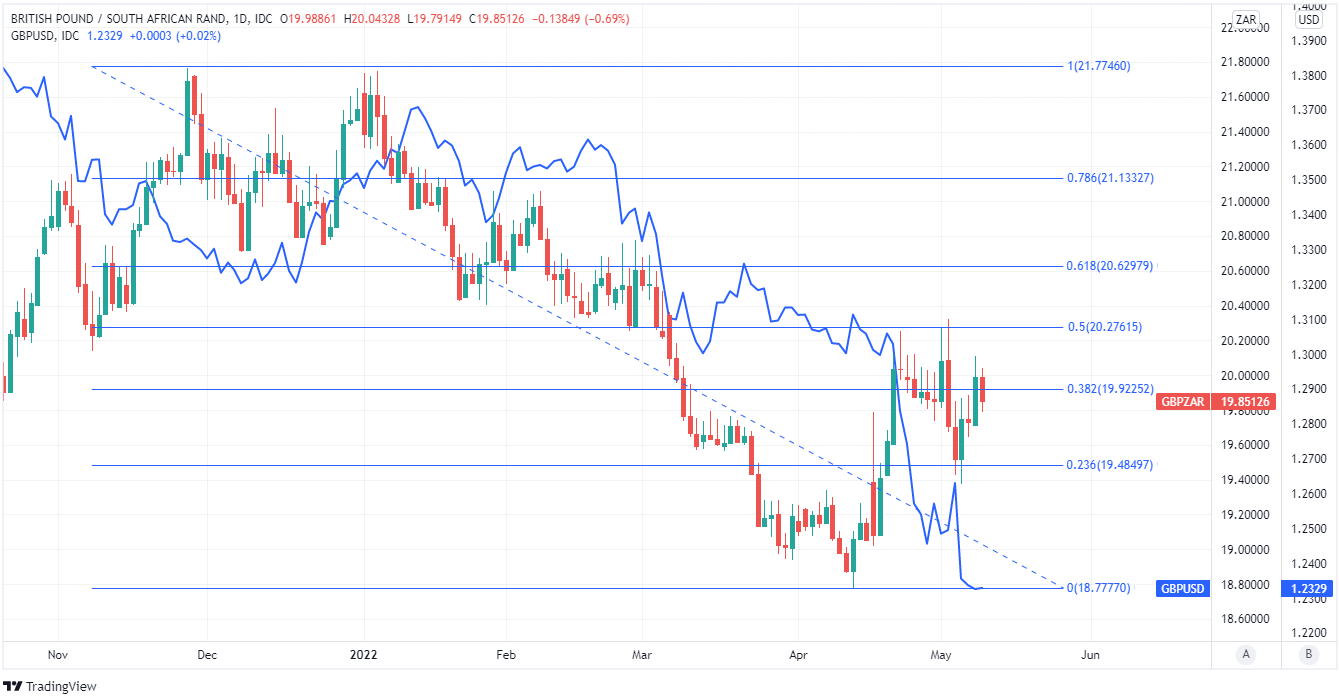 Above: GBP/ZAR shown at daily intervals with Fibonacci retracements of 2022 fall indicating likely areas of technical resistance for Sterling and support for the Rand. Shown alongside GBP/USD. Click image for closer inspection.

“Foreigners are substantial sellers of EM portfolio assets, particularly China, and this has caught up with the rand too over April. Commodity prices fell over April, also subduing the rand, particularly for metals prices,” says Annabel Bishop, chief economist at Investec.

“The April floods in KZN will also have damaged the currency’s performance as it hit exports in that province, and in general foreign investors sentiment towards SA has been dulling. The rand has disassociated from the strong EM currencies’ pack it was in earlier in the year,” Bishop also said on Monday.

The BoE’s latest economic forecasts and assumptions have potentially adverse implications for the UK interest rate outlook and so have weighed heavily on Sterling in recent trading in what is a bearish omen for the Pound to Rand exchange rate as and when the USD/ZAR pair corrects lower.

GBP/ZAR always tends to closely reflect the relative performance of Sterling and the Rand when each is measured against the Dollar and would struggle to avert a decline back to its early May lows around 19.45 in the short-term in the absence of a significant and possibly unlikely rebound by GBP/USD. 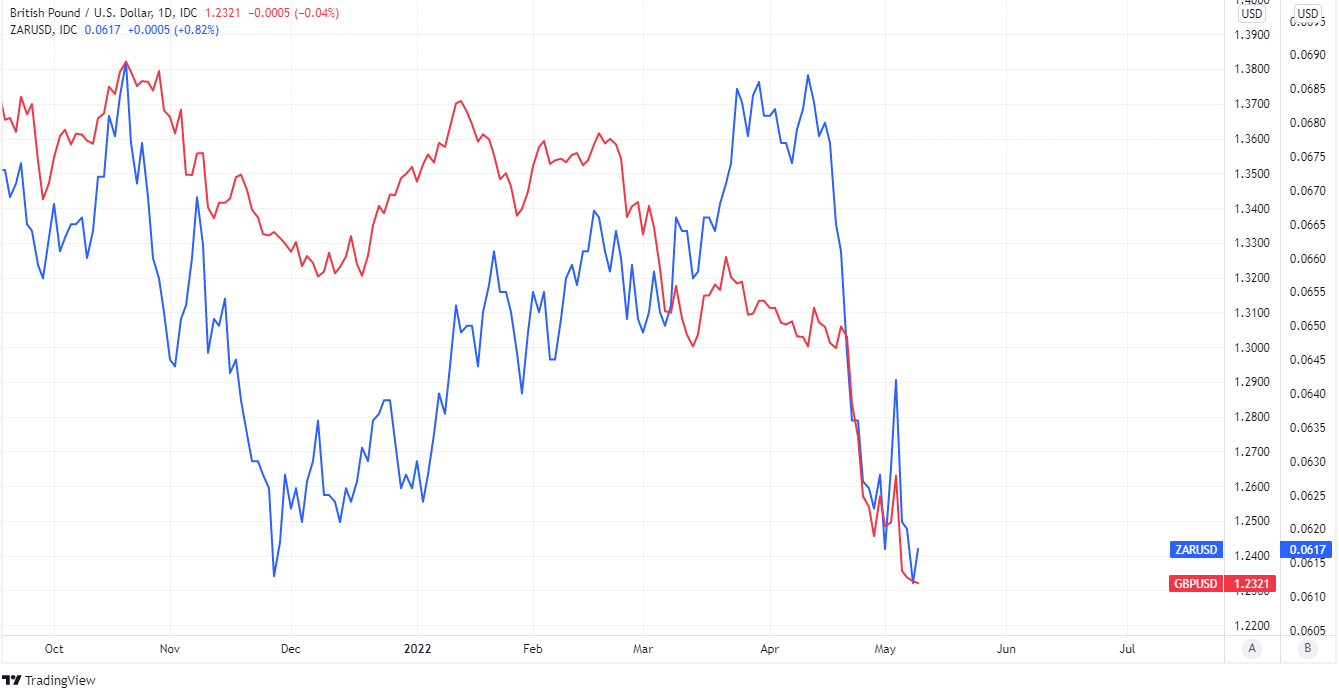 “With South Africa still facing loadshedding and declines in the gold price, the ZAR is under extreme pressure after months of strength. This move to the upside is coupled with the “risk-off” shift that we are currently seeing in the global market,” says Tim Powell, a director of forex at Sable International.

“The only major data event this week is the mining production for March, which is expected to increase due to the jump in metals prices during this period. Analysts will also watch to see if the ZAR continues its weakening trend, and how far it might run,” Powell said on Monday.

There is little in the South African economic calendar to guide the Rand through the remainder of the week until Thursday’s flurry of production figures from the mining and manufacturing sectors, although all currencies will likely be sensitive to the outcome of Wednesday’s U.S. inflation figures.

Wednesday’s data would be an upside risk for USD/ZAR if the April numbers surprise significantly on the upside of market expectations given that signs of a top or peak in the U.S. inflation cycle is crucial for keeping the Federal Reserve (Fed) from an even more aggressive uplift in U.S. interest rates.