- Comments by Fed speakers fuel rally in the Rand.

- Not out of the woods as U.S.-China outlook fragile.

The Rand swept higher across the board Thursday in response to international developments but local analysts have said the South African currency is not out of the proverbial woods yet because domestic as well an international factors could still blight it in the days and weeks ahead.

South Africa's Rand moved sharply higher against major currencies in the European morning hours Thursday and again in the noon session, although both increases coincided with headlines on the international side. China was reported in the morning hours to be removing restrictions on imports of U.S. poultry while in the noon hours Federal Reserve (Fed) policymakers sang the praises of the U.S. economy but otherwise suggested neither the prospect for interest rates cuts nor hikes up ahead.

Fed Chairman Jerome Powell told Congress in his second day of testimony the bank's current on-hold policy stance is "likely to remain appropriate” as long as the economy grows moderately and the labor market remains strong. This came after Vice Chair Richard Clarida lamented low inflation expectations in an address to the Cato Institute's Annual Monetary Conference before advocating a less stringent approach to interpreting the inflation mandate.

"This does not mean that the global economy is no longer at risk of recession, or indeed that it is not experiencing further slowdown, nor does it mean that the US led trade feud, and its effects, are at an end. Recent Chinese retail sales and manufacturing output was weaker than expected, indicating that broad based nature of the slowdown in the economy," cautions Annabel Bishop, chief economist at Investec. "The rand’s hiatus will prove to be short-lived if the synchronised global economic slowdown accelerates, or indeed persists." 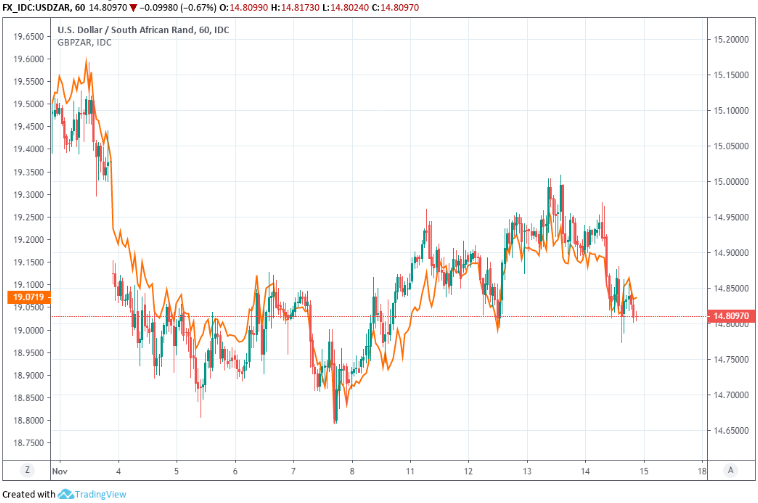 Powell previously described U.S. inflation as "muted" on Wednesday and said the growth outlook was favourable. Neither of the Fed's two most senior policymakers see any case for either a rate cut or a hike in the short-term, which is no bad thing for emerging market currencies especially if stability helps foster a global economic recovery. The Fed has cut rates three times in 2019 and has hinted repeatedly that it doesn't intend to cut them any further.

China's decision to drop its long-standing ban on U.S. poultry imports was seen by the market as being relevant to the talks between it and the White House. But the October 11 'phase one deal' no longer seems to be the sure thing it was billed as by President Donald Trump, who this week adopted a less optimistic and more aggressive tone on discussions aimed at formalising the pact.

"News broke shortly after 10:00 GMT suggesting that China would be lifting restrictions on imports of US poultry products, so this should put a floor underneath US yields until we see if there is any movement from the US side," says Stephen Gallo, European head of FX strategy at BMO Capital Markets. "The combination of lower US yields and upside surprises in Eurozone data have prevented a more convincing move in EURUSD below 1.1000, and we are still patiently waiting for a short entry point in this pair. EUR-USD rate differentials will become more important over the next 24 hours or so, especially with US retail sales data on the horizon."

The decision by China comes as the world's second largest economy, and biggest consumer of pork, battles against a deadly version of Swine Flu that has thoroughly disrupted its supply of that meat.

It also follows a Wall Street Journal report from Wednesday that suggested those talks have all but stalled as China again appears to backtrack on commitments that were once said to have been agreed. 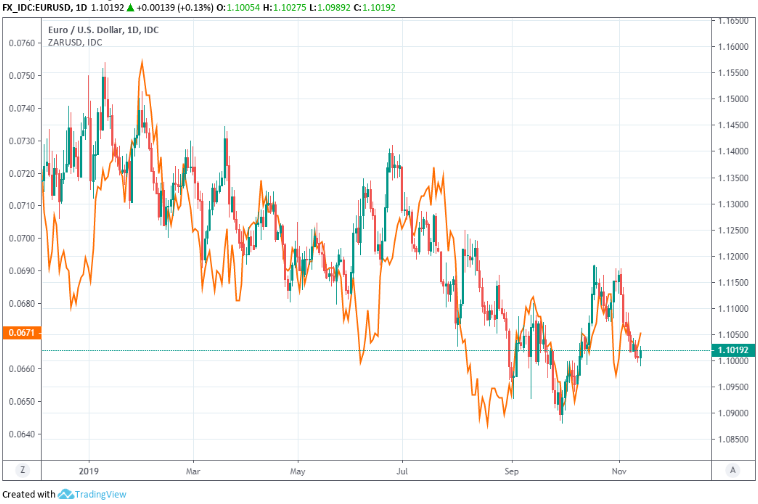 In short, the trade talks still appeared Thursday to be in danger of falling apart before even the purported 'phase one deal' is committed to writing and formally entered into, which could mean more pressure on the Euro-Dollar rate and a broader greenback recovery is around the corner. The Euro-to-Dollar rate is an effective proxy for the broad U.S. greenback as well as an important and positively correlated influence on the Rand.

"Retail sales have effectively remained flat during the third quarter, further signalling that SA’s third-quarter growth is likely to be lacklustre," says Siobhan Redford, an economist at Rand Merchant Bank. "And in other news, plans to travel this weekend may have to change – especially if your mode of transport is an SAA flight. There is a planned strike on both Friday and Saturday, in response to the announced restructuring of SA’s state airline."

Redford says trade talks and geopolitics remain the biggest drivers of emerging market asset prices but has flagged to clients the fragile state of the domestic economy in the recent quarter as well as the government's latest headache in its effort to address the burden of ailing, over-indebted and often insolvent state-owned-enterprises (SOE) as also warranting attention.

President Cyril Ramaphosa and his government are working against the clock to put South Africa's various SOEs on a sustainable footing and in a manner that reduces their burden on the public purse, but doing this to the extent necessary to satisfy Moody's and other less relevant rating agencies is a tall order and a task at which the government has so-far failed. 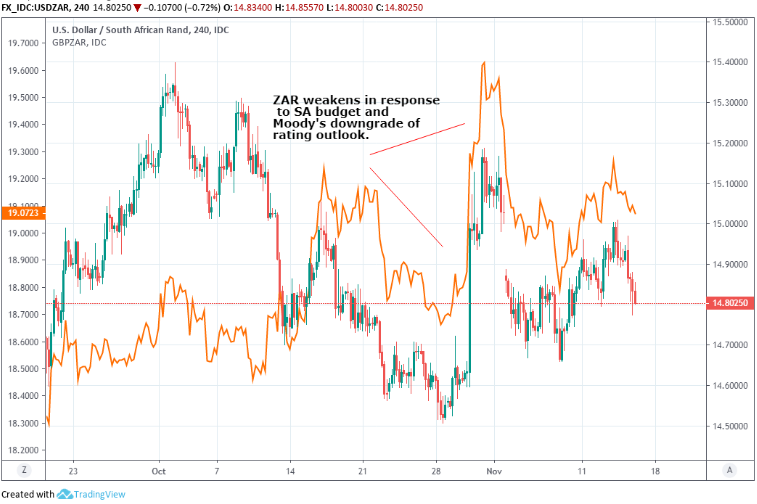 "The rand appreciated in October on the back of a more relaxed situation in the US-China trade conflict and improved risk sentiment. However, the risks from this side remain. In addition, a now negative rating outlook is a strain. This speaks for continued increased volatility in the ZAR exchange rates," says Elisabeth Andreae, an analyst at Commerzbank.

South African Airways, the national flag carrier responsible for much local travel and arguably the second most problematic SOE, was preparing Thursday for what the National Union of Metalworkers and the SA Cabin Crew Association are billing as an 'indefinite strike' over worker wage packets and job cuts. This risks drawing fresh scrutiny from Moody's and other rating agencies.

Strikes at the national flag carrier will play out against a backdrop of frequent rolling blackouts wrought on the country and economy by Eskom, the national electricity monopoly that's no longer able to service its mammoth debt pile with the revenues it collects from South African households and businesses. The taxpayer is on the hook for R350 bn of Eskom's debt but is itself owed bucket-loads of cash by municipalities, government departments and private citizens.

"The recovery will only gain momentum once the government moves ahead with the restructuring of highly indebted state-owned companies. The sticking points include, on the one hand, the reduction of debt and employment in the public electricity supplier, and, on the other hand, the safeguarding and modernisation of power supply," Andreae says "The government seems stuck in the announcement mode. While the ANC has agreed to use the proposals presented by the Ministry of Finance at the end of August...concrete action was repeatedly postponed due to resistance." 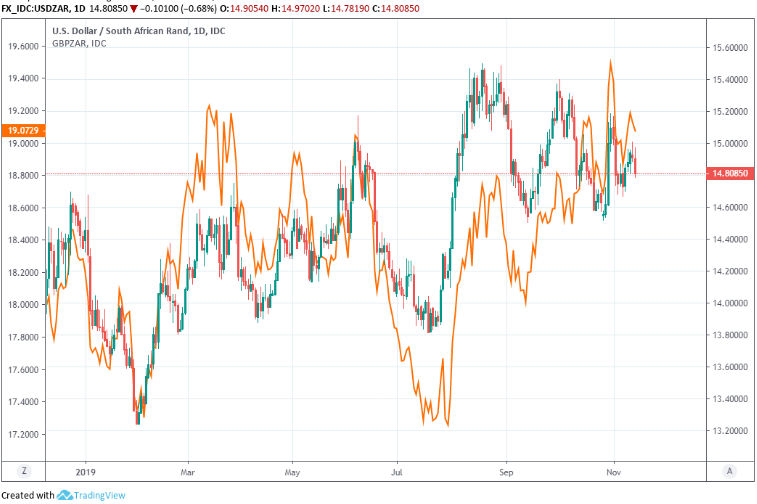 Deputy President David Mabuza said in September that municipalities owed some R165.5bn in unpaid bills to SOEs as of June 30 while Eskom has said that 70% of its bills to municipalities go unpaid. But the problems at Eskom are bigger than non-payment because after years of alleged-corruption, underinvestment and waste the company can no longer generate the power it would need to sell in order to be viable on its own feet.

The national grid is under such pressure that rolling nationwide blackouts have at times been Eskom's only way of avoiding a complete meltdown. And simply investing more is not an option because the government has bailed out its SOEs many times before and Moody's this month cut the outlook on South Africa's remaining 'investment grade' rating to negative, meaning a downgrade to 'junk' could follow as soon as February 2020.

Moody's says lower projected-budget deficits - which require either more tax revenues or less planned expenditure - are the price of its confidence that South Africa's debt is on a sustainable trajectory. And without said confidence, a downgrade that risks forcing some investors out of the country is just a matter of time. Any downgrade would be bad for the Rand.

"We assume that South Africa can hold the rating for the time being. This is likely to provide the ZAR some recovery potential in spring. Nevertheless, uncertainty in the run-up to budget presentation and rating review could contribute to increased rand volatility in the coming months. Moreover, negative domestic news is likely to exacerbate the downward pressure on the ZAR if global conditions deteriorate and risk-off sentiment prevails," Adreae warns.