- Headline inflation ticks up as core holds steady at 2.4%.

- Core inflation held back by rents but set to rise in 2020.

- USD index said to be vulnerable, as EUR bears sit and wait.

The Dollar built on earlier gains Wednesday after inflation figures surprised on the upside for the month of October and as investors eschewed risky prospects amid fresh unease over White House trade policy in the wake of President Donald Trump's speech to The Economic Club of New York.

U.S. inflation rose 0.4% last month when markets were looking for a 0.3% gain although the beat was marginal as it wasn't able to push the annualised rate any higher the 1.8% envisaged by the consensus and borne out in the official figures. Up from 1.7% last month, the 'headline' rate of inflation is now one step closer to the 2% target of the Federal Reserve (Fed) after having recovered from lows of 1.5% in the New Year.

"There does not appear to be material evidence of the consumer goods tariffs translating through to CPI at this point, which could be limited by the high weight of services in the CPI basket. Moreover, expectations for a slowdown in growth in Q4 to below potential suggests that there isn't much upside for core inflation in the near term. Given that the data aren't too far from consensus, market reaction should be limited," cautions Katherine Judge at CIBC Capital Markets. 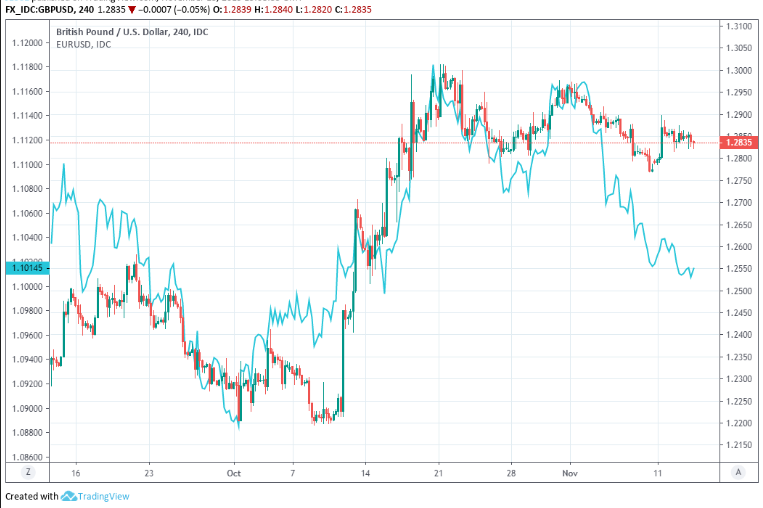 Core inflation, which is seen as a more reliable indicator of domestically generated inflation pressures, rose by 0.2% which was in line with expectations. This measure, which eliminates volatile energy items from the goods basket as well products which have regulated prices (tobacco and alcohol) that can distort underlying trends, remained at 2.4% for the year last month.

"This is a much more nuanced report than the unexciting 0.2% core print  - 0.157% to 3dp - suggests.  The core was held down by weak rents and an unexpected 1.8% drop in apparel prices, which are very noisy but in Oct subtracted 0.07% from the index," says Ian Shepherdson, chief economist at Pantheon Macroeconomics. "Our initial thought for Nov is that a solid 0.3% core increase is a decent bet, and we remain of the view that core CPI inflation is likely to climb gradually through the middle of next year, especially if the tariffs on consumer goods are not rolled back."

Shepherdson says U.S. rents rose at their slowest pace since 2013 last month and that this held back the core number. He's forecasting a continue increase in inflation through 2020, which could put the Fed in an awkward position because it recently cut interest rates three times in order to protect the domestic economy from the disinflationary threat that is the ongoing global growth slowdown. 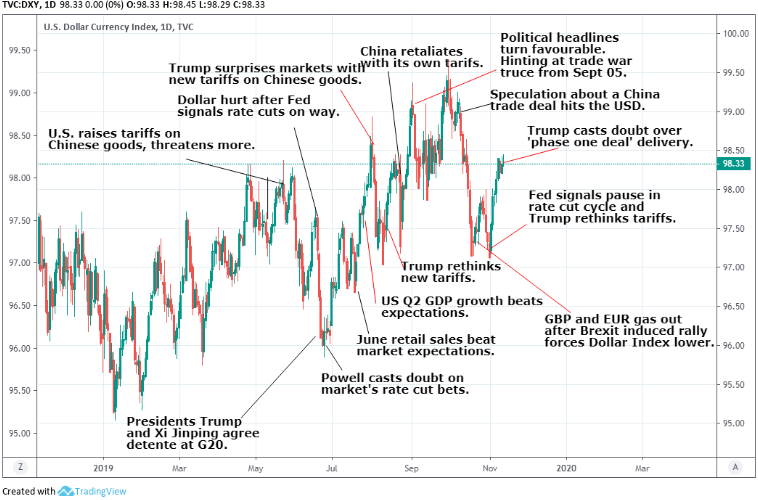 Above: Dollar Index shown at daily intervals and annotated for selected recent events. Click for larger image in new window.

The Fed, under pressure from the White House, has been proactive in lending support to the economy but it's rate cuts risk encouraging higher inflation that might ultimately force it into a u-turn at a later date. That, and unease in the market over White House trade policy, helped the Dollar beat most other major currencies including Pound Sterling into retreat on Wednesday.

The greenback remained on its front foot after Fed Chairman Jerome Powell told Congress inflation remains "muted" and the growth outlook is favourable.

"The Fed's rate path is less important than actual economic growth in the rest of the world when it comes to determining the outlook for the US dollar, according to panellists at the UBS European Conference. The long-term view of the dollar looks set to be slightly stronger with currencies in emerging markets those to particularly bet against," reports Tricia Wright, a UBS Knowledge Network editor.

The greenback was down against only the safe-haven Japanese Yen and Swiss Franc in the noon session Wednesday while, and crucially for the Dollar index, up against the Euro. But technical analysts at Commerzbank say the greenback's days in the sun will be limited in number up ahead because the Dollar index uptrend is being eroded. 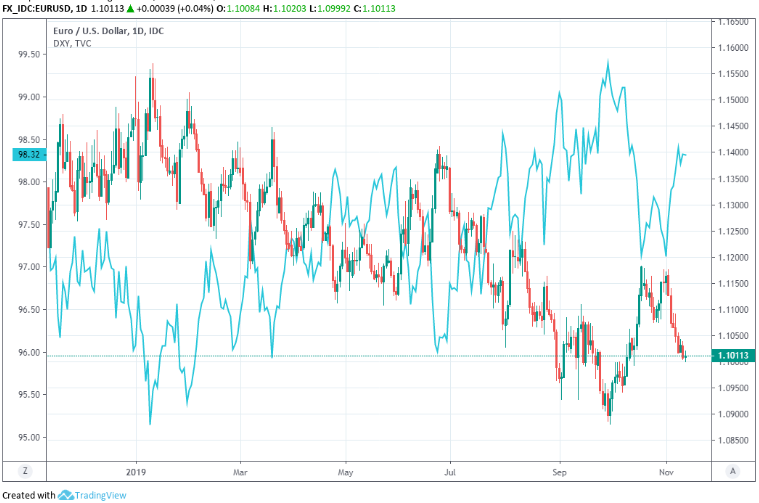 "The US Dollar Index has reached the 50% retracement at 98.40 and we look for signs of failure. Should slide back to the 97.16/14 recent lows...The Elliott wave count is suggesting failure around the 50% retracement at 98.40," says Karen Jones head of technical analysis at Commerzbank. "USD/CHF has reached its 6 month downtrend at .9976 and is expected to fail. USD/JPY is facing formidable resistance, namely the 55 and 200 week moving averages and the 2015-2019 downtrend at 110.79."

Europe's unified unit, which accounts for more than half the Dollar Index, always has a significant influence on the trajectory of the greenback and has been in retreat for almost a fortnight now after failing several times to overcome a key resistance barrier located around the 1.1180 level on the charts.

Jones, who studies trends and momentum on the charts, has become more cautious in her outlook for the single currency but long-term bears at BMO Capital Markets are reluctant to bet against the Euro at current levels.

"We are still comfortable waiting on EURUSD," says Stephen Gallo, European head of FX strategy at BMO. "Eurozone industrial production data for September - while nothing to cheer - could have been a lot worse, US data for this week have yet to flow through, and lower USD yields could also hinder weakness in the pair. We'd much rather look to sell the pair north of 1.1075. FX investors should be mindful of the fact that US yields could have further to fall if "risk-off" persists  and that this will weigh on the USD vs the JPY and other major currencies if and when it happens." 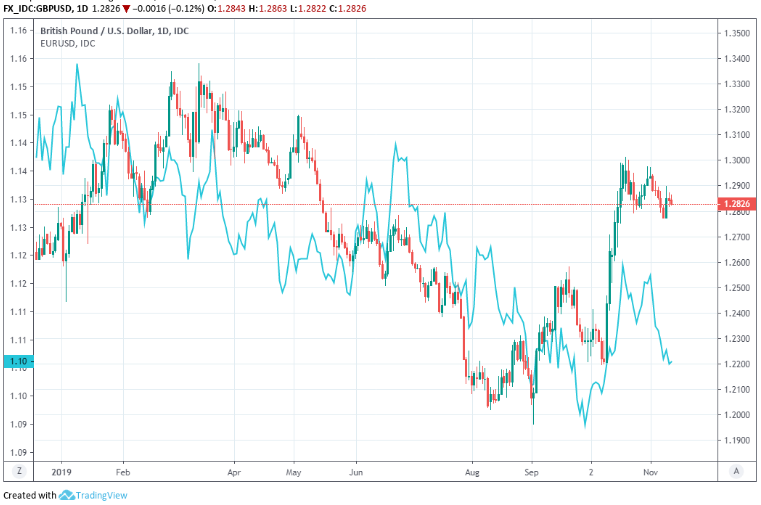 Patience among the Euro's critics might mean there's little downside left in the Euro-Dollar rate for the time being and only limited upside for the Dollar index but much is still to play for on those fronts and could to a significant extent, be determined by the next developments in White House trade policy. Any upward or downward move in the Euro-Dollar pair would either take the Pound-Dollar rate with it or risk a possibly-unwarranted adjustment in the EUR/GBP rate.

President Trump told The Economic Club of New York late Tuesday that "a significant phase one trade deal with China could happen" but then threatened that "If we don’t make a deal, we’re going to substantially raise those tariffs. They’re going to be raised very substantially."

There was speculation ahead of the address that Trump would announce a further delay of a decision on European car tariffs as well as provide an update on the China talks, but he actually tempered the market's optimism that an agreement to end the trade war will be reached at all.

Risk assets have recovered strongly in the last month on hopes of an end to the tariff fight between the world's two largest economies but markets were unable to avoid the fact Wednesday that White House language on the subject has changed for the worse since October 11 when the 'phase one deal' was first said to have been struck between Trump and China's Vice Premier Liu He.

Trump said on October 11 "we’ve come to a very substantial phase one deal" but since then he's increasingly said only that such a thing "could be reached". If there was an agreement last month there certainly wasn't by this week and on Wednesday, December 15 still marked the date on which tariffs are due to be imposed on all of China's remaining $550 bn odd of annual exports to the U.S.