The Rand ceded ground to a stabilising Dollar and Pound Friday but the outlook for the currency going forward has now been dented by a South African Reserve Bank (SARB) interest rate cut and the prospect of further easing to come, according to TD Securities.

South Africa's Rand was on its back foot Friday as the Dollar and other developed world currencies recovered their poise following the latest commentary on the U.S. interest rate outlook by the Federal Reserve (Fed) but it's SARB monetary policy that's hurt the outlook for Rand exchange rates.

The South African Reserve Bank cut its interest rate by 25 basis points to 6.5% Thursday and signalled that no further cuts are likely in the near future if its expectations for the domestic and international economies are born out in the coming months. That prompted a rise in the Rand, which is rare for any currency following a rate cut.

"The decision has left the rand stronger as the market was priced for nearly 50bps of easing ahead of the SARB announcement. This is in line with our prior expectations. However, ZAR looks a little too rich vs our forecasts now," says Cristian Maggio, head of emerging market strategy at TD Securities.

TD forecasts the USD/ZAR rate will climb to 14.35 by the end of September, which implies a fall in the Rand from Friday's levels, and that the Pound-to-Rand rate will rise to 18.53 from 17.41 Friday. By year-end the bank sees USD/ZAR back at 13.95 with the Pound-to-Rand rate dropping back to 18.13. However, the Toronto-headquartered lender is questioning whether the Rand could achieve such a performance following Thursday's rate cut, which risks eating away at the 'fundamental' value of the currency.

Governor Lesetja Kganyago says the SARB's forecast model had indicated that only one interest rate cut is necessary before the end of 2019, which all but rules out the additional cuts that financial markets have been hoping to see.

The SARB said Thursday that risks to the inflation outlook are "balanced" because the domestic economy is weak and wage growth is low, although the growth and inflation outlook could turn higher if advanced economies gather steam while prices could rise if the Rand weakens in response to market concerns over the nation's credit rating. 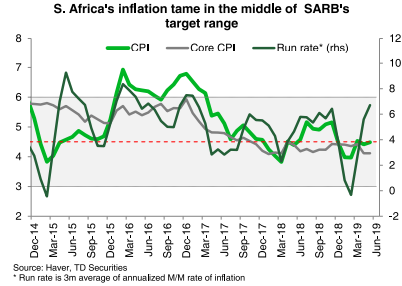 "We believe the recent strength of emerging market currencies will be overshadowed in the medium term by a gloomier world economic outlook, a resurfacing US China trade war and resulting negative sentiment towards emerging markets," says Michael Every, a strategist at Rabobank.

TD and Rabobank are not alone in having doubts about the outlook for the Rand because analysts at Morgan Stanley cut their rating for the currency from "outperform" to "neutral", citing a strong recent performance and concerns over the outlook for the public finances.

"Interestingly this week, both KRW and ZAR appreciated following rate cuts from their local central bank," says Hans Redeker, head of FX strategy at Morgan Stanley. "The dovish Fed opened the door for high-yielding EM currencies to outperform. However, the fiscal trajectory of South Africa is looking more worrisome, and although we think FX is more attractive than local bonds, we are no longer sure ZAR can outperform. We switch ZAR back to neutral after a strong run in the past month."

South Africa's government is under pressure from Moody's to reduce its budget deficit and national debt pile, or face losing its 'investment grade' credit rating. Losing the Moody's rating would risk driving the Rand into the ground.

A Moody's cut would see many international investors, particularly those who benchmark to the Citi World Government Bond index, automatically forced into selling their government bonds which would then see investors seek to swap capital back into their domestic currencies.

"The growth recovery in South Africa has been disappointing, while the scale of the reform challenges facing the South African government is considerable," Redeker says. "Our economics team sees a significantly wider fiscal deficit relative to that forecast by the South African Treasury and also Moody's, and a very subdued growth forecast of 0.4% in 2019 and just 1.3% in 2020."

South Africa had a rough start to the year that saw the economy contract in the first quarter. The SARB downgraded its forecast for 2019 GDP growth Thursday but still projects a pick-up in 2020 and beyond. Nonetheless, this weak economic performance risks increasing government spending and the debt-to-GDP ratio, which would be negative for the outlook on the credit rating.

Morgan Stanley has cut its forecasts for the Rand as result of concerns about the rating. It now projects a USD/ZAR rate of 13.6 at the end of September, down from 14.0, but has raised its year-end target from 13.2 to 14.2. The Pound-to-Rand rate is expected to fall to 16.87 by the end of September before rising to 18.03 by year-end.