- Budget deficit to rise sharply before stabilising at lower base in 2022.

- Eskom to be broken up and part-privatised in crucial rescue strategy.

The Rand was volatile Wednesday after Finance Minister Tito Mboweni unveiled the government's latest budget and as markets sought to gauge if its proposals for the public finances will be enough to save the nation's top credit rating.

"The 2019/20 budget has been the toughest balancing act in the post democracy era. This budget is contractionary, with real cuts to spending compensating for a rise in funding for the crisis‐ridden Eskom, and nothing in the way of tax relief. What is desperately needed is stronger economic growth," says Dennis Dykes, an economist at Nedbank. 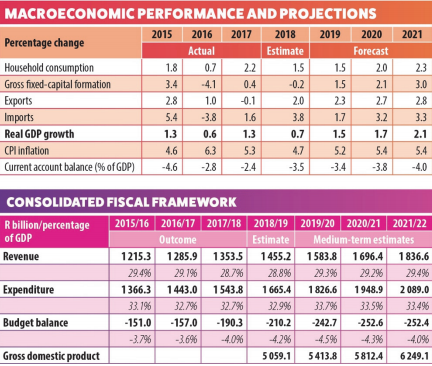 South Africa's budget deficit does not stablise until the end of the forecast period in 2022 and is expected to level-off at 4% of GDP, the above figures show. However, that end point is lower than the 4.2% projection from October.

The fact that South Africa's budgetary black hole is now expected to be smaller in 2022 than was projected back in October, despite a much higher deficit for the current year, could explain why the Rand quickly pared steep losses that were wrough on it the moment the documents were published.

Despite this, total debt is now expected to stabilise at a level equal to a higher portion of GDP than previously thought, and not untill at least the 2023 year comes around either. It's not yet clear what Moody's, the last agency to still have South Africa as an "investment grade" credit prospect, will think of that.

"Some extra revenue has been squeezed out by not adjusting personal tax brackets for inflation and by imposing the carbon tax on fuel. Some of these gains have been given back by zero rating more items for VAT and by reducing the fuel levy," says Nedbank's Dykes

But Rand price action may also have been egged on by the government's proposals for righting the capsized ship that is national power utility Eskom, which is on its death bed due to revenue and cost challenges.

Eskom is only being kept alive by government guarantees of its debts, which have enabled it to borrow large sums of money. So much so that the company and its bloated  balance sheet are now a threat to the public purse.

The government is now on the hook for R350 bn (£21 bn) of Eskom's debt pile, which is equivalent to around 8.5% of national GDP. Although the company has only drawn on just more than R250 bn of guarantees.

"Eskom is being reconfigured. The utility will be split into three viable operating entities under a single state-owned holding company. The Eskom board is developing a sustainable operational plan for each business," says Mboweni.

The government says that after splitting Eskom up into a separate companies operating power generation, transmission and distribution businesses, it will invite "strategic equity partners" to participate in it with the provision of new capital and oversight.

Government is also set to provide around R23 bn of new funding each year to ensure Eskom can service its debts and continue to operate. That pledge has resulted in only an R6 bn increase in overall spending because the other funding has been "reprioritised" from elsewhere.

"On the expenditure side moves to reduce the numbers employed in government by attrition have been more than offset by regular large annual allocations to Eskom," says Dykes. "As a result the deficit figures are unflattering, but providing these are limited once‐off adjustments, the damage to public debt is not too severe. If this is just the start of a programme of debt relief for the utility then the conclusions are very different." 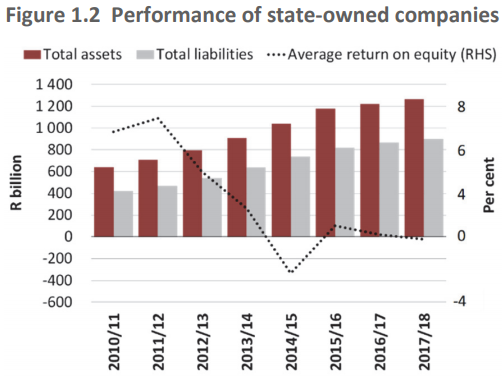 With a weak economy and high levels of poverty to contend with, at a time when a Presidential election is just months away, Wednesday's budget was always going to be a difficult and thankless task that saw government ministers caught between a rock and a hard place.

It's far from clear what Moody's will do about South Africa's investment grade credit rating at the next determination in March but the market response will to Wednesday's budget update suggests next month's decision could be a favourable one.

The Pound-to-Rand rate was quoted 0.12% higher at 18.35 after paring back an earlier 0.39% gain in response to the budget. The rate rose as high as 18.72 in the moments immediately after the budget's release.

"Government expenditure is projected to rise only in one year (versus MTBPS projections) to provide financial support to Eskom. This may be seen as credit negative by Moody’s, but as it is only one year it may be enough to stave off an actual credit rating downgrade (or even change to the outlook) for the year," says Annabel Bishop, chief economist at Investec Bank. 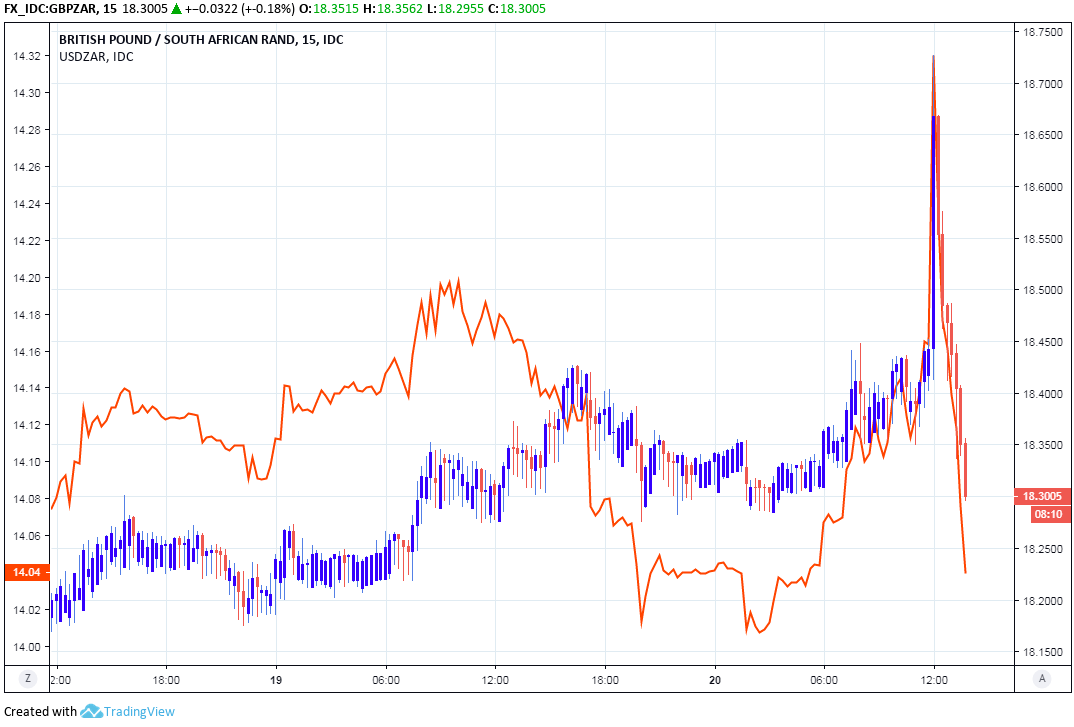 Above: Pound-to-Rand rate at 15-minute intervals, alongside USD/ZAR (organge).

Moody's gave South Africa a reprieve in March 2018 when it left the nation's credit ratings intact at Baa3, which is just about inside the "investment grade" threshold and only one notch above "junk status".

It upgraded the outlook from negative to stable at the same time but there has since been speculation the March 29 rating review will see it switch that outlook back to negative.

The agency said at the time it had been encouraged by a change in political leadership that came after Cyril Ramapahosa took over the presidency from Jacob Zuma.

However, the main reason it took heart from the transition is it hoped corruption would be routed from key institutions and struggling state-owned-enterprises would be fixed. That means a lot of what the agency does next month could come down to its assessment of the Eskom plan.

"We highlight the risk of a downgrade this year to Moody’s outlook on SA’s dual long-term debt (local and foreign currency) credit rating from stable to negative, but the Budget may do enough to avoid this. A negative outlook can indicate a rating downgrade within eighteen months," says Investec's Bishop.