- USD/ZAR break beneath May low clears path to new highs for ZAR.

- Commerzbank looks for April and February ZAR highs to be tested.

- Investec says 14.0 threshold will be tough nut for the ZAR to crack.

- But forecasts final quarter to see ZAR rise against both USD and GBP.

The Rand softened Wednesday but it's likely to return to its February highs against the Dollar over the coming weeks and months according to technical analysts at Commerzbank, who say the South African unit's recent break above its May high has now cleared the way for further gains.

South Africa's currency weakened for four months until early June due to concerns about the domestic economic outlook and whether the country will be able to retain its important 'investment grade' Moody's credit rating past November, but a change in the Federal Reserve (Fed) interest rate outlook has recently breathed new life into the Rand. 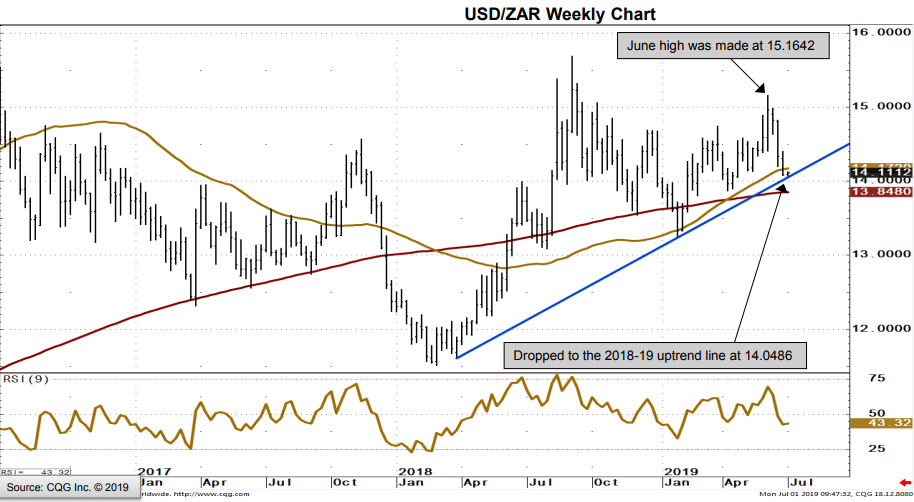 Above: Commerzbank chart of USD/ZAR rate, with technical indicators displayed.

American policymakers are worried about the prospect of a global growth slowdown coming back to bite the U.S. economy like boomerang after President Donald Trump's trade tariffs damaged the Chinese, other Asian and Eurozone economies last year.

This has got at least one of the 17 voting members on the Federal-Open-Market-Committee worrying that the Fed may have "overdone it" by lifting U.S. interest rates last December, especially as the bank's preferred gauge of inflation has fallen far beneath the 2% target this year.

Eight of the committee members hinted in June that they see at least one 0.25% rate cut as warranted before year-end, while financial have since begun to bet the bank will actually reduce U.S. borrowing costs by a total of 0.5% in 2019.

That about-turn on prior rhetoric and forecasts that suggested the U.S. cash rate would remain at a post-crisis high of 2.52% for years to come has weakened the Dollar and enabled many other currencies to win back ground previously lost to the greenback and the Rand broke above May highs as a result.

But rate cuts of the magnitude the market is expecting are far from a foregone conclusion, as was evidenced by FOMC voter James Bullard last week, who's normally the most 'dovish' member of the rate setting committee. Market disappointment following a July 27 Fed rate decision is a risk to the Rand.

"Only if a currently unexpected rise and daily chart close above the next higher 15.1642 June high were to be seen, would the September 2018 peak at 15.6945 be back in the picture," Rudolph says.

Rudolph, whose views are based on technical studies of trends and momentum on the charts, says the Rand should force the USD/ZAR rate below 14.0 this week. But local analysts at Investec Bank are more conservative in their outlook for the Rand, although for reasons are fundamental in nature, not technical. 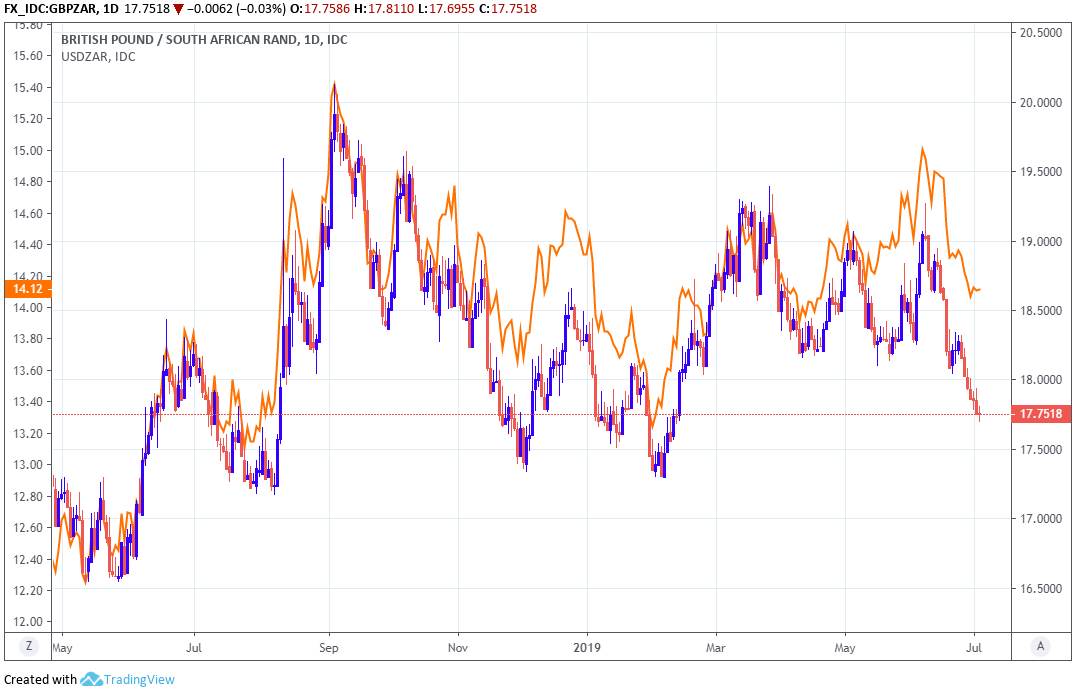 "R14.00/USD is a key resistance level, and the domestic currency will likely find it difficult to pierce it sustainably, without very strong momentum. We expect this could only be likely if the FOMC cuts its fed funds rate by 25bp, with the earliest interest rate meeting on 31st July," writes Annabel Bishop, chief economist at Investec, in a note to clients.

Bishop also says the third quarter of any year, which began this week for 2019, normally proves hostile to risk-sensitive assets such as the Rand. There are many reasons for this but if investor risk appetites wane over the summer period the Rand could find itself beaten back from its current highs.

Another escalation of the U.S.-China trade war would be enough to upset markets, although Presidents Donald Trump and Xi Jingping agreed at the weekend to avoid imposing further tariffs on each other for now and to resume their previously abandoned talks aimed at addressing U.S. concerns over "unfair" trading practices.

Similarly, any renewed hostilities between the White House and European Union would undermine the Rand's newfound appeal to investors. U.S. officials said this week they intend to target an additional $4bn of EU goods exports with tariffs due to a dispute over subsidies for Airbus.

However, U.S. and EU officials are in talks over the White House's main concerns about European trade practices, which are expected to roll on into the final quarter. This means any such escalation, if it does come, might not happen until the final months of the year.

"While the rand could see further strength this year, this may be more likely to be sustained in the last quarter, as global financial markets tend to be less risk averse in that period (the last and first quarters of the year. Longer-term the rand is expected to return to its purchasing power parity valuation," Bishop says.