The Dollar rebounded Wednesday after two influential Federal Reserve (Fed) board members attempted to talk the market down from betting that a significant interest rate cut will follow the July meeting, with one going as far as to say that such wagers are "overdone", offering respite to a beleaguered greenback.

Federal Reserve rate setter James Bullard said Tuesday that market expectations for a 50 basis point interest rate cut in July are "overdone", in an interview with Bloomberg News, less than a week after the U.S. central bank appeared to signal that a landmark shift in its monetary policy is in the pipeline.

Bullard is a renowned monetary policy 'dove' so is one of the Federal Open Market Committee voters who's most likely to favour a significant reduction in U.S. interest rates at any given time, but his message was loud and clear on Tuesday: Bullard thinks that such 'easing' would be unnecessary.

The comments were almost seconded by Fed Chairman Jerome Powell, who's been the subject of relentless criticism from President Donald Trump because of the four interest rate hikes announced by the Fed last year that the White House suggests have acted like a handbrake on the U.S. economy.

Powell told the Council on Foreign Relations, in a discussion about the economic and monetary policy outlook, that Federal Reserve interest rate setters should not overreact to short-term swings in market sentiment or individual economic data points.

"The case for somewhat more accommodative policy has strengthened, but we are also mindful that monetary policy should not overreact to any individual datapoint or short-term swing in sentiment," Powell told his interviewer. "I think it’s important to—not to overreact in the short term to things which may turn out to be temporary or transient." 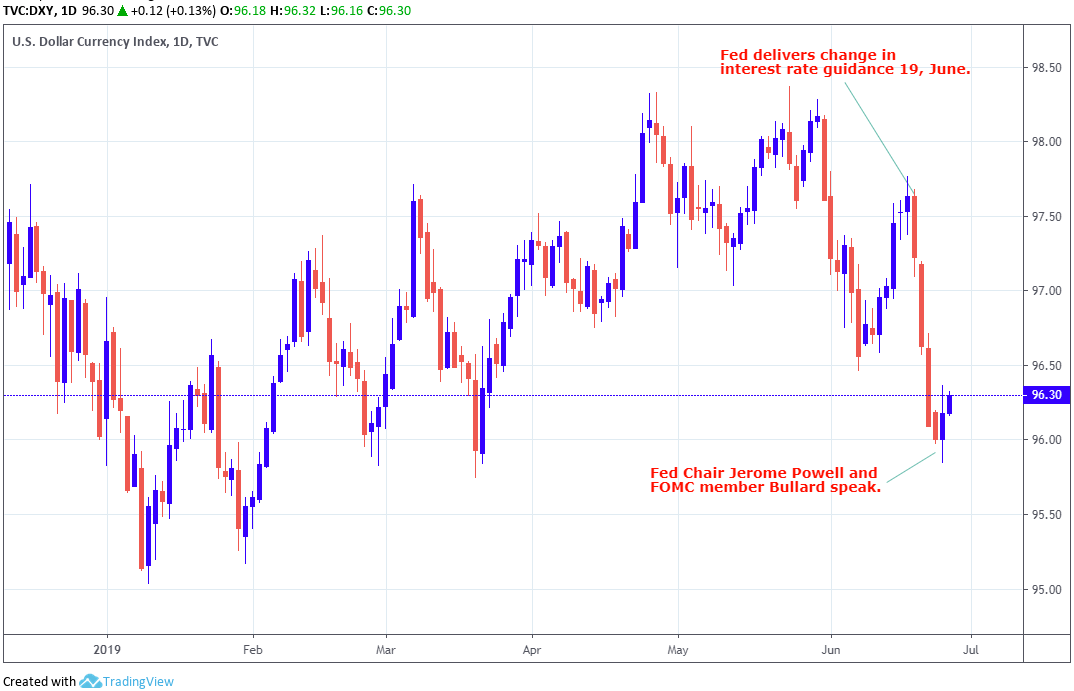 Last week's meeting saw Fed rate setters jettison from their dot-plot of forecasts, the last remaining interest rate hike that was pencilled in for 2020. They left the Fed Funds rate range unchanged at 2.25%-to-2.5% but eight of the 17 voters on the Federal-Open-Market-Committee suggested they now anticipate one 25 basis point rate cut before year-end.

Furthermore, Powell told the markets in an accompanying statement that the FOMC would "act as appropriate" to sustain the economic expansion, with a strong jobs market and inflation near its "symmetric 2% objective". The combination of the two led markets to become convinced the Fed will cut rates by 0.5% before year-end.

As a result, the Dollar Index fell 1.6% in the week to Tuesday evening and many analysts were saying it's still got further to fall during the weeks and months ahead, but that market response has now been moderated and analysts may be adjusting their forecasts and guidance for clients.

Markets had for some time already bet that 2019 and 2020 would see the Fed rate hiking cycle and the Dollar uptrend that began in April 2018 brought to an end, but the May escalation of the U.S.-China trade war encouraged an increase in those bets.

"Bullard's comments to Bloomberg yesterday had more impact on markets than Fed Chair Jay Powell's Q&A," says Kit Juckes, chief FX strategist at Societe Generale. "The futures market duly lowered the chance of a 50bp move from 38% to 21% but more striking perhaps was that while the dollar has bounced modestly, and 2-year note yields are 3bp high this morning, the S&P 500 index is down 1%. Whatever else, the markets' addiction to easy money is intact." 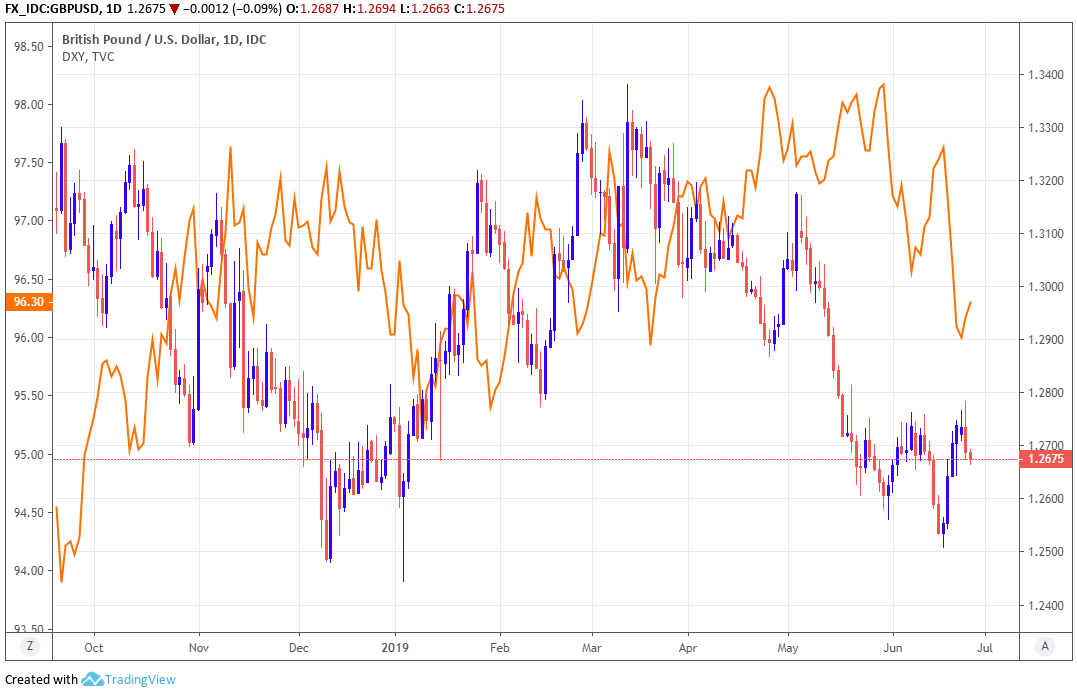 The Federal Reserve raised interest rates nine times between the end of 2015 and the end of 2018, taking the top end of the Fed Funds rate range up to its current 2.5% level. However, pricing in the overnight-index-swap market now implies as many as three rate cuts could be likely before the end of 2019.

The core personal-consumption-expenditures price index, which is the Fed's preferred measure of U.S. inflation, has been below the 2% inflation target ever since December 2018 and was reported at just 1.6% in April. That might be reason enough for the Fed to rethink its interest rate policy.

"Jerome Powell indirectly warns those who take several rate cuts for granted as he still seems in no hurry to cut rates prematurely. Given that James Bullard set the ball rolling a few weeks ago, his statements were also rather surprising. We therefore continue to expect a maximum of two rate cuts by the FED in 2019," says Marc-Andre Fongern at MAF Global Forex. 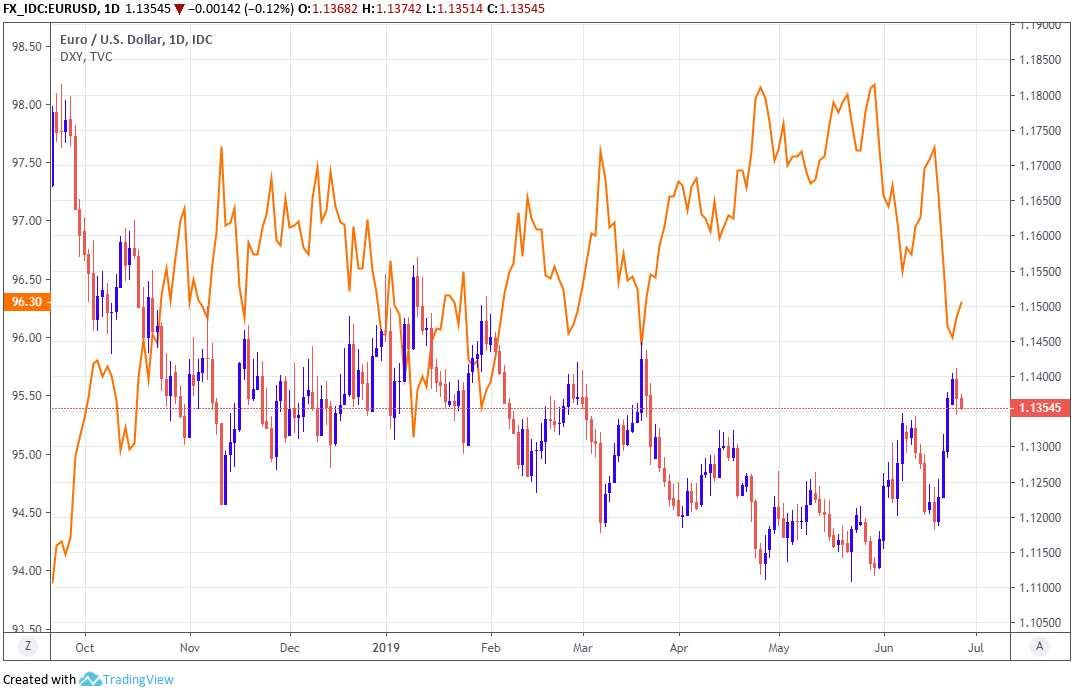 Powell's comment about it being important not to overreact to "things which may turn out to be temporary or transient" could have been a reference to this year's decline in the personal consumption expenditures measure of inflation, and if it was, the Fed Chair could have a point.

After all, the official measures of U.S. inflation still show price pressures testing the Fed's target of 2%. Headline inflation dipped from 2% to 1.8% in May but core inflation, which ignores some items like energy, alcohol and tobacco, fell only to the 2% threshold. It was 2.1% previously.

This means cutting U.S. interest rates steeply after the July meeting would risk seeing the Fed with egg on its face in a few months or quarters time, because weakness in a few monthly readings of inflation could easily go into reverse later this year and potentially oblige the bank to lift interest rates again.

"What is a much more important is the question as to why the Fed is cutting interest rates at all,"  says Ulrich Leuchtmann, head of FX strategy at Commerzbank. "It is mainly the Fed-bashing tweets from the White House that are driving the Fed to cut interest rates. Yesterday Powell defended his independence much more explicitly than before. That too is likely to be a reason for the slight USD recovery."

Leuchtmann says there are very few reasons for the Fed to actually want to cut its interest rate other than pressure from the White House as well as the financial markets. He suggests independent central banks should not respond to political pressure to move interest rates in one direction or the other and that the market's desire to see rates lowered is based on flawed reasoning.

"Sure, inflation has not been at the levels the Fed would like to see, but that's kind of normal and didn't prevent the Fed from hiking. The only reason for rate cuts would be that the financial market expects such cuts (for irrational reasons?!) and the Fed has to deliver to prevent stress on the financial markets," Leuchtmann writes, in a note to clients.