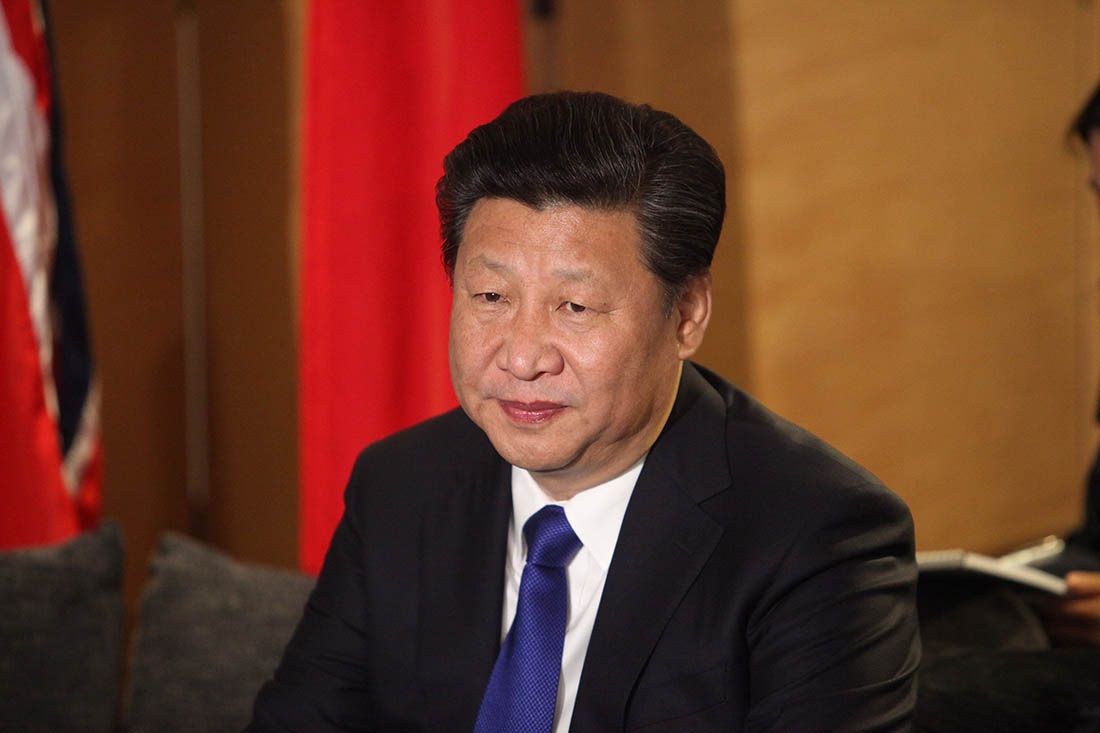 - MUFG says gains are temporary as obstacles to a lasting deal remain.

- But Pantheon says U.S.-China trade deal likely on the way this summer.

The Dollar surged to the top of the G10 league table Monday after Presidents Donald Trump and Xi Jingping agreed a ceasefire in the trade war between the world's two largest economies, although some in the market say the newfound peace may only be temporary.

President Trump agreed at the weekend's G20 summit in Osaka, Japan that an imminent 25% tariff intended to apply to the rest of China's annual exports to the U.S. would be suspended and American companies will now be allowed to resume their business with Huawei.

In return, Chinese leader Jinping agreed to return to the trade negotiating table and to buy large amounts of U.S. agricultural products ahead of any deal over the world's second largest economy's "unfair" trading practices.

The accord provides much-needed breathing room for the global economy, which has had its wings clipped over the last year by escalating hostilities between the world's two largest economies. It also comes as a reprieve for the U.S. economy, which has recently shown signs of succumbing to the effect of tariffs and the global slowdown.

"This highlights the recent dynamic between the US dollar, Fed, and trade tensions – as tensions have eased, market expectations for Fed dovishness have followed suit and the dollar is trading higher on the back of this. However, we expect this boost to the dollar is likely to be short lived as various obstacles remain on the trade front and the Fed easing in July remains a done deal," says Lee Hardman, a currency analyst at MUFG.

President Donald Trump recently lifted from 10% to 25%, the tariff on $200 bn of U.S. imports from China and threatened a 25% levy for all of China's U.S trade. He also used a Commerce Department 'blacklist' in an attempt to shut Huawei out of U.S. and global markets, which marked a step-change in the trade dispute that threatened to turn a tariff fight into an all-out economic conflict. China retaliated against that by devising its own "unreliable entity list".

The Dollar index was quoted 0.28% higher at 96.57 during the morning session Monday, leaving it up 0.57% for 2019, after the greenback rose against all of its G10 rivals except the Japanese Yen.

Investors have bid the Dollar higher at the start of the new week because the detente is seen easing pressure on the Federal Reserve (Fed) to cut its interest rate, although a full July cut was still priced into the Dollar Monday morning.

"The whole global economy is going to struggle if anything happens to the US and China. And all this would be ahead of the 2020 election, which is already underway if one follows the Democratic party debates. As such, it was always going to be in the best interest of both parties to smile and shake hands," says Michael Every at Rabobank. "Nothing has been achieved or conceded at all except an agreement to restart talks and the postponement of the final stage of tariff escalation to a blanket 25%."

Markets had bet increasingly heavily of late the central bank would begin cutting U.S. borrowing costs at the end of this month, although the wagers have lessened slightly since Fed 'dove' James Bullard said last week the 50 basis points of cuts markets were looking for was a bridge too far for the bank.

However, some analysts are unconvinced that the weekend's G20 developments are a good enough reason to begin buying the Dollar again, although others are suggesting the ceasefire could mark the beginning of the end of the so-called trade war between the world's two largest economies. 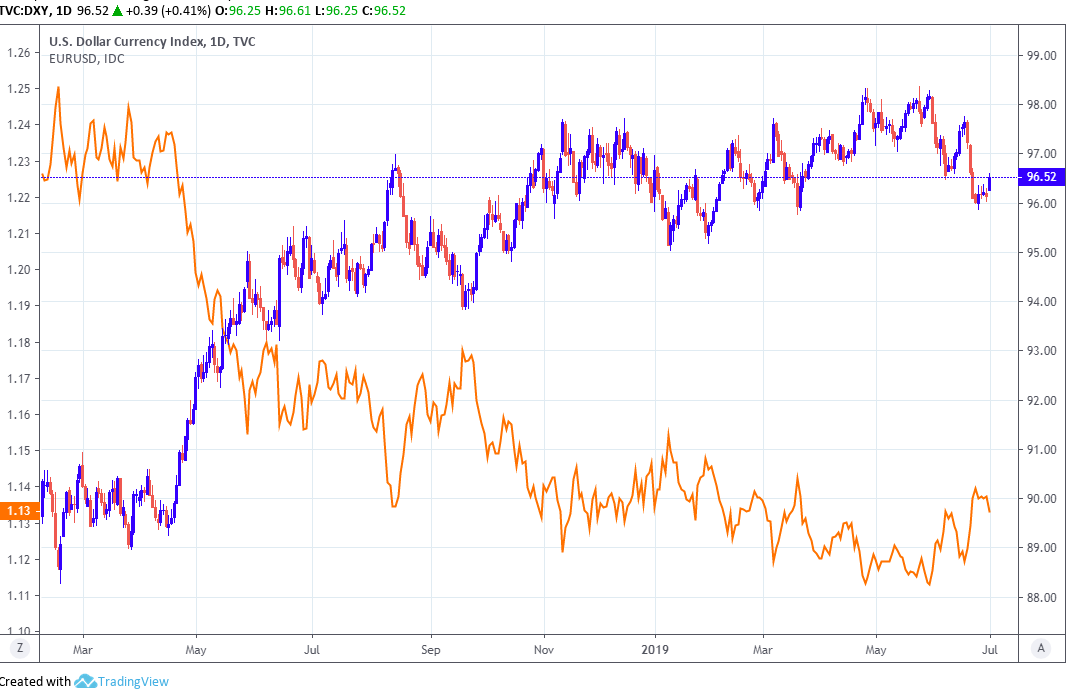 "The Fed has indicated that it will be watching “very near term” data closely to guide its rate path, but barring extraordinary outperformance in key US data over the next few weeks, the Fed is almost certain to cut rates at the end of the month and this expectation should cap further dollar performance," MUFG's Hardman writes, in a note to clients.

U.S. policymakers left the Fed Funds rate range unchanged at 2.25%-to-2.5% in June but eight of the 17 voters on the Federal-Open-Market-Committee suggested they now anticipate one 25 basis point rate cut before year-end.

Furthermore, Chairman Powell told the markets in an accompanying statement that the FOMC would "act as appropriate" to sustain the economic expansion, with a strong jobs market and inflation near its "symmetric 2% objective". The combination of the two led markets to become convinced the Fed will cut rates by 0.5% before year-end.

However, Powell has since said rate setters should not overreact to short-term swings in market sentiment or individual economic data points. That could have been a hint that the bank will not be pushed into cutting rates by market fears over the trade war or a handful of below-target readings of the bank's preferred gauge of inflation.

James Bullard, who's a renowned monetary policy 'dove' and so is one of the Federal Open Market Committee voters who's most likely to favour a significant reduction in U.S. interest rates at any given time, said last week that a significant easing of U.S. monetary policy would be unnecessary.

But MUFG has long forecast the Dollar would decline this year as a result of slowing U.S. growth that forces the Fed to begin reversing the interest rate hiking cycle that helped drive the Dollar index some 4% higher in 2018. 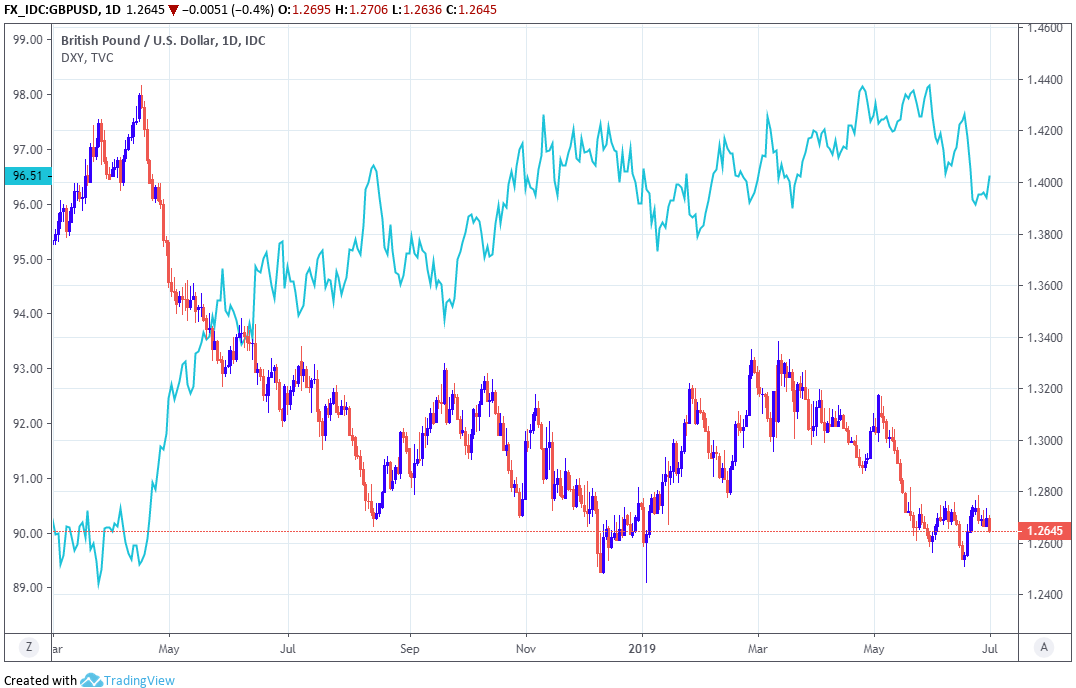 MUFG now says Monday's gains will prove short-lived. The Rabobank team is also sceptical about how long the trade truce will last for. But others have different ideas about the likely path ahead for both the U.S. economy and Federal Reserve.

"We're assuming these developments will trigger a rally in stocks and a sell-off in Treasuries, given that Fed Chair Powell has identified the trade war as the key "cross-current" threatening the economy. And if the domestic data are as strong as we expect over the next few weeks, the new impetus to the trade talks ought seriously to raise the question of whether the Fed will cut rates on July 31. A month is a long time in markets," says Ian Shepherdson, chief U.S. economist at Pantheon Macroeconomics.

With the trade war seemingly on hold and the U.S. data calendar for the week ahead gridlocked with important economic reports for the month of June the market focus could well shift back to fundamentals in the days ahead.

First up is June's Institute for Supply Management manufacturing PMI survey, which is important given that it's the manufacturing surveys that have suggested most strongly of late that the economy is struggling.

Consesnus is for the index to fall from 52.1 to 51.3 when it's released at 15:00 Monday, although Pantheon's Shepherdson says his model is pointing to stability in the benchmark survey the U.S. manufacturing industry.

He's also upbeat about the inflation outlook after the personal consumption expenditures (PCE) price index, which is the Fed's preferred gauge of inflation and was released last week, picking up strongly for a second time running.

"We'd be very surprised to see it mirroring the steep drops in the headline Philly Fed and Empire State indexes. Our model points to little change from May's 52.1, but the model has overstated the index in recent months so prudence dictates that we look for it to dip to about 51," Shepherdson says. "May's second straight solid increase in the core PCE deflator added weight to the idea that the run of very soft readings in the first quarter was due mostly to short term factors."

Any further uptick in the PCE index during July might force financial markets to reconsider the outlook for Fed interest rates, offering support to the Dollar. However, this week the most important item on the agenda is the most recent nonfarm payrolls report.

"We expect payrolls to rebound by about 160K, after May's very modest 75K increase. Hiring plans weakened after the plunge in stock prices in Q4 but have since rebounded substantially; payrolls will follow suit," Shepherdson says.