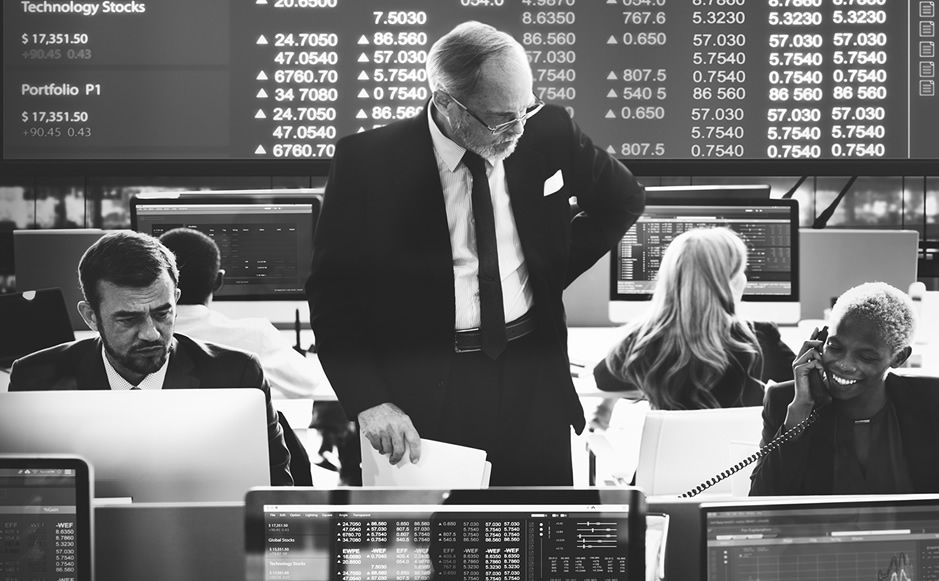 The Pound-to-Dollar exchange rate may be able to eke out a small gain in 2018 suggest fresh forecasts from Swiss bank UBS, although this is more the result of a dire outlook for the greenback than it is about strength in the UK currency.

Indeed, UBS forecasts show that against the Euro, the Pound's prospects are not promising with declines in the region of 7.0% expected for 2018.

Analysts argue the US currency faces a series of headwinds that, in almost all circumstances, point to lower levels against most other G10 currencies in the year ahead.

“With the long end of the US curve in-line with the Fed's terminal rate, there is less room for the market to push overall US yields much higher and boost the dollar,” says Daniel Waldman, a global macro strategist at UBS.

What matters most for the greenback in the year ahead, according to Waldman, is market perceptions of the extent to which the Federal Reserve can continue to raise US interest rates over the course of the current economic cycle. But there are also other factors that will exert influence over the greenback during the coming quarters.

“Consistent with our views, the broad rebound in global growth in 2017 left the Dollar weaker against much of the G10,” Waldman says. 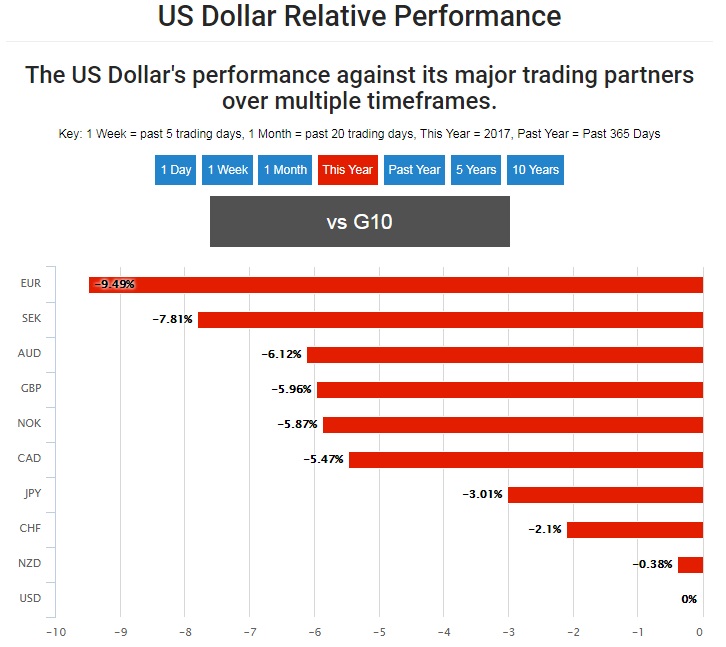 US Dollar performance relative to G10 counterparts in 2017.

The Dollar’s status as the international reserve currency and a safe -haven means it can often rise during times of stress, while the price of everything else is falling, although this is a double edged sword.

“Going forward, as the global recovery explores its 'room to grow', the Dollar should continue to depreciate,” the strategist adds, before citing a number of factors that lend additional support to his bearish Dollar view.

During global economic upswings, the Greenback can quickly fall from favour with traders as investors become more willing to take risks and funnel money into exotic assets further afield. UBS economists forecast global GDP growth of 3.8% in 2018 and 2019, up from the 3.1% seen in 2016.

“First, the US recovery no longer stands out compared to the recovery in the rest of the world,” Waldman notes. “Second, we think the hang-over from the "decoupling" years has left the dollar expensive on a number of metrics.”

UBS econometric models suggest the Dollar is between 10% and 15% overvalued while International Monetary Fund and central bank data sets show international investors have continued to build a disproportionately large position in US Dollar denominated assets during 2017. 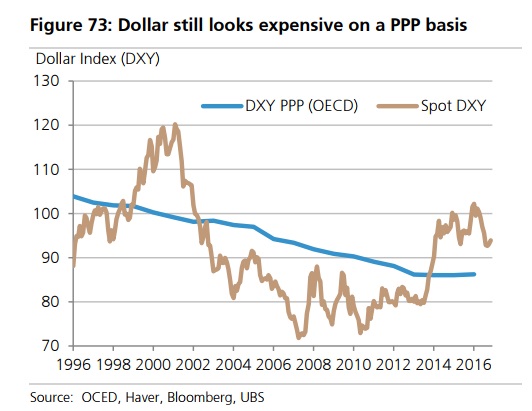 “Foreign holdings of US assets (a liability for the US) have appreciated disproportionally relative to the depreciating value in (and income from) US-held assets abroad,” says Waldman.

One force behind this trend has been an ongoing trend among American investors, who have continued to hold a substantially underweight position in European government bonds ever since the debt crisis, something Pound Sterling Live reported on in detail during September.

“This has led to the biggest deterioration in the US net international asset position vis a vis where it should be based on the accumulation of current account deficits,” says Waldman.

Another factor, less directly connected to Waldman's topic but still relevant to the greenback's trajectory, is global central bank buying of US Dollars.

The Dollar’s share of central bank foreign exchange reserves sits at 63.79%, according to the latest International Monetary Fund COFER data, and has increased during every quarter in 2017.

It is disproportionately represented in central bank currency holdings, particularly as America’s share of the global economy is in long-term decline, given the rise of the emerging world. 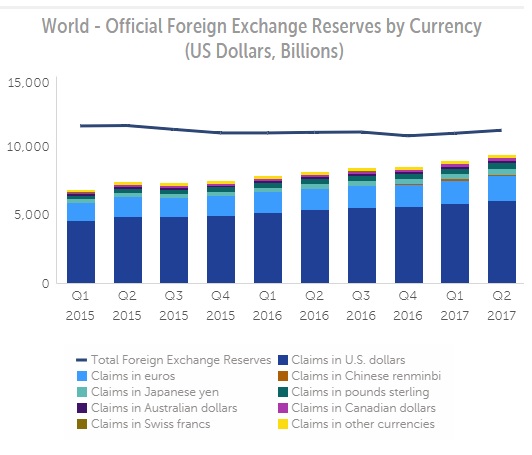 Any unravelling of this imbalance would mean sustained downward pressure on the US Dollar over time. Pound Sterling Live reported on the multitude of long term pressures on the Dollar in detail in October.

“Third, upcoming hikes by the Fed, one of the last key anchors to dollar-bullish narratives, are likely to have diminishing and short-lived implications for the USD,” Waldman says.

The opposite is true across the Atlantic in Europe and elsewhere in the world. Given there are two sides to every currency trade, this has negative implications for many Dollar pairs, particularly if markets become more willing to bet on future interest rate rises in the UK, Europe and the Antipodes.

“Indeed, European yields remain well below fair value, as ECB policy has prevented them from matching relative improvements in the labour market vs the US,” Waldman says.

UBS forecasts the Pound-to-Dollar rate will sit at 1.32 around the end of 2018, an upgrade from its earlier prediction of 1.29 and a level that is above the current market price.

That said, the likely gains for the Euro-to-Dollar rate are even greater, with Waldman and his team forecasting a move up to 1.25 by the end of the coming year.

Meanwhile, the greenback will probably fall by close to 6% against the Australian Dollar, with the AUD/USD rate being forecast to sit around 0.81 by the end of 2018.