New analysis from Deutsche Bank suggest the US Dollar is in trouble.

The US Dollar is the worst performing currency of the past month in the G10 space with the New Zealand Dollar clinching the wooden spoon.

But, the Greenback takes the accolade for worst performer of 2017. The picture is clear; the US Dollar is struggling.

The underpeformance is deserved according to a new analysis of global financial markets conducted by Deutsche Bank, and the situation is set to get worse for the Greenback.

One of the drivers of the Dollar’s recent underperformance appears to be the market’s apparent belief the US Federal Reserve will not raise interest rates in December.

This dynamic is likely to continue playing negative for the US currency.

“The market continues to refuse to price additional rate hikes from the Fed, a phenomenon we have termed zombification. This is not about whether the FOMC will raise rates in December but a broader question of what will happen beyond,” says George Saravelos, Strategist with Deutsche Bank in London.

For Saravelos, the Dollar-Fed story is not about whether the Federal Reserve will raise rates in December but a broader question of what will happen beyond.

Saravelos believes the Fed will resist aggressive interest rate rises in 2018 as many of the members of the decision-making body - the FOMC - will be replaced by Donald Trump.

“Whoever is appointed, there may be a high bar for making big policy change in H1 of next year,” says Saravelos.

Furthermore, Deutsche Bank believe that because Fed Funds are approaching neutral, the more the Fed hikes, the closer we approach the point at which the Fed will stop anyway. 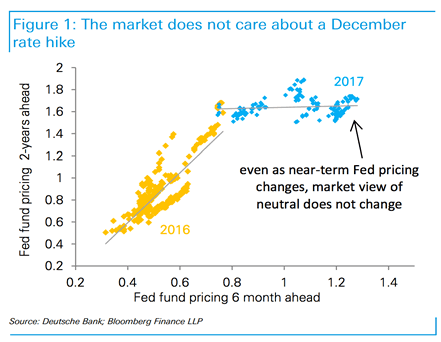 “This perversely leads to rate hikes easing financial conditions because it makes it more likely that the Fed will then stop. It also makes the dollar asymmetrically reactive to a dovish versus hawkish Fed,” says Saravelos.

There are other reasons why Saravelos believes “the Dollar is in trouble.”

“The FX market is undergoing a fundamental shift in drivers. It is no longer been driven by relative monetary policy expectations but an adjustment to flow imbalances that have built up through the implementation of highly unconventional global monetary policy,” says Saravelos.

“Part of this imbalance is a structural underweight in European assets which we have written about in the past. More broadly however, Americans are hugely underweight in their investment allocations to the rest of the world. 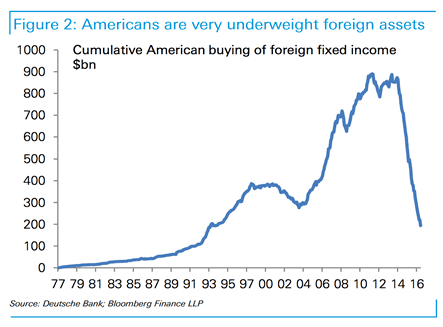 “Over the last few years Americans have liquidated close to the entirety of their foreign fixed income portfolio and are likely in the process of re-allocating back to the rest of the world.”

“The shrinking in US-world relative growth differentials and ongoing political turmoil in the US may have helped catalyse this trend.”

“We struggle to identify conditions that would sustainably shift the dynamics described above and would not fade recent dollar weakness.”