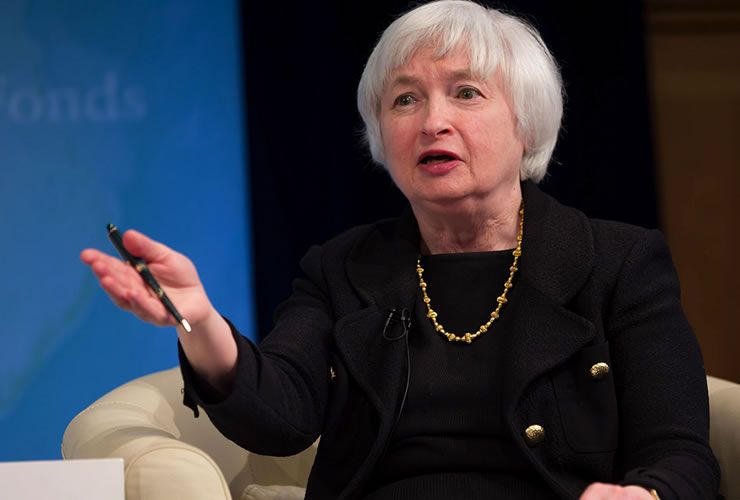 The dollar could recover over coming months as overly-pessimistic markets are forced into accepting up to two Federal Reserve interest rate rises in 2016 it is argued.

Dollar weakness has been arguably the single most important feature in global FX over the course of 2016.

With the next appearance of the US Federal Reserve’s policy setting committee (the FOMC) due on Wednesday we ask if the trend of a lower dollar can continue.

The lifeblood of a stronger dollar is the promise of higher interest rates which in turn imply a higher return on capital for both domestic and global investors.

The desire for US assets in turn bids up the dollar; a process that has been happening since around mid-2014 when the US dollar basket started its climb on the back of expectations for US Federal Reserve rate hikes.

The turn in fortunes for the Greenback occurred at the start of the year when markets realised Chair Janet Yellen and her team would struggle to deliver the four interest rate rises in 2016 that had been implied at the December meeting.

Concerns about global headwinds and ‘asymmetric’ policy options are blowing strongly in the face of the FOMC’s desire to raise rates.

“Financial conditions in the US have tightened significantly and we no longer expect the Fed to hike rates in 2016 or 2017,” says a note on the matter from BNP Paribas, “this implies a much smaller USD appreciation versus the EUR, JPY, and CHF than we previously forecast, implying the USD bull market is entering a long pause.”

Futures traders have now pushed back the timing of the next projected rate increase all the way to mid-2017, while at the same time net speculative positions on the US dollar index have fallen to their lowest level since June 2014.

BNP Paribas agree and have warned clients that 2016 is unlikely to see any rises in interest rates, further underpinning the USD-negative theme we have become accustomed to.

But there is a danger that markets are getting too negative on the dollar, and this is the number one risk seen heading into the mid-week session and the FOMC event.

Could this negative sentiment concerning the outlook for US interest rates change on Wednesday, thereby turning fortunes for the dollar too?

If that date for the next rate rise can be brought forward from mid-2017 then we certainly could see the USD catch a bid.

These Headwinds Could Turn into a Tailwind

The dollar’s decline and persistently low interest rates fly in the face of an economy that continues to deliver jobs growth at an above-potential rate.

Given, other components of the economy are showing mixed readings, but on the labour front slack is being diminished and questions will be raised as to just how long the Federal Reserve can go on ignoring it.

It is for this reason that economists at CIBC Markets reckon the very driver of a weaker US dollar thus far in 2017 could soon prompt a notable recovery.

“While a June rate hike is no longer on the table, Fed officials should have enough evidence to inch rates up again by the end of summer,” says a note on the matter from the Canadian bank.

Given the market’s pessimistic starting point, that will cause a broad repricing and drive the US dollar firmer one more time.

Markets, wary of this scenario, could already be acting as we have seen the headline EUR/USD exchange rate start to edge lower off recent highs.

“We retain a bear bias here, after the market rejected 1.1465 key resistance. Rate spreads and forward points suggest we are out-of-line at current levels and should gradually work back towards 1.10-1.08,” says Robin Wilkin, a technical strategist at Lloyds Bank concerning improving sentiment towards the dollar.

The recovery in the Greenback is however forecast to be short-lived as CIBC expect the currency will face global headwinds of a different type.

“As the year winds down, other developed economies will begin gaining speed as a result of past stimulus. With the US no longer standing out as the lone bright spot in the global economy, its trade deficit will be viewed in contrast with the surpluses seen in places like the euro area,” say CIBC.

As a result, the US dollar will lose ground against a variety of its global counterparts heading into the end of this year and remain at those more subdued levels throughout 2017.