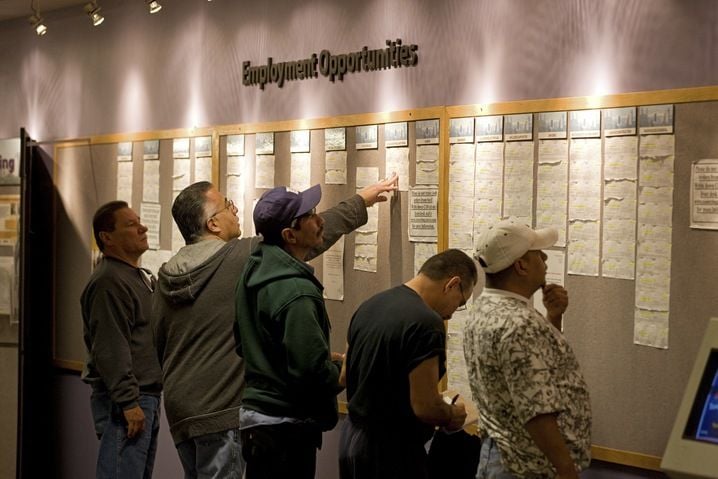 The pound to dollar exchange rate remains under pressure in the wake of mixed non-farm payrolls data out of the United States.

To be fair, sterling has been in sell-mode through the course of the past 24 hours and the outcome of the numbers were never likely to deter investors from selling the pound.

But, what we do know is that the US dollar is unlikely to find much support going forward.

The headline non-farm payroll number showed 195K people found work in March, analysts had forecast a reading of 197K, so they were on target there.

Good news came in the form of the average hourly earnings which grew 0.3%, better than the previous month's -0.1% and better than forecasts for 0.2%.

“When Fed Chair Janet Yellen signalled that her future monetary policy would be data dependent, all eyes turned toward today’s non-farm payroll result to see if there would be good news from the off," says Dennis de Jong at UFX.com, "Although down on February’s figures, March saw a better than expected number of jobs added to the US economy, while employment rates are steady and wages are rising despite global uncertainty."

de Jong suggests that with the world’s largest economy really starting to pick up steam, many observers are expecting another interest rate hike sooner rather than later – as long as inflation remains under control.

Kathy Lien at BK Asset Management warns that non-farm payrolls is only important when it can be a game changer for Federal Reserve policy but Janet Yellen made it very clear that they have no intention of raising interest rates in April and unless there's significant improvements at home and abroad, rates will remain steady in June as well.

NBC Correct in Their Downside Forecast

Disappointment is what was anticpiated by National Bank of Canada’s, Krishen Rangasamy, who ahead of the report issued a note arguing a lower-than-forecast result would catch investors unawares.

His forecast is based on the extreme divergence which has grown between NFPs’ and another major gauge of employment in the US ADP Employment Change.

Revisions to February were minor at -9k, taking this measure of jobs growth in the month to 205k.

Whilst the two generally track each other quite closely over the long-term, they can diverge quite sharply over the short term.

This is what happened in the fourth quarter of 2015 when ADP’s underperformed NFP’s by an average of 100k per month in October and November.

However, these sharp divergences usually correct themselves in the following quarter, according to Rangasamy, with one or other of the metrics ‘snapping back' into the range.

This means there is a high probability NFP’s will be substantially lower in March, in order to correct the divergence of the previous quarter.

“The gap between the two surveys in Q4 was the largest ever recorded (see chart below). Historically, such a gap tends to be corrected the following quarter. In other words, the ADP (roughly +600K in Q1) should in principle be outperforming the private NFP (+410K in the first two months this year) in the first quarter of 2016.” Says NBC’s Rangasamy. 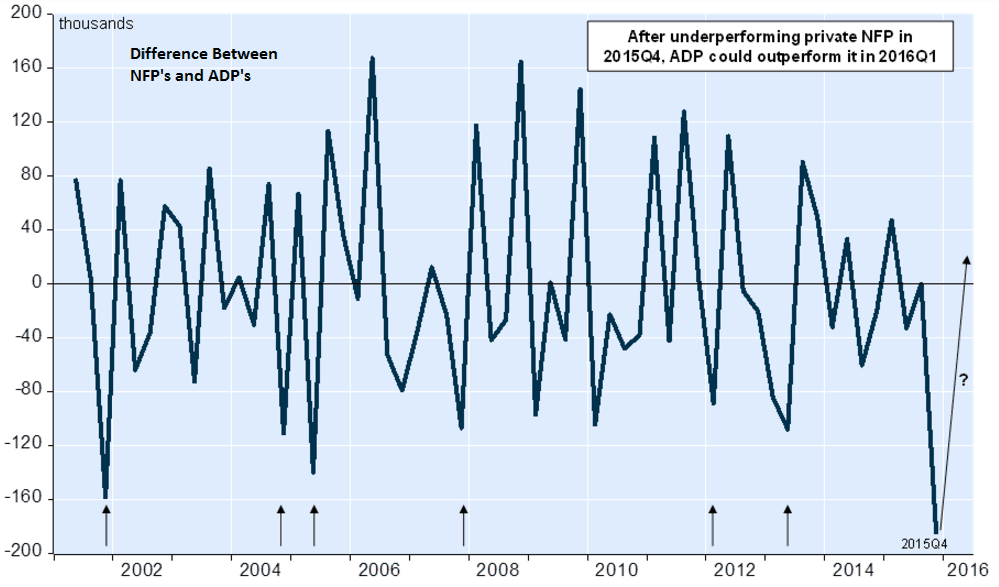 NFP’s are likely to be below ADP’s in Q1, but in order for that they would need to add up to lower than the ADP total for Q1, which we now know is 600k.

This is below the consensus 210k figure.

If this analysis is correct, we could well see sterling end the week higher than its US counterpart.