The tone of his address could offer fresh interpretations for the market as to the outlook of U.S. monetary policy and therefore the Dollar might react.

The testimony comes at a time of tightening ranges in foreign exchange markets, encapsulated by price action in the Pound-Dollar rate: 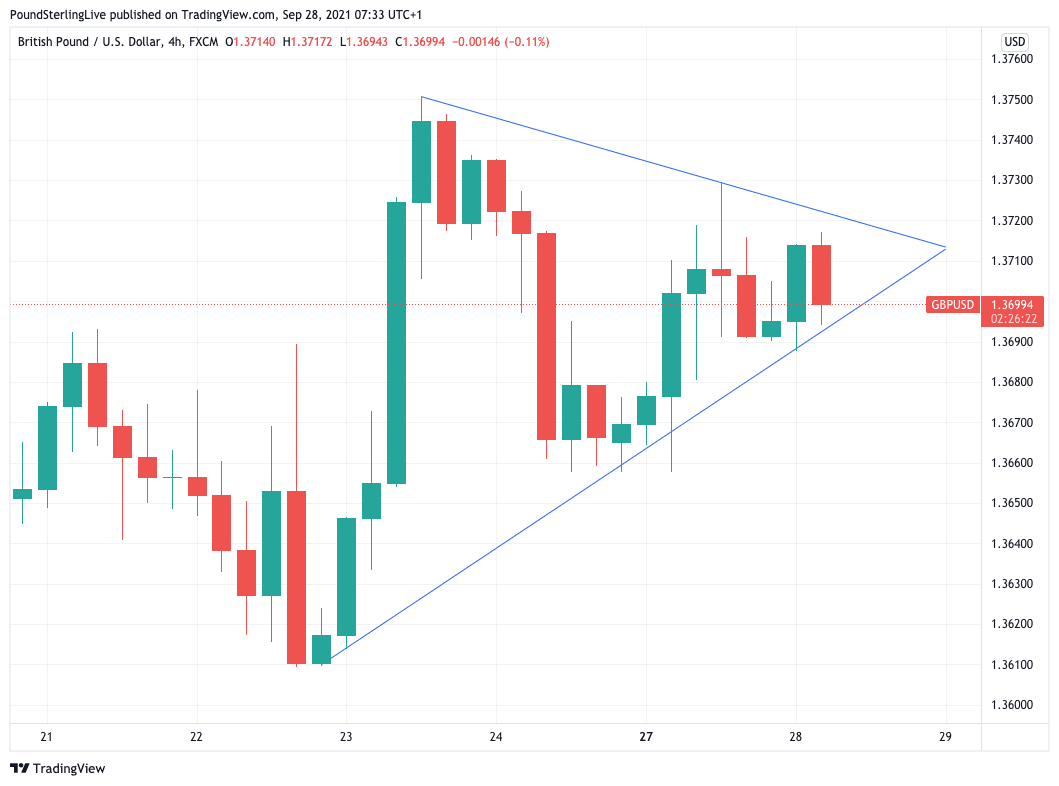 Above: The Pound-Dollar exchange rate is becoming increasingly constricted in its range. Will it break to the upside or downside?

"Any comments from the FOMC members this week indicating earlier or more aggressive tightening cycle could break the current FX ranges," says Marek Raczko, an analyst at Barclays.

A preview of his address seen by media reveals Powell will say the causes of the recent rise in inflation may last longer than anticipated.

"Inflation is elevated and will likely remain so in coming months before moderating," Powell will say, adding:

"As the economy continues to reopen and spending rebounds, we are seeing upward pressure on prices, particularly due to supply bottlenecks in some sectors."

Nevertheless he is expected to stick to the view that the causes of high inflation will prove fleeting:

"These effects have been larger and longer lasting than anticipated, but they will abate, and as they do, inflation is expected to drop back toward our longer-run 2 percent goal."

Expect U.S. senators to question him on the timing of an expected decline in inflation back to the 2.0% goal: there might be growing unease that inflation stays high for a protracted period and they will want to know what the Fed intends do about it.

For his part, Powell has already signalled a willingness to move given the Fed's September policy meeting proved to be more 'hawkish' than the market was expecting.

Last week the Fed sent a strong signal that it will begin reducing its quantitive easing in November, with Powell noting broad support for a timeline that would complete the process by mid-2022.

The market is now alive to the view that a rate rise might follow in 2022 and are more certain that a number of rate rises will take place in 2023.

But Barclays says the scope for a big move higher in the Dollar remains limited given market pricing has already accounted for a 'hawkish' shift in Fed hike expectations: i.e. rate hikes are now largely accounted for by Dollar exchange rates.

"We don’t think this timeline should be overly disruptive for the risk backdrop, as the market is already pricing in one hike by the end of next year, suggesting limited room for a further upward repricing of short-end US rates," says Raczko.

If the Dollar fails to rise the sideways dance in FX markets could extend.

But the Pound could take advantage of Dollar inertia, given the momentum it has carried into this week.

The admission by Powell that inflation is proving more enduring than previously anticipate is eerily similar to that given by the Governor of the Bank of England on Monday night.

The Governor said in a speech that while the current round of inflation had its root in supply bottlenecks there was a risk that it raises inflation expectations.

In short, prolonged inflation alters the behaviour of consumers and business and prompts further inflationary effects as consumers demand pay rises and businesses rice the prices of goods and services.

"The monetary policy response, if we need to make one, to the inflation pressure should involve Bank Rate not QE. There is no reason to beat about the bush on this point," says Bailey.

Bailey's latest comments are consistent with a view UK interest rates are likely to rise by at least February 2022, well ahead of both the European Central Bank and the Fed.

This dynamic has been credited with the ongoing support Pound exchange rates are currently enjoying, but it will take rate hike expectations to rise even further to propel the Pound back to 2021 highs against the Dollar.

Motor fuel shortages and surging energy prices could be one catalyst to shift Sterling rate markets as economists at Citi say that while this is not a unique problem to the UK in a global context, the impact on UK inflation might be more pronounced than elsewhere.

The market seems to be of a mind that if the UK were to suffer greater levels of inflation it stands that the Bank of England must be ready to do more than other major central banks.

"The dramatic headlines are not weakening the pound so far. This is mainly due to the Bank of England, which is increasingly emphasising its willingness to fight higher inflation risks (which supply bottlenecks also entail) with interest rate hikes if necessary," says Esther Reichelt, FX and EM Analyst at Commerzbank.

There is now a risk that the UK enters a period of stagflation that sees low growth rates and elevated inflation.

But for the Bank of England, it seems elevated inflation levels can no longer be ignored.